Boris Johnson and Matt Hancock were up with the larks this morning as they got their daily dose of exercise.

The Prime Minister continued his health kick as he worked up a sweat performing lunges, stretches and sprints with his personal trainer Harry Jameson and dog, Dilyn.

And Health Secretary Matt Hancock got the week off to a similarly healthy start as he beamed for the cameras while running through the Capital today.

This comes after the Premier suggested that lockdown exercise rules could be relaxed to ease the pressure on people’s physical and mental health.

Boris Johnson has asked officials to draw up options for a slight easing of the rules, which currently limit people to meeting one other person for outdoor exercise once a day. 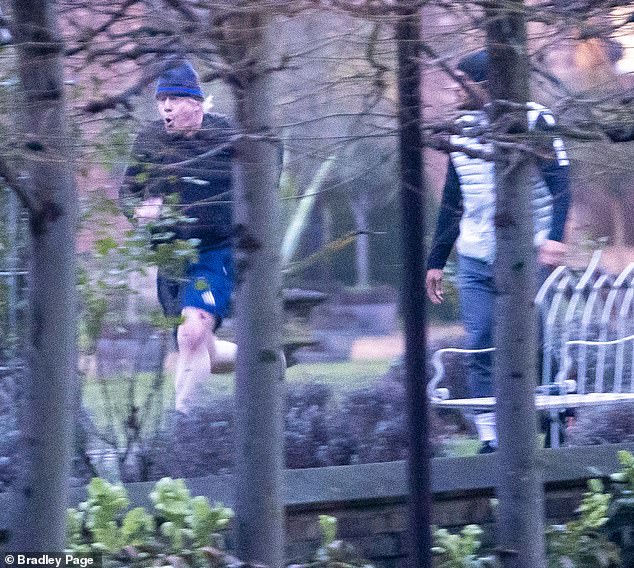 Racing into lockdown: The Prime Minister performed a series of sprints and lunges this morning 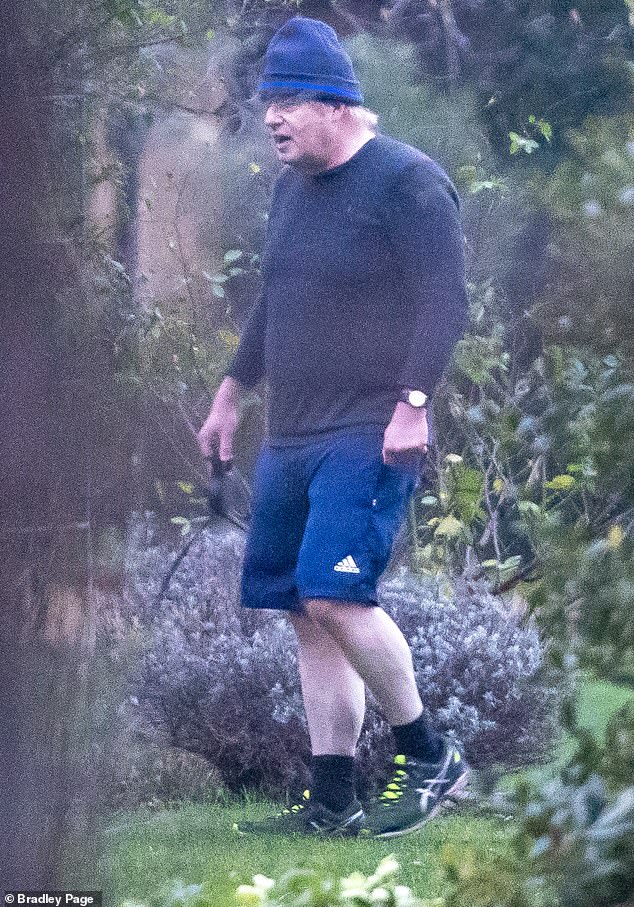 This comes after the Premier suggested that lockdown exercise rules could be relaxed to ease the pressure on people’s physical and mental health. Pictured, Boris this morning 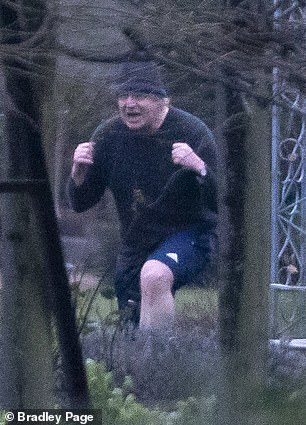 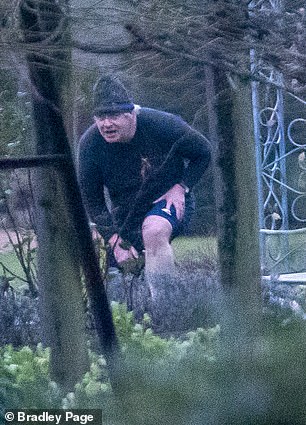 Boris donned a woolly hat and Adidas shorts for the early morning session with his personal trainer.

After he was put through his paces, the PM visited a Covid vaccination centre in Batley, West Yorkshire.

Borish previously revealed he had lost more than a stone in weight in the wake of his coronavirus scare and urged Britons to join him in getting fit to ward off the worst of the disease.

And with the lockdown now set to last for at least nine weeks, the Prime Minister is said to be increasingly concerned about the impact of the restrictions on people’s physical and mental wellbeing.

Last week he announced that the lockdown would continue until at least March 8, with schools set to be the first thing to reopen.

Government sources have cautioned that the exit from lockdown will be slow, with the reopening of shops, gyms, hairdressers and hospitality likely to follow weeks or even months later. Government scientists have warned that pubs and restaurants may be unable to open until May. 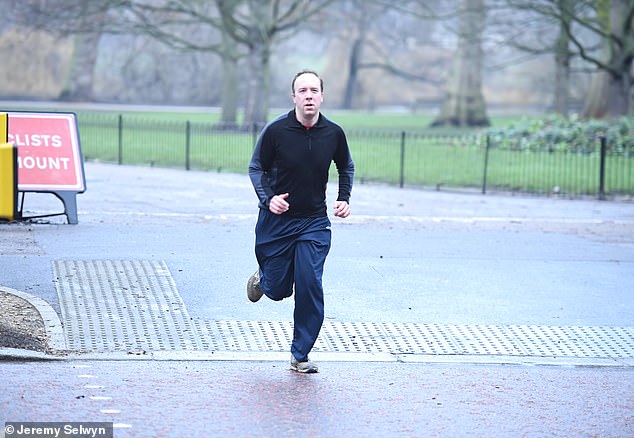 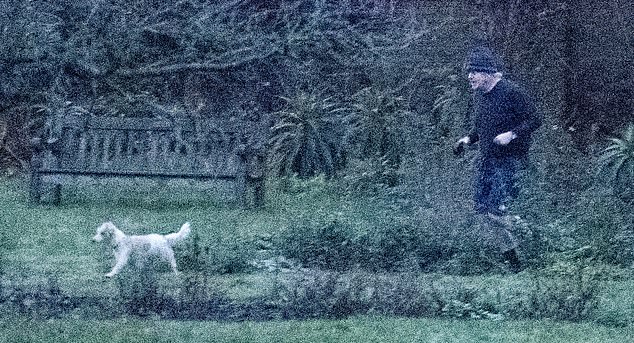 The Prime Minister was accompanied by Number 10 dog, Dilyn

A source told the Daily Mail that a slight easing of the exercise rules could come earlier, adding: ‘Schools will be first, and everything else will have to take its place after that.

‘The only exception to that might be exercise. The PM keeps coming back to social contact – is there anything we could do to help a bit?

‘Could we do a bit more on exercise to help with people’s mental health? That is being looked at.’

Possible options include allowing people to meet a friend from another household for outdoor exercise more than once a day.

Alternatively, socially distanced exercise could be permitted in groups of three or four, although this is thought to be harder to police. 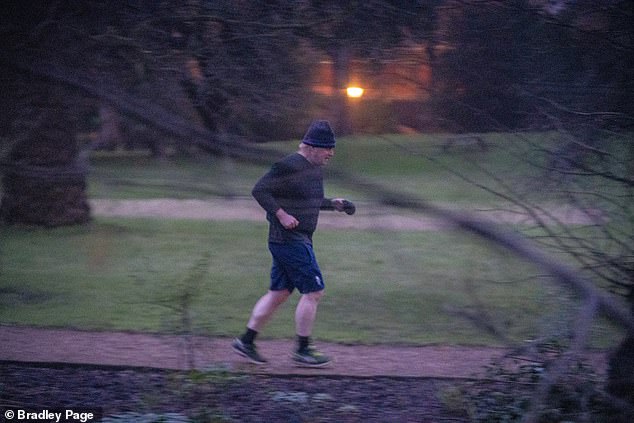 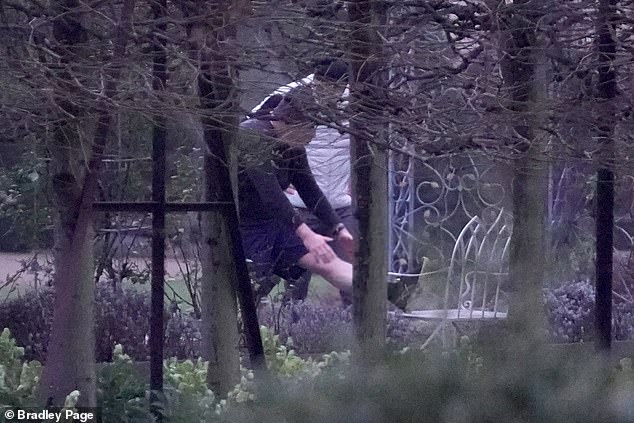 Boris donned a woolly hat and Adidas shorts for the early morning session with his personal trainer, Harry Jameson 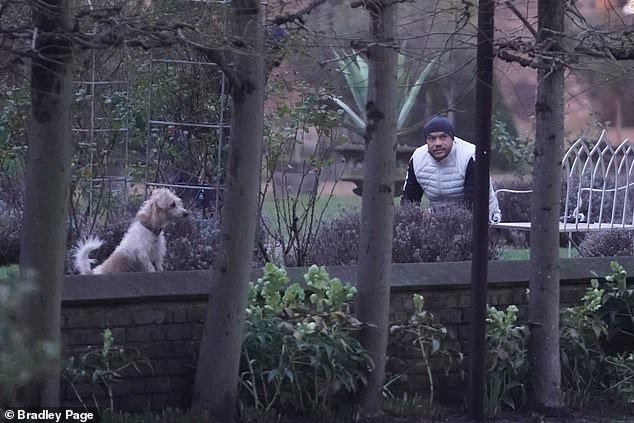 The fitness guru put the PM through his paces, as he continues his health kick following his brush with coronavirus last year

Officials will also examine whether outdoor sports that lend themselves to social distancing, such as golf and tennis, could be allowed to resume, although a source said that was unlikely at this stage.

This comes as government scientists have urged ministers to bring in new guidelines advising people to wear face masks outdoors.

Papers released by Sage, the Scientific Advisory Group on Emergencies, say advice on the use of face coverings should be strengthened so rules are applied more ‘consistently and effectively’ in the fight against the Kent variant of coronavirus.

While shops and offices are strictly enforcing mask wearing already, the document, drawn up on January 13, says people should consider protecting themselves in ‘outdoor spaces where it is difficult to maintain distance’.

Photos from the last few weekends show parks across the UK packed with joggers, tourists and dog walkers struggling to find their own space.