Bad moo-ve: Farmer’s hack to get a giant bag of cattle feed off a trailer brings garage ceiling crashing down

A farmer’s seemingly ingenious hack to lift a giant bag of cattle feed off his trailer backfired when the garage ceiling collapsed.

Chloe O’Toole, 19, had been helping her best friends James and Johnny Bouge, aged 20 and 17, at their yard in Longford, Ireland, when they needed to move the animal feed inside.

As the bag was too heavy to lift on their own, the brothers created a lever by throwing a rope over wooden beams in their garage to lift it up slowly.

However the plan soon backfired when its weight brought the ceiling boards crashing down along with insulation and some of the wooden beams. 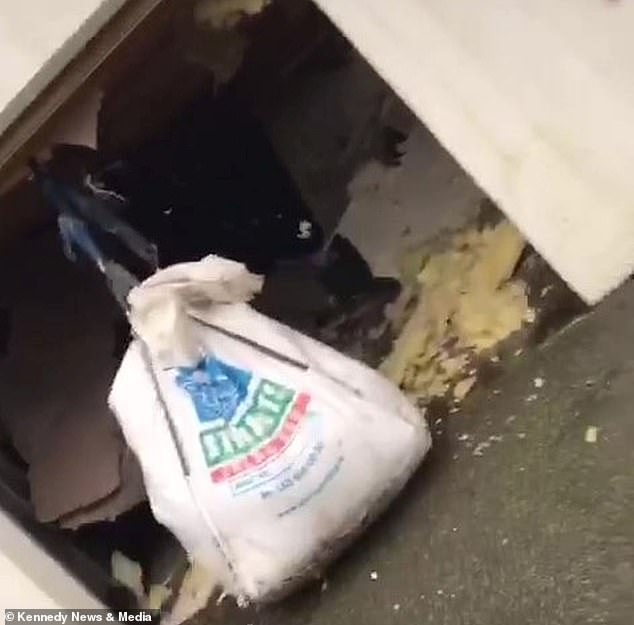 The weight of the cattle feed causes the ceiling to come crashing down along with the insulation in Longford, Ireland 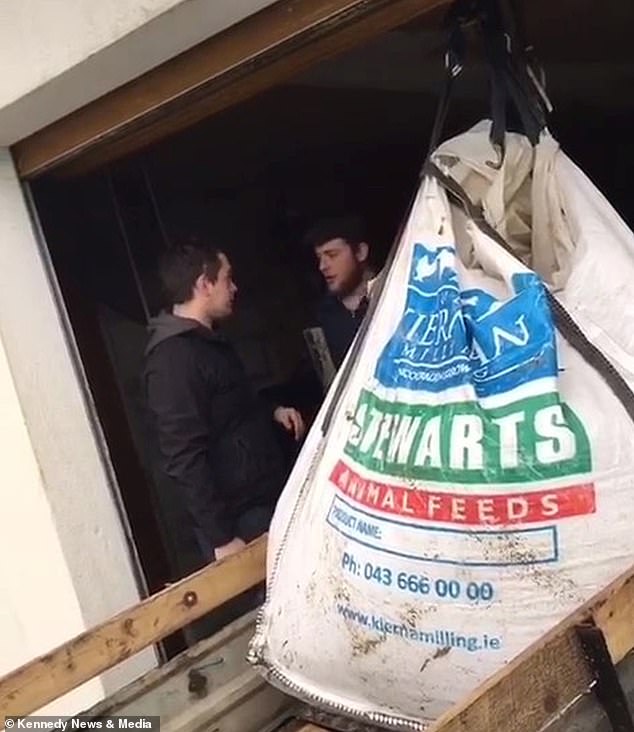 During the clip, filmed on January 13, the bag of feed swings on the wooden beams as James gets in his car and starts to drive away.

Just seconds later, the bag causes the ceiling to buckle, bringing down a roof full of insulation and beams as Ms O’Toole shouts.

Ms O’Toole said: ‘I honestly didn’t know whether to laugh or cry when it happened.

‘We were trying to lift the bag of meal off the trailer and thought the ceiling would just lift it off, instead of us picking it up and then trying to get it inside.

‘At the start I didn’t know what was happening, I was only recording because the boys were shouting at each other and I found it funny. I was about to stop when I heard a snap.

‘All the ceiling slabbing came down along with insulation and some wooden beams snapped. It’s going to cost anywhere from €1,000 (£881) upwards to fix. Thankfully the trailer wasn’t damaged. 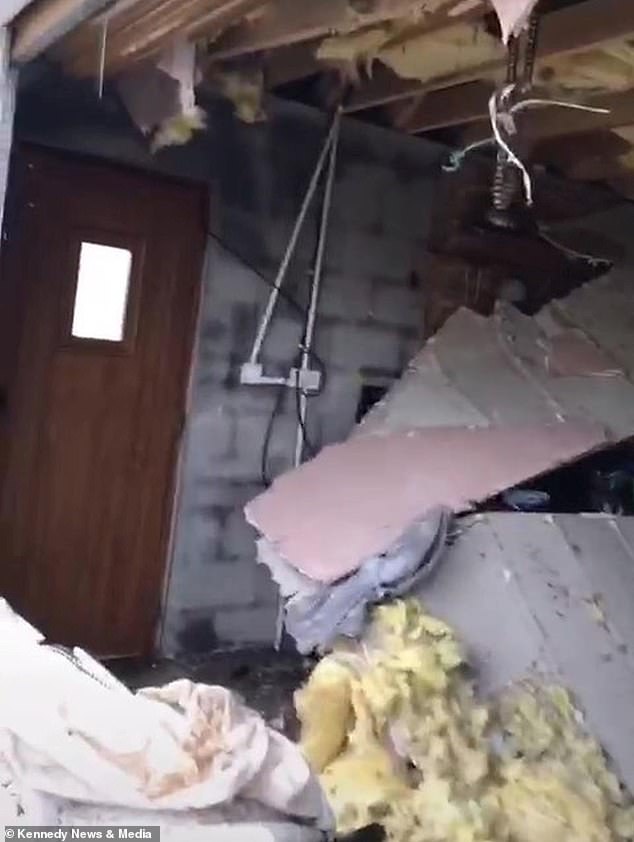 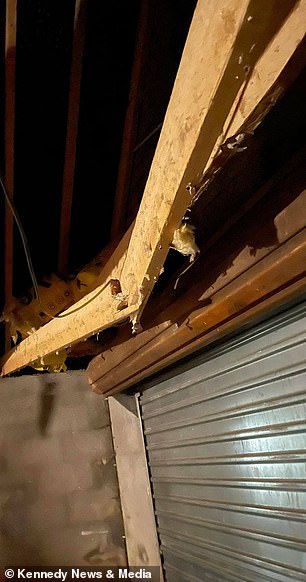 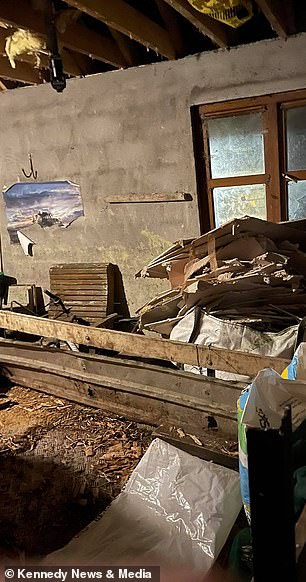 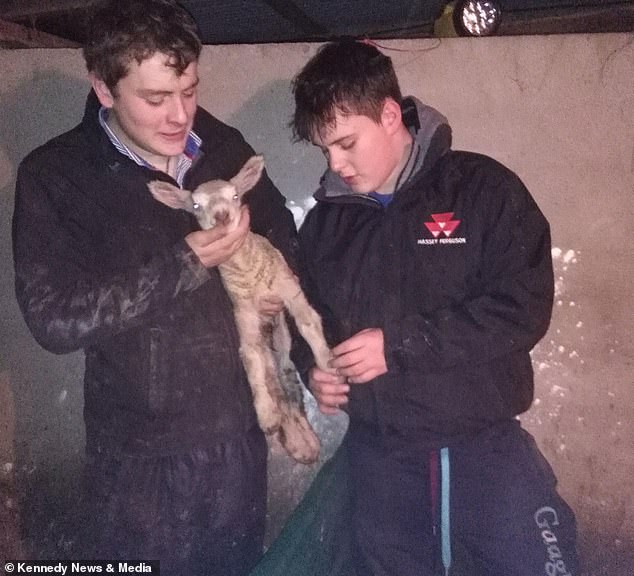 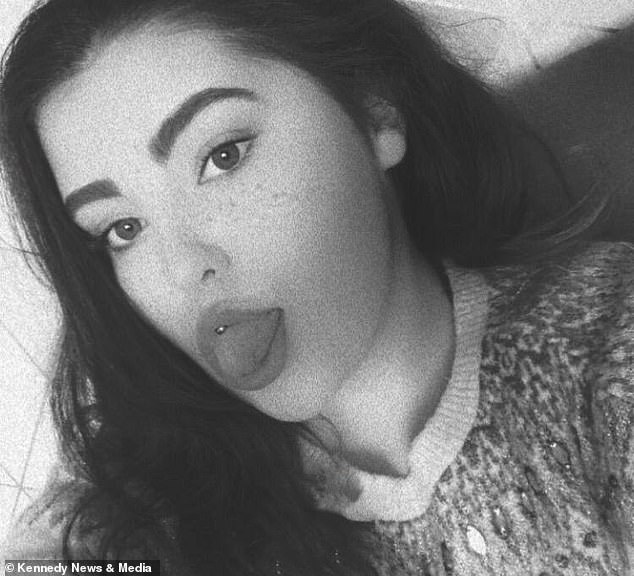 Chloe O’Toole (pictured), 19, had been helping her friends when she witnessed the hack backfire

‘At first I laughed because I was in shock but after we all just stood in silence and then shook our heads. We didn’t even manage to get the bag inside.

‘One of the lads tried to play it down that the roof wasn’t broken but that was just wishful thinking.’

After Ms O’Toole, who works as a care assistant, uploaded the video to TikTok, it has been watched more than 115,000 times with some saying sarcastically joking they ‘didn’t see that coming’.

While another said: ‘Genius!!! Try and explain that to the insurance guy!!’