Shares in Gamestop jumped as much as 18 per cent in premarket trading Monday as the Reddit-fueled volatility continued into February.

Organised in online forums and traded with fee-free brokers such as Robinhood, small-time investors have driven a 1,600 per cent rally in the shares of the video game retailer, scooping up assets big fund managers had bet against.

By Monday morning a volatile pre market saw Gamestop’s shares rise by as much as 18 per cent to $384.89; they were last down about 1.4 per cent.

Robinhood had restricted the purchase of 50 different stocks late on Friday, including blue-chip names Starbucks and General Motors. Vaccine makers Moderna and NovaVax were also on the list.

The move was an apparent act of desperation as the company’s cash reserves were stretched to the limit.

The company’s CEO said that the National Securities Clearng Corporation demanded a $3 billion security at 3am in the morning during dramatic negotiations before the company stopped GameStop trades.

Speaking during a virtual event hosted by Tesla CEO Elon Musk, Vladimir Tenev offered an explanation behind his company’s decision to Thursday to restrict the purchase of GameStop shares and several other stocks. 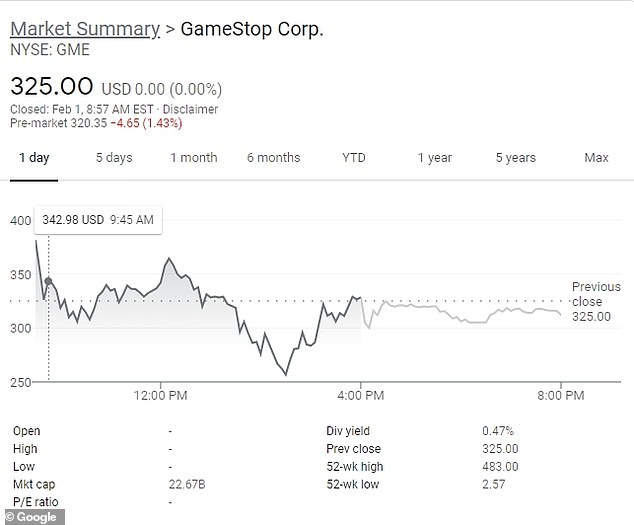 On Friday, Robinhood’s list of restricted stocks had reached 50 different stocks, including General Motors, Beyond Meat and Starbucks

The eight stocks that Robinhood is limiting purchase of

Last week’s wild trading was driven by small investors on the message board Reddit, who took on hedge funds that had bet against shares of struggling video game retailer GameStop.

Reddit CEO Steve Huffman on Monday refused to say if Securities and Exchange Commission has contacted him over wallstreetbets market manipulation as he says ‘people talking about their trades is perfectly legal’ – but that regulators will ‘see if anything crossed the line’.

Robinhood said in a statement that it had restricted users from purchasing certain shares this week because it struggled to meet deposit requirements with the clearinghouses behind the scenes of stock trading.

The trading frenzy came to a head on Wednesday, when GameStop shares shot up 135 percent in a single day, inflicting billions of dollars of potential losses on prominent hedge funds.

On Thursday, Robinhood began banning the purchase of stock in GameStop and several other companies that had been touted on Reddit.

The free trading app is wildly popular with members of the Reddit forum WallStreetBets, where the insurgency began, and the Robinhood’s move drew harsh criticism from users as well as politicians across the ideological spectrum.

Robinhood had already insisted that the restrictions are only temporary. ‘Our goal is to enable purchasing for all securities on our platform,’ the company said.

‘This is a dynamic, volatile market, and we have and may continue to take action to make sure we meet our requirements as a broker so we can continue to serve our customers for the long term,’ Robinhood added.

Robinhood was not the only trading platform to implement trading restrictions. TD Ameritrade also had restrictions on buying shares in 19 companies, most of them with heavily shorted stock. 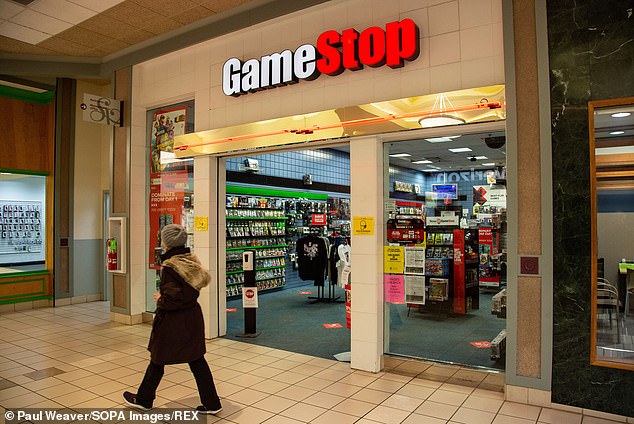 The statement sheds some new light on the surreal events of the week, in which GameStop shares surged as part of a campaign promoted on Reddit

GameStop stock rose another 67% on Friday continuing a staggering rally 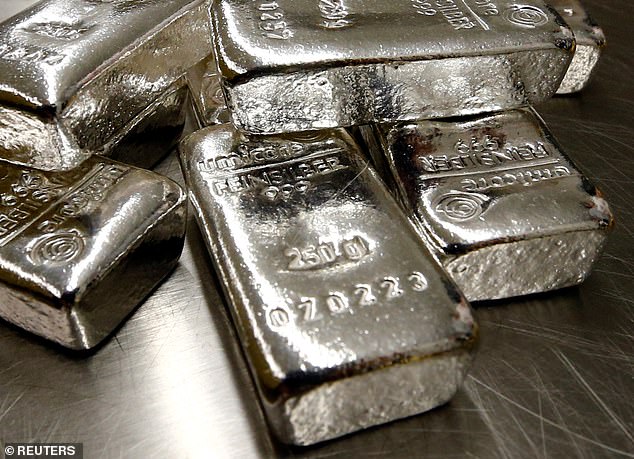 Silver lining? The precious metal price has jumped after being targeted by Reddit traders

The online army of Reddit traders have over the past week rallied to defend out-of-favor companies such as GameStop and AMC, defeating hedge funds that had bet the shares would fall by selling them short, in a stunning reversal of financial power transfixing Wall Street.

Now silver has become the latest example of the influence wielded by followers of WallStreetBets targeting inequality in the global financial system.

Silver prices jumped to eight-year highs this morning after the Reddit brigade of traders that targeted Gamestop turned their attention to the precious metal.

On Twitter, #silversqueeze was trending as investors turned their attention to the latest market strategy to emerge from the “WallStreetBets” forum on Reddit.

How does ‘shorting’ a stock actually work?

Stocks typically benefit investors if the price goes up – they buy stock, the price increases if the company does well, then they sell it for a profit.

But there is a way to reverse that process. Known as ‘shorting’, it involves placing a bet against a company that means a trader makes money when the value goes down.

To do this, a trader borrows stock off a broker, usually for a fee, which they immediately sell – but with a clause saying that they have to buy back that stock by a certain date and return it to the broker.

If the value of the stock goes down, then the trader buys it back for less than the sale price, returning the stock to the broker along with the fee and keeping the rest of the money for themselves.

But, if the stock price rises, they will be forced to buy for more than the sale price, making a loss in the process.

While this sometimes happens by accident, other traders can deliberately boost the price in a process known as a ‘short squeeze’ – which is what Reddit did.

This benefits the ‘squeezers’ because they know that at some point, the short-sellers will be legally obliged to buy back their borrowed stocks, driving the price up further.

It also inflicts heavy losses on the short-sellers, since the amount they lose is tied to the amount the stock rises – they are effectively ‘punished’ for betting against the company, which is what some Redditors appear to be interested in.