Britain and the US both spent seven times more on vaccine development than the EU, figures reveal – with both nations now outpacing the bloc’s beleaguered rollout.

The UK committed £1.67billion on Covid vaccines before it was known whether they would be effective – more than the £1.57billion the EU spent on behalf of 27 countries, with Britain spending £25.00 per capita compared to £3.51 for Brussels.

The US government spent £7.9billion in total, according to the figures from science analytics firm Airfinity, an outlay of £24.02 for each of its 330million people.

Now that the jabs have passed their trials, it is mainland Europe which is struggling to ramp up vaccinations and feuding with AstraZeneca about supplies to the continent.

In addition, Brussels did not strike a deal with Pfizer until clinical trials had been concluded – while Britain and the US had deals in place in July 2020.

The UK now ranks third in the world with 13.2 per cent of the population getting at least one dose of a vaccine, while America is fifth on 7.6 per cent and the EU is languishing on 2.2 per cent. 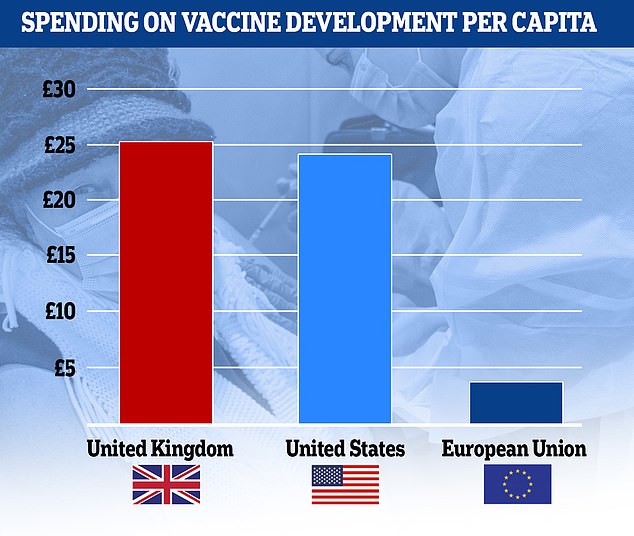 Widely criticised for its handling of the pandemic, the UK government has boasted of its vaccine rollout as a rare success story in recent weeks.

Nearly nine million people in the UK have received a first dose of the vaccine after the UK switched strategies to hand out single doses to as many people as possible.

It comes after Britain spent nearly £1.67billion investing in vaccines and signed a deal in May 2020 to get the AstraZeneca vaccine developed with Oxford scientists.

As the EU row flared up last week, AstraZeneca’s CEO Pascal Soriot pointed to Britain’s earlier deal as a reason why the UK was enjoying uninterrupted supplies.

‘The UK contract was signed three months before the European contract. So with the UK we have had an extra three months to fix all the glitches we experienced,’ he said.

In addition, the UK described its deal for 30million Pfizer/BioNTech jabs last July as the company’s ‘first binding agreement signed with any government’.

When Pfizer’s product became the first coronavirus vaccine approved in the West, it was Britain which handed out the historic first doses in early December. 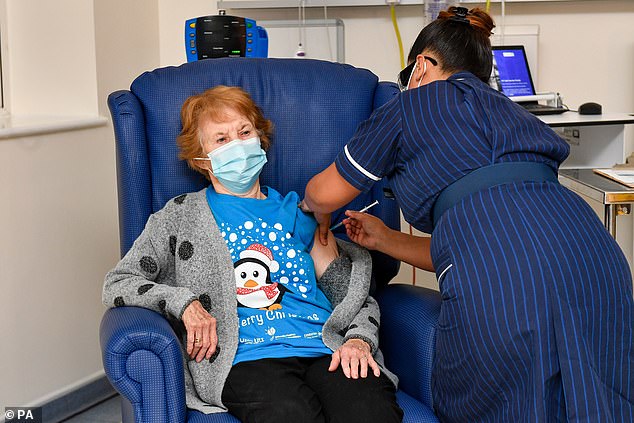 Britain handed out the first doses of a fully-tested coronavirus vaccine anywhere in the world, with Margaret Keenan (pictured) getting the historic first jab

The UK is also in line for 60million doses of another jab from Novavax, which will be made in Teesside and passed clinical trials last week.

However, the UK is behind the US and EU in getting hold of the Moderna vaccine, which is not expected to arrive in Britain until the spring.

Britain has also boasted of continuing to fund vaccine development even after some jabs have become available, with ministers today announcing a deal for 40million yet-to-be-approved Valneva jabs.

‘It will also give the UK future flexibility should we need to revaccinate any of the population,’ a statement said.

The EU and many of its 27 members have faced criticism over their sluggish rollout, with fewer than 10million people getting a dose so far across the entire bloc.

While excessive bureaucracy in countries such as France and Germany has been one reason for the slow start, the EU has also struggled to get hold of enough supplies.

Pfizer and BioNTech have slowed down production to make manufacturing changes, while AstraZeneca said it was cutting supplies to the EU in the first quarter of 2021.

That prompted outrage from Brussels, which imposed export controls last week to supervise vaccines leaving the bloc for other countries.

But AstraZeneca’s CEO told Die Welt that ‘we are three months behind in fixing glitches’ in the European rollout because it signed a deal much later than Britain.

It was not until August 2020 that Brussels signed the agreement with AstraZeneca which became the subject of contention last week.

Meanwhile, the EU’s contract with Pfizer was not signed until November 2020, two days after the company had announced its successful trial results.

The Pfizer rollout did not begin until the very end of December, and even a month later the daily vaccination rates in countries such as France, Germany, Italy and Spain are well below those in Britain and the US. 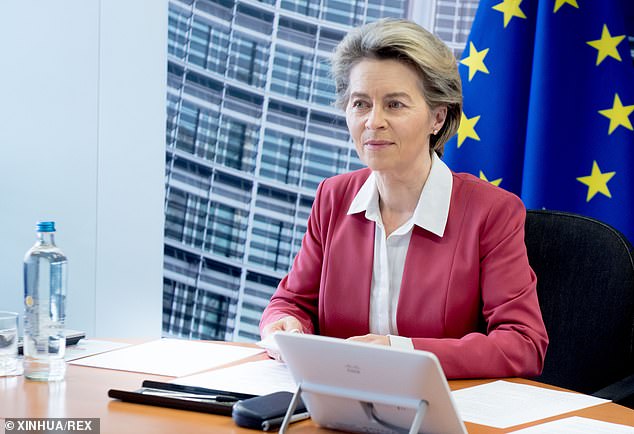 Brussels did sign a deal with Moderna days before Britain, but again this was after the jab had already passed clinical trials.

And the EU was again shown to be lagging when the Novavax trial results were published last week showing 89.3 per cent efficacy.

While Britain has 60million doses ordered, the EU has only conducted ‘exploratory talks’ with the manufacturer, which were completed in December.

Even then, the 200million doses envisaged in an ‘exploratory contract’ are a smaller stockpile when adjusted for population size than Britain has ordered.

The EU also has other agreements in place with vaccines from Sanofi-GSK and CureVac, which have yet to conclude clinical trials.

Like Britain, the US has received little praise for its handling of the pandemic but has had better luck with the vaccine rollout than with preventing infections and deaths.

More than 25million people have received at least one vaccine dose in the US, 2.5 times more than in the EU despite the bloc’s larger population.

Joe Biden’s target of one million vaccinations a day has already been met, with the president now targeting a 50 per cent increase to take the rate to 1.5million a day. 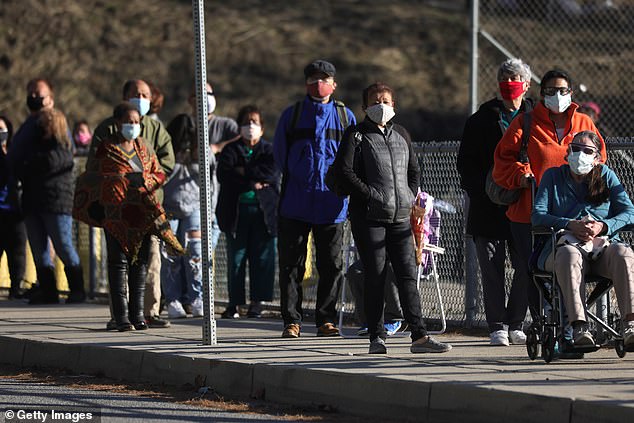 People line up to receive a coronavirus vaccine in California, with the US ranking fifth in the world by number of people who have received at least one dose

Deals signed under the Trump administration included an agreement for up to 600million Pfizer doses last July, around the same time as in Britain.

America is also using the Moderna vaccine after placing an order for 100million doses last August, before either Britain or the EU had signed a deal.

The federal government poured nearly $2billion into Pfizer’s research last July as well as $1.2billion to AstraZeneca and $1.6billion for Novavax manufacturing.

However, while the US has a deal for 300million AstraZeneca doses, the jab has yet to be approved by federal regulators.

Several vaccine trials took place in the United States, including the Johnson & Johnson jab which was shown to be 72 per cent effective there.

The US is in line to get 100million doses of the jab.