Jimmy Hoffa may be buried in a steel drum beneath other metal barrels at a New Jersey landfill site where excavators say there is proof a pit was once dug and filled in after the union leader’s 1976 disappearance.

The whereabouts of Hoffa’s remains has always been a mystery but according to Frank Cappola, the son of the late mobster Paul Cappola Sr, he is buried at a landfill site beneath the Pulaski Skyway.

The site used to belong to Cappola’s father but is now owned by the New Jersey Department of Transportation and is used by a local waste management company to store unused dumpsters.

According to Cappola, Hoffa was murdered in Detroit after showing up to a mafia meeting. His body was then taken back to New Jersey, where Cappola told Fox Nation his father put him in a barrel, head first, then buried him.

Fox Nation journalist host Eric Shawn visited the site with a team of excavators who used radar technology to detect curved metal objects in the ground where Cappola claimed Hoffa was buried. 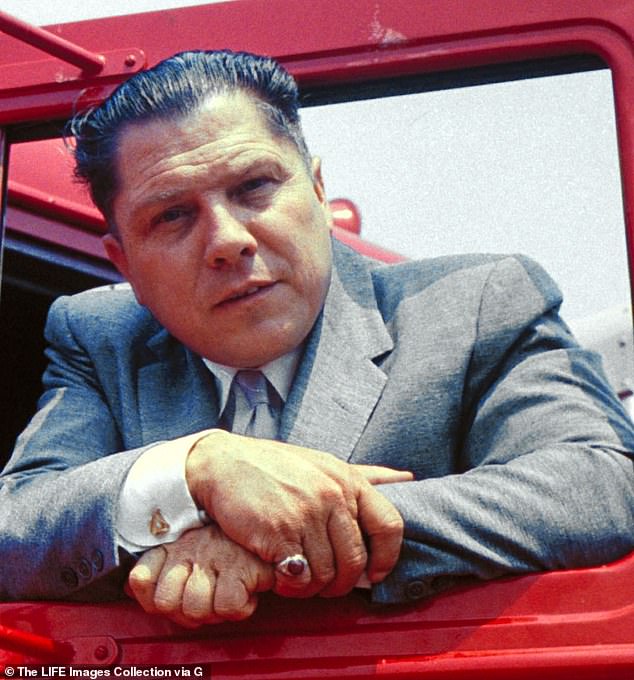 Teamsters boss James R. Hoffa vanished in 1975 after arriving at a meeting with mafia bosses a Detroit restauran 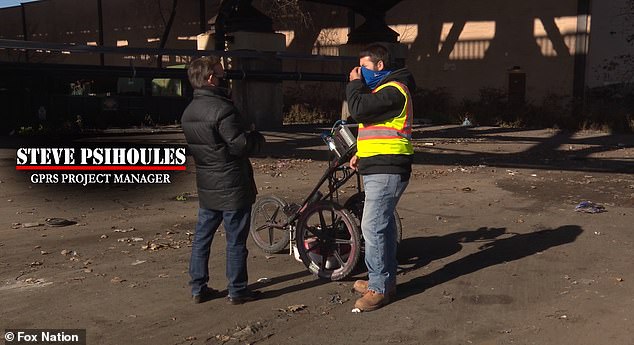 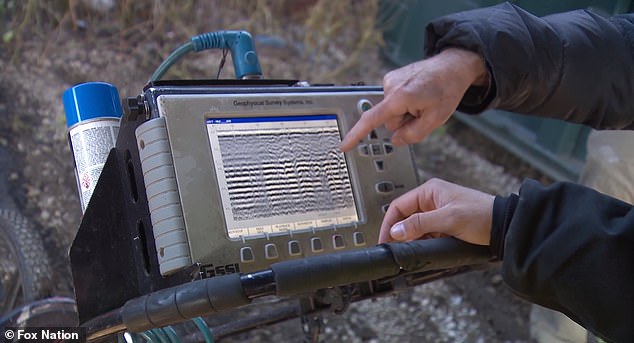 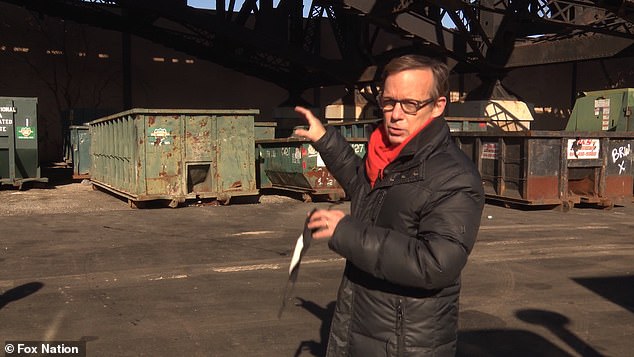 Now, the show’s host and producers say they are waiting for law enforcement to intervene and dig up the site.

Cappola does not name Hoffa’s killer but Phillip Moscato Jr, whose father was mobster Phillip ‘Brother’ Moscato Sr, has previously claimed it was hitman Salvatore ‘Sally Bugs’ Briguglio who shot him, and not Frank ‘The Irishman’ Sheeran, who was recently played by Robert De Niro in The Irishman.

Moscato told Fox Nation that Cappola’s claims about where the body is are right.

The show also brought in a radar excavation team to examine the site where the pair say Hoffa’s remains are.

That team did not dig up anything but they said their radar technology proved the ground had been disrupted and was dug up and filled. 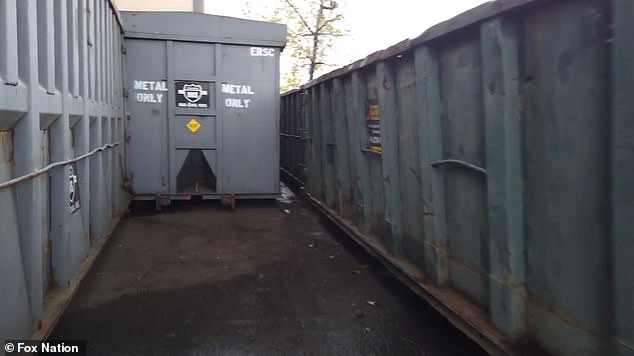 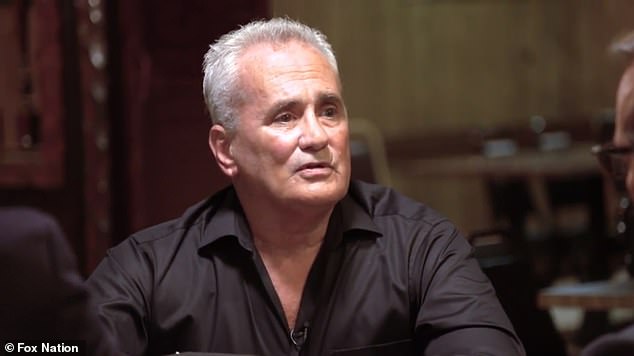 Frank Cappola claimed in November 2019 that Hoffa’s body was buried at the landfill site and that it was his father who put him there. Cappola died in February 2020

Cappola did not give details of how his father came to be involved, but he told the show how he pushed Hoffa’s body in the steel drum.

‘He couldn’t get the legs to bend right.

‘Don’t take this the wrong way, because he had a lot of respect for Hoffa, but he said “they couldn’t fit the fat little man in a barrel feet first.”

‘So they put him in headfirst and then they pushed the cover on top of him. And then they buried him,’ he said.

His father then buried him in a spot where he thought the ground would not be disturbed.

It was right next to a spot that the government did dig up in the 1980s. 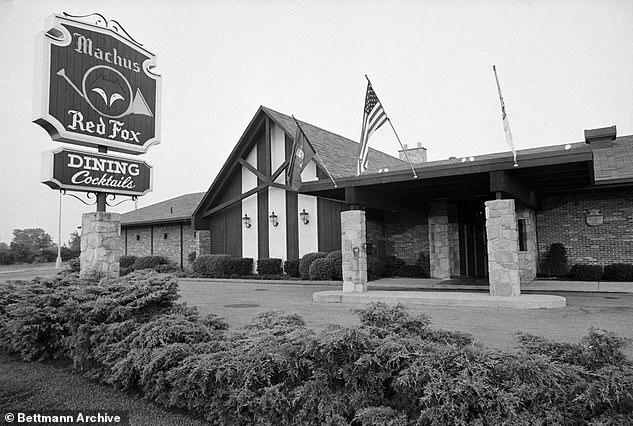 Hoffa was last seen alive on July 30, 1975, eating at a restaurant in suburban Detroit where he’s believed to have met a group of Mafiosos whom he’d known for decades, in an effort to secure their support for his bid to return as the Teamster’s president 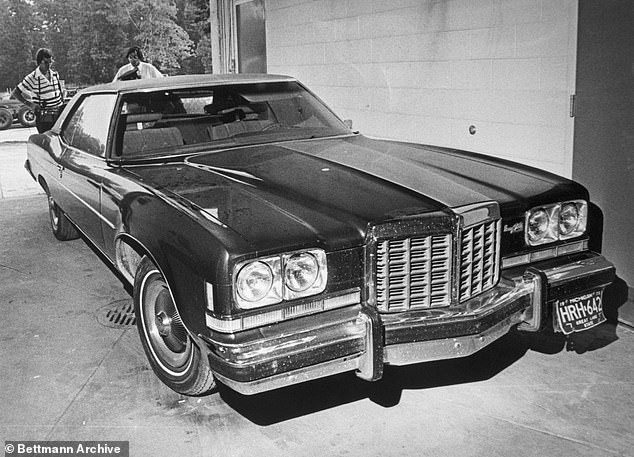 Hoffa left his home in his green Pontiac Grand Ville (above) and drove to the Machus Red Fox restaurant in Bloomfield Township. After he left, he disappeared 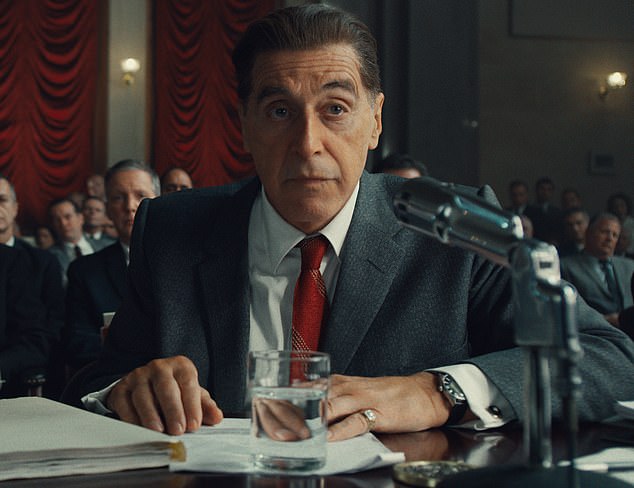 Martin Scorsese’s Netflix smash-hit, The Irishman, is the latest film to offer a fictionalized version of Hoffa’s story (pictured: Al Pacino playing the role of Hoffa)

Known as a federal Superfund site, it was cleared out in the 1980s by the U.S. Department of Environmental Protection which removed barrels filled with toxic waste.

‘My father decided to change location because he felt he couldn’t, he didn’t know if somebody was watching.

‘The place was always under surveillance. After I came in the next day, the hole was filled,’ Cappola told Fox Nation.

Cappola said he had finally decided to come forward because most of the people involved were dead.

He told Fox Nation that his father, who died in 2008, had always been haunted by his role in the killing.

‘[He] was very upset all his life over it, that he had to get put into that position. But you know, if you don’t do it, then they do it to you.

‘I think I am doing the right thing. My father said “I want this man to go home to his family. He needs to go back home.”

‘He was a great, good man and my father respected him,’ he said.

Hoffa intended to testify before the special U.S. Senate investigative panel, known as the Church Committee, about Mafia involvement in U.S.-backed plots to assassinate Cuban President Fidel Castro before his death.

WHAT HAPPENED TO JIMMY HOFFA?

The FBI has long suspected that Hoffa fell victim to a mob hit, with his death having been orchestrated by the ‘highest echelons of organised crime’.

Though Hoffa was officially declared dead in 1982 – seven years after his disappearance – no remains have ever been found, leading to speculation about his final resting place, as well as a swell of conspiracy theories as to who carried out – and who ordered – the apparent whacking.

Hoffa became the president of the International Brotherhood of Teamsters, one of the world’s largest labor unions, in 1957. 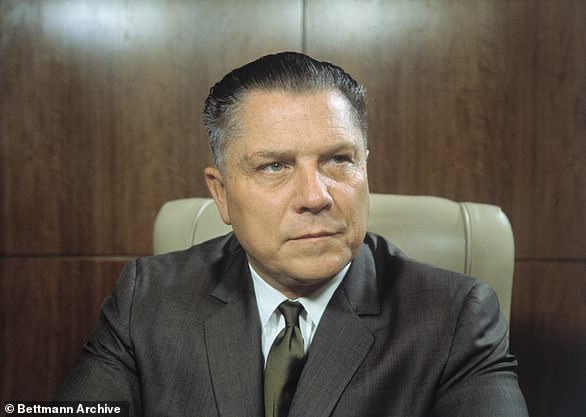 The FBI long suspected that Hoffa fell victim to a mob hit. His body was never found

Shortly after his appointment, his ties to organized crime began to surface, drawing the ire of the federal government, most namely Bobby Kennedy, who served as the Attorney General under his brother President John F. Kennedy in the early 1960s.

Relations between the two became so fraught that Kennedy created a 20-prosecutor team in the Justice Department dedicated to ‘get Hoffa’ on corruption charges.

He was ultimately convicted of illegally funneling several large pension fund loans to leading organized crime figures in 1964. He later received an additional conviction for attempting to bribe a grand juror.

He only served four years of his 13-year sentence before then-President Richard Nixon commuted his prison term to time served. Though he was granted his freedom, Hoffa was banned from engaging in any union activities until 1980.

After his released from prison, Hoffa’s once tight-knit relationship with the mafia began to spectacularly fall apart. 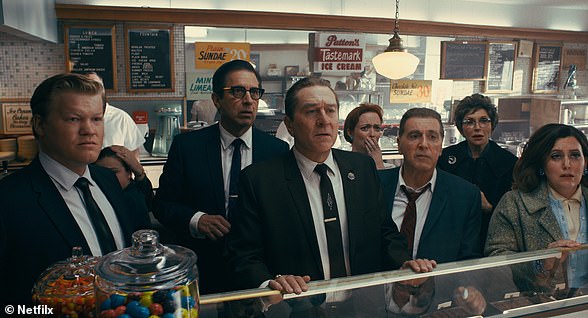 A clip from The Irishman film in a break in the trial of Jimmy Hoffa, from left, Chuckie O’Brien (Jesse Plemons), Bill Bufalino (Ray Romano), Frank Sheeran (Robert De Niro) and Hoffa (Al Pacino) appear shocked at the news of JFK’s assassination

On that fateful July day, Hoffa left his home in his green Pontiac Grand Ville in the early afternoon and drove to the Machus Red Fox restaurant in Bloomfield Township.

There, he had allegedly scheduled a lunch with Anthony Provenzano, a caporegime of the Genovese crime family and the acting president of the Teamsters Union, and Tony ‘Jocks’ Giacalone, a kingpin in Detroit’s organized crime scene.

The meeting had been scheduled to take place at 2pm, but fifteen minutes later, an incensed Hoffa called his wife from a payphone to tell her he’d been ‘stood up’, asking her ‘Where the hell is Tony Giacalone?’

Then at 3:27pm, with no apparent sign of Giacalone or Provenzano, Hoffa called his former rival-turned-close friend Louis Linteau, who also once headed up Teamsters, telling him: ‘That dirty son of a b***h Tony Jocks set this meeting up, and he’s an hour and a half late.’

Linteau told Hoffa to calm down and asked him to stop by his office on the way home. Hoffa agreed and then hung up – ending what would prove to be his final ever communication.

When Hoffa’s family reported that he’d failed to return home the next morning, Linteau retraced his friend’s steps to the Machus Red Fox, finding his unlocked Pontiac in the parking lot, with no sign of Hoffa or what direction he may have headed in.