During an interview with Yahoo Finance, Tenev was asked to set the record straight on why the mobile brokerage firm made the decision to restrict trades involving GameStop shares as prices surged last week.

‘Oh, on that conspiracy theory, I think I’ve over and over again said that it’s not true,’ Tenev said.

‘Our decision to temporarily restrict customers from buying certain securities had nothing to do with a market maker or a market participant or anyone like that putting pressure on us or asking us to do that.

‘It was entirely about market dynamics and clearinghouse deposit requirements, as per regulation,’ he added. 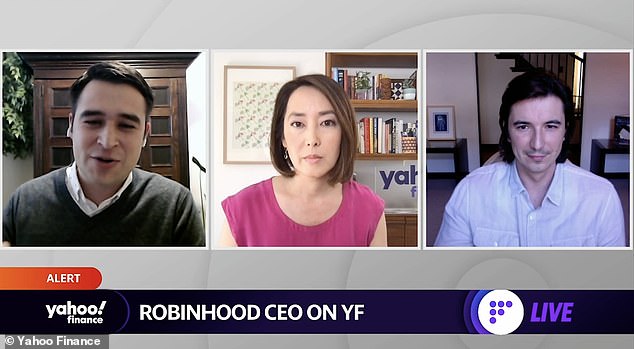 Calling the claims conspiracy theories, Tenev (pictured) said: ‘Our decision to temporarily restrict customers from buying certain securities had nothing to do with a market maker or a market participant or anyone like that putting pressure on us or asking us to do that’

On Thursday, Robinhood began restricting the purchase of GameStop shares and several other stocks, provoking outrage as little investors were locked out while big hedge funds and wealthy traders were free to buy and sell.

Robinhood’s restrictions on GameStop shares spurred furious accusations that the company was trying to tank the stock for nefarious purposes, but Tenev has continued to deny those allegations.

Big time hedge funds have suffered an estimated $19billion in losses on their bets against GameStop.

GameStop shares ended the day on Friday up nearly 70 per cent, as Robinhood eased restrictions on buying the unlikely market darling, even as the broader market tanked, with the Dow dropping 620 points amid concerns about the ripple effects of the bubble.

Stock in theater chain AMC, which, like GameStop, had been heavily shorted, closed up 54 per cent.

The target of a campaign on the online message board Reddit to ‘squeeze’ hedge funds betting against the stock, GameStop shares have rallied roughly 1,800 per cent since the beginning of the month as the ‘meme stock’ insurgency picked up steam.

So far, the gains and losses for each side in the battle are mostly on paper, with each side hoping to outlast the other before cashing out.

But as of Friday, investors who bet against GameStop are sitting on about $19billion in losses, with the damage topping $10billion alone on Wednesday, when GameStop shares surged 135 per cent, according to data from Ortex provided to Business Insider.

Though their specific losses are undisclosed, hedge funds Melvin Capital, Citron, and Maplelane LLC are known to be among those that took out massive positions betting that GameStop’s share price would fall.

Claims also circulated on social media that Robinhood was forcibly selling off shares of GameStop without the account holder’s permission, and the moves drew furious outcry. 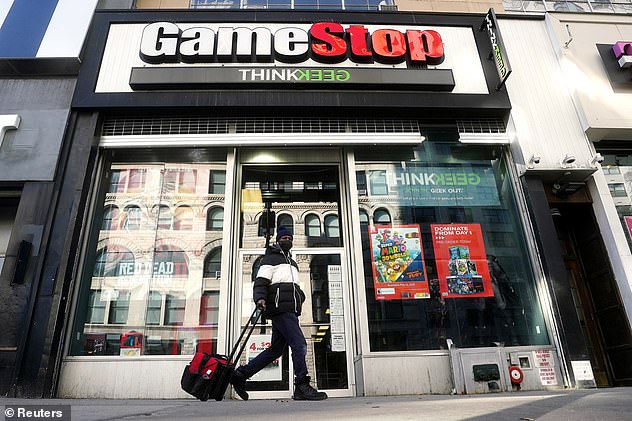 GameStop shares ended the day on Friday up nearly 70 per cent, as Robinhood eased restrictions on buying the unlikely market darling, even as the broader market tanked, with the Dow dropping 620 points amid concerns about the ripple effects of the bubble 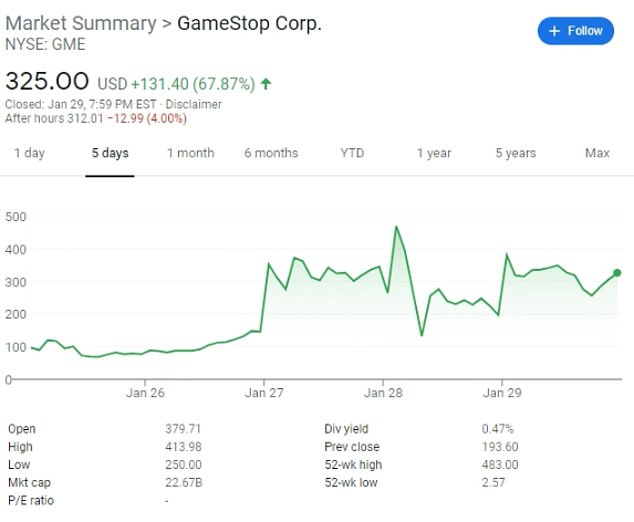 GameStop stock rose another 67% on Friday continuing a staggering rally

But Robinhood claimed that the forced sell-offs of shares were only related to stock bought with borrowed money, or to the execution of stock options, which are contracts to buy or sell shares.

‘Claims that Robinhood proactively sold customers’ shares outside of our standard margin-related sellouts or options assignment procedures are false,’ a Robinhood spokesperson told DailyMail.com on Saturday.

Buying shares ‘on margin’ means using funds lent from the broker, and it is not unusual for brokers to automatically liquidate such shares if an account falls below minimum balance requirements. On Robinhood, users need an account balance of at least $2,000 to trade on margin.

Margin shares could have placed further strain on Robinhood’s balance sheet, potentially leaving the broker on the hook in the event of a massive collapse in GameStop’s share price.

During the interview with Yahoo, Tenev was also asked what conversations has he had with lawmakers.

‘Look, I think we – everyone at Robinhood operates this company with integrity and, first and foremost, looking out for our customers, the individual investors, and their best interests,’ he began.

‘Of course, we are constantly in communication with our regulators and with lawmakers. And we continue to do so. And you know, I look forward to having conversations with anyone about this.

‘Because I think, obviously, it’s highly technical and involves settlement mechanics, as you guys saw in some of your other conversations. And I think Robinhood made the right decision here,’ he added.

The Securities and Exchange Commission suggested in a statement on Friday that it is looking into the matter.

The SEC said it will ‘closely review actions taken by regulated entities that may disadvantage investors or otherwise unduly inhibit their ability to trade certain securities’.

The 50 stocks that Robinhood limited purchase of

On Friday, Robinhood lifted its total ban on buying GameStop stock, but limited users to accumulating only one share, unless they already owned more.

Those buying limits expanded to 50 different stocks late on Friday, including blue-chip names Starbucks and General Motors, in an apparent act of desperation as the company’s cash reserves were stretched to the limit.

Vaccine makers Moderna and NovaVax were also on the list. A Robinhood spokeswoman declined to confirm to DailyMail.com that the same stocks would be restricted on Monday, saying only that the company would ‘continue to monitor the situation and make adjustments as needed’.

The restrictions extended far beyond the ‘meme stocks’ such as GameStop that drew frenzied interest this week, and indicate the precarious financial position that Robinhood could be in.

Robinhood insists that the restrictions are only temporary. ‘Our goal is to enable purchasing for all securities on our platform,’ the company said.

‘This is a dynamic, volatile market, and we have and may continue to take action to make sure we meet our requirements as a broker so we can continue to serve our customers for the long term,’ Robinhood added.

Robinhood was not the only trading platform to implement trading restrictions. TD Ameritrade also had restrictions on buying shares in 19 companies, most of them with heavily shorted stock.