Sir Keir Starmer’s hopes of replacing Boris Johnson took another hit today as a new poll suggested only a fraction of the public believe he would make a better prime minister.

Just 16 per cent of those polled exclusively for MailOnline by Redfield and Wilton Strategies believed the Labour Leader would have done a better job in leading Britain through the pandemic.

While Sir Keir polled higher than any of Mr Johnson’s Tory counterparts he was behind Nicola Sturgeon (19 per cent), with more than one in five (22 per cent) saying none of the suggested senior politicians would have been up to the task.

It came as a separate poll suggested that Mr Johnson’s Tories were experiencing a small ‘vaccine bounce’ of popularity.

A survey for ITV’s Peston programme put the Conservatives on 43 per cent, up four on the same time two months ago – before the lockdown started and the UK hit and passed its horrific 100,000 death toll.

But in that time there has also been positive news about the vaccine programme, raising hopes that the UK may emerge from lockdown within weeks.

The figures came as a leading Labour ‘Bible’ questioned whether Sir Keir was ‘up to it’ as leader of the Labour Party. 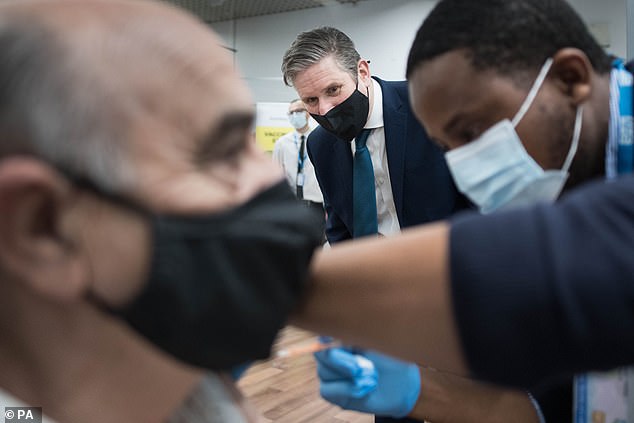 While Sir Keir polled higher than any of Mr Johnson’s Tory counterparts he was behind Nicola Sturgeon (19 per cent), with more than one in five (22 per cent) saying none of the suggested senior politicians would have been up to the task 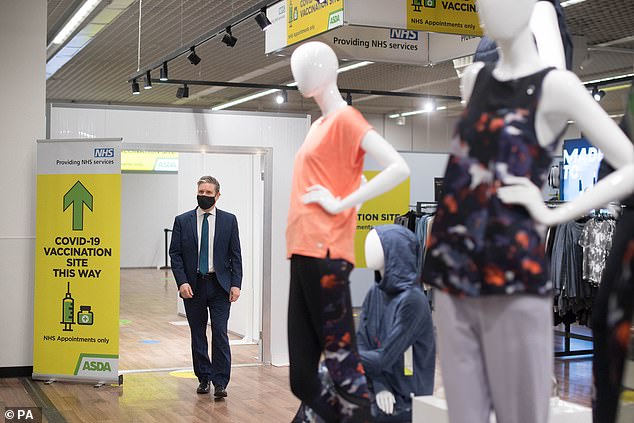 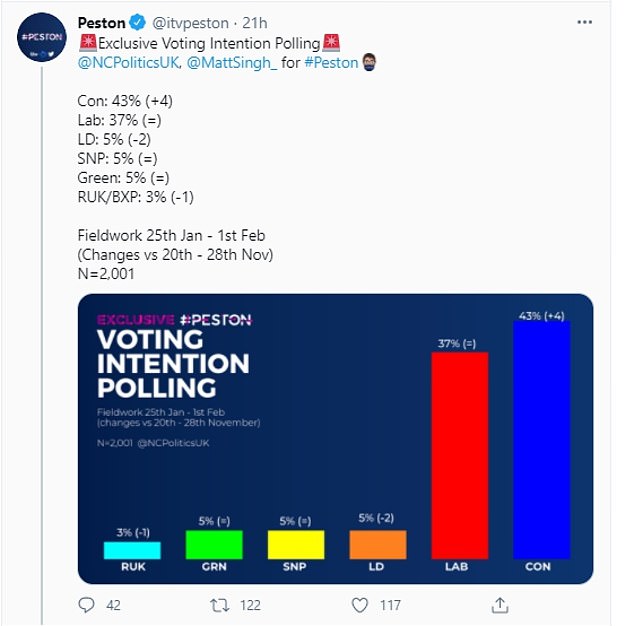 In a withering assessment of the leader’s nine months in charge, the New Statesman’s political editor Stephen Bush wrote: ‘MPs complain that he has ”no politics” and that Starmer’s Labour has no clear identity beyond bland reassurance.

‘Backbenchers who feel they would do a better job than the shadow Cabinet complain that its members are mostly anonymous.

‘In turn, shadow Cabinet members complain that it is hard to make an impression when their quotes are stripped of anything exciting or provocative by the party’s press office.’

‘One problem is that what might be canny politics outside Westminster looks a lot like grim opportunism inside it.

‘Labour’s proposal that teachers should be vaccinated before or alongside at-risk groups has been rejected not only by the Government, but by its scientific advisers and the Labour government in Wales, on the grounds it would risk more lives and would not significantly reduce the likelihood of transmission in schools.

‘For all that the idea is popular with voters, most coverage it attracts is hostile, and the campaign risks tarring the party as opportunistic and unserious.’

Sir Keir today also sought to play down an incident after Prime Minister’s Questions in which he reportedly had a ‘heated’ confrontation with Boris Johnson.

The Labour Party leader said ‘nothing’ happened after the pair left the House of Commons following a terse exchange across the despatch boxes on Wednesday.

After the session, Sir Keir had to apologise for denying having previously supported the UK remaining a member of the European Medicines Agency (EMA) after Brexit.

Mr Johnson and Sir Keir were seen walking out of the Commons together following their PMQs clash and continued their conversation while standing just outside the chamber.

According to eyewitnesses quoted by the Sun, the political rivals were seen having a ‘heated discussion’ about the Prime Minister’s EMA remarks, allegedly resulting in Sir Keir being ‘led away’ by ally and Labour whip Chris Matheson.

Asked by broadcasters what was said during Wednesday’s conversation, Sir Keir said: ‘Oh, nothing, we had a discussion on the way out.’

Pressed on whether it became heated, he replied: ‘No, no, no, no – we were discussing it as we went out, that’s not unusual.’

Chester MP Mr Matheson had previously called the eyewitnesses’ claims ‘absolute bollocks’, adding: ‘There was a brief chat and then Keir and I left together. Nothing more to it than that.’

Sir Keir repeated his apology for questioning the truth of Mr Johnson’s statement that the Opposition leader had previously said it would be better for the UK to remain a member of the European Union’s medicines regulator.

The former director of public prosecutions had said Mr Johnson was talking ‘complete nonsense’ after the Conservative Party leader accused him of repeatedly calling for the UK to stay in the EMA, suggesting such a move would have hampered the country’s Covid-19 vaccine rollout.

Sir Keir apologised for the error after it was pointed out that Hansard, the official record of Parliament, had recorded him in January 2017 questioning why the UK would want to leave the EMA and that it should be something retained as part of the Brexit process.

‘I had misheard what the Prime Minister was putting to me, I was wrong about that and, as I say, hands up, I got it wrong. Better to say that and just be straight about it,’ he told broadcasters during his visit to a vaccination centre at an Asda supermarket in Watford.