Andre Petroski is a middleweight MMA fighter who fought in the LFA (Legacy Fighting Championship) before his recent debut on The Ultimate Fighter Season 29. Bearing a 5-1-0 pro-MMA record on his resume, Petroski will be seen fighting for Team Ortega in the ongoing season of TUF.

The first episode of the recently filmed TUF 29 premiered on June 1 on ESPN+. Andre Petroski fought Alaska native Aaron Phillips in the first bout of the season. The middleweight clash ended in round one when Petroski submitted Phillips with a guillotine choke.

“He learned that choke yesterday!”@BrianTcity talks about middleweight Andre Petroski’s victory on the first episode of #ReturnOfTUF 🔊⬆️

Petroski’s collegiate wrestling acumen was on full display from the get-go. The 29-year-old took Aaron Phillips down with two minutes remaining in the first round. Petroski mounted Phillips and secured a guillotine choke to end the bout.

Andre Petroski’s victory via submission shouldn’t come as a surprise, considering that the New Jersey native is a Gracie Jiu-Jitsu disciple. During the TUF press conference, Petroski appeared confident about his grappling skills:

“I wrestled all through high school and in college. When college was over, I knew…I wanted to fight. So that’s basically how it started. My family steered me away [from fighting]. But we were always fans. I was always watching and my dad was competing. My parents knew this was going to be my passion. I was born to do this,” said Andre Petroski.

Andre Petroski is a long-time fan of The Ultimate fighter

Making weight for bouts frequently isn’t new for Andre Petroski. Having been a former collegiate wrestler, Petroski finds “The Ultimate Fighter’s” format custom-made for him. Furthermore, Petroski has long been a fan of the franchise. The ‘Renzo Gracie Philly’ team member believes the invitation to partake in the 29th season came at the right time in his fighting career.

“Specifically with the Ultimate Fighter, I always watched it and [thought] that format and that scenario would be perfect for me. I come from a wrestling background and we’re used to making weight. Regularly competing often. The format is where I excel. When I’m active, that’s when I compete the best. They hadn’t done a show since 2018. When i saw they were coming back…at my weight class, everything came together at the perfect time,” added Andre Petroski. 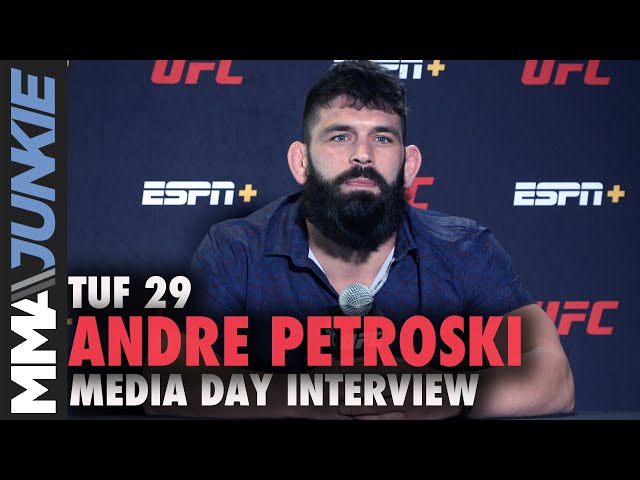