The Fortnite Season 7 Battle Pass trailer was recently revealed, giving gamers a glimpse of all the probable skins that will be available to acquire by ranking up the tiers.

Epic has introduced several new features into the game with the v17.00 update that was recently rolled out. Apart from changing the theme of the island from Primal to Alien, the developers have made significant changes in the Fortnite Season 7 Battle Pass as well.

This article will reveal the details of the changes in the Battle Pass and discuss the skins that loopers can unlock by ranking up.

The Fortnite Season 7 Battle Pass has several pages in it. In-game items and cosmetics are divided across these pages. Loopers can unlock these pages by claiming a certain number of rewards or by reaching a specific level in the Battle Pass.

Leveling up the Battle Pass will also unlock several Battle Stars for gamers. Loopers can purchase specific skins using Battle Stars once the page has been unlocked.

The Fortnite Season 7 Battle Pass trailer revealed the character of Rick from the popular animated series, Rick and Morty. The introduction of Rick in the trailer indicates that gamers will have the opportunity to get a hold of the cosmetic through the Battle Pass.

Unlocking the Rick Sanchez cosmetic will take some time, as it is located on page 10 of the Battle Pass. 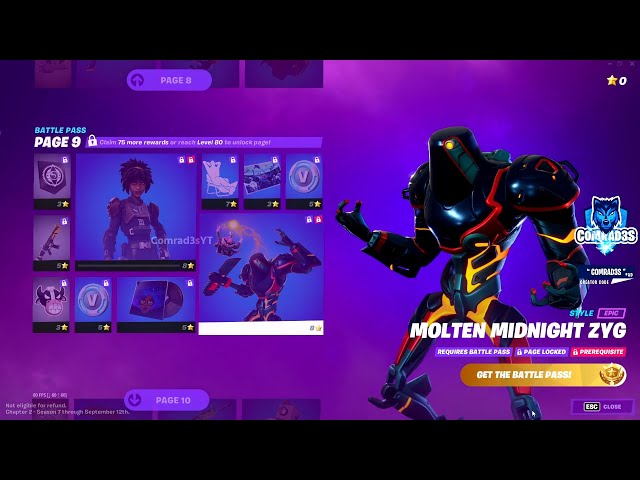 In order to open the page, loopers need to reach level 90 or open 90 or more rewards from the Fortnite Season 7 Battle Pass. Once page 10 has been unlocked, gamers will be able to get the Rick Sanchez cosmetic by exchanging 9 Battle Stars.

Gamers can secure the Toxic Rick cosmetic through 20 Battle Stars and by collecting 105 rewards from the Battle Pass. Gamers will also be required to possess the base Rick Sanchez skin to unlock the Toxic Rick version.

Alien forces have invaded the Island while Doctor Slone leads the Imagined Order against them.

Team up with Guggimon, Rick Sanchez, Kymera and more as the cosmic war rages.

The Battle Pass rewards do not hold the Superman skin. It is anticipated that the coveted skin will be available after completing certain quests in the game, similar to the Neymar Jr. outfit that was released in Fortnite Season 6.

It is speculated that the Superman skin will be the secret skin for Fortnite Season 7. Gamers are eager to get the Superman skin as soon as possible. However, it must be noted that Season 7 went live only today. Therefore, it will likely take some time before Epic releases it in the game.