One of this week’s Fortnite challenges is to collect different IO weapons. IO, of course, stands for Imagined Order, the group who returned this season in the wake of the alien invasion. Now, players are being challenged to collect three different IO tech weapons.

Fight in a cosmic war in Fortnite Chapter 2 Season 7: Invasion. Alien forces have infiltrated the Island while Doctor Slone leads the IO forces against them. Jump into battle by taking up both side’s tech: abduct your foes in a flying Saucer, blast enemies with the Rail Gun-

The IO tech weapons added to Fortnite for this season are the Pulse Rifle, the Recon Scanner and the Rail Gun. Picking up each of these weapons will complete the challenge and earn battle stars. Battle stars can be used on the battle pass to purchase any item at any time, rather than the traditional leveling up and earning rewards process.

Fortnite: Where are the IO weapons located 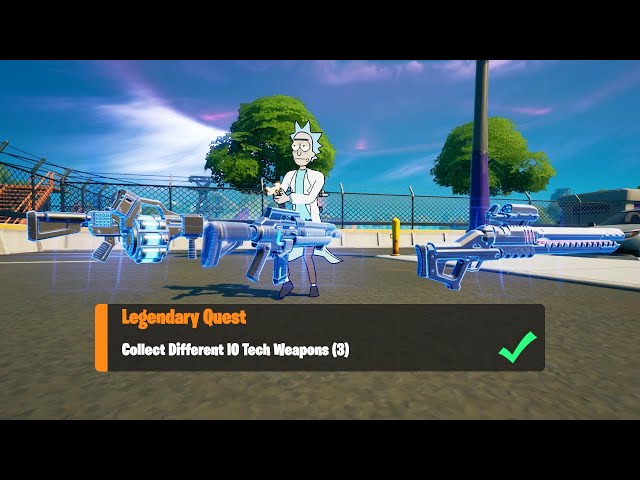 The best way to find IO tech weapons is to land at the different IO outposts scattered throughout the Fortnite map. These locations have distinct red lights that can be seen from the sky, so landing there isn’t too difficult. Once there, players can find chests that are not the same as standard chests.

The IO chest is wider, a different shape and dark. These chests aren’t guaranteed to drop an IO tech weapon, but the chances are much greater than that of the standard chests. Normal chests can drop IO weapons, so don’t avoid them.

IO chests are the quickest way to find IO tech weapons in Fortnite given how many there are at a given IO outpost on the map. Still, they’re not guaranteed, and regular chests have even lower IO tech weapon rates. Players can passively complete this challenge by just playing games, but there is an advantage to pointedly completing challenges.

Completing challenges quickly will give players battle stars that can be used to buy any battle pass skin they want, so it stands to reason that players will want to complete challenges as fast as they can. That’s where the other option to find IO tech weapons comes into play.

The third, and only guaranteed, method of finding IO tech weapons is to eliminate IO Guards. These can also be found at the IO outposts and are NPCs that will try to eliminate players as well. Eliminating them will result in a loot drop that always has an IO tech weapon since the IO Guards only use them.

There are plenty of ways to get these weapons, but landing at IO outposts and eliminating IO Guards remains the best and quickest way to try and complete this week’s Fortnite challenges.