Genshin Impact has now released version 1.6, and one of the first new additions is the Echoing Tales event.

In this event, Travelers collect Echoing Conches, which hold voices from the past. Finding one unlocks a voiceline, and each voiceline belongs to a themed set. By collecting conches, Travelers earn Primogems, useful materials, and Barbara’s Summertime Sparkle outfit.

Genshin Impact will introduce a total of 32 conches before the event ends in 41 days. Currently, Travelers can find only five Echoing Conches on the Golden Apple Archipelago. The Echoing Conches are on three of the current isles in the archipelago: Twinning Isle, Pudding Isle, and Broken Isle. Exact locations are marked on the map below:

The first Echoing Conch location is just east of the Teleport Waypoint on Pudding Isle. Next to a handmade shelter and some crates, this conch is resting on a flat rock. This Echoing Conch should be in plain view, unguarded by enemies.

On the western side of Pudding Isle, there’s a small island that’s lower in elevation than the main island here. The second Echoing Conch is easily visible on another flat rock.

On Twinning Isle, there is an Echoing Conch located east of the Teleport Waypoint. Players should jump down off the cliff to find it under a tree.

The next Echoing conch on Twinning Isle is on the southern island, among a Hilichurl camp. Players can start at the Teleport Waypoint and glide down. After taking care of the enemies, the Echoing Conch is safe to collect.

On Broken Isle, there is a torch puzzle on the northernmost island that rewards a chest for completing it. The last echoing conch is next to one of the torches below the chest.

To navigate here, players can use a Waverider boat. Players can then walk to the northern side of the small island.

For a visual walkthrough of part one of the Echoing Tales event, players can refer the video below: 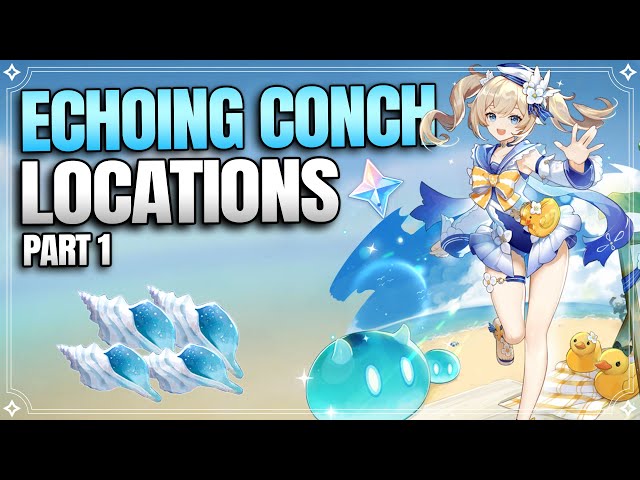 Echoing Tales is a rather long event, lasting the full duration of version 1.6. This event ends in 41 days, though it’s uncertain whether this cutoff limits the event shop or the ability to collect the conches.

New conches are sure to appear soon, and perhaps players will begin to understand the purpose of these ancient voices. For now however, players can only collect these five Echoing Conches.