The Denver Broncos are taking their lives one day at a time at the moment. They are currently at the forefront of the minds of Aaron Rodgers and Deshaun Watson as potential landing spots, according to recent speculation. Depending on how the next few weeks shape up, the Denver Broncos could easily see five wins come or go depending on who they land.

Meanwhile, they also have to keep an eye on their current players and build a plan for the season based on what they can do. Here are five players they’ll be watching closely going into training camp.

Who the Denver Broncos cannot wait to get another look at

Drew Lock’s performance in training camp is likely to determine his future at the franchise. However, he will first need to beat Teddy Bridgewater to the punch. Could Drew Lock surprise the Denver Broncos?

Teddy Bridgewater was added to the roster this offseason before news broke about Aaron Rodgers and Deshaun Watson. Bridgewater is coming off a 5-11 season as the starter for the Carolina Panthers. Before that, he had a great stint in relief for Drew Brees when he went 5-0. It remains to be seen which Bridgewater turns up this season. 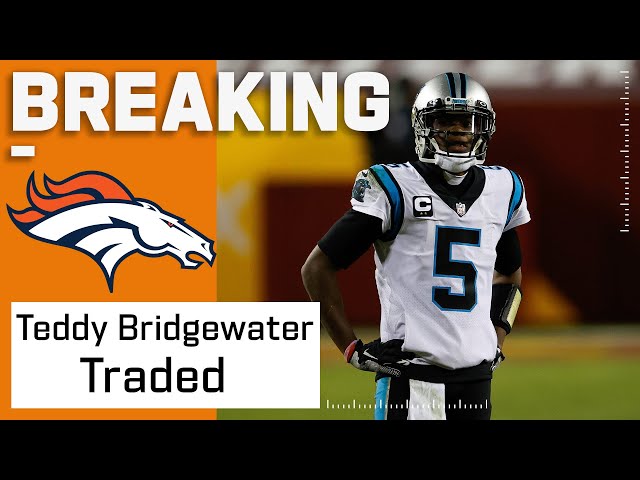 Bridgewater’s competition with Drew Lock could be one of the longest competitions of the preseason, assuming Aaron Rodgers or Deshaun Watson do not end up in Denver.

Phillip Lindsay’s loss was one of the biggest mistakes of the offseason for the Denver Broncos. However, they attempted to make up for it by drafting one of the top backs in the NFL Draft in Javonte Williams. Training camp could give an early indication of whether the Denver Broncos upgraded or downgraded at running back.

Denver’s Javonte Williams earns the second spot on this list:

“In 2020, according to Pro Football Focus, no FBS back forced more missed tackles on rushes than Williams’ 76.” https://t.co/A488AOVBQD

There could also be an outside chance that Williams pushes Melvin Gordon for the starting role. Overall, this is one of the juciest duels to watch when trying to evaluate the new Denver Broncos general manager George Paton.

For most of his career leading up to last season, Garett Bolles was one of the biggest misses in John Elway’s career as general manager. He was notorious for causing penalties in critical situations. In 2019, Garett Bolles had 17 penalties called on him.

But right around the time his rookie contract was nearing its end, Bolles stepped up his game. He earned a PFF grade of 90.6 and only had seven penalties called on him. Above all, he did not allow a sack. In response, the Denver Broncos signed him to a big four-year deal worth almost $68 million.

Now, after earning his big contract, the question is whether Garett Bolles can match up to the numbers in his contract. His performance in the 2021 training camp will be a big indication as to whether the Denver Broncos’ investment paid off.

Bobby Massie was seemingly signed as an act of desperation by the Denver Broncos after learning that Ja’Wuan James had suffered another potentially season-ending injury. Bobby Massie outlasted the first couple of months of free agency, so based on that alone, the feeling that the Denver Broncos have a quality player comes more out of hope than anything else.

That said, PFF has given his last few seasons respectable grades. In 2020, Bobby Massie earned a 72.6 PFF grade and played 470 snaps. He only had one penalty and allowed three sacks. The biggest question around Massie is whether he will allow fewer than six sacks this season, which is what he was on track for last season.