Marvin Vettori thinks Israel Adesanya is trying to misrepresent the hotel altercation between the two of them. The tense conversation between Vettori and Adesanya was caught on camera in the UFC 263 Embedded series.

Both fighters are known to have a genuine dislike for each other but neither of them made any aggressive gestures during the altercation. Marvin Vettori addressed Adesanya as a friend during the interaction, which has been interpreted in different ways by fight fans.

Israel Adesanya alluded to the fact that Marvin Vettori was intimidated by him, which resulted in a less aggressive interaction. Meanwhile, Vettori recently shared his side of the story while speaking to Adam Catterall of BT Sport.

Marvin Vettori stated that he wanted the champ to know that no pleasantries would be exchanged until the fight was over, which prompted him to ask Adesanya to bring the belt after shaking hands.

Vettori added that he addressed the champ as ‘friend’ afterward because it was the first thing that came to his mind and not because he felt intimidated. While claiming that Adesanya employs these tactics to enhance his own image, Marvin Vettori promised to derail his hype train at UFC 263.

“The only thing that came into my mind the moment I was leaving, I said something like, ‘See you, my friend,’ and then the only thing it puts up is this little part where I call him my friend. It’s so fake of him. I was actually doing that to bring him back to reality,” explained Marvin Vettori.

“He was trying to shake my hand and I’m like, ‘No man. I’m here to get your belt. Where’s my belt?’ So just these things where he feeds off of this. His whole image is fake. His hype is fake, his whole thing is fake and I’m here to expose it once and for all,” added Marvin Vettori. 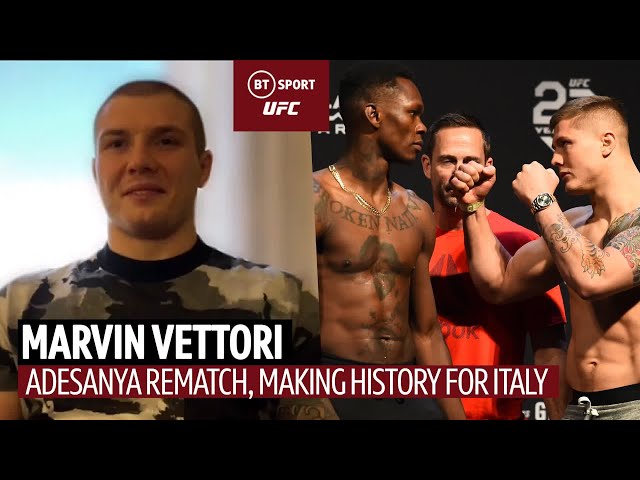 The fight is the rematch of their 2018 rematch, which Adesanya won by split decision. UFC 263 will take place at the Gila River Arena in Glendale, Arizona, where Adesanya and Vettori also fought the first time.

Vettori has won five fights in a row since the defeat and has scored wins over notable fighters like Jack Hermansson and Kevin Holland in his most recent outings.

Meanwhile, Israel Adesanya will enter the title fight rematch after suffering the first loss of his professional MMA career against light-heavyweight champion Jan Blachowicz in March. However, Stylebender is still undefeated at middleweight and last defended his strap against Paulo Costa at UFC 253 in September of 2020.

Can Vettori derail Israel Adesanya’s ‘hype train’ as promised? Let us know in the comments!