Minecraft recently released the highly anticipated Caves & Cliffs Update. Part 1 dropped on June 8th, with the second half coming sometime at the end of the year.

One of the features a lot of players were looking forward to was the addition of some new mobs. Mountain goats, glowsquids and axolotls are all new additions to Minecraft.

The axolotl, which is known as the “Mexican walking fish” in real life, has been added to Minecraft. It’s a passive aquatic mob that can attack other underwater mobs. These can be collected in buckets, just like salmon, cod, tropical fish and pufferfish, and placed anywhere else. They’ll have to be in an enclosed area though, because they do wander around.

Axolotls can be found in five different colors: Lucy (pink), Wild (brown), Gold, Cyan and Blue. The blue variant is extremely rare, with a .083% chance of spawning. Here’s how to get one.

Finally, after 14 hours of breeding over a thousand axolotls I finally have my blue axolotl! This almost felt like I was doing a pokemon shiny hunt pic.twitter.com/zP74aR8HH6 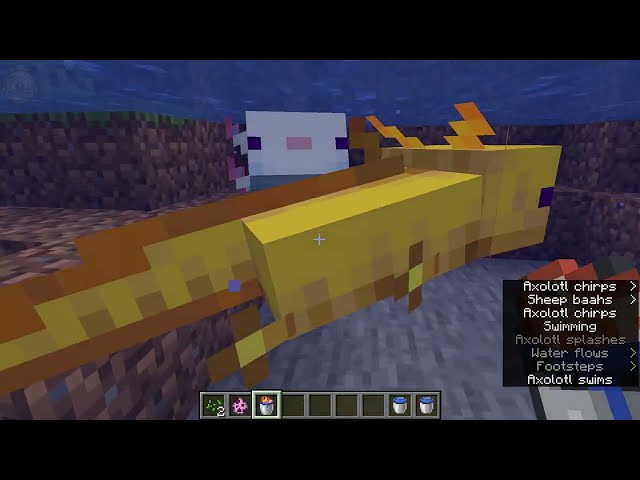 Finding a blue axolotl can be a challenge, though once players find one, it becomes easier to get from there. One of the ways is to just breed axolotls and hope they have a blue offspring.

The blue axolotl has a very low chance of spawning upon breeding, but players can breed multiple times (with a five minute break in between) to try and get one. This can take a long time, but there aren’t many other options.

Once players have a blue axolotl, though, it becomes much easier. Axolotl babies have a 50% chance of being the same color as one of the parents. The chances of getting a blue baby go up immensely when breeding with a blue axolotl.

I still don’t have the rare blue axolotl…
New objective!
I think it will take a lot of fish🤔 pic.twitter.com/TL2k8Yh2ZJ

Though this technically falls under “cheats” and thus disqualifies any achievements on the world, blue axolotls can be acquired with a command. The command for a blue axolotl is this: /summon minecraft:axolotl ~ ~ ~ {Variant:4}. Simply input that and a blue axolotl will be available in the world. Remember to capitalize the V and leave no spaces between the t, colon and the 4.

There is currently no way to control which color the axolotl is without using cheats, so the only alternative to a command is waiting and playing the long game. Axolotls, part of the Minecraft Caves & Cliffs Update, are available in-game now.