PSG.LGD might be the strongest team in professional Dota 2 right now.

They emerged victorious against Evil Geniuses in the WePlay AniMajor finals. As a clash between the finest, the finals of a Major are supposed to be an even back-and-forth. But this series was a clean three-nil sweep, as Evil Geniuses struggled to match PSG.LGD’s stellar drafting and execution.

Believe in yourself and believe in your teammates. #AniMajor, WE ARE THE CHAMPION!🔥This is the THIRD Major championship we’ve won, and also the first of our new team.
GGWP, @EvilGeniuses 👍🏻Not the end, but the beginning of a new journey. See you guys at Stockholm in August! pic.twitter.com/MPeNS3Ihvd

‘The curse of Arteezy’ lives on in Dota 2

Evil Geniuses (EG) are still at the top of the DPC points leaderboards. They were also the first Dota 2 team to get a direct invite to this year’s TI. They had been in some of their best form when they rampaged through all of their lower bracket opponents in the playoffs.

Their draft in the deciding match of the lower bracket finals did not augur well. They picked Terrorblade into Phantom Lancer with no other direct counters, a match-up with unfavorable precedents, i.e. PSG.LGD vs Nigma in round 3 of upper bracket playoffs.

But even with their top form, EG could not beat the champion of the Chinese Dota 2 scene. As the Dota 2 legend goes, Arteezy is cursed to always falter in the final leg of the tournament.

PSG.LGD have remained undefeated throughout the AniMajor. Moreover, they have consistently won the first match in every single series. This is testament to their preparedness as a professional team, and like always, they were ready for EG in the finals.

Having Wang ‘Ame’ Chunyu back as the carry has worked wonders for the team. Ame brings serious competition to EG’s Arteezy, who is considered the finest in the world when it comes to keeping up his net worth.

The opening fixture of the series was a reversal of EG’s last match before the finals, as Ame dominated EG with the carry Axe that he basically brought into the Dota 2 meta. It was the second match, however, that proves why they are the best.

The biggest factor is not how mechanically skilled Ame, Cheng ‘NothingToSay’ Jin Xiang, or Zhao ‘XinQ’ Zixing are. They have mastered the ultimate test of a Dota 2 pro team: playing well from a disadvantage. 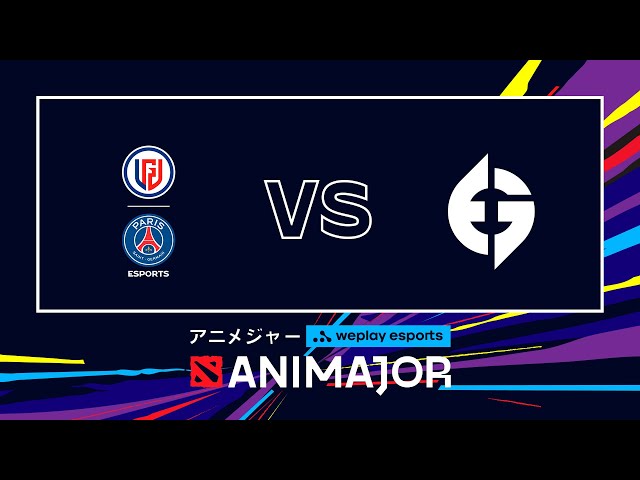 To put it bluntly, PSG.LGD were stomped by the strong lane-winning EG draft early on in game 2. They still managed to play the long haul and clinch the game with Ame’s Terrorblade, Arteezy’s signature hero this season. When EG finally got to draft Terrorblade for the next match, it was too late. The proverbial curse of Arteezy had taken seed.

PSG.LGD are the deserving victors of Dota 2 WePlay AniMajor. With their Clockwerk coordination and mechanical edge, they will be a top contender for The Internationals.