Players are scouring all over the map for Boomboxes in Fortnite because Epic has introduced a new Legendary quest in Fortnite Chapter 2 Season 7, where players need to locate one of the many of these Boomboxes.

One of the Week 3 challenges in Fortnite Chapter 2, Season 7, has players hunting and placing these Boomboxes in Believer Beach. Players need to find two of the Boomboxes out of four then place them on the beach to complete these legendary quests.

Believer Beach is a wide area of sand found in salty sands. Players should be aware of the possible UFO menace in this region. Salty Sands usually has a few UFOs gliding over it.

This article will guide players to all of the locations of Boomboxes in Fortnite Chapter 2, Season 7.

The location of every Boombox in Fortnite Season 7

Believer Beach has four Boomboxes scattered all over, and players need to find two to complete the quest. Since these Boomboxes are lit with a blue chroma, it is fitting to perform this challenge during the night.

Right off the bat, the very first boombox can be discovered in the southwest by the bus on the road. The second Boombox is close to this location so that it will be easier for players to speedily complete this quest. Players need to visit the West pier where the V and E of the Believer sign meet for the second Boombox.

The third Boombox can be found on the easternmost corner of the beach alongside some beach chairs. The fourth and the last Boombox is positioned in the northwest half of the town. It can be discovered just by the stage set up in Sweaty Sands. 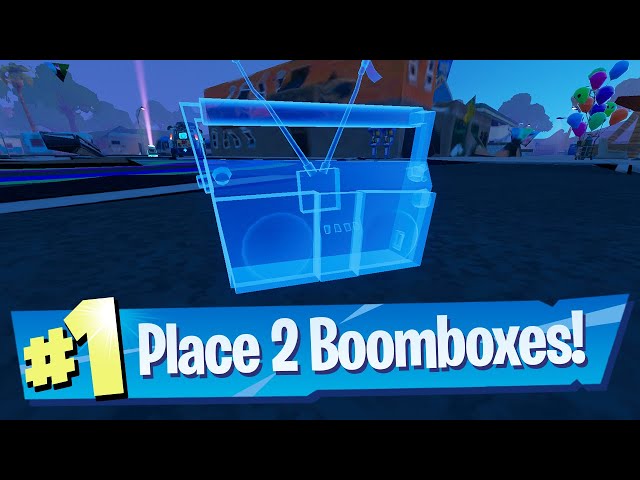 Players can collect any of these two Boomboxes and place them on Believer Beach to complete this Legendary Quest.

This season in Fortnite saw a lot of surprising collaborations, from Superman to Grandpa Rick. While the season is nowhere near its end, Epic might have a lot in store for players. It’s anybody’s guess what other enigmas abound in Fortnite Chapter 2, Season 7.