Ministers will confirm a pay rise for NHS staff later in a dramatic U-turn after the announcement failed to arrive in the Commons today.

Briefings had been swirling all week that health minister Helen Whately would reveal a 3 per cent hike in her statement to MPs.

But she did not give any clarity on the issue, merely saying that the government will set out its position ‘as soon as we can’.

Its omission from the government’s ‘NHS update’ this afternoon prompted furious backlash from Labour and trade unions, who branded it an ‘utter shambles’.

In a confusing development, Department of Health sources said they were still expecting the announcement to be made tonight.

The surprise omission raised the prospect that health workers could be left in the dark until September, as Parliament is due to break up for the summer from tomorrow.

Furious unions said they were ‘disgusted’ by the government’s silence, branding it an insult to NHS staff who ‘put themselves in harm’s way throughout the pandemic’.

The 3 per cent pay rise had already been dismissed by medics, with threats of strike action from surgeons and senior doctors. The Royal College of Nursing has called for a 12.5 per cent rise. 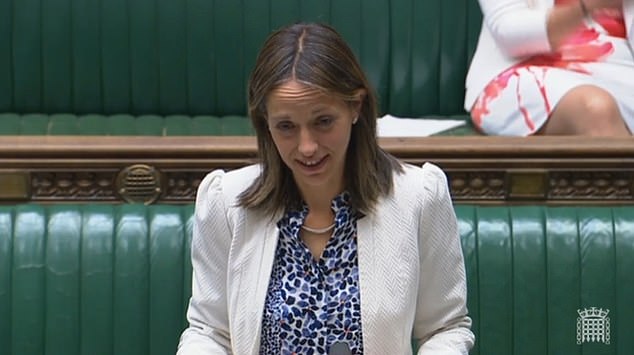 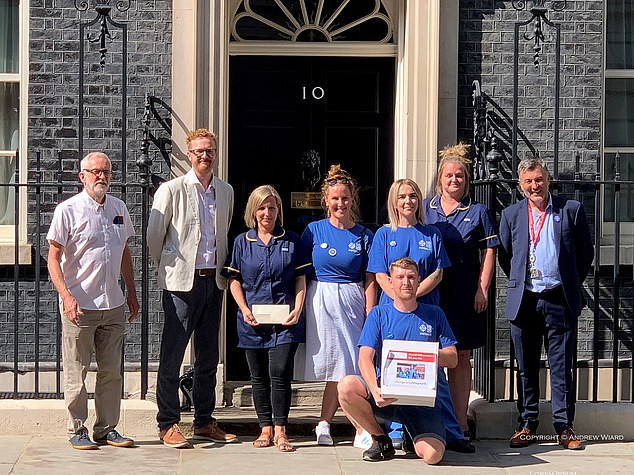 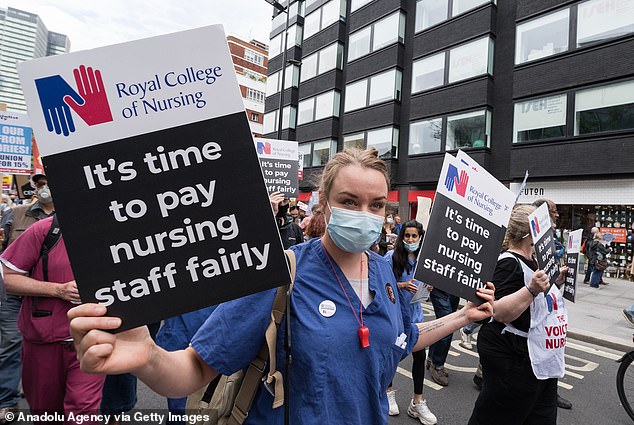 Unions have warned that an expected 3 per cent pay rise for NHS staff is not enough. Pictured, protests in London earlier this month

‘The government is seriously considering those recommendations, and we will be responding as soon as we possibly can.’

Repeatedly challenged by MPs on what had happened to the announcement, Ms Whately said: ‘We will be announcing our decision on NHS pay in due course.’

Labour voiced outrage at the absence of an offer for staff.

England’s backlog of patients waiting for routine treatment will take at least three years to clear, according to the departing boss of the NHS.

Sir Simon Stevens warned 13million people will be left needing care ‘if no action was taken’ — more than a quarter of all adults in England.

An all-time high of 5.3million people are already waiting for operations such as knee and hip replacements, with coronavirus having caused massive disruption across the health service.

Health Secretary Sajid Javid this week revealed he was ‘shocked’ at projections the waiting list could more than double in size by the end of the year.

Sir Simon, who will stand down from his chief executive role later this month, said it is unlikely to hit such high levels because the NHS won’t sit on its hands in tackling the backlog.

Shadow health minister Justin Madders tweeted: ‘Government say they cant afford to offer NHS staff more than 1 per cent, see the backlash so brief they are going to give 3 per cent but then come to Parliament to make a statement on it… and say nothing at all.

‘What an utter shambles.’

And shadow health secretary Jon Ashworth said: ‘After these past 16 months our brave, hardworking NHS staff deserve so much better than this insulting shambles.

‘Rather than a real terms pay cut Sajid Javid needs to get a grip and deliver the decent, fair pay rise NHS staff deserve.’

Labour MP Rosena Allin-Khan, shadow health minister and an A&E doctor in London, said the failure to deliver the pay rise before the summer recess was ‘an insult of the highest order’.

The government had been expected to offer NHS staff in England a 3 per cent pay rise today, after its initial offer of 1 per cent caused a furore.

Critics said a 1 per cent rise was effectively a pay cut because inflation levels are expected to rise above 1.5 per cent due to the pandemic.

The Royal College of Nursing (RCN) is demanding a 12.5 per cent rise, while trade union GMB is asking for at least 15 per cent.

At the start of July the British Medical Association advised ‘exhausted and demoralised’ members to take industrial action if the annual pay bump is not increased to at least five per cent.

Reacting to the government’s no-show today, Rachel Harrison, GMB’s national officer, said: ‘This is completely outrageous – virtually the last day of Parliament and the Government has insulted hard-working NHS workers once again by staying silent.

‘NHS staff have put themselves in harm’s way throughout the pandemic and as a health union we cannot accept MPs swanning off on holiday leaving health workers in limbo.

‘GMB has today written to the Prime Minister and Health Secretary to demand they intervene and set out their response on NHS pay before the summer recess.’

RCN acting general secretary Pat Cullen said the government needs to show it is ‘serious about filling the tens of thousands of vacant nurse jobs’. 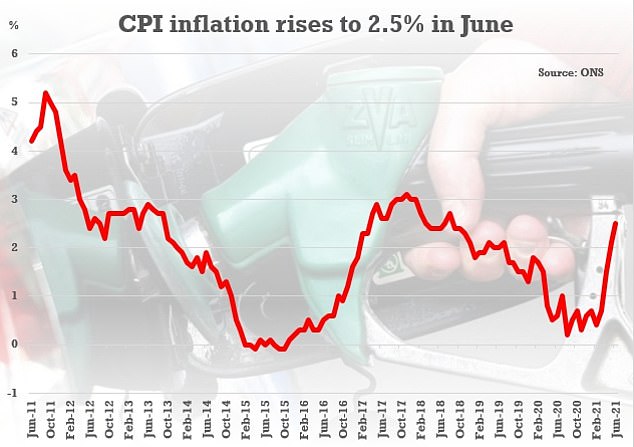 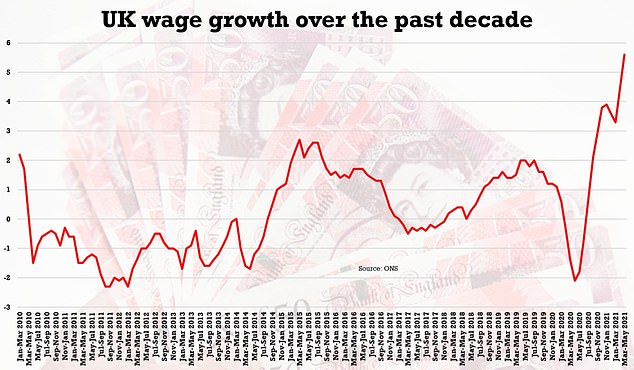 Surgeons and other senior doctors in England are threatening to strike if No10 does not improve the one per cent pay rise it proposed for NHS staff last year.

The British Medical Association said that the original offer was ‘little more than an insult’ after a year of battling the pandemic.

It will will advise ‘exhausted and demoralised’ members to take industrial action if the annual pay bump is not increased to at least five per cent. The BMA had originally been calling for a 12.5 per cent rise.

Striking would involve stopping all overtime, paid and unpaid. Doctors generally work up to 20 per cent over their contracted hours every week, the BMA said.

The move could be highly disruptive as the NHS tries to clear record backlogs triggered by the pandemic.

A record 5.12million people are on waiting lists in England for routine care, the highest since records began. Among them, 65,000 have been waiting for more than 18 months.

And there are early signs that hospital rates from Covid are picking up too, with 304 patients admitted with the virus on June 28, the latest data available.

This was a 35 per cent rise on the previous week but still a far cry from levels in previous waves of the Covid crisis.

Consultants, the most senior doctors in hospitals, have not taken any industrial action since the 1970s, apart from one day of action over pensions in 2012.

‘Low-level awards of a couple of percent would look timid and insult staff when the challenges they face have never been greater.’

The British Medical Association (BMA), which is asking for a more modest 5 per cent rise, has warned that doctors were suffering burnout.

Scotland has already announced a 4 per cent bump to most NHS staff pay, which will be backdated to December.

It includes nurses, paramedics, as well as domestic staff, porters, healthcare support staff and other frontline health workers. But it does not include doctors.

Unite national officer for health Colenzo Jarrett-Thorpe said: ‘If the Pay Review Body is recommending a 3 per cent pay rise, it is a small step forward on the insulting 1 per cent the Government offered in March.

‘However, this recommendation in no way recognises the 19 per cent drop in real earnings that many NHS workers have endured in the last decade, nor the immense sacrifices that health staff have and are continuing to make as Covid infection rates rapidly rise again.

‘It doesn’t match the 4 per cent the Scottish Government offered to NHS workers backdated to December 2020.

‘Three per cent will also do very little to staunch the escalating recruitment and retention crisis and free up resources to tackle the enormous backlog in non-Covid procedures, such as hip replacements.’

However it acknowledged that the figure was being inflated by job protection measures including the furlough over the past 16 months.

Because many workers were being paid not to work or had their hours drastically reduced, last year’s figures slumped massively.

But it means that as the economy opened up this year there was a counteracting increase as workplaces opened up again.

Viewed through this prism a three per cent pay increase may be seen as more generous as it might initially appear.

Striking would involve stopping all overtime, paid and unpaid. Doctors generally work up to 20 per cent over their contracted hours every week, the BMA said at the start of July.

However the move could be highly disruptive as the NHS tries to clear record backlogs triggered by the pandemic and the threat came before the current spike in Covid cases.

A record 5.12million people are on waiting lists in England for routine care, the highest since records began. Among them, 65,000 have been waiting for more than 18 months.

In March, then health secretary Matt Hancock infuriated NHS staff by claiming the 1 per cent pay offer for frontline staff was ‘fair’ and insisted no-one cares about nurses more than him.

He told the Downing Street press conference the offer, which medics have described as a ‘slap in the face’, was based on ‘affordability’ and that the pandemic had brought ‘financial consequences’.

Mr Hancock – who promised last year he would ‘fight’ to ensure the NHS was given a ‘reward’ in the aftermath of the pandemic – claimed he ‘bowed to no-one in his admiration’ for nurses, adding: ‘I learnt that at the knee of my grandmother who was a nurse.’