Genshin Impact version 2.0 was released a few hours ago, and players can start exploring the new region, Inazuma. With the release of this new update, new characters, weapons, and artifacts are now available.

In Genshin Impact 2.0, there is a new Archon Quest that gamers must complete to explore the Inazuma storyline. “Chapter 2 – The Immovable God and the Eternal Euthymia” is the first Act for the Archon Quest in the Inazuma region.

Guide to follow Keijirou without being noticed in Genshin Impact

Players will come across a task that requires them to follow Keijirou in the new Archon Quest, The Immovable God and the Eternal Euthymia. They can follow this step-by-step guide to tail him without him noticing.

1) Right from the beginning, players should keep a safe distance from Keijirou. They can make use of the crouch action to reduce the probability of being caught. For PC players in Genshin Impact, left-clicking the mouse will help crouch.

To stand back up, they can click the left-click mouse again.

2) It is important to note that Keijirou will occasionally turn around and can spot players. In this case, they should immediately run to other places outside of Keijirou’s vision, from where they can still observe Keijirou.

Gamers in Genshin Impact can ensure their safety once the eye icon above Keijirou’s head is not red anymore.

3) After walking a little from Ryouko’s stall in Genshin Impact, Keijirou will stop again and ponder for a few moments.

In this phase, players can stay put behind Keijirou until he starts walking again.

4) Keijirou will stop and turn around again for the third time once he is near the old house in Genshin Impact.

During this time, users can safely stay at the stairs above to avoid Keijirou’s sight.

5) After passing the old house, Keijirou will start running to the passageway leading to the beach.

When gamers reach there, they will automatically complete the quest in Genshin Impact. 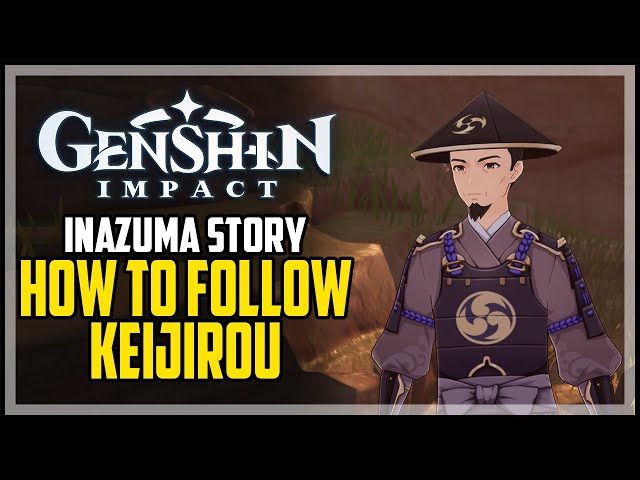