Rows of colourful tents, teepees and big tops are ready for the 40,000 people set to descent on the famous Latitude Festival from tomorrow – the first music event of 2021 in the world to be running at full capacity despite the pandemic.

Organisers are putting the finishing touches to the Suffolk event from July 22 to July 25 and anyone attending the four-day festival must show proof of a negative lateral flow test or double vaccination, allowing attendees can dance and hug safely.

The BBC Proms will also go ahead at full capacity this year, with audience members ‘strongly encouraged’ to wear masks and required to provide a negative lateral flow test, a positive PCR test or proof of double vaccination.

But in a blow to music fans, Glastonbury announced it will not be going through with a one-off 2021 event in September.

An enormous blue-and-white big top and a yellow-and-blue tent have also been put up for the huge festival at Henham Park, which will be the first to take place since the government lifted all limits on social contact.

Stages, fences, portaloos and vans and are now in place at the festival, which is set to be the first in the world to open properly with camping since the start of the pandemic. 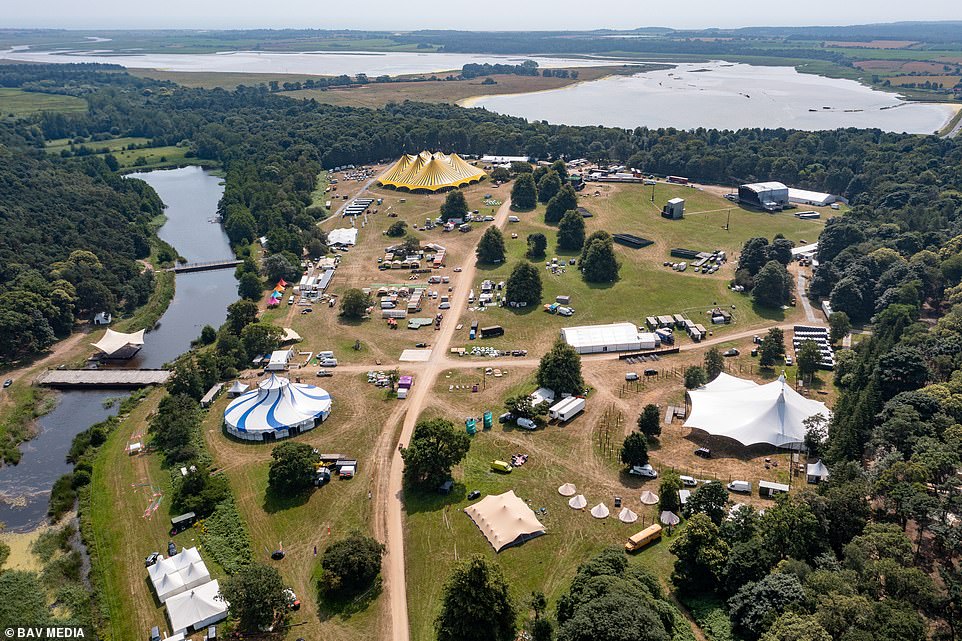 Henham Park in Suffolk where the Latitude Festival will take place with 40,000 music fans expected to arrive on Thursday for the Covid test event 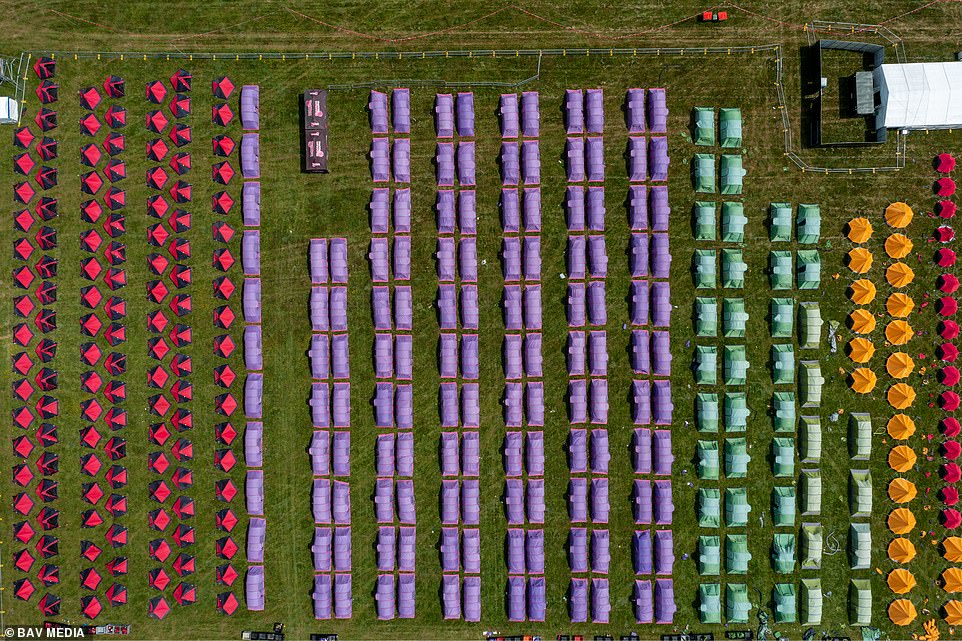 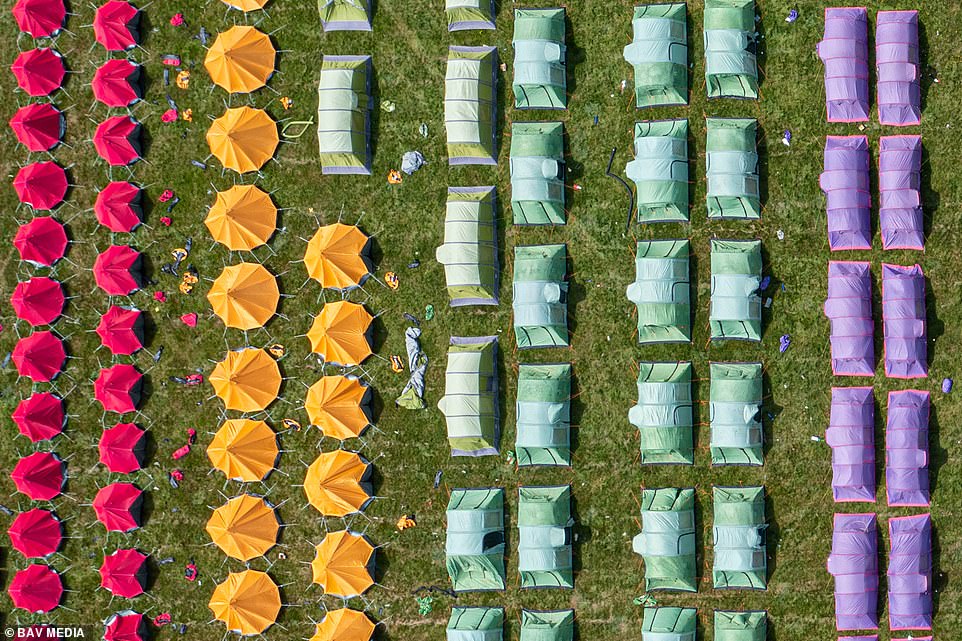 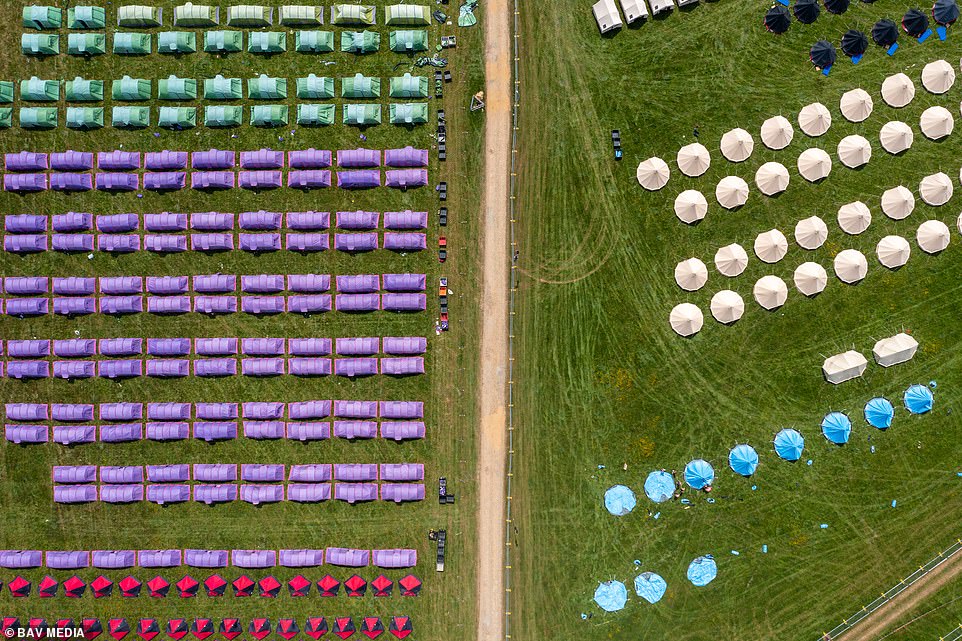 The safety rules means attendees can jump, dance and hug safely – and comes after the success of the Download Festival last month

Anyone attending the four-day festival must show proof of a negative lateral flow test or double vaccination, which means attendees can jump, dance and hug safely.

A statement on Latitude’s website says: ‘We have been working extremely hard to make sure that Latitude Festival can go ahead safely at full capacity.

‘After much discussion with the Government, I can now officially announce that we will be going ahead and that we will be joining the 3rd phase of the Event Research Programme as a test event.’

It adds: ‘After many months without live music and arts, we are ecstatic to return with a full capacity festival. Restarting festivals is crucially important to the wellbeing of everyone in society and we hope that Latitude will be the first of many festivals to take place this summer!’

The BBC Proms will also be taking place at full capacity, with promming tickets, where audience members can stand in the arena or gallery areas of the Royal Albert Hall, also be available on the day of each concert.

The 2020 edition featured a reduced orchestra playing to an empty auditorium due to coronavirus restrictions – with the singers placed in the stalls to ensure social distancing.

The return of the fully-fledged event will feature 52 concerts over 44 days featuring 30 orchestras and ensembles, more than 100 soloists and conductors and more than 2,000 musicians.

A statement from the broadcaster said: ‘The safety of our audiences is our main priority and we are taking every step we can to open the Proms safely without social distancing.’

Audience members over the age of 18 will be asked to provide a negative lateral flow test taken within 48 hours of the performance, or evidence of double vaccination provided via the NHS App or a letter provided by the NHS.

They can also offer proof of natural immunity based upon a positive PCR test taken within 180 days of the performance.

Audience members under the age of 18 will be asked for verbal confirmation from a parent or guardian that they have not received a positive test. 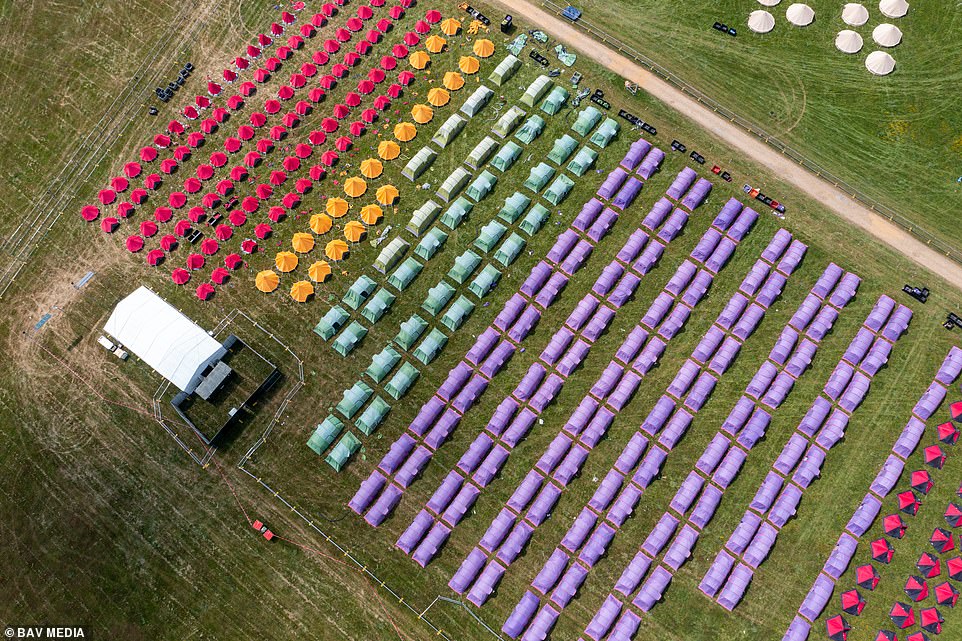 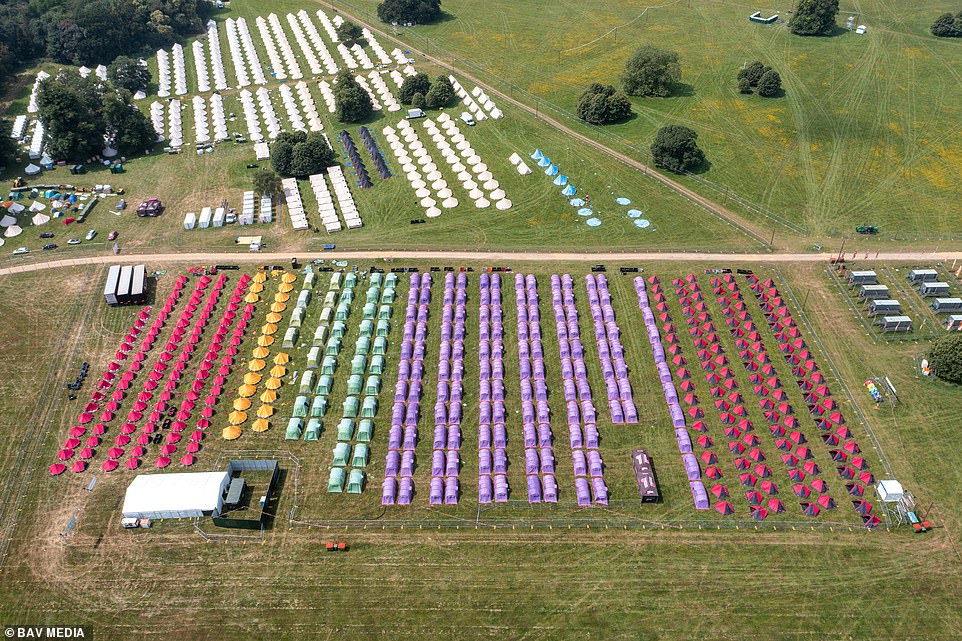 This year’s programme includes a First Night premiere of Sir James MacMillan’s companion piece to Vaughan Williams’s Serenade To Music, co-commissioned with the charity Help Musicians and performed by a quartet of British singers.

The BBC Proms opens on July 30 and runs until September 11.

Glastonbury has now been canned, however, in news that will be a significant blow to thousands of devotees.

In May, Mendip Council gave the green light to a scaled-down concert at Worthy Farm featuring 50,000 attendees, a quarter of the usual number, and no camping.

Co-organiser Emily Eavis said the event would be a larger version of the Pilton Party, an annual fundraising concert for villagers, workers and local residents, and would be called Equinox.

However, she has now announced the concert will not happen due to ‘a number of reasons’. 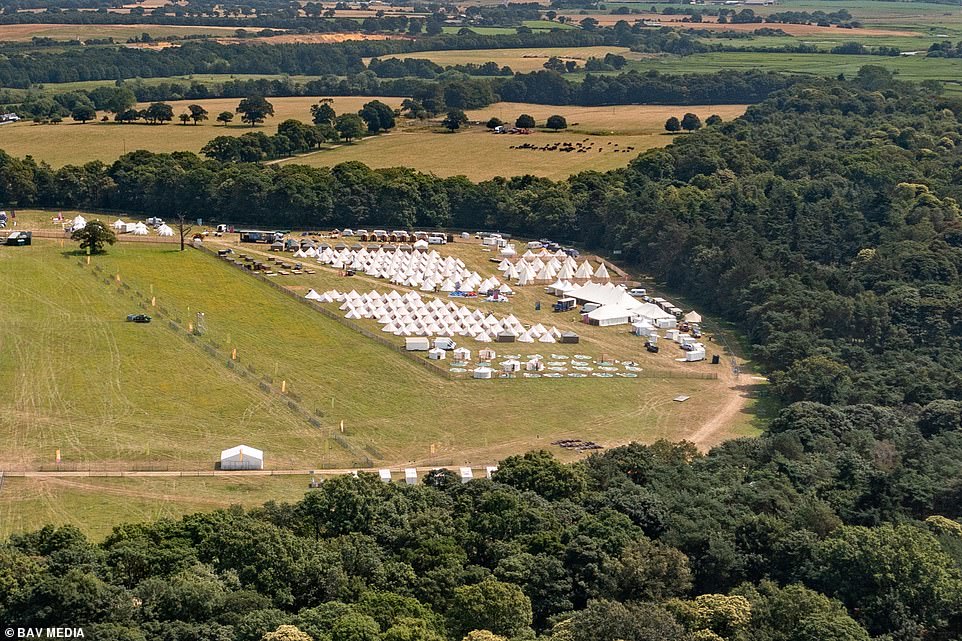 Stages, fences, portaloos and vans and are now in place at the festival, which is set to be the first in the world to open properly with camping since the start of the pandemic

She wrote on Instagram: ‘Three days until we open the @worthypastures gates and it’s looking so lush on the farm.

‘We’ve decided not to go ahead with the September gig idea for a number of reasons, so we’re putting all of our energy into the campsite for now! See you in a few days…’

Worthy Farm is operating as a family-friendly campsite this summer, although live music and sound systems are banned.

Eavis had not provided information on the intended capacity, line-up or ticketing of the September event.

The regular Glastonbury Festival usually takes place in June and attracts around 200,000 people.

It comes after the festival was cancelled for a second consecutive year due to uncertainty around coronavirus restrictions. 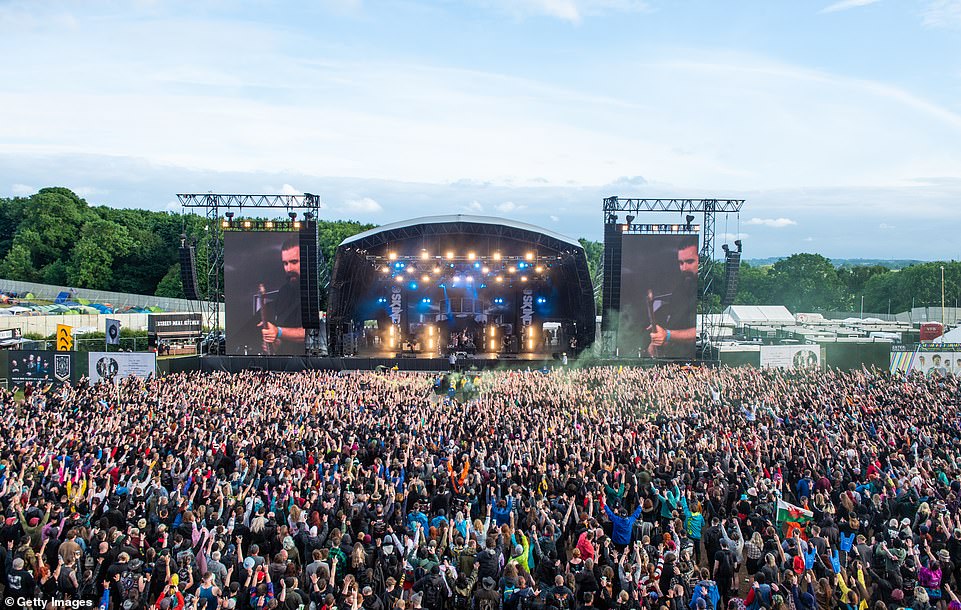 Melvin Benn, managing director of the Festival Republic group, said the level of compliance he saw during the Download Covid test event last month was ‘extraordinary’

It comes weeks after the organiser of Download Festival said its success last month is ‘100 per cent evidence’ that big music events can take place safely amid the Covid-19 pandemic.

Melvin Benn, managing director of the Festival Republic group, said the level of compliance he saw during the Covid test event was ‘extraordinary’, adding that the festival was proof music events could be Covid secure.

The festival took part as a Government test event to see how Covid transmission takes place in crowds, which gave people a taste of normality as fans did not have to wear masks or socially distance.

Crowds, who had to provide a negative PCR test before arrival, were allowed to mosh and hug at the camping-only festival as they were freed from strict Covid regulations while onsite.

But the rock and metal event’s capacity was reduced by 90 per cent from 111,000 to around 10,000 as it was allowed to run as a smaller pilot event rather than being cancelled for the second year running.