A police misconduct panel has found a married veteran PC raped a vulnerable single mother – but was not charged after senior officers ruled it out.

Now-retired Geoff Lloyd, who is also a father-of-one, was accused of sexually assaulting the young woman before telling her the next morning ‘You really didn’t want that did you?’.

The Cambridgeshire Constabulary officer was said to have gone on to complain ‘You made it hard for me’ before then sending her sister a message saying he thought she had mental health issues.

While the woman, now 31, did not report the August 2015 incident at the time, in June 2018 the Police Standards Department began investigating him over a different matter.

Lloyd – who denies any wrongdoing – was arrested on suspicion of Misconduct in a Public Office and Computer Misuse and interviewed under caution.

It was during this investigation contact with two women was discovered and on December 12, 2018, one made the allegation of rape.

But when the criminal investigation finished on April 30 the next year the decision was made the allegations did not meet the evidential test to be sent to the Crown Prosecution Service.

Details of the case can be revealed by MailOnline this morning after the police panel published its findings on Lloyd and said he would have been dismissed. His wife attended with him and gave a character statement supporting him saying he was ‘caring and helpful to everyone’.

The panel ruled: ‘We have found that in August 2015, he forced sexual intercourse upon her to which she had not consented.

‘It also seems to us that the fact that he was ‘besotted’ – or obsessed – by her should be recognised.

Pc Geoff Lloyd was a police officer at Cambridgeshire Police, whose HQ is pictured here

‘In our view there is nothing in the evidence before us to suggest that Mr Lloyd has been, or will ever be, able to recognise that his behaviour was wholly inappropriate for someone working in a position of public service and trust.’

Text messages from Lloyd to the woman

Lloyd – who failed in his attempt to make the hearing private over an acute medical disability – joined Cambridgeshire Police on January 27, 2003, but retired in December 2018 after 17 years of service.

The Cambridgeshire Police officer had met the woman in September 2008 when she was just 19 and involved in a road traffic accident.

She was described as being ‘lonely and vulnerable’ and became dependent on him as he pursued the relationship, the lady – who cannot be named – only discovering he was married at the misconduct hearing.

In finding Lloyd had forced sex onto her in August 2015 it had to consider why she remained friends with him afterwards.

The panel – chaired by Siobhan Goodrich – said he had moved to ‘manipulate her by trying to make her feel sorry for him’.

A poorly spelled October 7, 2015, message to her read: ‘I really thought we were together 2 months ago and thought at last, after 6 years things were beginning to work. X I never gave up hope But I don’t think ul ever really want me, and I’m always afraid of you changing again, anyway x I think so much of you, that it just hurts more to have contact like this and not be with u.

‘So I’ll do what you suggest and go the other route now. I’m no good at being alone. I know what I want bur I guess it won’t happen now….’ 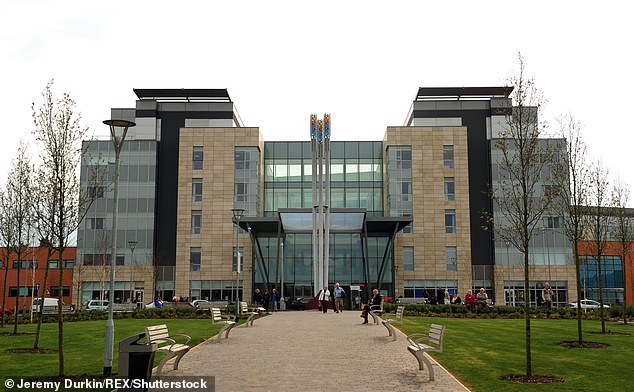 The hearing found at one point Lloyd boasted about targeting her ex boyfriend and even stopped his car in what it described as him ‘Trying to be viewed by her as a ‘hero’ or her rescuer’.

He said in WhatsApp messages: ‘My mission over the next couple of weeks is to make sure the fat bald headed c*** with a red warning light on top of him gets thorough nibbled’.

Lloyd later added ‘Did you say BBC will leave the school between half 8 and 9 tomorrow? … Planning my day’ and ‘BBC is a lot more important than a bloody knife point robbery’.

The panel also found he sent force-related pictures to her on his phone.

They included one of a road traffic collision and a police incident screen.

A second woman – who also formed part of the investigation – also claimed he had sent her a picture of his penis and attempted to kiss her in a car.

She had been working at Peterborough Hospital and had told him she wanted to join the police and he encouraged her to sign up for a Ride-Along scheme where she could join him on a call-out.

The panel said: ‘In our view he exploited her desire to join the police with a view to his own sexual gratification.

‘He abused the trust placed in him by the police service in connection with the Ride-Along scheme. He was on duty performing a public-facing role, and one in which he should have been acting with complete professionalism at all times.

‘Instead, he used the power which he had by virtue of his role as a police officer, to try and take sexual advantage of her. This was a situation which plainly involved an imbalance of power and authority. His behaviour towards her was predatory.’

Lloyd did not give live evidence to the misconduct panel – due to his disability and medical condition – but earlier statements made by him denied any wrongdoing.

He said he had only had sex with the young woman once when she initiated it and they had an ‘on and off’ affair for about 6 years between 2012 and 2018.

Lloyd denied screenshots he sent to her relating to her work breached professional standards.

The second woman he said had been his friend but he stopped contacting her when she tried to start a relationship.

Lloyd denied her account of sexual contact or attempting to kiss her and said it was untrue he had sent naked pictures of himself to her.

Cambridgeshire Police has not yet responded to further request for comment.