Spending more than four hours a day sitting in front of the TV increases your risk of obstructive sleep apnoea — and resulting snoring — by 78 per cent, a study found.

Researchers with the Harvard Medical School monitored the health and physical activity levels of some 138,000 people for 10–18 years.

They found that increased levels of sedentary behaviour — and corresponding low levels of physical activity — increased the risk of obstructive sleep apnoea (OSA).

People who spend all day sitting down, such as in office jobs, should compensate by getting more exercise during their leisure time, the researchers recommended.

Sleep apnoea is a condition in which one’s airways can become completely blocked at night, interrupting normal breathing and leading to snoring and disrupted sleep.

If untreated, it can increase the risk of cancer, glaucoma, heart attacks, high blood pressure, strokes, type 2 diabetes and cognitive and behavioural disorders.

Experts have estimated that, globally, around 1 billion adults aged between 30–69 are affected by mild-to-severe obstructive sleep apnoea. 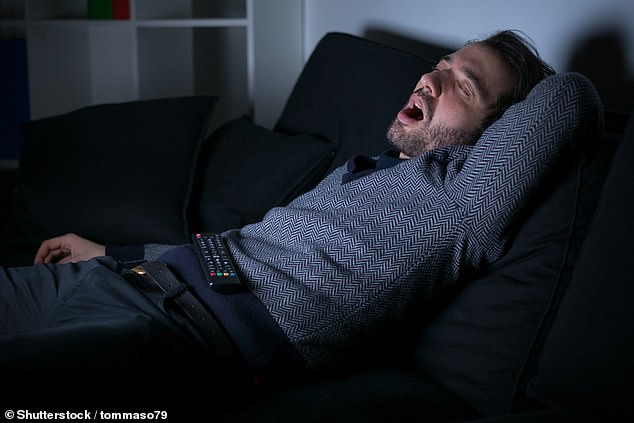 Spending more than four hours a day in front of the television increases your risk of obstructive sleep apnoea — and resulting snoring (pictured) — by 78 per cent, a study found

‘Importantly, we saw that any additional increase in physical activity, and/or a reduction in sedentary hours, could have benefits that reduce the risk of developing obstructive sleep apnoea.’

‘The difference in OSA risk between sedentary work and time spent sitting watching TV could be explained by other behaviours that are related to those activities.’

‘For example, snacking and drinking sugary drinks is more likely to go along with watching TV compared with being sedentary at work or elsewhere, such as sitting during travelling.’

‘This could lead to additional weight gain, which we know to be a risk factor OSA.’

In their study, Professor Huang and colleagues monitored the health of more than 138,000 US adults for between 10–18 years.

While none had obstructive sleep apnoea at the start of the investigation, 8,733 participants had been diagnosed with the condition by the end of the study period.

After accounting for potential confounding factors — include age, body mass index and alcohol/tobacco usage — the team found that participants found that those who engaged in more physical activity had a significantly lower risk of developing OSA.

Specifically, those who did the equivalent of three hour’s worth of running per week were 54 per cent less likely to develop the disorder than those who only got the equivalent amount of exercise as walking for two hours a week.

The researchers cautioned that the current study relied on self-reported health data — and that future work would benefit from collecting data instead by means of wearable health-monitoring technologies.

‘Obstructive sleep apnoea is a common and pervasive disorder that can have a serious impact on the quality of people’s lives,’ said European Respiratory Society president Anita Simonds, who not involved in the present study.

‘Although OSA can be managed with modern treatments, only a minority of studies focus on prevention,’ the respiratory and sleep medicine expert from the Royal Brompton Hospital added.

‘Health professionals should prioritise prevention and support people who are at-risk of developing OSA to be more active before it is too late.’

‘This study adds to the evidence on the importance of maintaining an active lifestyle on preventing lung disease, and it is encouraging that even a small increase in physical activity or reduction in sedentary hours could reap potential benefits.’

‘It is therefore an important message to get across to our patients and their families in primary care and respiratory clinics.’

The full findings of the study were published in the European Respiratory Journal.

Obstructive sleep apnoea (OSA) occurs when the walls of a person’s throat relax and narrow during sleep, blocking their airways.

This interrupts normal breathing, with symptoms including loud snoring, noisy and laboured breathing, and repeated episodes when breathing is interrupted by gasping and snorting.

OSA affects between four and 10 per cent of people in the UK. In the US, around 22 million are affected.

During an episode, the lack of oxygen triggers a sufferer’s brain to pull them out of deep sleep so their airways reopen.

These repeated sleep interruptions can make the person very tired, with them often being unaware of what the problem is.

Risks for OSA include:

Treatment includes lifestyle changes, such as loosing weight, if necessary, and avoiding alcohol.

In addition, continuous positive airway pressure (CPAP) devices prevent the airway closing by delivering a continuous supply of compressed air through a mask.

A mandibular advancement device (MAD) can also be used, which is like a gum-shield that holds the jaw and tongue forward to increase the space at the back of the throat.