T. J. Dillashaw returns to the octagon after two long years at UFC Vegas 32. The former two-time bantamweight champion is expected to fight for the title soon if he manages to get past No.2-ranked Cory Sandhagen on July 24.

That said, T. J. Dillashaw thinks very little of current bantamweight champion Aljamain Sterling. In a recent UFC clip titled ‘Bantamweight Breakdown,’ Dillashaw talked about, among other things, what he thinks of the current 135-pound champion.

“Aljamain Sterling is a fake champ, in my opinion. He got the belt, but he ain’t the champ, he knows it. Petr Yan, I think I’ll be beating him for the UFC belt. Yeah, I mean [if] they match me up with the guys that are fighting for the belt right now, it’s easy work,” T. J. Dillashaw said.

The controversial nature of Aljamain Sterling’s title win has left the MMA community divided. ‘Funkmaster’ ended up winning the bantamweight title at UFC 259 after Petr Yan threw an illegal knee in the fourth round and got himself disqualified, losing the title in the process. Since this was the first time a belt changed hands due to disqualification, many fans and experts want there to be a rematch between the two.

However, with Aljamain Sterling out of action for a few months as he recovers from neck surgery, the bout is unlikely to go down anytime soon. During this time, fans can expect Aljamain Sterling and Petr Yan to continue trading barbs on social media on the legitimacy of Sterling’s championship.

The guy laughing stock has the belt. You fought your first Top 5 opponent and were to stupid to win, even with a fatigue advantage. I can’t wait to slap the shit outta you https://t.co/kRkuL3VK8V 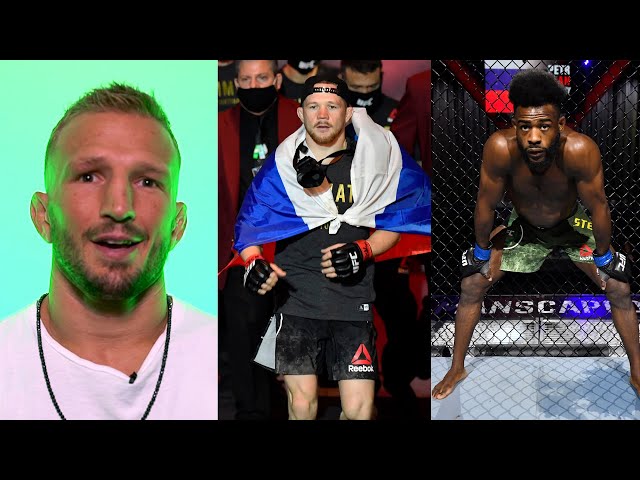 ‘Lieutenant Dan’ is set to face Cory Sandhagen at UFC Vegas 32 on Saturday, July 24. According to Dillashaw, this bout is the unofficial title fight in the bantamweight division at the moment.

“I think this is the true title fight right now. I think the biggest challenge for me in this division is my next fight, Cory Sandhagen. Mad props, Cory Sandhagen, he has done great with his career. I’ve been rooting for him for a long time, but he has met his match,” T. J. Dillashaw added.

This will be T. J. Dillashaw’s first appearance in the octagon since losing to Henry Cejudo in January 2019, after which he tested positive for EPO and got suspended for two years.