Black Lives Matter has given a senator an ultimatum – either he renounce his family’s ties to an allegedly all-white beach club, or they start protesting outside of his home and office.

In an exclusive interview with WLNE, Mark Fisher, one of the directors of Black Lives Matter Rhode Island, said the organization has not forgotten about comments Senator Sheldon Whitehouse made last month, in which he said that all-white clubs are a ‘tradition’ in the state.

The senator was replying to a question about his wife’s membership to Newport-based Bailey’s Beach Club, which he has previously said lacked diversity.

Bailey’s Beach Club, run by the Sprouting Rock Beach Association, has since dismissed the claims that it is an all-white club, saying in a statement to the Providence Journal:  ‘Over many years, Club members and their families have included people of many racial, religious, and ethnic backgrounds from around the world who come to Newport every summer.

‘Our membership comes from all over the globe to our small club and we welcome the diversity of view and background they bring to our community.’

Information about the club’s membership, though, is private and it remains unclear how many members, if any, the club currently has. 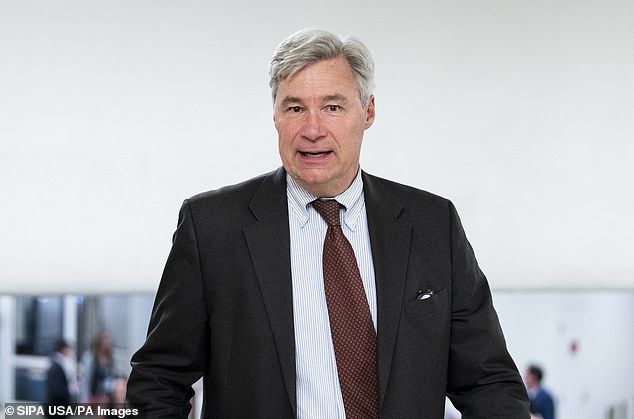 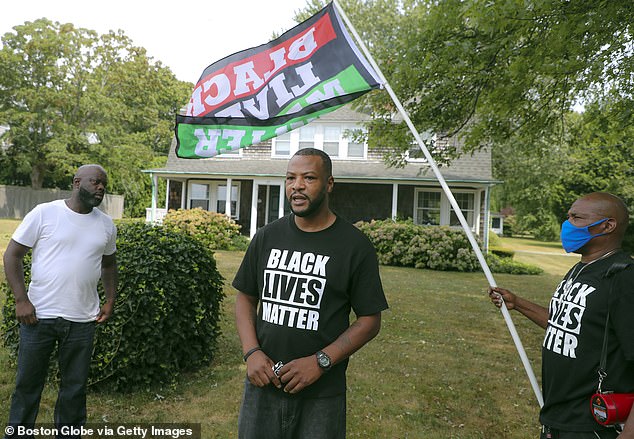 Mark Fisher, senior director of Black Lives Matter Rhode Island, center, said on Wednesday that if the senator does not renounce his family’s membership to a reportedly all-white beach club, the organization will protest outside his home and his office 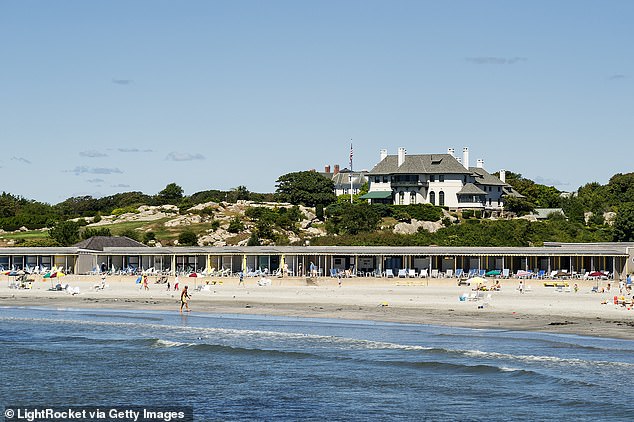 ‘This is an issue that’s not going to go away, and Senator Whitehouse needs to address it, he needs to take it on,’ Fisher said in the interview Wednesday.

‘If he thinks we’re just going to forget about it, if he thinks that this is going to get swept under the rug – it’s not.’

‘It doesn’t matter, you know, what type of black people he brings in,’ Fisher continued.

‘This club is a proven racist club with exclusive ties to white supremacy and exclusion,’ he claimed, ‘and that’s not gonna be tolerated by me, my associates, my affiliates or my organization.’

Fisher announced Whitehouse now has until Friday to denounce his family’s decades-long ties to the beach club, or the organization will start protesting.

DailyMail.com has reached out to Whitehouse’s office for comment. 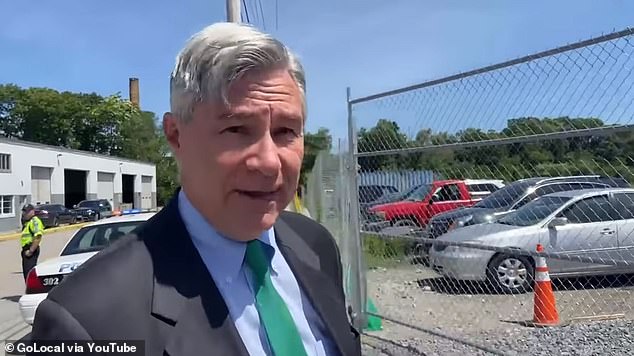 Last month, the senator apologized for the lack of diversity at the beach club in an interview

Fisher’s ultimatum comes more than one month after the 65-year-old Democratic senator came under fire for accepting a local reporter’s premise that the Bailey’s Beach Club in Newport had no minority members.

He was confronted at the time by a GoLocalProv.com reporter about his family’s membership at the club and was asked if it was now accepting minority members.

‘I think the people who are running the place are still working on that and I’m sorry it hasn’t happened yet,’ he said.

When asked if all-white clubs should still exist in 2021, Whitehouse said: ‘It’s a long tradition in Rhode Island and there are many of them. And I think we just need to work our way through the issues.’

The senator has since said he was flustered by the reporter’s question.

‘I was attending an unrelated event and wasn’t prepared for the question. At the time, I made the mistake of accepting her premise,’ Whitehouse told Fox News a few days later.

‘I then checked the assertion and was assured that, first, the assertion was wrong, there is diversity in the membership and there are non-white club members; and second, that improving diversity remains a priority and an active task for the club’s new board.’

He later claimed to the Providence Journal that the club has been ‘on the right side of pushing for improvement,’ and noted, ‘my relationship with my family is not one in which I tell them what to do.’ 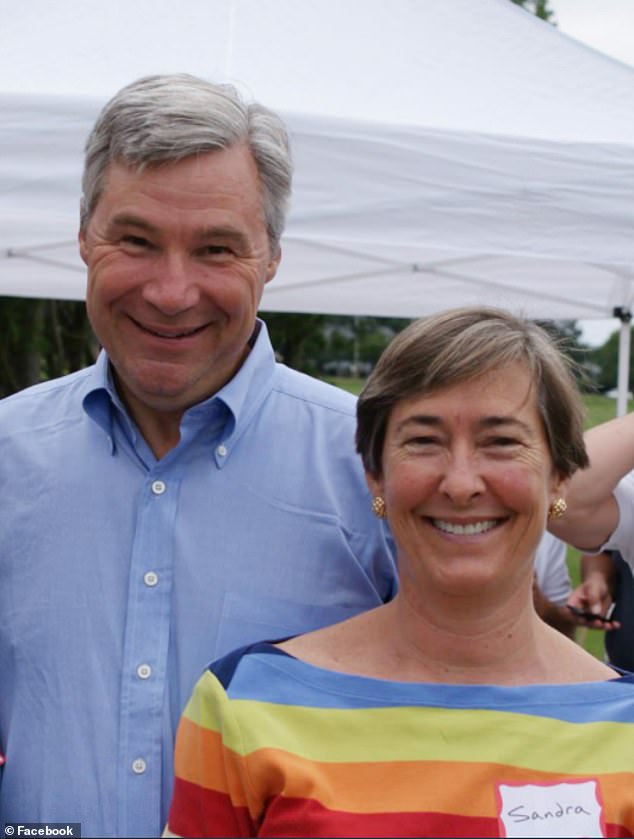 Whitehouse, his wife Sandra Thornton Whitehouse and their families have been members of the club for decades. The senator transferred his shares in the club to hers several years back 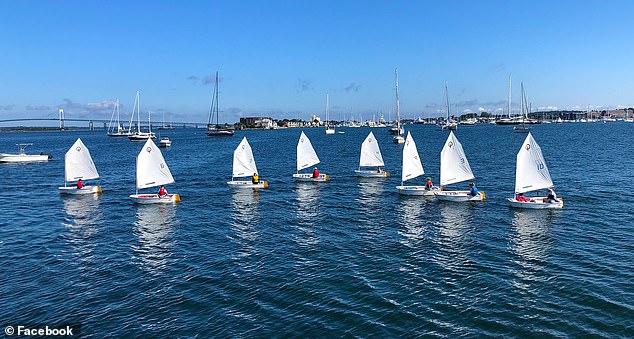 The senator, admitted, however, he is a member of the Ida Lewis Yacht Club, and apologized for ‘failing to address the sailing club’s lack of diversity’

The senator is not a member of the club, he noted, having transferred his shares to his wife, Sandra Thornton Whitehouse, in 2017, after he said he would take up the issue of diversity with the club ‘privately.’

But, he admitted, he does belong to the Ida Lewis Yacht Club of Newport, and apologized for failing to act on its ‘lack of diversity.’

‘Failing to address the sailing club’s lack of diversity is squarely on me, and something for which I am sorry,’ Whitehouse said in a statement. ‘I commit to working with the club and the community to build a more inclusive membership and to better connect with the local community.’

He added: ‘There have been calls for me to resign from the club, which I understand. However, I have no membership, nor will I ask my wife or any other family members to do so.’

The Whitehouse family has had a membership at the club for more than two decades, and Sandra is now one of the top shareholders in the club. She is said to visit it daily during the summer. 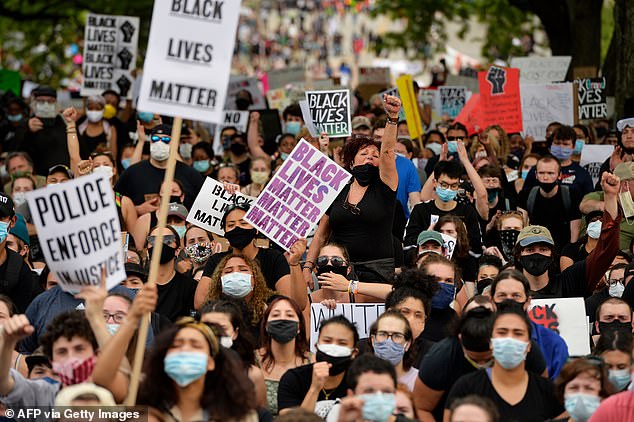 Black Lives Matter Rhode Island founder Gary Dantzler said the senator had an opportunity to ‘rally and adapt to what’s going on’ months ago, as people protested in the streets following the police-involved death of George Floyd

‘The senator says he’s about systemic change in America, but the problem that I have it that it’s almost a contradiction,’ Dantzler told the Washington Post.

‘Someone with that power that we elected to be our senator, our watchdog, he’s not fulfilling the part of being transparent to African Americans, so I have a huge problem with that.’

‘It’s not just him,’ he added. ‘It’s a huge cesspool of politicians that are failing our communities.

‘And you had the opportunity months ago to rally and adapt to what’s going on when you said you’re for George Floyd and the mission while we screamed for African American liberation.