Australia’s desperate bid to ramp up coronavirus vaccination rates will get a shot in the arm from September, with major sporting stadiums and carparks across the country to be transformed into vaccine hubs.

The Federal Government will also commandeer shopping centres and schools, turning them into drive-thru vaccination clinics as they prepare to send ‘flying squads’ of nurses into workplaces offering Pfizer and AstraZeneca jabs to employees.

Under the inoculation blitz, participating pharmacies will stay open long into the night and on weekends to offer the life-saving shots to the public, with Scott Morrison gunning for a vaccination rate of 80 per cent in order to forgo the country’s ongoing cycle of rolling lockdowns.

There is also a strategy to fast-track jabs for those aged under 40 who are now the ‘peak transmitters’ of the Indian Delta strain.

But with about 10 per cent of the population already considered to be ‘vaccine-hesitant’ and a growing number anti-vaxx propagandists spewing worrying misinformation online, reaching the target may prove a challenge.

However Australia’s top counter-terrorism cop has vowed to crack down on dangerous groups inciting violent resistance to vaccination and lockdowns. 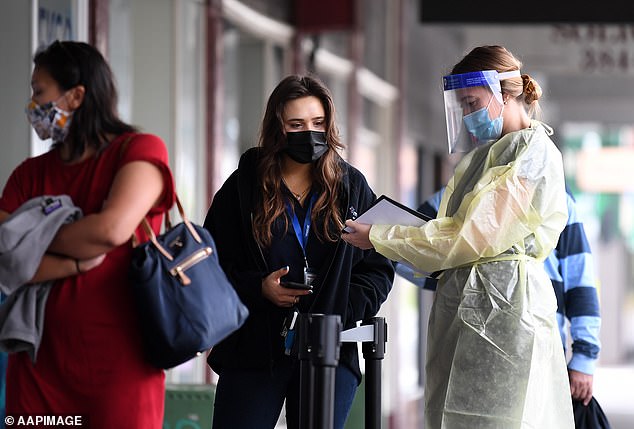 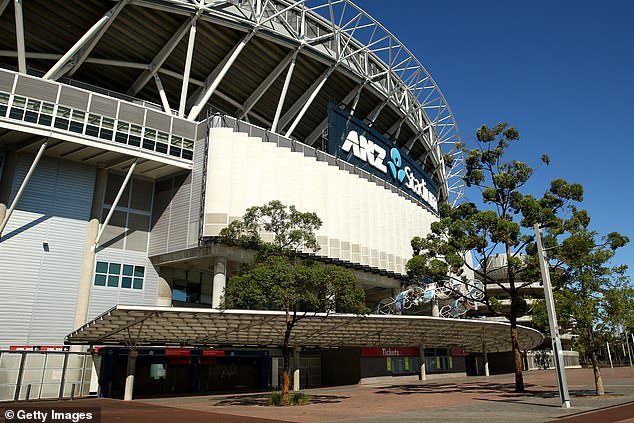 Major sporting stadiums and carparks across the country will be transformed into Covid vaccine hubs (pictured, Sydney’s ANZ Stadium)

Mr Morrison on Tuesday said an 80 per cent vaccination rate would make lockdowns ‘almost completely unnecessary’ and allow the nation to treat Covid like the flu.

‘There will always be infectious diseases resulting in hospitalisation, and indeed in death,’ he said.

‘That is something that happens, sadly, each and every day, that is the world we live in, and I think Australians understand that.’

Government modelling by the Doherty Institute said that a 70 per cent vaccination rate could be achieved by October 18 if AstraZeneca doses are given four weeks apart, and 80 per cent could even be vaccinated by November 8.

If doses are given 12 weeks apart then the latest date an 80 per cent rate is predicted to be reached is November 22.

Under Mr Morrison’s four-stage re-opening plan, a state or territory can remove the need for restrictions when the national vaccination rate hits 70 per cent and the rate in that state also hits 70 per cent. 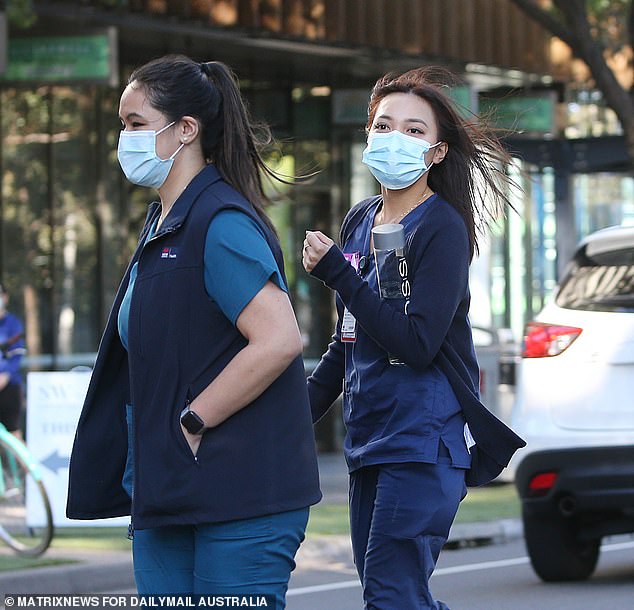 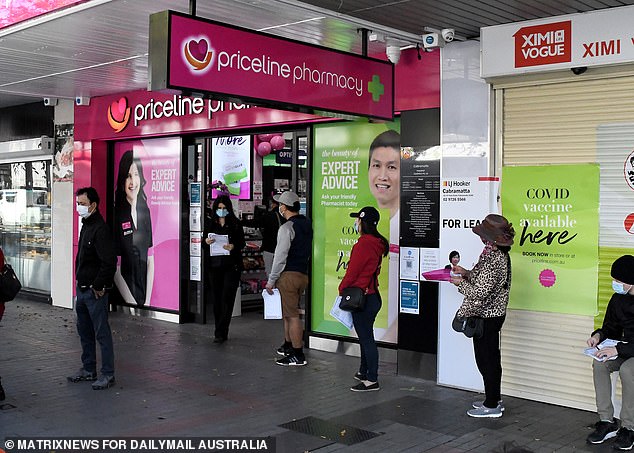 Nations with the the most vaccine doses:

But in order to get there, a massive immunisation blitz is required.

A push to turn major sports stadiums into vaccination clinics is now underway, with the first pilots set to begin in mid-September before spreading right across the country by mid-October.

Workplace vaccinations, where ‘flying squads’ of nurses swoop in on businesses offering jabs, are also scheduled to begin by late September, but the initiative won’t kick into full force until late November.

It is a similar story for supermarkets, shopping centres and schools, with pop-up vaccination hubs being prepared for late November. 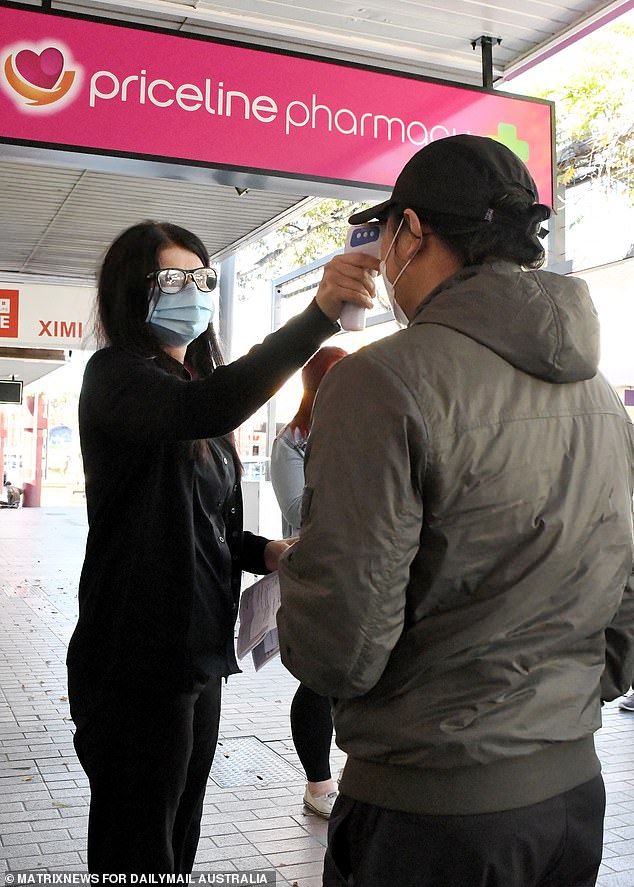 Under the inoculation blitz, participating pharmacies will stay open long into the night and on weekends to offer the life-saving shots to the public. Pictured: A person has their temperature checked before entering Priceline Pharmacy in Sydney’s Cabaramatta 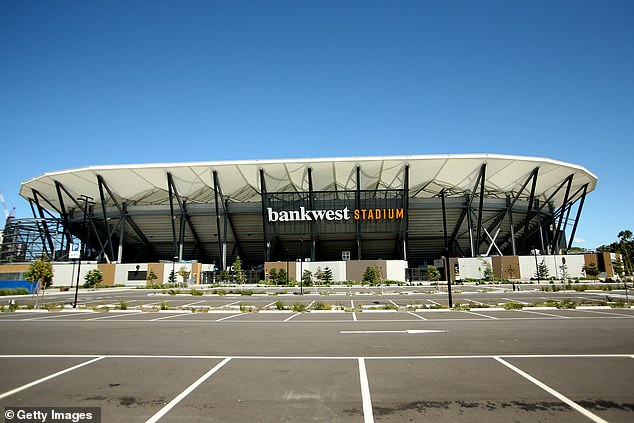 Scott Morrison is hoping to secure a nationwide vaccination rate of 80 per cent to avoid ongoing lockdowns. Pictured: Sydney’s Bankwest Stadium which will be transformed into a Covid vaccination hub

Lieutenant-General John Frewen, commander of the national vaccine rollout, said a new plan is being put in place to fast-track jabs for those aged under 40, who are now the ‘peak transmitters’ of the Indian Delta strain.

He said on Tuesday all Australians aged between 30 and 39 will be eligible for the vaccine from the end of August, one month ahead of schedule.

Those aged between 16 and 29 will be able to receive the shot from October.

But while Australia’s vaccine supply issue is on the cusp of being solved with millions of more Pfizer doses on the way, there may be another barrier which could see the ambitious target of 80 per cent fall short. 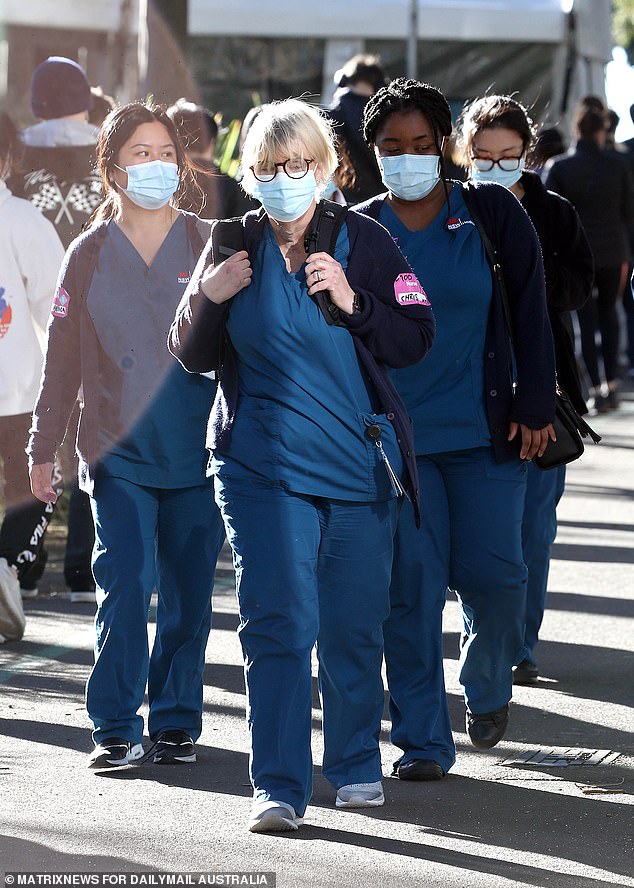 The Federal Government is preparing to send ‘flying squads’ of nurses into workplaces offering Pfizer and AstraZeneca jabs to employees. Pictured: Health workers are seen at the NSW Vaccination centre at Olympic Park in Sydney

Thousands of protesters last weekend stormed Sydney and Melbourne’s CBD rallying against lockdowns and vaccines as many clashed with police and chanted unfounded anti-science rhetoric claiming ‘Covid is a hoax’.

The marches were fuelled by a surge in online chatter – much of it calling for violence.

‘We are looking at the online environment very closely and where we see commentary cross the threshold that goes to the ­potential for a commitment to ­violence or violent acts, that’s where we’ll take action,’ he told The Australian.

A 49-year-old West Australian man was arrested on Monday over a fake video where police allege he impersonated Australia’s federal police commissioner and described a plot to overthrow the federal government.

It is further alleged he called on political leaders to be shot with a handgun. 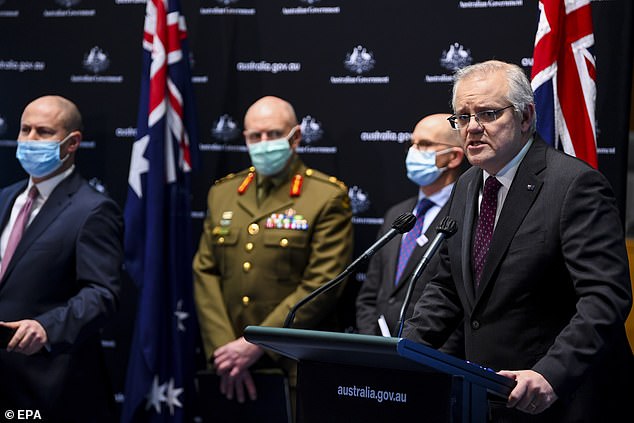 Under Mr Morrison’s (pictured at the podium) four-stage re-opening plan, a state or territory can move to remove the need for restrictions when the national vaccination rate hits 70 per cent and the rate in that state also hits 70 per cent 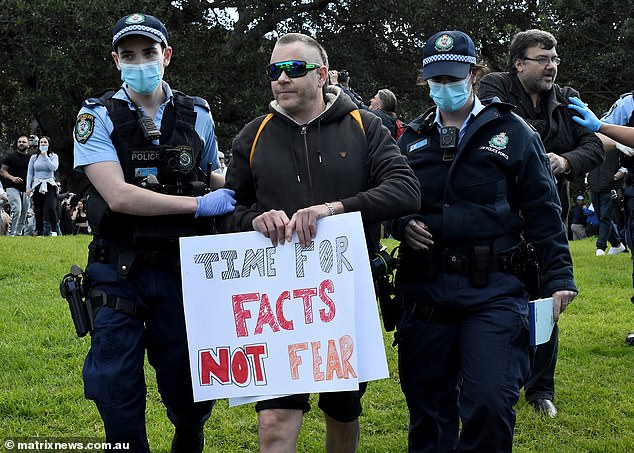 One of the social media platforms causing most concern for police is the encrypted messaging app Telegram, where anti-vaxxers are spouting wild theories and planning protests.

Controversial MP Craig Kelly recently moved to the platform after being kicked off Twitter and Facebook for spouting anti-vax rhetoric.

In just a few days his posts have been flooded with violence death threats related to coronavirus.

Under a picture Mr Kelly ­posted of Scott Morrison, one unhinged follower wrote: ‘The biggest danger to Australians is in that picture. Scumo needs to be hung for ­treason.’

‘Every police officer that participates, every health official that administers a jab … every journo, every celeb, every politician that didn’t say anything … everyone will be jailed or executed, no f**king around,’ another wrote

‘Threats of violence are obviously the threshold for police as to whether we feel that we’re to take action or not,’ Assistant Commissioner Lee said. 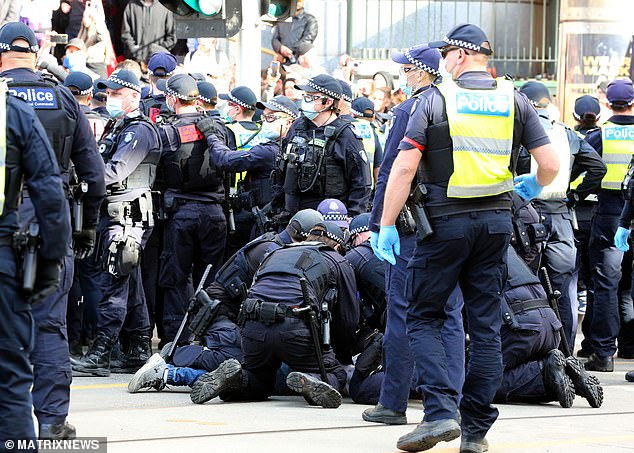 One of the social media platforms causing most concern for police is the encrypted messaging app Telegram, where anti-vaxxers are spouting wild theories and planning protests (pictured, police grapple with a protester in Sydney on July 24, when 3,000 flooded the city)

The NSW Council for Civil Liberties also says ‘vaccine passports’ to get into concerts, football stadiums and nightclubs, does not infringe on human rights.

‘It’s within the rights of employers to say to employees I need to keep everyone safe. The right to life, the right to be free of disease, is pretty fundamental,’ president Pauline Wright told The Australian.

‘And with vaccine passports at a nightclub, for example, you make a deal at the door. You’re saying if you come into my premises, I have to think of my staff.

‘We would oppose a blanket mandate across the population as that offends freedoms – people have religious views, for ­example – but looking at each ­instance (in different workplaces), it’s hard to see an incursion on liberties.’

HOW LIKELY ARE YOU TO GET COVID-19 AFTER BEING FULLY VACCINATED?

So-called ‘breakthrough’ COVID-19 cases occur when people contract the disease 14 days or more after receiving their second dose of the Pfizer-BioNTech or Moderna vaccine or the Johnson & Johnson one-shot jab.

Clinical trials have shown that Pfizer-BioNTech’s vaccine is 95% effective in preventing symptomatic disease and the Moderna vaccine is 94.5% effective.

Meanwhile, real-world data showed the Pfizer jab is 91% effective against all disease for at least six months and the Moderna vaccine is 90% effective.

In addition, Johnson & Johnson’s vaccine trials showed 72% efficacy in the U.S., meaning those who got the one-shot jab are 72% less likely to contract the disease.

When comparing fully vaccinated people who did and did not get sick, the risk is even lower.

The most recent Centers for Disease Control and Prevention (CDC) data show that 10,262 of at least 133 million Americans who have been fully vaccinated against COVID-19 later contracted the disease.

This translates to 0.00716% of people who have completed their vaccine series have gone on to test positive.

It also represents the true odds of getting COVID-19 after full vaccination: less than 0.01%.

What’s more, fully vaccinated people who test positive have mild illnesses, and are very unlikely to be hospitalized or die.

The CDC states that 99.5% of all deaths occur in unvaccinated people.

That means, if the figure applies to the 3,165 Americans who’ve died in July 2021 so far – as of July 13 – about 3,150 deaths would be among unvaccinated people and 15 deaths among fully vaccinated people.