Why you should always check your blind spot: driver’s dangerous lane change causes serious accident – but did other car contribute to crash?

A driver in Victoria has learnt a valuable lesson after forgetting to check the blind spot before changing lanes, triggering a major accident.

Footage of the collision was captured on the dash-cam of a trailing car at 6.40am on Wednesday in Rockbank, just beyond Melbourne’s western fringe.

The footage showed a Subaru Forester indicat for only 2 seconds while merging into the left lane, where it veered into the path of a Ford Falcon.

The Falcon attempts to dodge the SUV by moving off the road and onto the grass verge but had to pull back to avoid hitting a light pole, creating a collision with the Subaru.

The Subaru is then sent out of control, veering wildly to the right and hitting the roadside barrier, destroying the front left corner of the car and damaging the whole left side of the vehicle.

The collision sprayed debris across the Western Freeway before the 4WD rolled back out onto the highway dragging its front bumper.

Luckily, both drivers came away from the collision unscathed, but the same can’t be said for the vehicles. 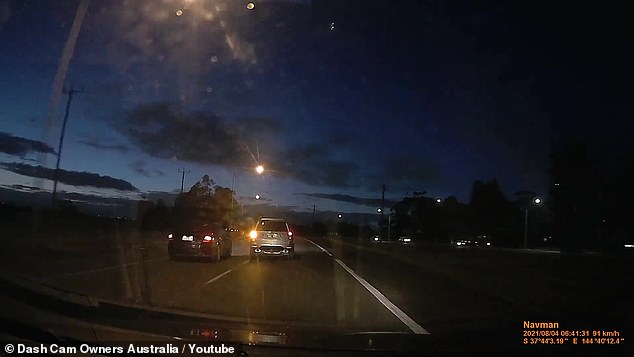 A collision has been captured by a dash-cam camera on the Western Freeway in Rockbank, Victoria showing a driver veering in the path of a Ford Falcon without checking their blind spot 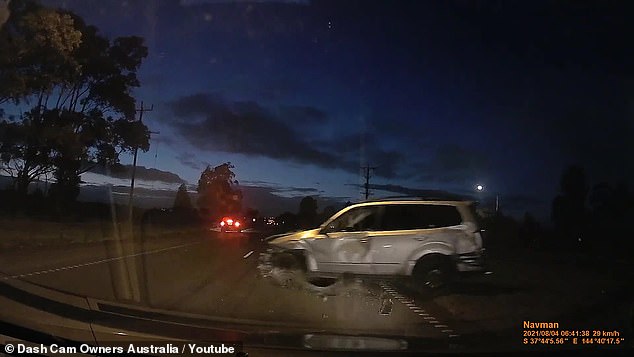 The Subaru Forester is smashed into, causing it to spin and crash into the traffic barrier, ripping its front bumper off and damaging the side doors of the car leaving debris across the highway

‘Rewatching it you can see the point where the sedan driver realises he might get pushed head-first into a light pole by the SUV and decides he’d rather hit the other car instead,’ one commenter wrote.

But, some commenters on the online video thought the driver of the Falcon contributed to the collision and could have avoided contact.

‘This is why you use the brake before the horn. Other car could have avoided this smash, is it just me or did they actually accelerate when the car merged?’