Rep. Alexandra Ocasio-Cortez’s brother went after ‘leftists ranters’ who called out his sister and accused her of being a hypocrite after her ‘TAX THE RICH’ dress appearance at the $35,000-a-head Met Gala.

On Monday night, the leftwing firebrand made headlines by wearing a custom white gown with the words ‘TAX THE RICH’ emblazoned across it, designed by Brother Vellies.

Gabriel Ocasio-Cortez, who works in real estate, went on a angry Instagram rant himself while defending his congresswoman sister’s bold fashion statement.

‘She went with no intention to rub elbows, which is why every other politician goes,

‘She wore a statement dress about the ultra-rich not paying their fair share right in front of their faces.

‘Would you prefer she try to wear the same dress outside McDonald’s in an attempt to solicit the same response? Genuinely curious,’ he said. 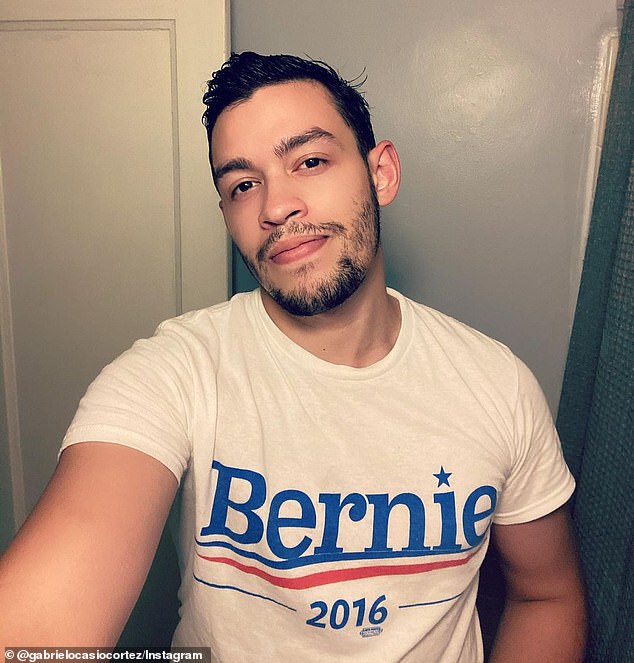 Rep. Alexandra Ocasio-Cortez’s brother defended his sister on a social media rant, calling out  ‘leftists ranters’ who accused her of being a hypocrite after her ‘TAX THE RICH’ dress. 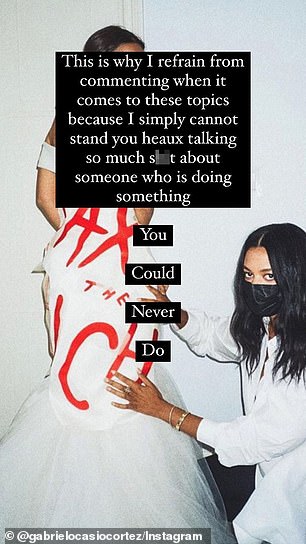 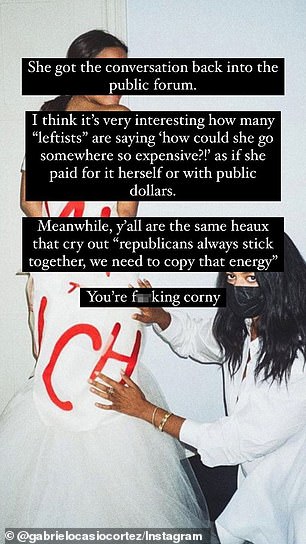 Gabriel Ocasio-Cortez went on a angry Instagram rant himself while defending his congresswoman sister’s bold fashion statement. Gabriel went on to call critics of AOC ‘f****** corny,’ and accused them of criticizing his sister without even knowing ‘who their congressperson is.’ 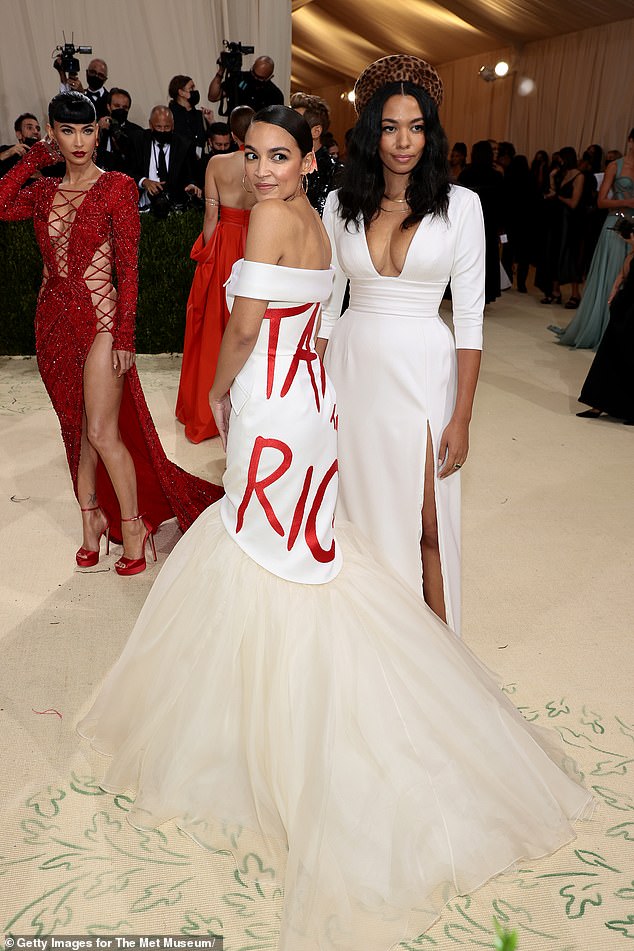 AOC poses in her ‘Tax The Rich’ dress while movie star Megan Fox waits behind her. AOC attended the event with designer Aurora James in what she claims was a political protest

AOC said she’d been invited to the event as an elected official. DailyMail.com can reveal the Met Museum comped her ticket and Bill de Blasio’s

Gabriel went on to call critics of AOC’s Met Gala appearance ‘f****** corny,’ and accused them of criticizing his sister without even knowing ‘who their congressperson is.’

‘I think it’s very interesting how many ‘leftists’ are saying ‘how could she go somewhere so expensive?!’ as if she paid for it herself or with public dollars.

‘Meanwhile, y’all are the same heaux that cry out ‘republicans always stick together, we need to copy that energy.’

‘Even if it’s not your cup of tea when it comes to political messaging, sitting in your unwashed sheets with your d*** in your hand commenting ‘healthcare plz’ is f****** lame.’

He then dared the ‘ranters’ to follow through with their social media activism and find a real-life platform to showcase it.

‘Why don’t you make a statement bigger than this so you can show us all ‘how it’s done’? I’m waiting,’ he concluded. 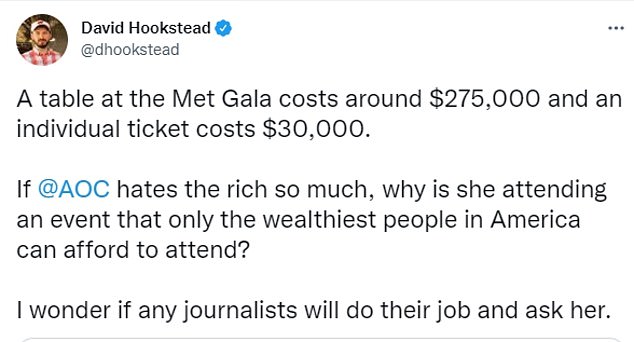 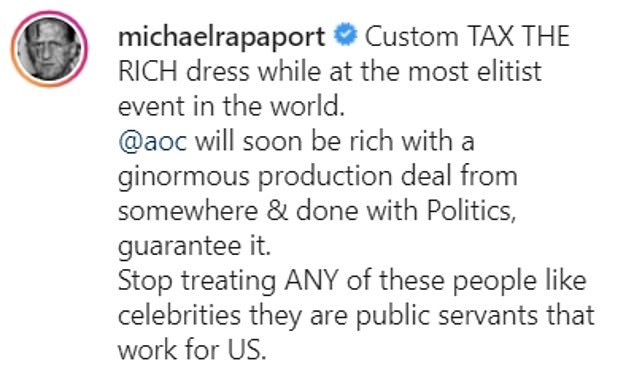 Backlash against AOC remained large on twitter, as users continued to bring up the irony in her message and the platform that she used to deliver it.

Andray Domise, a writer and partner in black news network Rezistans Nwa, also pointed out that the gala was taking place just yards from where the NYPD were arresting ‘defund the police’ protesters – a cause that AOC has previously supported.

‘Police were creasing people’s heads outside while you and your friends were nibbling watermelon tarts with smoked yuzu soy on panipuri crackers,’ he said

Greg Price, a writer for the Daily Caller, added: ‘AOC grew up in a wealthy suburb, went to one of the most expensive colleges in America, makes a six figure salary, drives a Tesla, lives above a whole foods, and is currently at an event that costs more to attend than America’s average personal income.’

Actor and comedian Michael Rappaport also weighed in. He shared a picture of AOC in a dress fitting session and captioned it: ‘Custom TAX THE RICH dress while at the most elitist event in the world.

‘Will soon be rich with a ginormous production deal from somewhere & done with Politics, guarantee it.

‘Stop treating ANY of these people like celebrities they are public servants that work for US.’ 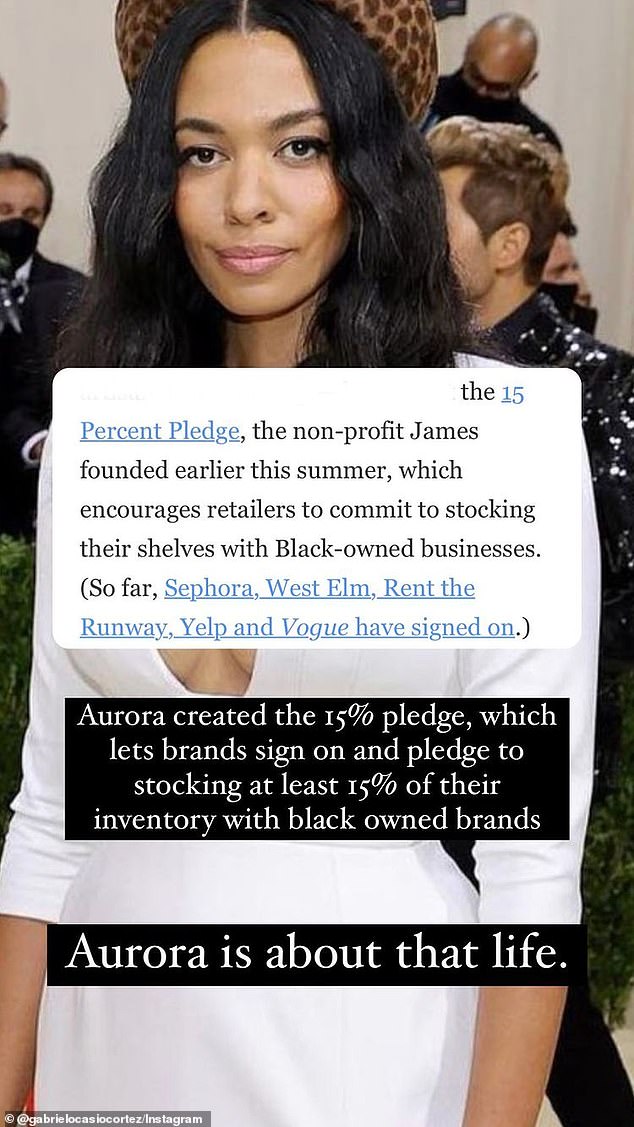 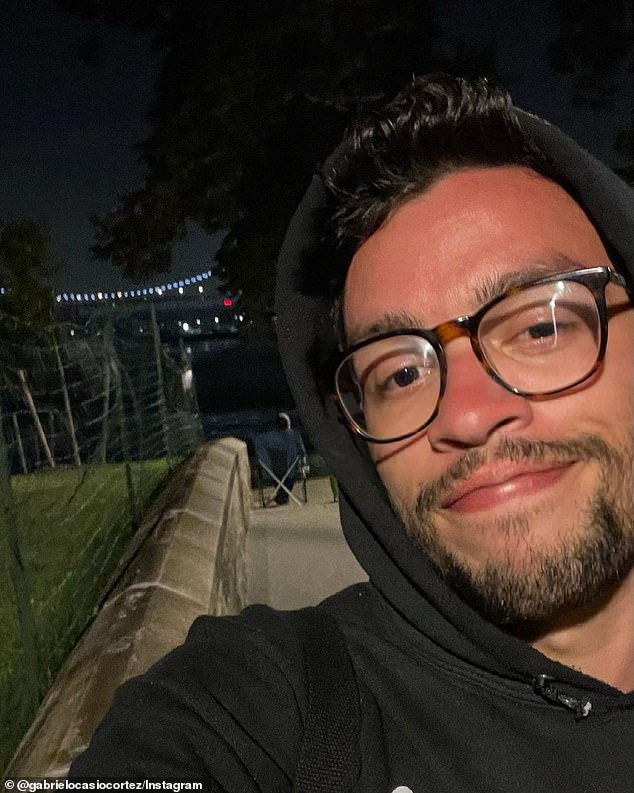 Gabriel dared the ‘leftist ranters’ to follow through with their social media activism and find a real-life platform to showcase it. ‘Why don’t you make a statement bigger than this so you can show us all ‘how it’s done’? I’m waiting,’ he said on Instagram

AOC also addressed ‘haters’ who criticized her Met gala bold fashion statement and branded her a hypocrite. She said that she was invited as one of New York’s elected officials in charge of ‘overseeing and supporting the city’s cultural institutions for the public.’

‘By ‘the rich’, do you mean the kind of people who could afford the stuff sold on the website of the designer who designed your dress & invited you to the Met Gala?,’ tweeted an user.

Another Twitter user jumped to AOC’s defense, stating that her dress had actually initiated a conversation on the issue.

‘She got you attention in the donated designer dress, and invitation. I’d say she’s quite brilliant,’ they wrote.

The Democrat firebrand attended Tuesday night’s star-studded event as guests of the museum, according to Met Museum spokeswoman Nancy Chilton.

Ocasio-Cortez’s boyfriend, NYC Mayor Bill de Blasio, his wife and son also took free tickets worth total of $175K, that could have been sold to support the museum.

The $35,000 ticket proceeds go to the Met’s Costume Institute, one of the only departments that doesn’t receive government funding, to supports its exhibitions, acquisitions, and capital improvements.

AOC did not buy her own ticket but mystery remains over who paid for the politicians, after it was revealed that event organizer Conde Nast did not cover the cost of the tickets. 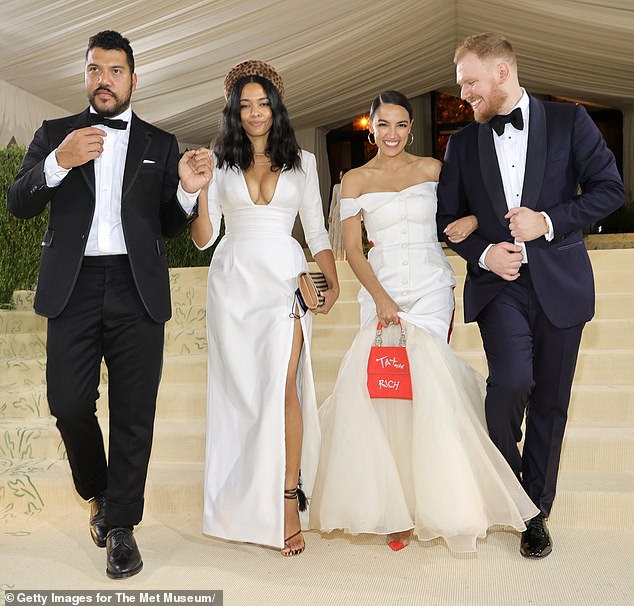 AOC with her boyfriend Riley Roberts (far right), her dress designer Aurora James and Benjamin Bronfman (far left), James’ partner who is the heir to Seagrams Company Ltd. The group was pictured leaving at midnight. AOC claimed she’d been ‘invited’ as an elected official. DailyMail.com can reveal she was a guest of the Met Museum 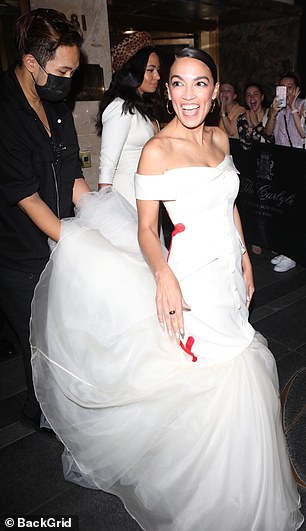 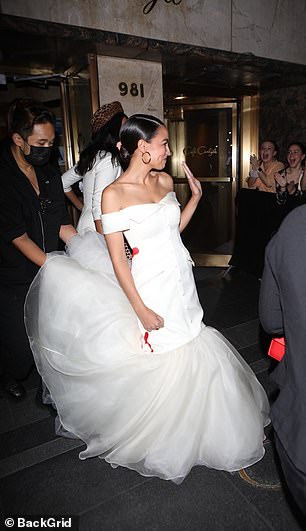 Before the gala, AOC got ready at The Carlyle hotel on the Upper East Side, where rooms cost upwards of $1,000-a-night. She was escorted to a chauffer-driven car, with someone carrying the train of her dress, and she waved to screaming fans as she left the hotel