‘It was the most pathetic meal I’d ever seen!’ Patient is served up plate of just BAKED BEANS with carton of apple juice as she battled pneumonia in hospital

Have you ever had a pathetic hospital meal?

A hospital patient has complained after being served a plate of beans with apple juice as she tried to build up her strength after battling pneumonia.

The woman, 42, spent seven days in the Royal Stoke University Hospital earlier this month after being struck down with pneumonia.

At one point she was nil-by-mouth for 16 hours as she awaited and then recovered from a procedure.

But when the woman – who has refused to be named – was allowed to eat again, she says she was dismayed by her first meal.

She said she got a plate with around 100 baked beans on it and a small carton of apple juice ‘plonked’ down on her table.

Following a complaint, staff fetched a jacket potato and a packet of butter – only for her to discover the wrapper was empty.

She insists her medical care at the Royal Stoke was exemplary and had nothing but praise for the hard-working and dedicated staff.

But she says her paltry meal is just one example of how the under-pressure NHS is struggling to cope during the latest covid surge gripping North Staffordshire. 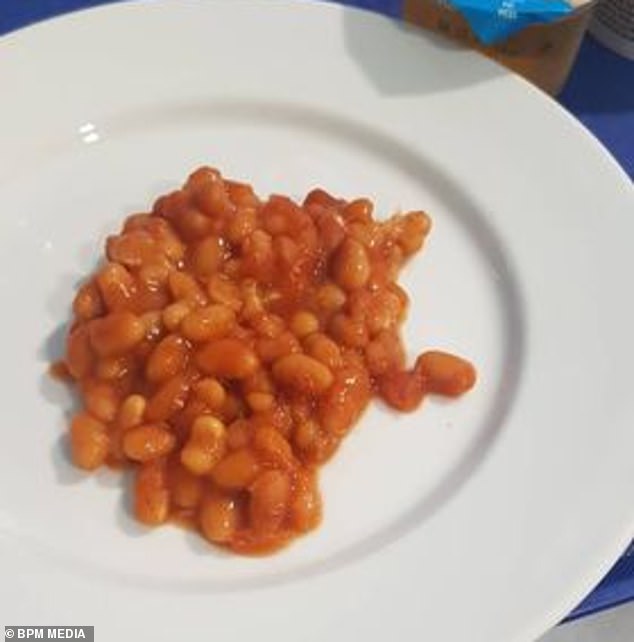 Royal Stoke has now raised the issue with its catering team.

Sharing a photo of her lunch with StokeonTrentLive, she said: ‘It was the third time I’d been in hospital with my pneumonia. I was taken there by ambulance as I was struggling to breathe.

‘I was put on ward 222 and I was nil by mouth from 5pm. Usually someone comes round and asks you what you want for dinner the following day but I must have been asleep.

‘They just came and plonked a plate of beans in front of me. I was in a state of shock. I said ‘is someone having a laugh?’. You couldn’t make it up.

‘I pressed my buzzer to complain and made it pretty clear to them how hungry I was in the politest possible way. 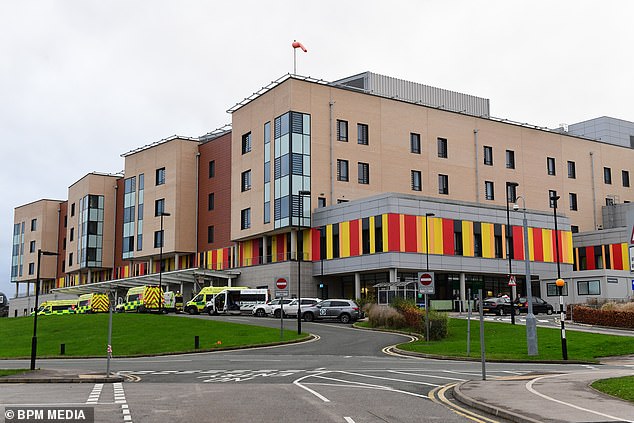 ‘They offered me a salad but by that point I just wanted carbs. They then turned up with this jacket potato and an empty packet of butter. God knows where they’d found this potato. I was that blimmin’ hungry by then, I just ate it anyway.

‘It tasted pretty awful but I was grateful for it. I don’t know how you’re supposed to get better if that’s what they’re feeding you? Hospital food is cruddy at the best of times but this was the most pathetic meal I’d ever seen.

‘I can’t imagine anyone just ordering a small plate of beans. Who does that?

‘I’d been in there for two days already so I don’t know how they got muddled. It wasn’t like I’d changed beds.’

The patient is now back at home in Chesterton after being discharged on September 16.

She added: ‘I feel so sorry for the staff. They are just rushed off their feet.

‘The nurses were really lovely, I couldn’t fault the care, but they don’t have enough bodies to do the work.

‘The NHS is at breaking point. They even had to open another covid ward when I was there.

‘Thankfully I’m on the mend now but my baked beans meal is just one example of how over-stretched they are.’

Lorraine Whitehead, UHNM’s director of estates, facilities and PFI, said: ‘We take any complaint or concerns raised by patients or their families seriously; this has been raised with our catering providers to ensure that the food served is delivered to the highest standards possible.’

Have you ever had a pathetic hospital meal? E-mail: [email protected]