Boris Johnson is taking a sunshine break thousands of miles from the problems engulfing Britain at a £25,000-a-week luxury hideaway – which is owned by one of his ministers.

Spanish media reported that the Prime Minister and his young family are staying at Tory peer Zac Goldsmith’s home in the hills above the Costa del Sol.

Plenty of security officials and police activity have been spotted around the property over the last day, after Boris’ trip was revealed by the Mail and other newspapers yesterday.

Mr Johnson’s foreign holiday – his first since before the pandemic – is likely to be seized on by critics, who will point out that he has left the country in the middle of a fuel crisis and with families facing a predicted ‘winter of discontent’, surging energy prices and stock shortages.

But it is hoped some time in the luxurious Spanish hillside hideaway will give him time to recharge.

And today, residents of the picturesque village of Benahavis said the Prime Minister’s visit had become the talk among locals.

‘Yes for sure your prime minister Boris Johnson is staying up at the house,’ farmer Pedro Benares told MailOnline. ‘I don’t know when he arrived but everyone in the village is talking about it.

‘It is a very big house and very private but they have to drive in and out.’ 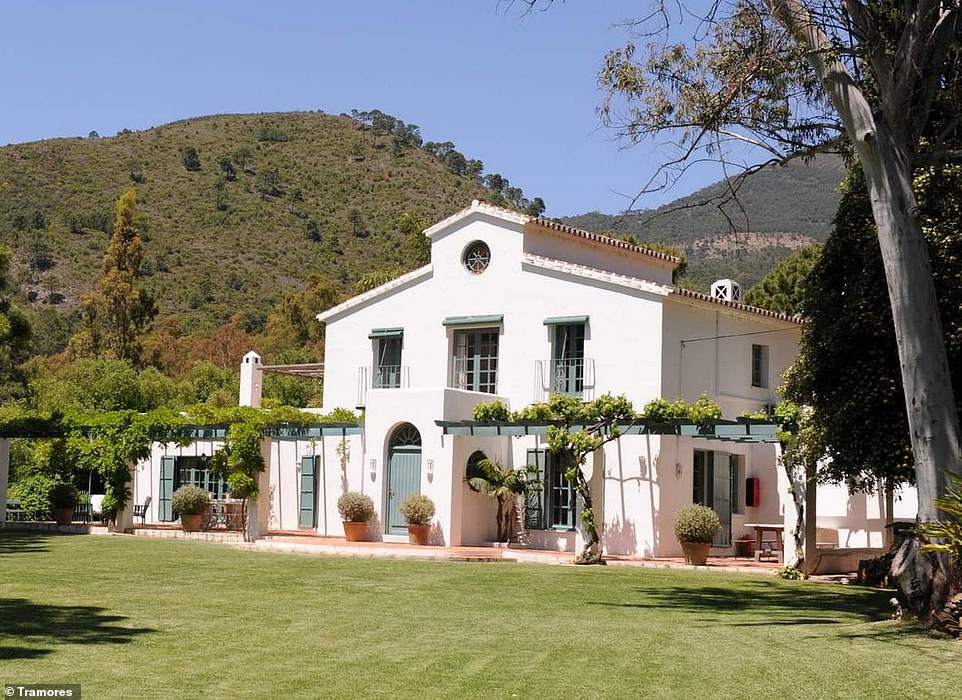 Boris Johnson and his pregnant wife Carrie are reported to be taking a foreign break at £25,000-a-week Marbella hideaway owned by the Prime Minister’s wife’s close friend and Tory peer Zac Goldsmith 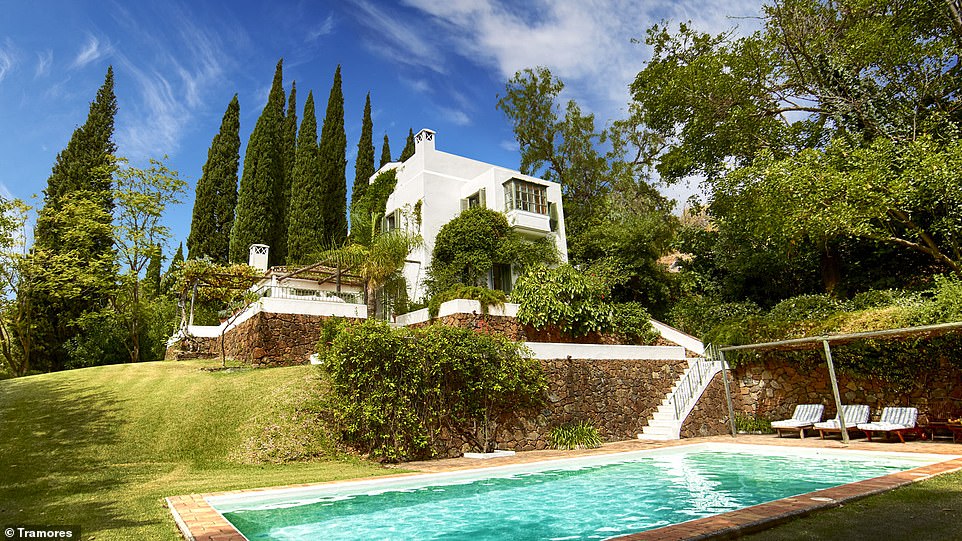 Plenty of security officials and police activity have been spotted around the property over the last day, after Boris’ trip was revealed yesterday 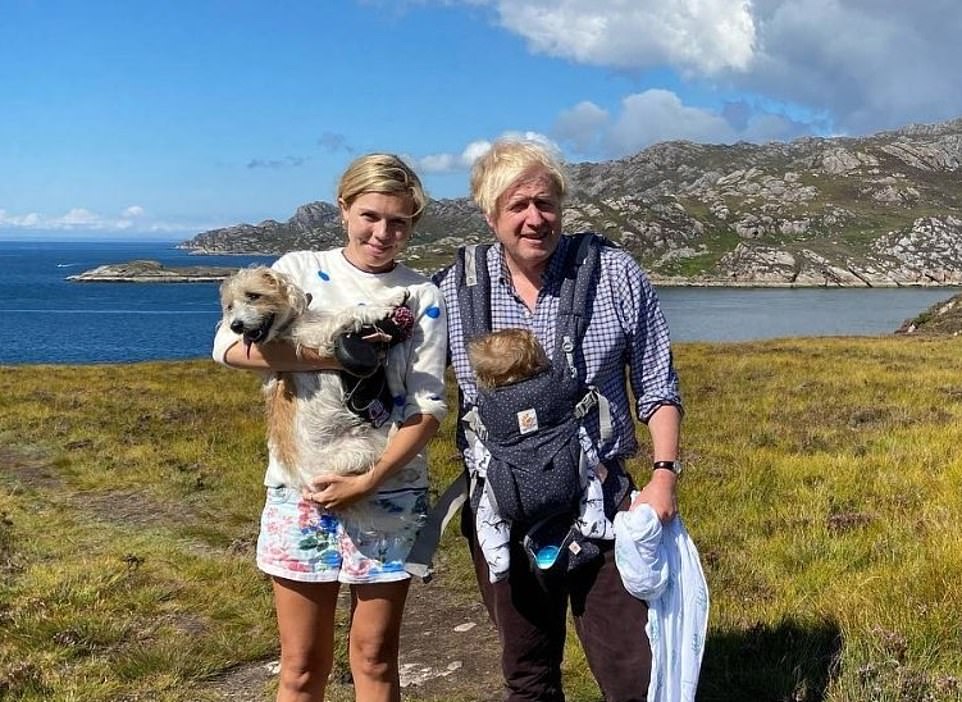 Mr Johnson’s holiday there is likely to be seized on by critics, who will point out that he has left the country in the middle of a fuel crisis and with families facing a predicted ‘winter of discontent’, surging energy prices and stock shortages. Pictured: Boris and Carrie last took a family break with Wilfred in Scotland last year 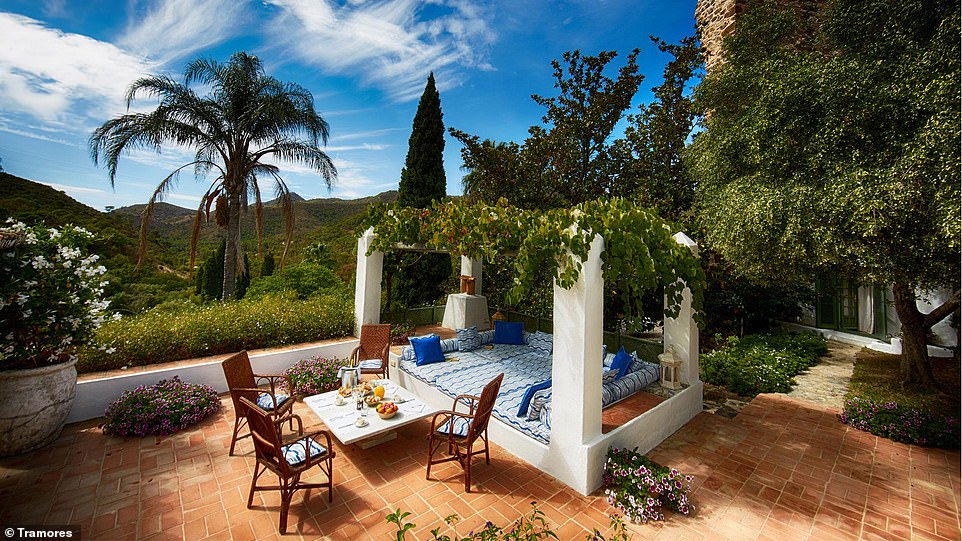 But it is hoped some time in the luxurious hillside hideaway will give him time to recharge. The main house is set on three levels and sleeps 13. It includes a two-bedroom apartment with private access 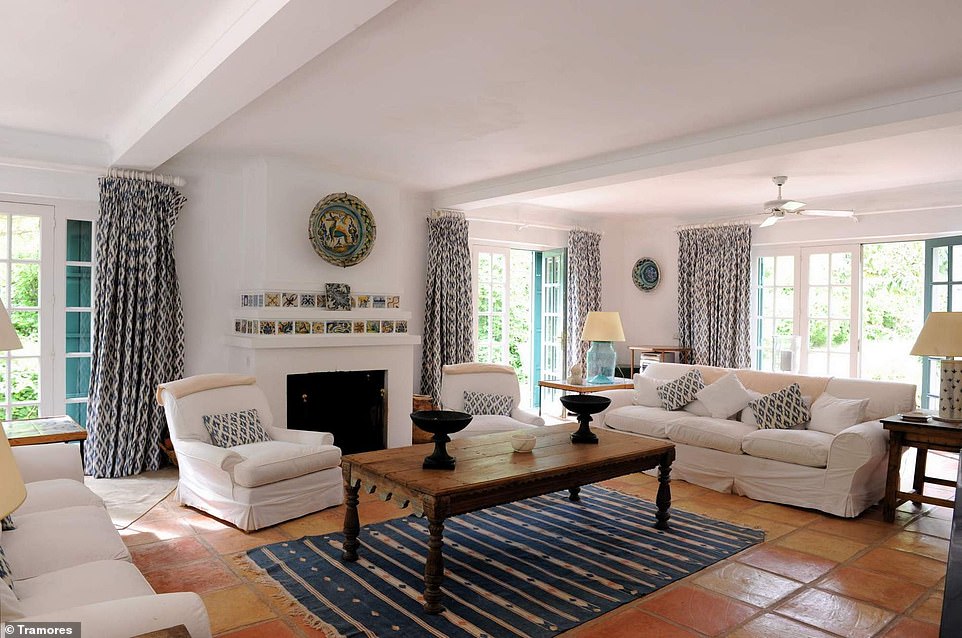 The estate, known as Torre Tramores, is a short drive from the picturesque village of Benahavis, and has its own helipad to make sure VIP holidaymakers can arrive and leave without being seen.

The main house is set over three levels and can sleep up to 13 people. It also includes a two-bedroom apartment with private access.

There is also a slightly smaller villa that sleeps up to 10 people and includes five en-suite bedrooms which can be rented separately.

Princess Diana is rumoured to have stayed at the exclusive estate, set in over 600 acres of woodland, after her divorce from Prince Charles.

And former cricketer-turned-Pakistani-PM Imran Khan was snapped making love by one of its two swimming pools to his then-wife Jemima Goldsmith, Zac’s sister, on their honeymoon.

Mr Johnson has not been pictured at the property, and it is not known if he has left the estate since arriving on Friday with pregnant wife Carrie, 33, and their one-year-old son Wilfred.

A Civil Guard patrol car was spotted driving up to an entrance gate at lunchtime today and greeting undercover police parked near the property as they left.

Four burly men in another unmarked car, thought to be police officers normally based in Madrid, were also seen circling the estate. 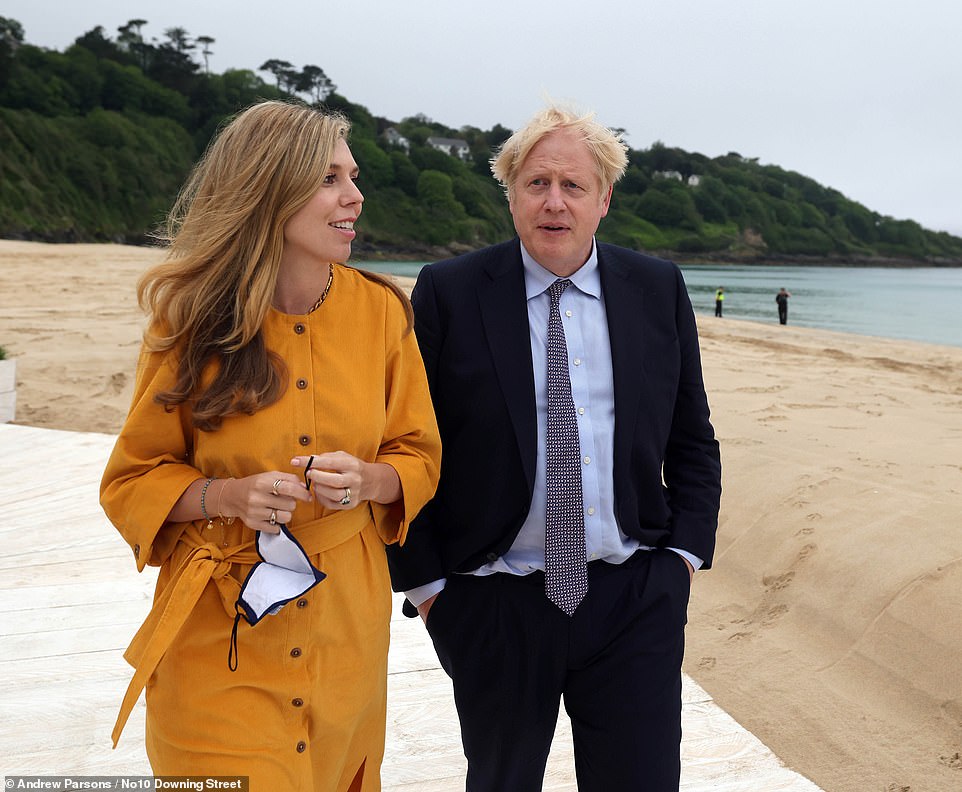 The Prime Minister has flown to Marbella with his pregnant wife Carrie and their 17-month-old son Wilf, who is enjoying his first foreign break 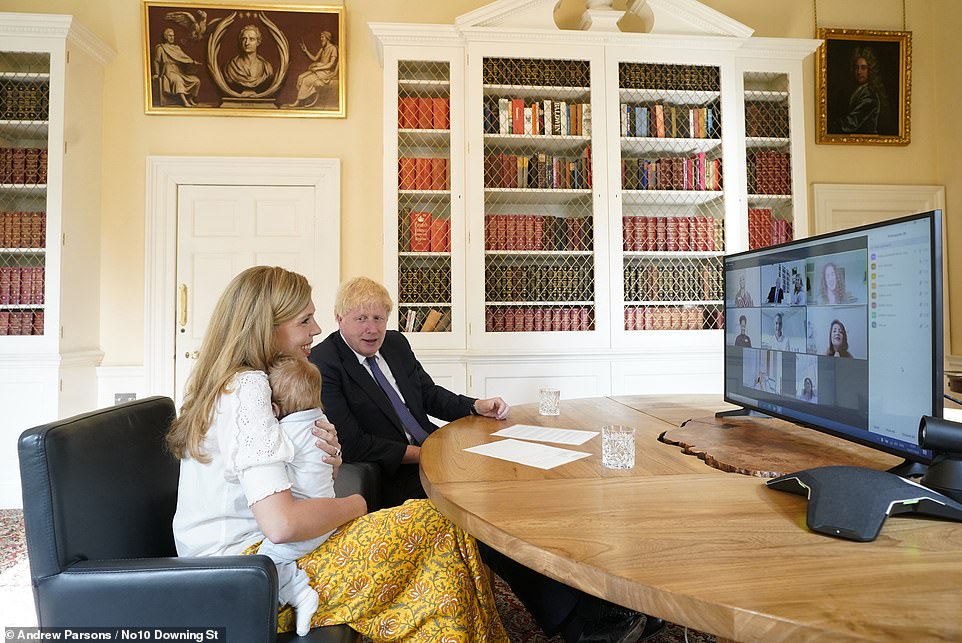 The Prime Minister is travelling with his pregnant wife Carrie and their 17-month-old son Wilf, who is enjoying his first foreign break 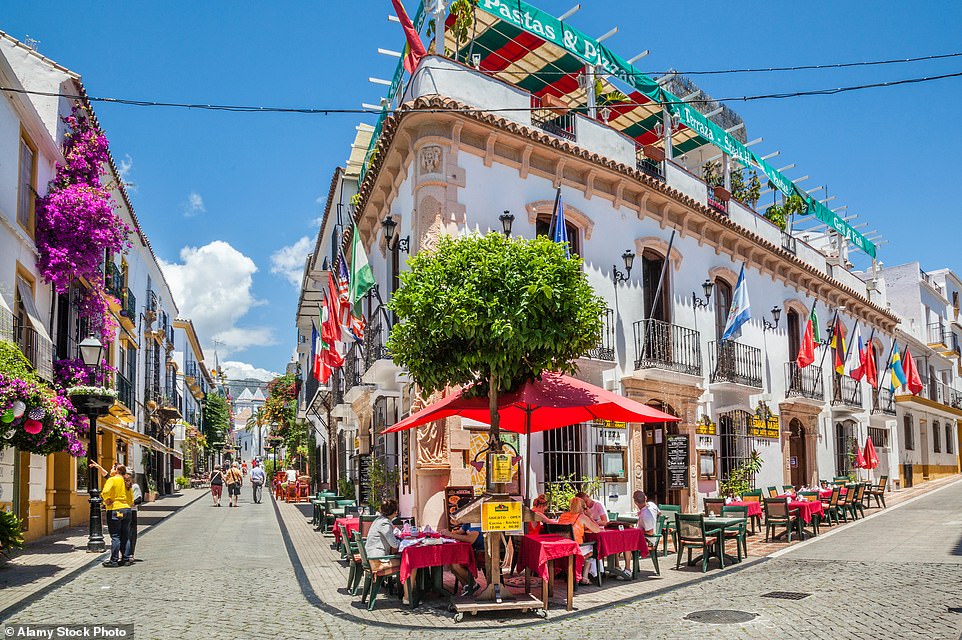 The Costa del Sol is popular with prime ministers: Tony Blair and his wife Cherie stayed at a friend’s house in the village of Benahavis, which was visited by Michelle Obama in 2010

News of Boris’ escape to the Spanish sun emerged late on Saturday.

It is his first foreign holiday since the start of the coronavirus pandemic and comes as the UK is in the grips of a fuel crisis with families facing a predicted ‘winter of discontent’ with surging energy prices and food shortages.

His last break was a radically different summer staycation in Scotland which he had to cut short because of security concerns.

He picked a cottage in remote Applecross on the north-west coast in August last year when Carrie was still his fiancée.

A Cabinet minister has defended Boris Johnson for going on holiday as the Government battles to stem a cost of living crisis and the fallout from spiralling gas prices.

Business Secretary Kwasi Kwarteng insisted it was ‘reasonable’ for the Prime Minister to take a break, after he  flew to Marbella to holiday in a private villa on the Costa del Sol.

Mr Kwarteng said he remains in ‘regular WhatsApp contact’ with the Prime Minister, who he noted has recently lost his mother.

Downing Street did not deny reports Mr Johnson had travelled to Spain, but declined to say whether the Prime Minister was instead working at No 10 or in Chequers, as is commonplace.

The Business Secretary told Times Radio: ‘I believe he has gone away. I’m not sure where he’s gone.

‘But what I would say is I am in regular contact with him. He’s also had a year-and-a-half in which he’s almost lost his life to Covid, his mother passed away very sadly two or three weeks ago and he may have decided to take a short break.

‘I think that’s something reasonable.

‘I’m in regular WhatsApp contact with him, I spoke to him only a few days ago. I’m not sure when he’s supposed to have left the country.’

Dog Dilyn joined them for the break, which ended amid accusations the PM had pitched a tent in a farmer’s field without permission after they reportedly chose to camp for a few nights of their stay.

Temperatures in Marbella, the famous Costa Del Sol resort a 30-minute drive from the current getaway, were up in the mid-seventies at midday today.

A five-minute drive away in the village of Benahavis, British expats and holidaymakers were enjoying al fresco lunches under a cloudless blue sky.

It was not clear today when Boris and his family will stay in the area until, although they are expected to fly back to Britain on Wednesday.

Torre de Tramores boasts on its website: ‘What sets this exclusive and private getaway apart is the quality and authenticity of its antiques and furnishings, along with the natural splendour and historical atmosphere of its environment.

‘With its understated elegance and rustic charm, the Tramores estate offers the perfect retreat to unwind, meditate and be inspired, or entertain family and friends.’

Guests are invited to ‘find some old-fashioned romance amid rambling vines and sun-kissed stone walls’ in an official estate publicity brochure available online.

The owners describe it as the ‘most enchanting, picturesque and serene private estate in southern Spain.’

Tennis fan Mr Johnson, who went on a health kick after coronavirus nearly killed him last year, could also take advantage of the estate’s court.

Lady Annabel Goldsmith, the wife of the late billionaire financier Sir James Goldsmith, recalled its purchase in her autobiography An Unconventional Life.

‘That day, as we stood on the terrace, looking out to the mountains at the astonishing view, with no other sign of human habitation, and nature at its most simple and dramatic, Jimmy fell silent,’ she wrote.

MailOnline approached Downing Street but a spokesperson declined to comment.