Meanwhile, Senator Dianne Feinstein of California, played by Cecily Strong, groused about her 2,000 friends, and whether she was more popular than singer Drake.

Texas Senator Ted Cruz, played by Aidy Bryant, lashed out at a page branding him a virgin.

And South Carolina Sen Lindsey Graham, played by James Johnson Austin, moaned that copying Instagram’s ‘gymspiration’ posts of men working out were failing to give him the body he desires.

In Saturday night’s cold open, Gardner introduced herself as Haugen, the former Facebook employee who came forward last week to reveal that Facebook executives knew about the harm it was causing to young adults and democracies, but chose not to act.

She testified before Congress on Tuesday, demanding that American officials regulate the social media giant.

But in SNL’s spoof of the hearing, instead of discussing the scandals at Facebook and the harm it causes, Haugen has to field questions from Congressmembers about how social media works. 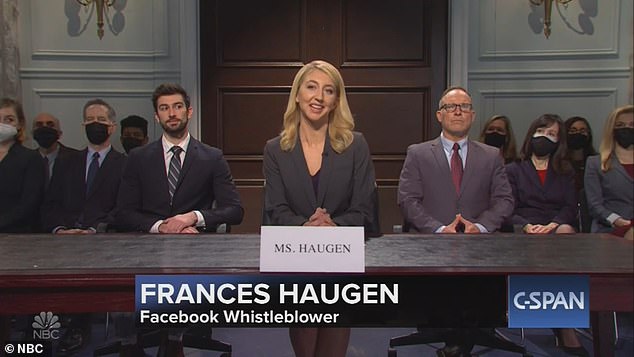 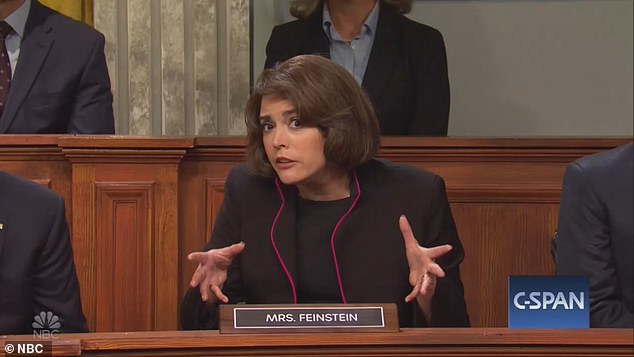 The first senator to ask questions in the sketch is Senator Diane Feinstein, played by Cecily Strong, who asks if 2,000 friends on Facebook is a lot

It starts with a title screen from C-SPAN, as a voiceover says: ‘You’re watching C-SPAN on a Saturday night, wow.

‘We now return to coverage of the Facebook hearings in Congress,’ the voiceover continues before dissolving the title screen to reveal Mikey Day, as Sen. Richard Blumenthal leading the Congressional hearings.

He says:  ‘Once again, I would like to thank the Facebook whistleblower for coming forward,’ to which Gardner’s Haugen replies, ‘Thank you. It’s nice to be in an office with no skateboards.’

Day, as Blumenthal, then continues the hearing, saying: ‘Now my colleagues are eager to ask you questions about the inner workings of Facebook and Instagram.

‘The chair recognizes Senator Feinstein of California,’ he says, as the camera moves to Cecily Strong playing Diane Feinstein.

‘Ms. Haugen, I applaud your testimony here today,’ she starts off. ‘What Facebook has done is disgraceful and you better believe Congress will be taking action right after we pass the infrastructure bill, raise the debt ceiling, prosecute those responsible for the January 6th insurrection and stop Trump from using executive privilege, even though he’s no longer president.

‘Well, as a former Facebook engineer, I’m here today because I have seen firsthand how Facebook products harm children, stoke division and weaken our democracy,’ Haugen says, to which Feinstein replies: ‘And I appreciate that. My question is, I have 2,000 friends on Facebook. Is that good?’

‘Oh, my God. Well, no wonder he never answered my poke,’ Feinstein says in response.

At that point Blumenthal, played by Day, turns the podium over to Senator Neely Kennedy of Louisiana, played by Kyle Mooney. 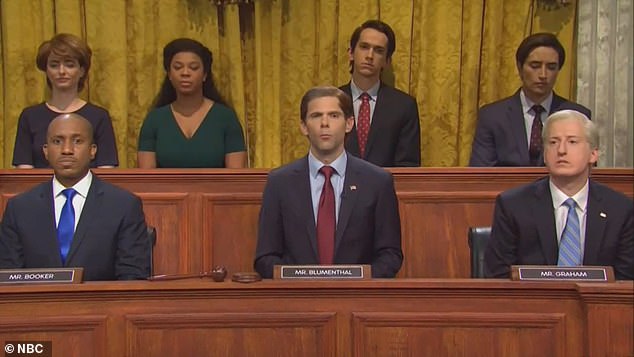 In the sketch, Senator Richard Blumenthal, played by Mikey Day, leads the discussion

‘Ms. Haugen, you’ve told us a lot of disturbing information about this so-called algorithm,’ he says. ‘I just want to clear up a few points. Where is it?’

‘Uh no,’ she says, ‘but there are algorithms in all our phones and computers.’

‘Not mine, I got a Jitterbug flip phone,’ Mooney, as Kennedy, says. ‘[It] only lets me call my son or the hospital.

‘Now exactly, how big is this algorithm?’ he asks. ‘Stop me when I get there,’ he says as he slowly moves his hands further apart.

After a moment, Haugen asks him to ‘please stop,’ to which Kennedy says ‘Wooey, that’s pretty big. Scary stuff. No further questions.’

The questioning then again turns to Sen. Ted Cruz, played by Aidy Bryant.

‘I was particularly drawn to your testimony about bullying online,’ she says, as Cruz. ‘How some teenagers – and adult men – are bullied almost constantly.

‘Yeah, so I’m wondering how do you turn off that feature on Facebook where everyone comments on all your posts and says “you’re bad” and they “hate you?”‘ Cruz asks.

‘Well there’s an option to turn off comments,’ she replies.

‘OK excellent,’ Bryant’s Cruz says, as he appears to take notes on a giant legal pad. ‘And I’m also concerned about the toxic extremist groups you mentioned.

‘I’ve seen groups with hateful name like “Ted Cruz sucks” or “Ted Cruz is the real zodiac killer” or “How could Ted Cruz have kids when he a virgin?”

‘Shouldn’t we flag those as misinformation?’ he asks. 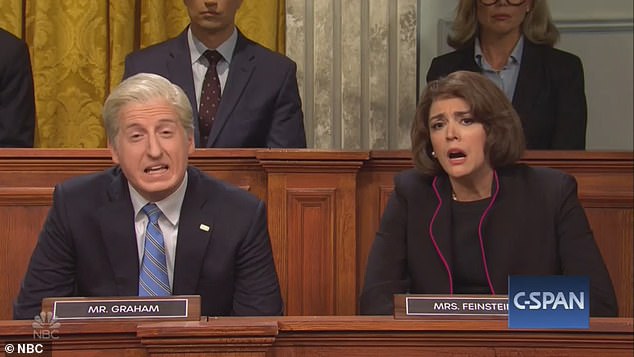 It is then Senator Lindsey Graham’s turn to ask questions in the sketch.

‘Thank you, Ms. Haugen,’ he says. ‘I believe that Instagram is toxic to the body image of impressionable young Americans, specifically me.

‘I see all these beefy guys on my discover page and I’m lifting and sweating, and nothing’s popping. No biceps, no triceps, no delts or nothing.

‘And I’m trying to get swole for Comic Con,’ Graham, played by newcomer James Austin Johnson says, referring to a slang term for muscular.

‘Okay, I’m sorry, is there a question?’ Haugen interrupts.

‘I’m just saying these young girls are trying to get a face that don’t even exist.

‘They want the fox eyes, the high cheek, the Emily Ratajkowski brow,’ he says, referring to an American supermodel.

Booker, played by Chris Redd then says he was ‘particularly disturbed by your testimony about how Facebook chooses to profit over the well-being of our children.

‘Rosario and I were discussing this very issue just the other day, Rosario Dawson,’ he continues.

‘Yeah, she and I are dating,’ Booker says. 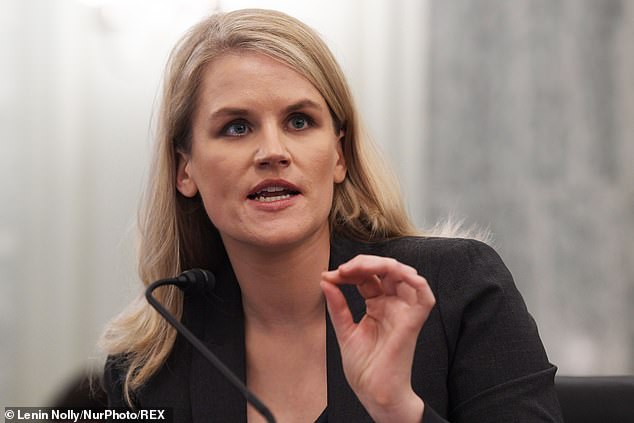 ‘So my question is: Does that make sense, right?

‘Like, when I stand next to her in a photo, that looks regular?’

‘I don’t feel comfortable answering that,’ Haugen says, at which point Graham interrupts and says he has ‘another question that’s burning a hole in my back pocket.

‘When you open an incognito window on Google, does that prevent God from seeing what you are doing?’ he then asks Haugen, to which she replies: ‘That sounds like something you have to ask the Bible.

‘And I will ask the Bible, thank you.’

During Kennedy’s follow-up he also asks how a question of people dressed up as the characters from Space Jam 2 wound up in his News Feed, to which Cruz asks: ‘Is that pornographic?’

‘Not yet but [it] feels like it’s heading there,’ Kennedy replies, as Feinstein says she had one of those photos show up in her feed as well as she displays a cover of one of the Animorphs books in which a girl turns into a mouse, and asks ‘What is this? Is Facebook pressuring teens to do this? To slowly morph into mice? Is this the Stuart little challenge?’

‘Oh, my god, that looks like something I found on the dark web,’ Graham responds, which ‘reminds’ Cruz to ask: ‘Is the dark web the same as Black Twitter?’

‘What about Squid Game? What is that,’ he asks.

‘Oh, America is in a lot of debt right now. Should we do a Squid Game,’ Feinstein chimes in, as Cruz says he was ‘put in a Squid Game recently’ when someone photoshopped his face over Squidward from Spongebob with the caption: ‘When Texas is freezing and you in Mexico.’

‘I got to ask about this one, too,’ Kennedy says, as he displays a picture of Mike Wazowski from Monsters Inc. appearing high with the caption: ‘When the edible kicks in and you the substitute.

‘Is that what the kids are calling a memay,’ Cruz asks, mispronouncing the word ‘meme,’ as others show memes that popped up on their Facebooks.

‘Let’s adjourn for lunch,’ Blumenthal decides. ‘But first,  I’m told we have a video response coming in from the founder of a very important social media site.’

The screen then cuts to Alex Moffat as Facebook founder Mark Zuckerberg, to which Blumenthal says: ‘No, no no, we don’t need any more from that guy,’ and turns it over to the ‘OG social media king,’ Tom from MySpace, played by Pete Davidson.

‘Remember me?’ he asks. ‘I was harmless.

‘I’m not doing any of that weird algorithm stuff. We barely maintain the website.

‘So come on by – check out your friend’s band from 20 years ago, and let’s make America top eight again.’ 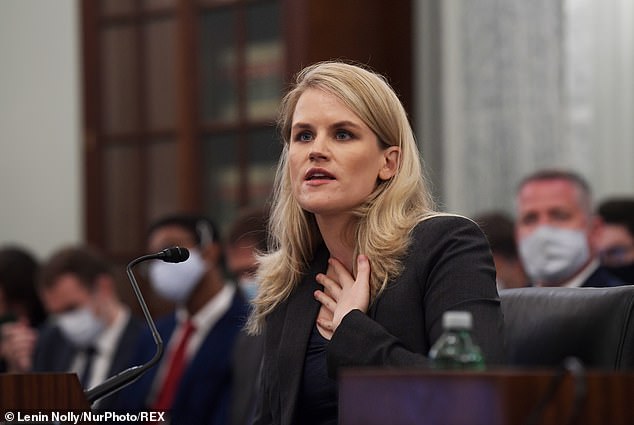 She claimed the company knows about the negative effects it has on children, and executives know how to make it safer but will not do so because they put profit ahead of people

In real life, Frances Haugen testified before Congress about the need to regulate the social media site on Tuesday, saying she decided to speak out because she believes that Facebook’s products ‘harm children, stoke division and weaken our democracy.

‘I joined Facebook because I think Facebook has the potential to bring out the best in us, but I’m here today because I believe Facebook’s products harm children, stoke division and weaken our democracy.’

She claimed the company knows about the negative effects it has on children and executives know how to make Facebook and Instagram safer, but won’t do so ‘because they have put their astronomical profits before people.’

‘The documents I have provided to Congress prove that Facebook has repeatedly misled the public about what it’s own research reveals about the safety of children, the efficacy of artificial intelligence systems and its role in spreading divisive and extreme messages.

‘I came forward because I believe that every human being deserves the dignity of truth,’ she continued, noting: ‘These problems are solvable.

‘Facebook can change, but is clearly not going to do so on its own.

‘My fear is that without action, [the] divisive and extremist behaviors we are  seeing now are just the beginning.

‘Congress can change the rules that Facebook plays by and stop the many harms it is causing,’ she said, telling lawmakers: ‘They won’t solve this crisis without your help.’