An anti-vaxxer was attacked by an outraged woman after he dressed like a Nazi concentration camp victim during a bizarre protest.

Shocked witnesses filmed the man standing on the corner of Flinders Street and Swanson Street in the Melbourne CBD about 1.30pm on Saturday holding a sign comparing Covid vaccine mandates to the holocaust.

‘History repeats,’ the man’s sign read, as he paced back and forth chanting propaganda.

The man was wearing a blue-striped pyjama set, which resembled the uniforms worn by millions of Jews in concentration camps across Europe during World War II.

Two women approached the man to tell him he was an ‘absolute disgrace’ for comparing himself to Holocaust survivors.

A group of young people then berated him for drawing comparisons between his cause and the extermination of millions.

‘I spoke to the witness who filmed this, a Jewish woman in her 50s, who has Holocaust survivors in her family,’ Dvir Abramovich, chairman of Jewish lobby group the Anti-Defamation Commission,  said.

‘She and her friend approached the man and told him he is an ‘absolute disgrace’.’

Mr Abramovich said witnesses claimed Victoria Police watched on as the fracas took place, until matters escalated when a woman in her 40s attacked the man.

‘Police then intervened to remove the [woman in her 40s],’ he said.

‘The Jewish woman and her friend questioned why the police were detaining the woman and not the man, and they were told that he had right to freedom of speech.’

Eventually, a police supervisor made the call to order the individual to move on, which he did.

Victoria Police told Daily Mail Australia they could not ascertain which officers attended the scene, and therefore could not comment on the matter.

Mr Abramovich later issued a statement calling for protesters to stop using ‘ugly tactics’ to promote their cause.

‘No, Victoria is not becoming Nazi Germany and those opposing the vaccination mandate and proposed pandemic laws must stop with their ugly tactics,’ he said.

‘Nothing in Australia comes even close to the indescribable atrocities carried out on an industrial scale by the Nazis, and to suggest that we are on the road to Auschwitz is beyond words and divorced from reality.’ 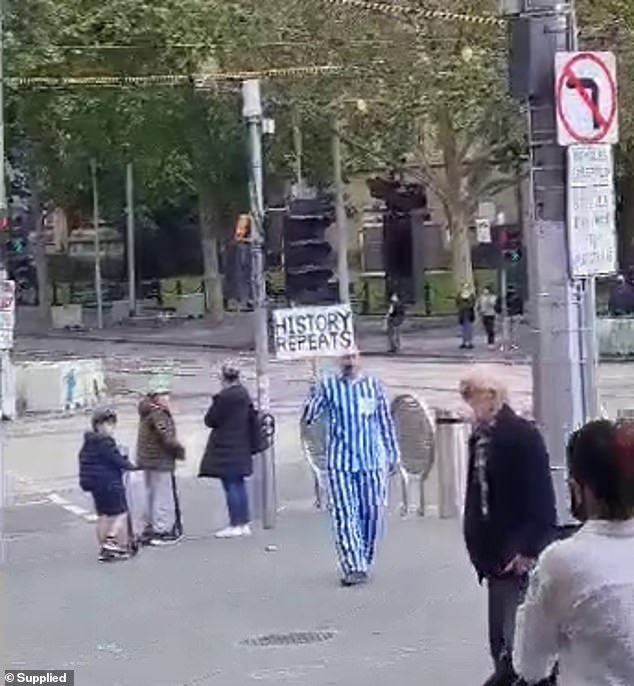 Several witnesses berated the man, calling him an ‘absolute disgrace’, before one woman physically assaulted him

‘People can of course voice their disagreement with government policy, but they should not appropriate the Holocaust to advance their causes.’

Hundreds of demonstrators swarmed outside outside the Victorian Parliament on Saturday to protest against vaccine mandates and the Andrews Government’s new proposed pandemic management bill.

The protesters chanted ‘kill the bill’ and other anti-vaccine mandate messages.

One person was arrested for damaging a police car but Victoria Police declared the protest was ‘peaceful’.

The legislation passed the lower house on Thursday and will give the premier power to declare a pandemic and extend it for three months at a time, for as long as considered necessary.

It will require the support of three crossbenchers to pass the upper house.