Meanwhile, Democrat Terry McAuliffe was unable to muster enthusiasm among voters. He saw his support drop in blue parts of the state compared to how President Joe Biden did in the same areas the year before. And a comment on education during a debate turned out to be a major misstep for McAuliffe’s bid.

Exit polls showed white women went for Youngkin after Biden carried them in the 2020 presidential election. Black turnout was down even as overall voter turnout was up. 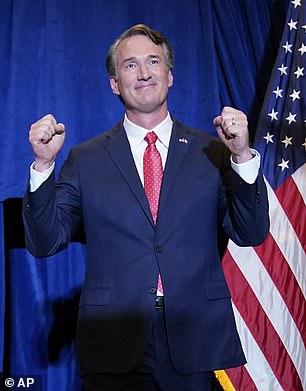 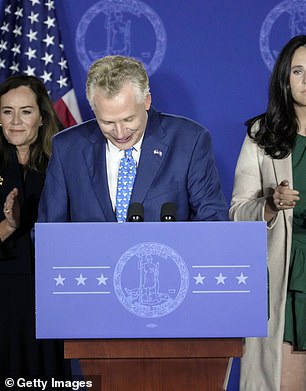 Republican Glenn Youngkin won white women and suburbs; Democrat Terry McAuliffe saw his support drop in blue parts of the state that Biden did well in 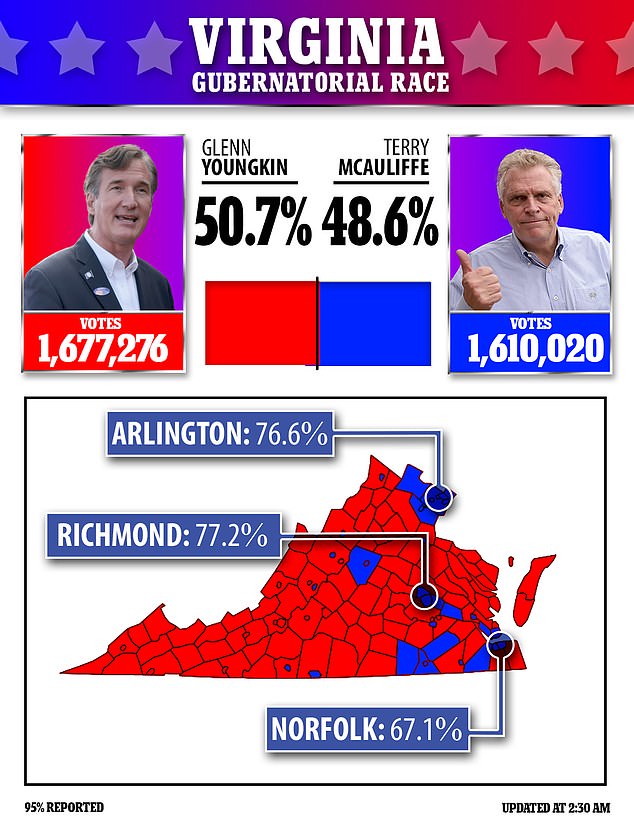 Republicans haven’t won statewide in Virginia since 2009. That year Bob McDonnell was able to capitalize on a backlash against Barack Obama’s presidential win to take the state. His victory preceeded a GOP wave that gave Republicans control of the House in the 2010 midterms.

Virginia, however, also tends to elect a governor of the opposite party to whomever occupies the White House.

The record was broken only once in 40 years – when McAuliffe won the gubenatorial election in 2013. (Virginia elects governors in off years and does not allow them to serve consecutive terms).

McAuliffe could not manage a repeat victory, however.

Over all, white women and men along with rural voters and those in the suburbs went for Youngkin while McAuliffe’s support among black voters, moderates, and voters under 45 wasn’t enough to make up the difference. Youngkin won the race by 2 points.

Biden carried Virginia by 10 points over Donald Trump last year. He campaigned for McAuliffe – as did Jill Biden, Vice President Kamala Harris and second gentleman Doug Emhoff – but it wasn’t enough to secure a Democratic win.

Here’s a breakdown of how voters went in Tuesday’s contest:

White voters made up 74% of Virginia’s electorate this year compared to 67% in the 2020 election.

And they backed Youngkin over McAuliffe, 60% to 40%. Youngkin did even better among white voters than Trump did: the former president only won 53% of white voters in Virginia last year.

Also helping the Republican, Youngkin won 57% of the female vote this year compared to McAuliffe’s 43%. The Republican gubernatorial candidate made gains in that area over Biden, who won white wome in Virginia by 50% in 2020 compared to Trump’s 49%.

He also made gains among non-college education women. Youngkin won that group by 75% while Trump only carried it with 56% in 2020. 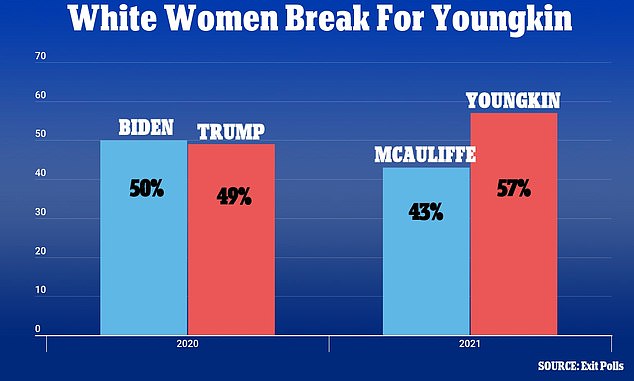 Youngkin also made gains with Latino voters – 55% backed him with 44% for McAuliffe.

Meanwhile, McAuliffe won black voters with 86% of their support. Turnout was down among that group, however, compared to 200.

McAuliffe tried to tie Youngkin to Trump at every opportunity. But Youngkin didn’t campaign with the former president and was careful to present his own credentials to voters.

The wealthy former private equity executive who had never before ran for political office presented himself as an outsider suburban-dad who wore a fleece vest.

A majority of Virginia voters said they disapprove of Trump, according to exit polls but only 4 in 10 said the same of Youngkin. 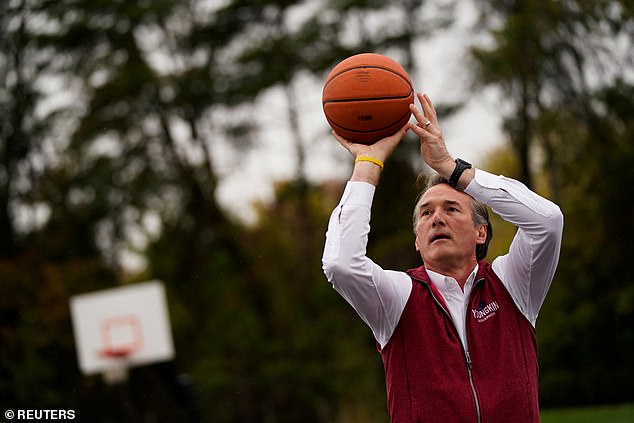 And Youngkin won the support of 17% of voters who said they disapprove of Trump, a good sign for Republicans who are worried about how the former president will factor into next year’s midterm election.

Most Youngkin voters – about 8 in 10 – said Youngkin supports Trump the right amount.

Biden, who campaigned with McAuliffee, has a negative approval rating in Virginia: 56% disapprove of his job compared to the 43% who approve.

Meanwhile, about half of voters said that Biden was not a factor in their vote for governor, according to an NBC News exit poll.

But the other half of the electorate did have the presiden on their mind: 28% said they voted for governor to express opposition to Biden, while 20% said it was to support him. 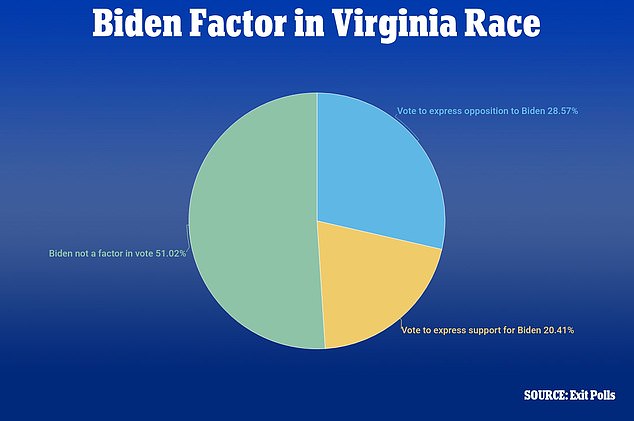 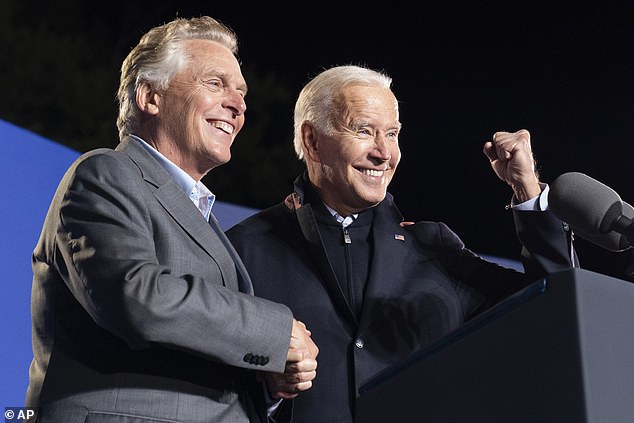 President Biden campaigned with Terry McAuliffe a week before the election

Biden, on Tuesday ahead of the polls closing, expressed confidence Democrats would win.

‘We’re going to win,’ he said at a press conference in Scotland where he attended COP26. ‘I don’t believe — and I’ve not seen any evidence that whether or not I am doing well or poorly, whether or not I’ve got my agenda passed or not is going to have any real impact on winning or losing.’

Youngkin flipped the suburbs in Republicans favor, a group that helped Biden win the presidency in 2020.

Moreover, McAuliffe’s support in key areas was downed compared to how Biden did in those same areas last year. 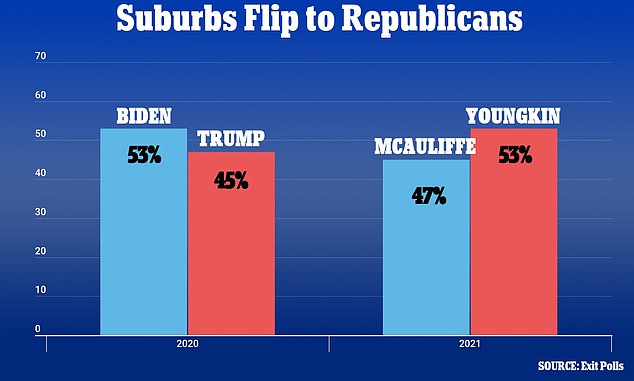 For example, in the heavily blue Northern Virginia area, McAuliffe’s support margin was by 26 points compared to Biden’s 38 points. In Richmond, the margin was 3 points for McAuliffe compared to 16 for Biden.

Loudoun county, just outside of Washington, D.C.,  went for McAuliffe by about 11 points – but Biden carried it by 25 last year.

And Youngkin outperformed Trump in some of the red areas of the state. His margin in the Tidewater area, for example, was 28 points compared to Trump’s 16 points last  year.

Youngkin turned education into a winning issue, taking advantage of a McAuliffe faux pas to make gains among women and dads with kids. He said he would ban the teaching of critical race theory in Virginia classrooms even though it is not a part of the curriculum.

Exit polls showed a quarter of Virginia voters said the debate over teaching critical race theory in schools was the single most important factor in their vote – and 71% of those voters backed Youngkin.

And slightly more than 50% thought parents should have say over what their child is taught in schools – while  8 in 10 of Youngkin supporters think they should have ‘a lot’ of say. Only 25% of McAuliffe voters said the same. 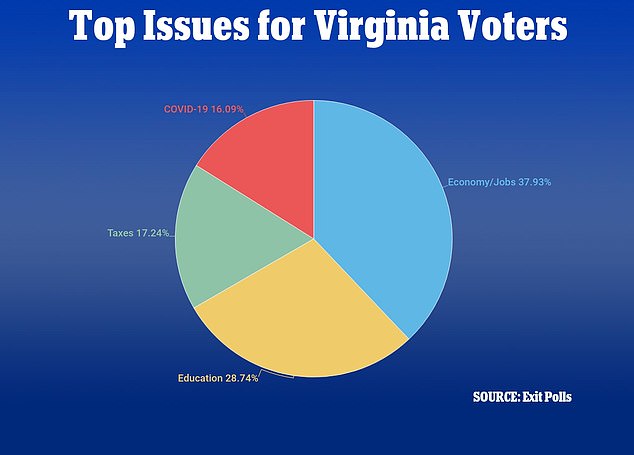 In the final weeks of the campaign, Youngkin took advantage of McAuliffe’s response during a debate on whether parents should be able to opt their children out of reading certain books.

‘I don’t think parents should be telling schools what they should teach,’ McAuliffe said.

Youngkin quoted McAuliffe repeatedly on the campaign trail and in ads, which boosted him among parents. Youngkin also won 58 percent of men with children, compared to the 49 percent Trump took last year.

Meanwhile, overall, 33% of Virginia voters called the economy the most important issue while 25% said it was education, about 15% chose taxes, and about 14% said the COVID-19 pandemic.

In New Jersey, Republican challenger Jack Ciattarelli and incumbent Democrat Phil Murphy were locked in a virtual draw as election night drew to a close.

That was a stunner as registered Democratic voters outnumber Republicans there by more than 1 million.