No, Jackie Justice is not a real UFC fighter, and Halle Berry’s film Bruised is not based on a true story.

The Netflix movie is a sports drama that follows Jackie Justice (played by Halle Berry), a disgraced MMA fighter who struggles to come back after a devastating defeat that derailed her career.

Not only did Berry play the main character, but she also directed the movie, made modifications to the script, and crafted Justice’s persona. Instead of patterning Justice’s character from a real MMA figure, Berry apparently took inspiration from her own life struggles to imbue Jackie Justice with authentic gritty emotions.

Speaking to the New York Times about how she related to the character, the Academy Award-winning actress said:

“I understand being marginalized as a Black woman and the anger, resentment, fear, and frustration that comes with all of that. If I could put all of that into this movie, all the things that I know so well, then I knew I could create a character that will not only be real but will resonate with women of different races, too.”

Valentina Shevchenko is one of the biggest octagon heroes in real life. However, the UFC women’s flyweight champ tapped into her villainous side as she portrayed the lead antagonist to Halle Berry’s Jackie Justice in Bruised.

Shevchenko plays the role of Lucia ‘Lady Killer’ Chavez, the division champion and Justice’s ultimate foe. It’s not entirely an unfamiliar role for Shevchenko as she has been an unstoppable UFC champion in real life. During an interview with Screen Rant Plus, Shevchenko gave fans a teaser of what they could expect from the movie Bruised:

“It’s everything like this. It definitely sacrifices. It’s more about this struggle, this fight, the inner fight, not just with your opponent, but with yourself, because you’re inside. It’s very hard, but when you can go over it, you find yourself, you get this open mindset and you just feel happy. This is what’s about, this movie, to find yourself through the struggles.” 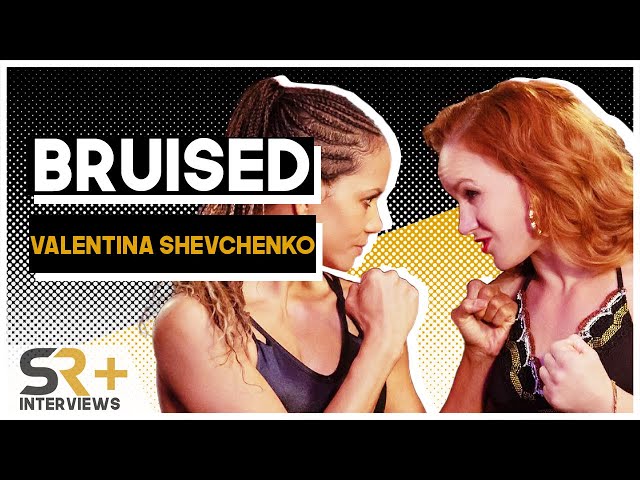