Chris Cuomo was spotted loading Christmas wreaths into his car on Thanksgiving day hours before going on a tirade about cancel culture and the holidays.

The CNN anchor and radio host was seen loading several Christmas wreaths into his Tesla before lamenting about hating the holiday on his SiriusXM radio show Let’s Get After It with Chris Cuomo.

Cuomo, 51 and his wife Cristina, 51, picked out their Christmas decorations in Amagansett on Thursday.

He was sporting dark camouflaged shorts, a black zip-up hoodie, a gray beanie and sneakers while loading the decor into the car.

Cristina was seen wearing blue jeans, a white and navy blue stripped sweater and a navy puffer jacket with her name emblazoned on it in gold carrying a bouquet to the car. 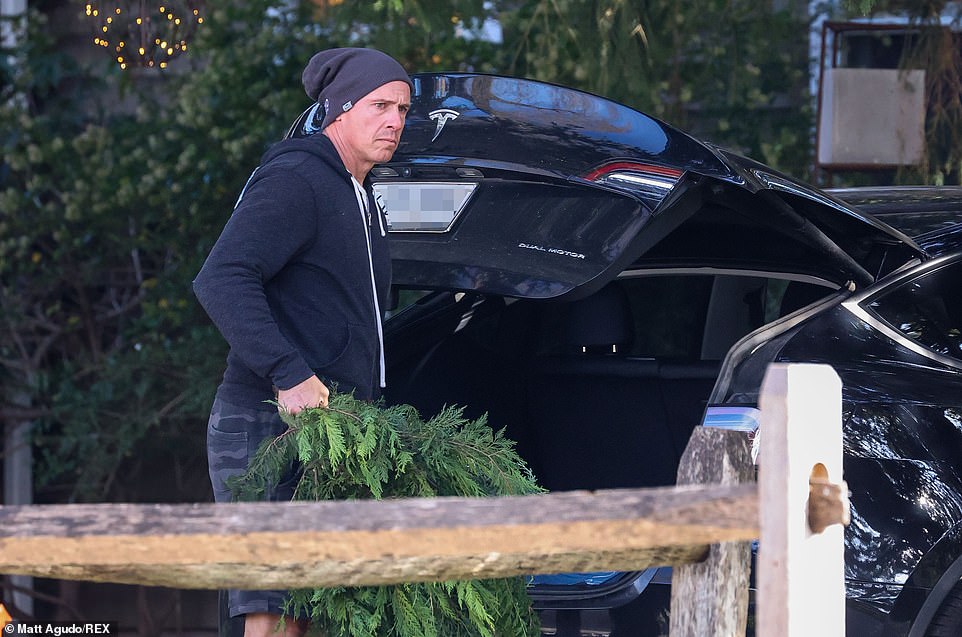 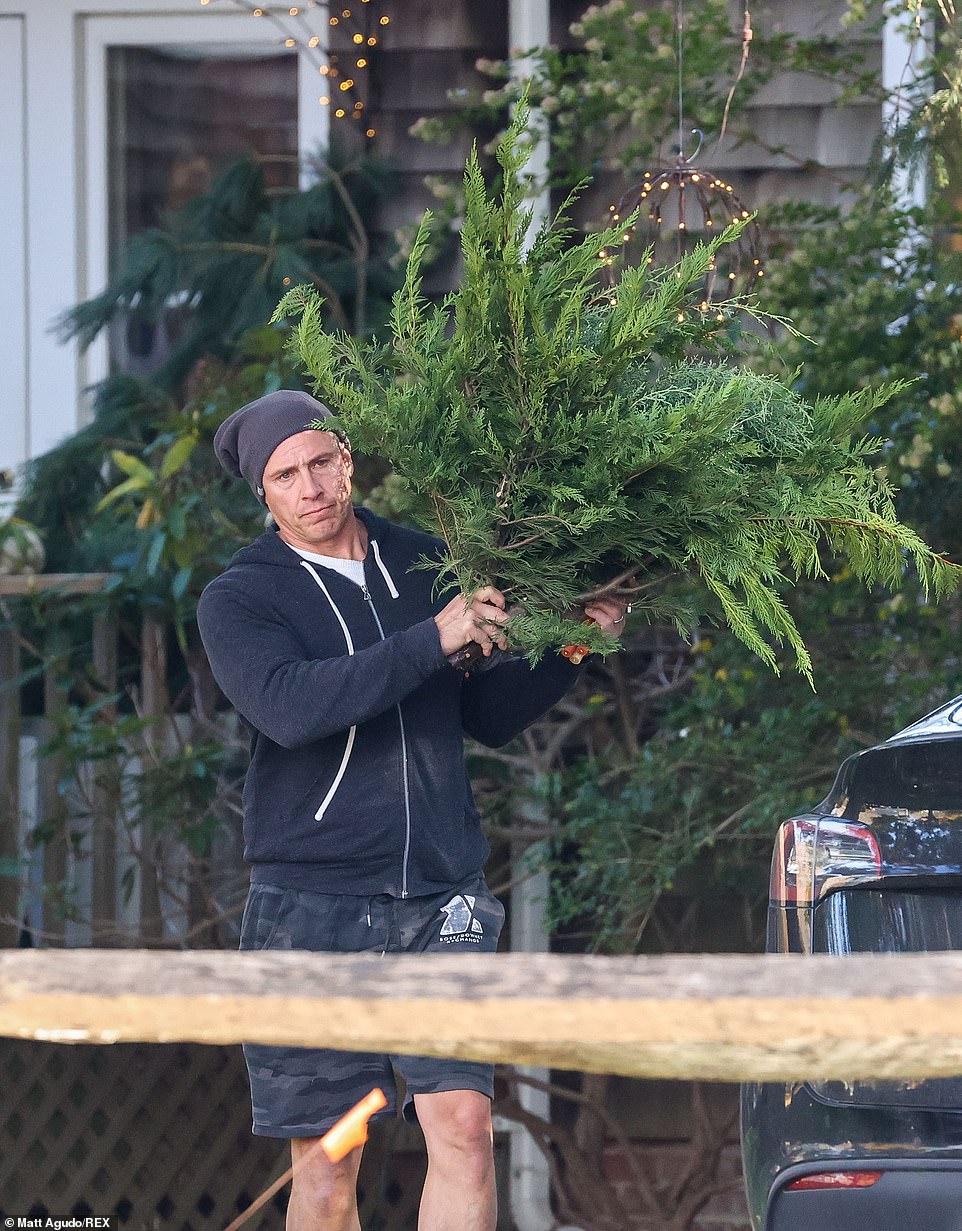 Cuomo, 51, was sporting dark camouflaged shorts, a black zip up hoodie, a gray beanie and sneakers on Thursday 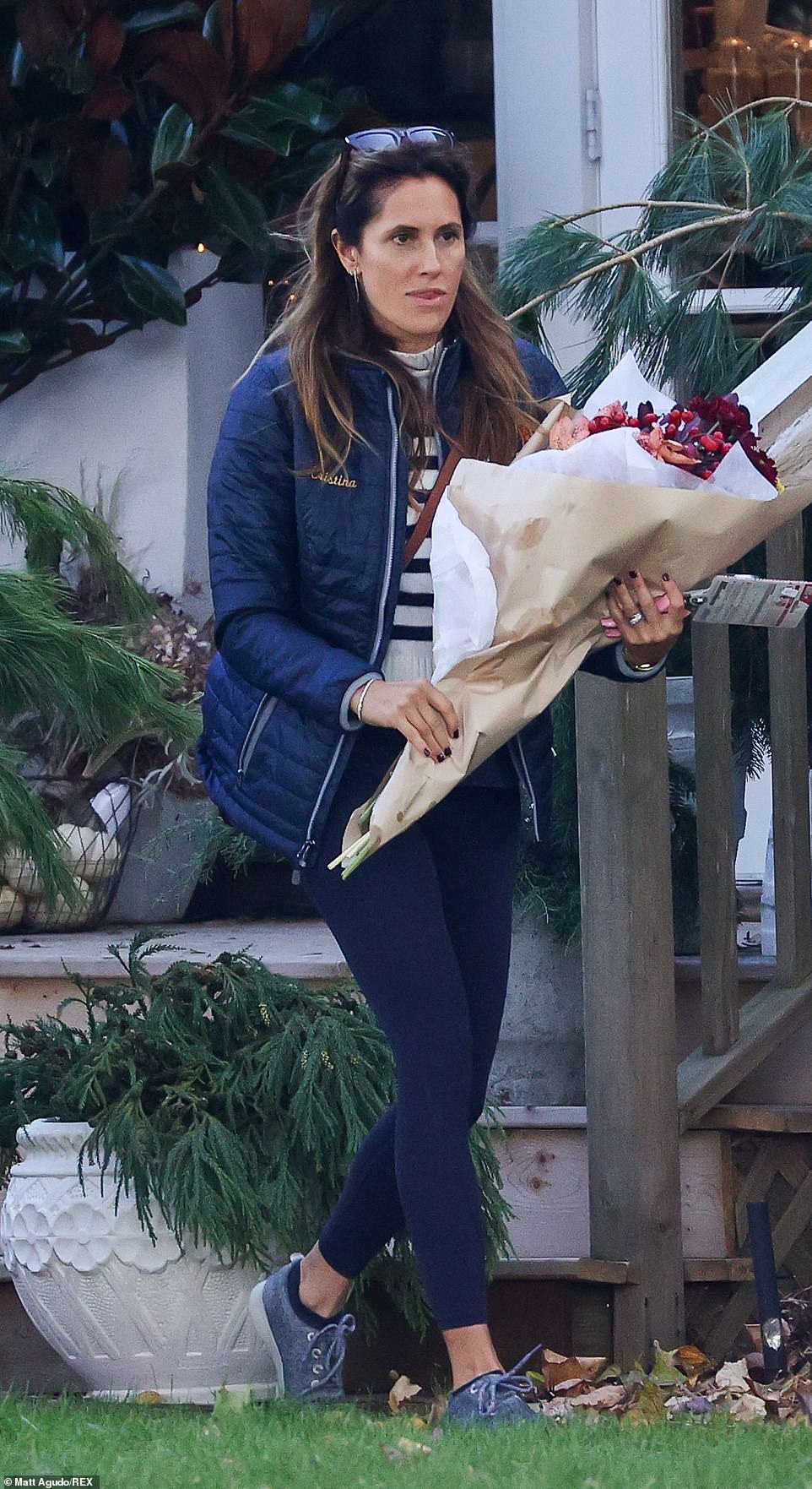 Cuomo’s wife, Cristina, 51, joined him as they picked out Christmas decorations to bring home with him 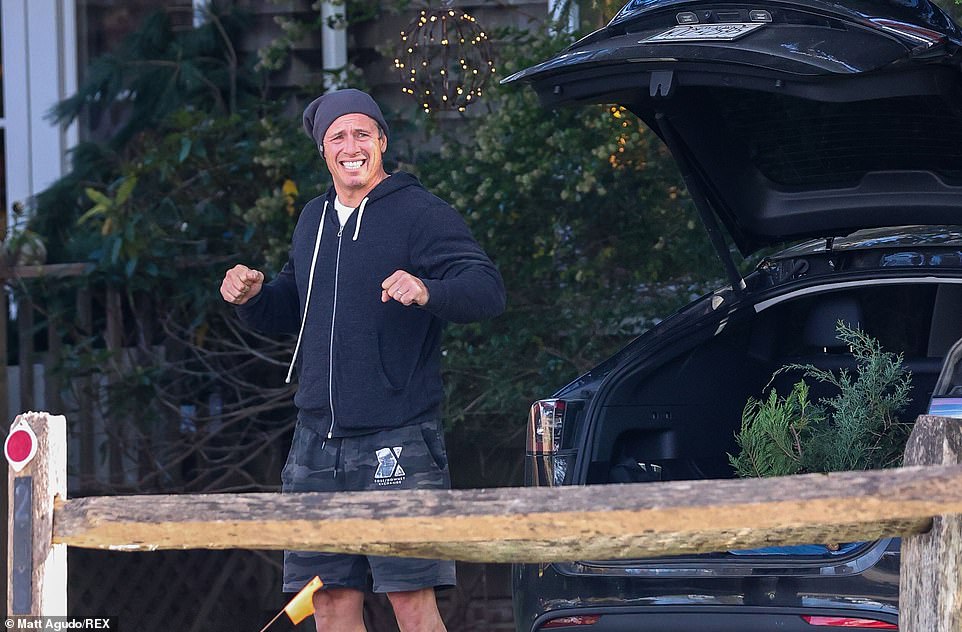 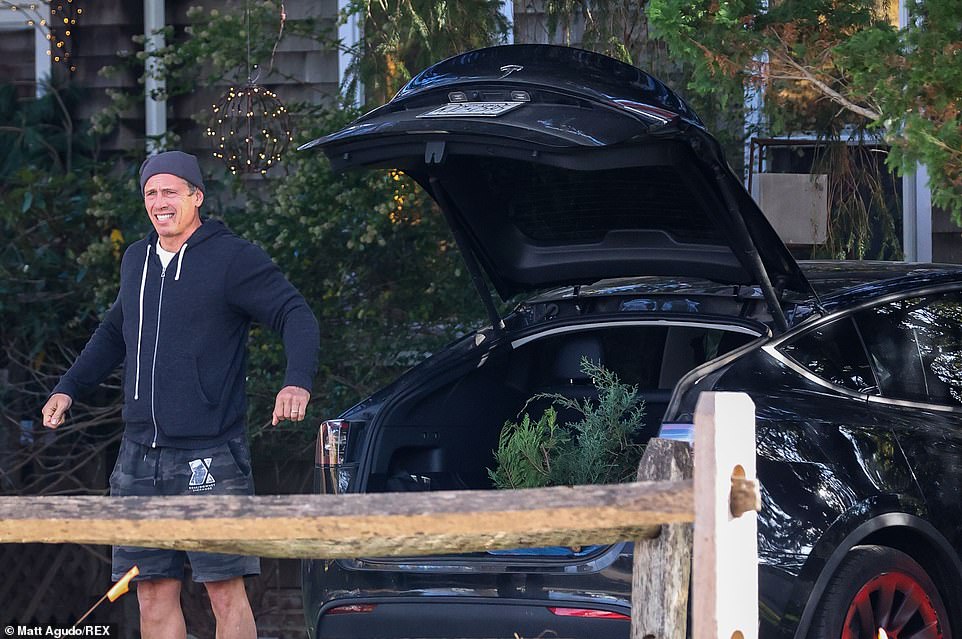 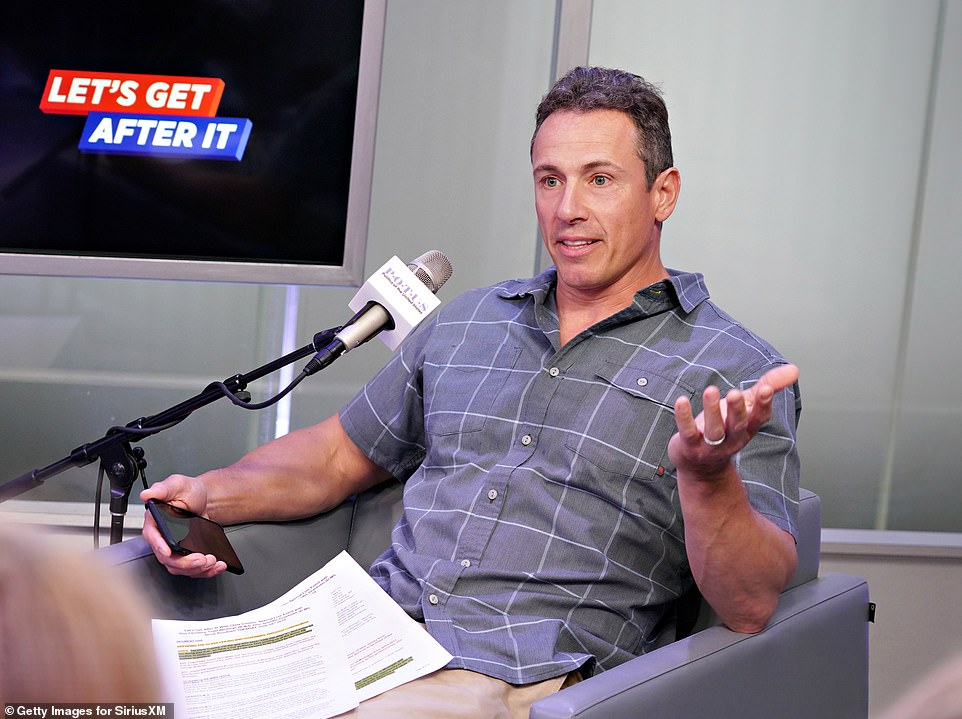 Cuomo’s holiday tirade aired on the latest episode of his Sirius XM radio show, Let’s Get After It with Chris Cuomo

In the latest edition of Let’s Get After It, released on Thursday, Thanksgiving day, Cuomo expressed his love for the holiday and his frustration with ‘woke folks’ who ‘kill it’ by pointing to the historical context.

Cuomo opened by stating that Thanksgiving is his ‘favorite holiday.’

He went on to list other holidays he doesn’t enjoy. ‘Christmas doesn’t do it for me. Halloween, candy, New Year’s, depressing,’ he claimed.

The radio host circled back to his ‘favorite holiday,’ Thanksgiving: ‘This is my jam and… this is my jam!’

But he complained that the national holiday is being ruined by ‘woke folk’ and cancel culture. ‘And now you woke folk trying to kill it for me,’ he said. ‘Listen, man, you know, don’t come up at me with all this pilgrim stuff.’

‘I don’t give a damn about the pilgrims and the indigenous people, the Native Americans, the Indians, wherever, whatever, whatever group of them wants to be called,’ Cuomo said. ‘I don’t care about any of that.’

He tweeted Thursday: ‘Today and everyday, I’m thankful for my girls Cara, Mariah & Michaela and for our family’s rock, my mom, Matilda Raffa Cuomo.’ 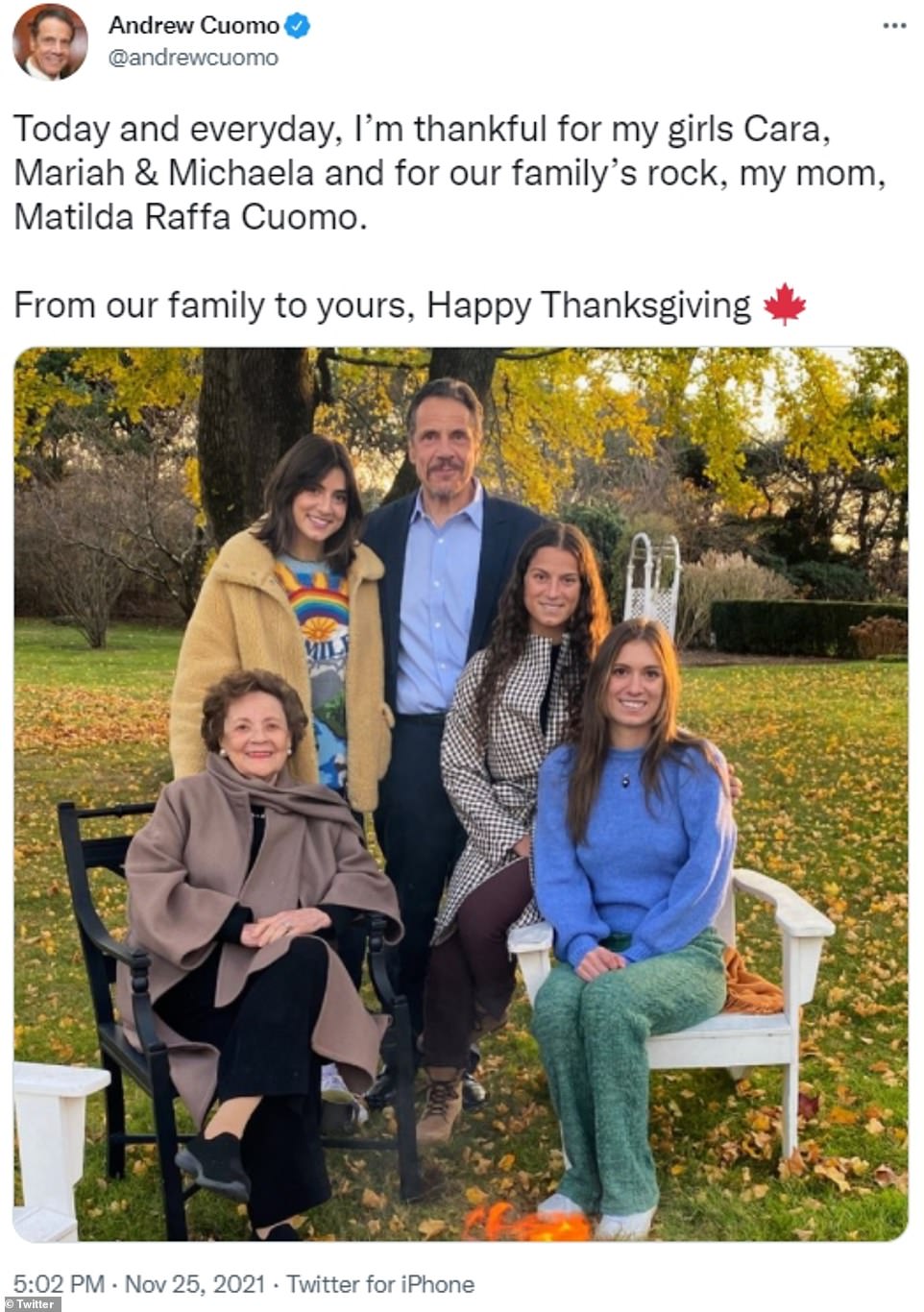 Andrew Cuomo, 63, has been with charged with a sex crime by the Albany County Sheriff’s Office. He denies the claims and his lawyer Rita Glavin said ‘timing of the charge’ is ‘highly suspect’ as it was announced on the same day New York Attorney General Letitia James announced she was running for Governor 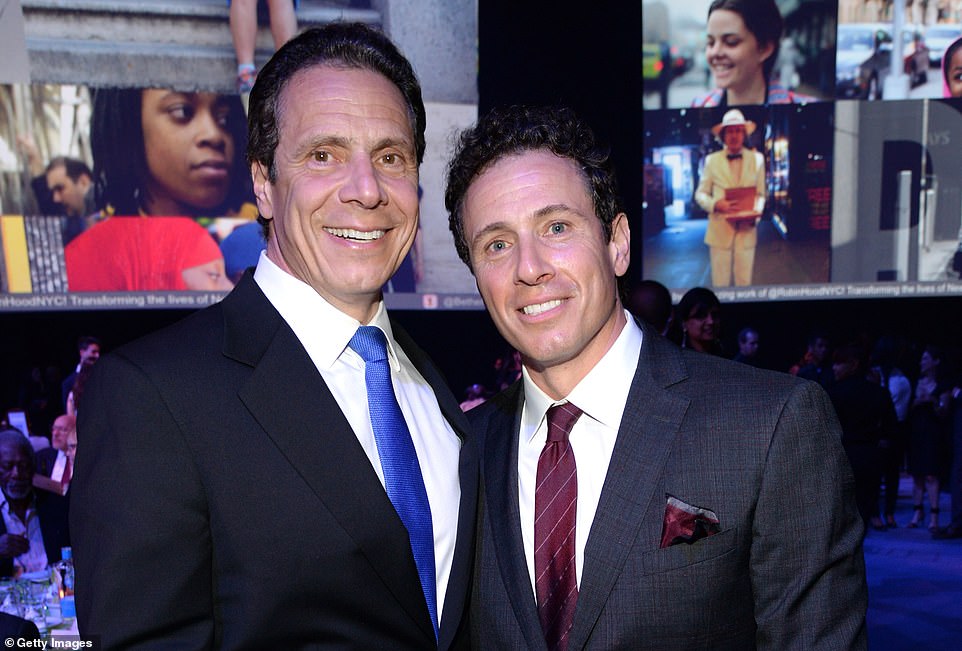 Thursday’s Thanksgiving episode of Let’s Get After It advertises: ‘Embracing the suck is hard, especially at a time when the hits keep on coming.’

Cuomo is listed to offer a ‘different perspective: take the time to reflect and be thankful for all the things that shape who you are. Be thankful for the failures because you learn from them, and appreciate that you can draw strength from what isn’t easy.’

His holiday tirade on the radio show comes as his daily primetime CNN program hit an all-time low this month, according to Nielsen Media Research ratings data.

Prime Time was the 25th-ranked cable news program in total average viewers for the week.

Cuomo’s ratings began to decline after his brother was forced to resign as governor of New York following accusations of sexual harassment by several women.

In August, Cuomo Prime Time was still CNN’s highest-rated show with an average of 964,000 viewers and 222,000 in the demographic.