All overseas travellers arriving into New South Wales, Victoria and the ACT will have to self-isolate for 72 hours upon arrival as fears grow about the new hyper-infectious Omicron variant of Covid.

The new quarantine restrictions came into effect at midnight on Saturday and require all international arrivals in the three states – including the fully vaccinated – to be tested when they land.

Returned travellers from those countries must enter hotel quarantine for 14 days on arrival into Australia.

The introduction of self-isolation rules in the three states comes only four weeks after Victoria and NSW removed hotel quarantine requirements for fully-vaccinated travellers on November 1. 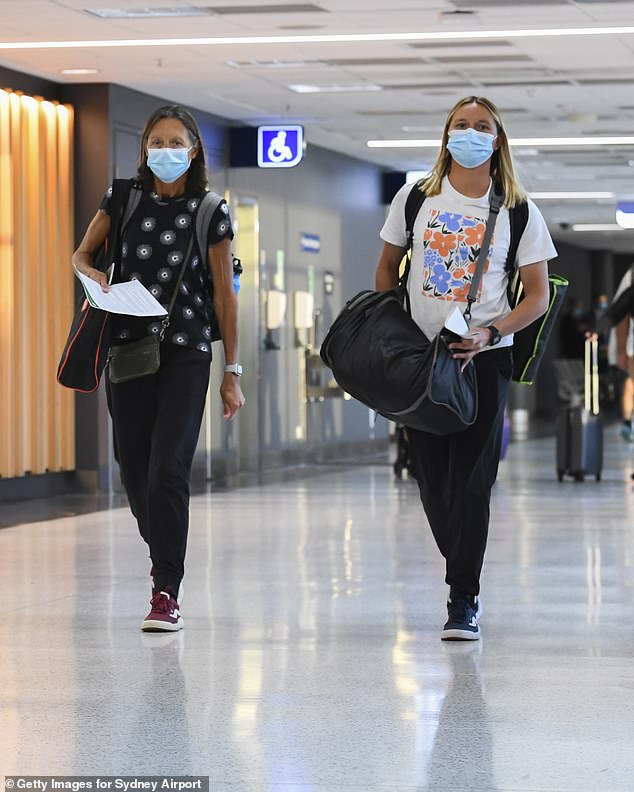 All overseas travellers arriving into New South Wales, Victoria and the ACT will have to isolate for 72 hours upon arrival amid fears of the growing Omicron African variant of Covid-19. Pictured are overseas arrivals on November 1 at Sydney Airport as hotel quarantine requirements were removed in NSW 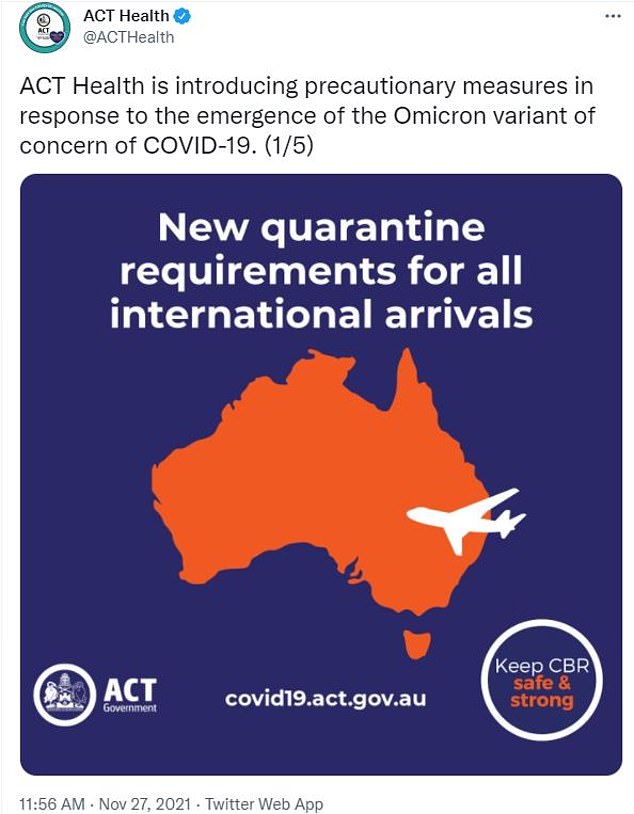 The ACT ended hotel quarantine for overseas arrivals on November 12.

The Victorian health department says the new rules will apply to unvaccinated children under 12 and unaccompanied minors, along with any household contacts of the returned traveller.

All airline cabin crew arriving from overseas into NSW will also have to isolate for 14 days or until their next departure.

These rules are slightly different in Victoria with vaccinated cabin crew to isolate for 14 days if they had been to one of the nine African countries of concern.

Western Australian Premier Mark McGowan earlier on Saturday evening shut his state’s borders to South Australia in a bid to lock out the mutant new strain.

The ruling means only double-vaccinated South Australians can enter WA, where they must immediately go into quarantine for 14 days.

The changing of border rules comes amid fears the newly-named Omicron ‘super-variant’ is already in Australia via a repatriation flight from South Africa.

There are 20 returned travellers quarantining in the Northern Territory who were repatriated from South Africa last week – one of whom has tested positive to Covid.

Chief Medical Officer Paul Kelly said authorities were also in the process of tracking down about 100 Australians who recently arrived from the blacklisted countries and will now need to go into quarantine for two weeks. 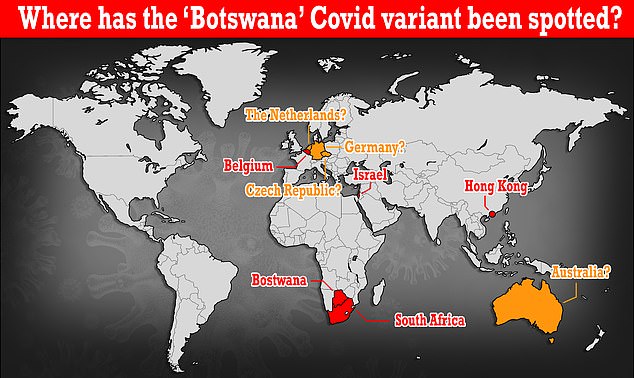 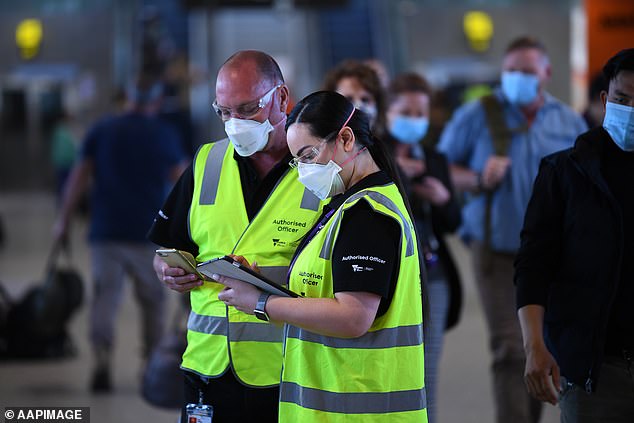 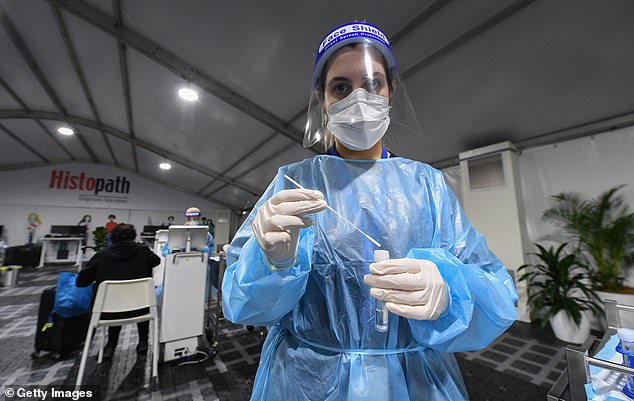 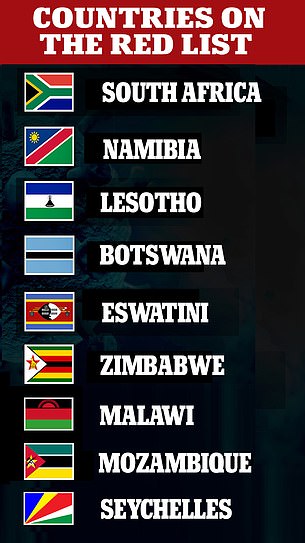 The new rules include banning non-Australian travellers from the regions, enforcing supervised quarantine for returned passengers and suspending all flights from the nine countries for two weeks.

‘There are currently no known cases of the Omicron variant in Australia,’ Health Minister Greg Hunt said.

Professor Kelly warned it was too early to tell if Australia would be plunged back into lockdown if the virus made its way across the Indian Ocean.

‘In terms of ruling in or out, what else we might do, as the health minister has clearly said, we will do what we need to do,’ he said. ‘

‘At this stage, to move toward speculation about where we might end up in Australia, even if it came here and we don’t have it here yet, that is premature.’

He said there was too little information about the current variant to make any long-term decisions.

Germany’s initial sequencing suggests a traveler from South Africa was carrying the virus with several mutations shared by Omicron.

Belgium has also revealed its first Omicron case – named by the World Health Organisation on Friday night – prompting EU chiefs to call for an ’emergency brake’ on all travel from southern Africa after it was also found in Israel. 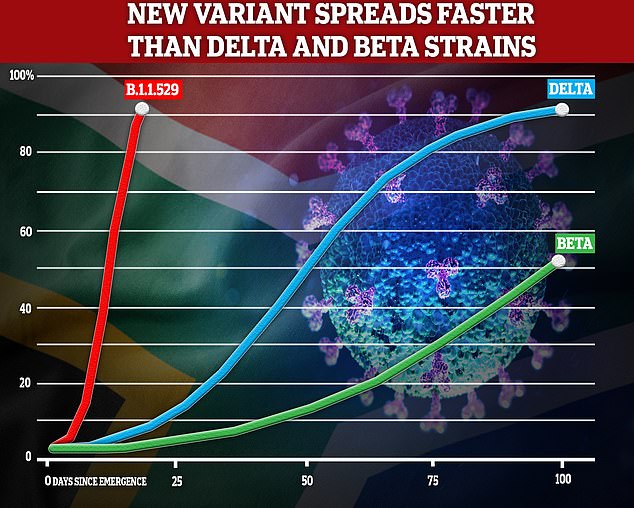 The Belgian health ministry said a case of the new B.1.1.529 strain was confirmed in an unvaccinated young woman who had returned from Egypt 11 days ago, suggesting it is already being seeded across the continent and is widespread in Africa.

It came as the WHO designated it a ‘variant of concern’, its highest category.

Experts said there is early evidence to suggest Omicron has an ‘increased risk of reinfection’ and its rapid spread in South Africa suggests it has a ‘growth advantage’.

However, Angelique Coetzee, the chairwoman of the South African Medical Association, said that it was too early to begin imposing travel restrictions. 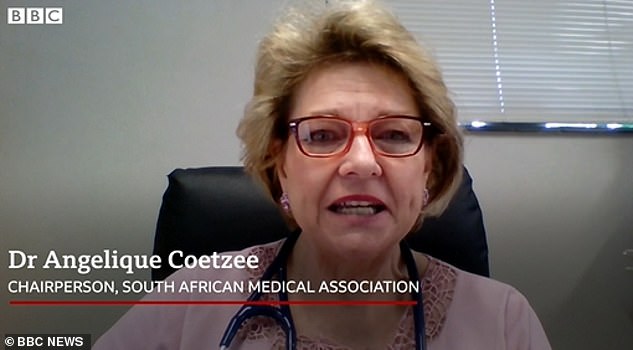 Angelique Coetzee, the chairwoman of the South African Medical Association, said that it was too early to begin imposing travel restrictions

‘It’s a hasty decision,’ she said.

‘I would understand if it was two weeks later and we knew much more about this viral infection that is going around, this mutation.

‘But for now, it is a storm in a tea cup, we have only become aware of this viral mutation … in the last week. So far what we have seen are very mild cases, so I’m not sure why we are all up in arms.’ 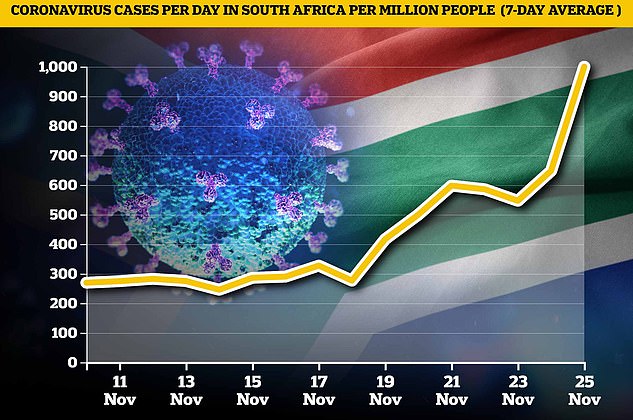 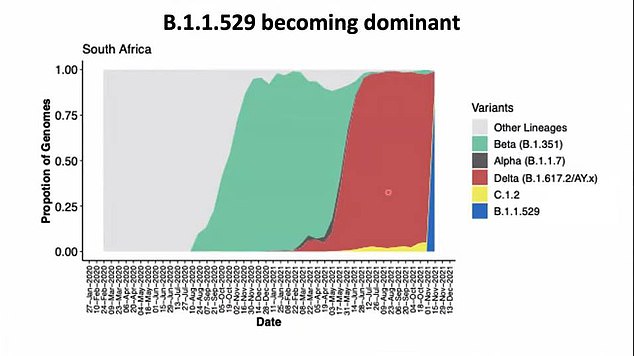 This chart shows the proportion of cases that were the B.1.1.529 variant (blue) and Indian ‘Delta’ variant (red) over time in Guateng province in South Africa, where the virus is most prevalent. It suggests that the mutant strain could outcompete Delta in the province within weeks

European Commission president Ursula von der Leyen had earlier called for an EU-wide travel ban to southern Africa warning that the Omicron strain could be world-dominant in months.

Meanwhile, US President Joe Biden will restrict travel from South Africa and seven other countries starting on Monday, following the detection of the new variant.

On Friday, Australian Prime Minister Scott Morrison said the Omicron strain was not a ‘variant of concern’.

‘But that can change,’ Mr Morrison said.

‘And we monitor all of these variants and we note the responses that are made by other countries and we consider those in real time.’

‘If the medical advice is that we need to change, we won’t hesitate,’ he said on Friday. 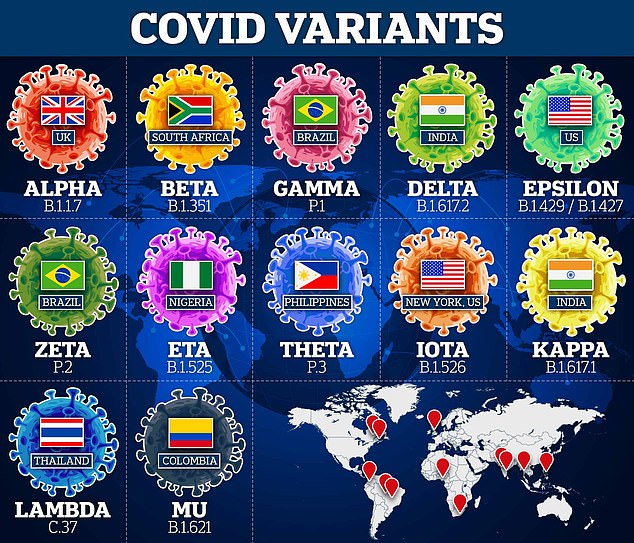 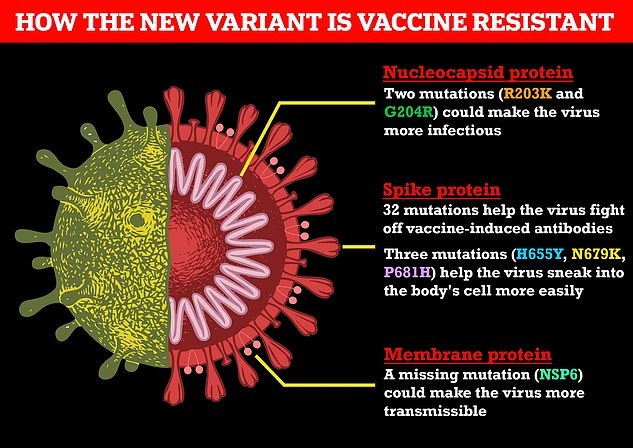 He argued the new strain did not appear to lower the effectiveness of the Covid-19 vaccine.

‘It’s highly unlikely to affect the efficacies of the vaccine,’ he said.

‘This is a very different situation to the Delta emergence and the high case numbers we saw in India. We are very highly vaccinated.

‘There is no basis for change.’

What do we know about the Omicron variant?

Scientists have said they are concerned about the B.1.1.529 variant, named by the World Health Organisation as Omicron, as it has around 30 different mutations – double the amount present in the Delta variant.

The mutations contain features seen in all of the other variants but also traits that have not been seen before.

UK scientists first became aware of the new strain on November 23 after samples were uploaded on to a coronavirus variant tracking website from South Africa, Hong Kong and then Botswana.

On Friday, it was confirmed that cases had been identified in Israel and Belgium but currently there are no known cases in the UK.

Professor Adam Finn, a member of the Joint Committee on Vaccination and Immunisation (JCVI), told Good Morning Britain on Friday that sequencing is being carried out around the UK to determine if any cases have already been imported.

Work is also under way to see whether the new variant may be causing new infection in people who have already had coronavirus or a vaccine, or whether waning immunity may be playing a role.

Professor James Naismith, director of the Rosalind Franklin Institute in Oxford, has said the new variant will ‘almost certainly’ make vaccines less effective, though they would still offer protection.

Pfizer/BioNTech, which has produced a vaccine against Covid-19, is already studying the new variant’s ability to evade vaccines.