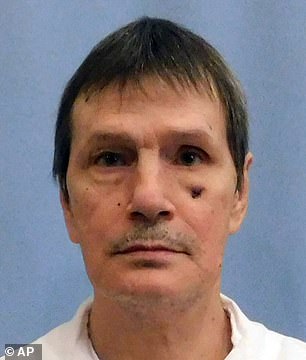 Doyle Lee Hamm, 64, died from lymphoma for which he had been having treatment even before his scheduled 2018 execution which was botched by doctors

A death row inmate from Alabama who survived an excruciatingly painful botched execution in 2018 has died at the age of 64, from lymphoma.

Doyle Hamm fought an ‘extremely aggressive lymphoma’ since 2014 according to his lawyer Bernard Harcourt.

Complications from the lymphoma ended up contributing to Hamm’s death.

Hamm had been sentenced to death by lethal injection on February 22, 2018, but his execution was ‘botched’ and after several failed attempts to insert a needle into his veins, the execution was called off as midnight approached.

It saw him stabbed 11 times in the legs and groin with needles as doctors struggled to find a vein. 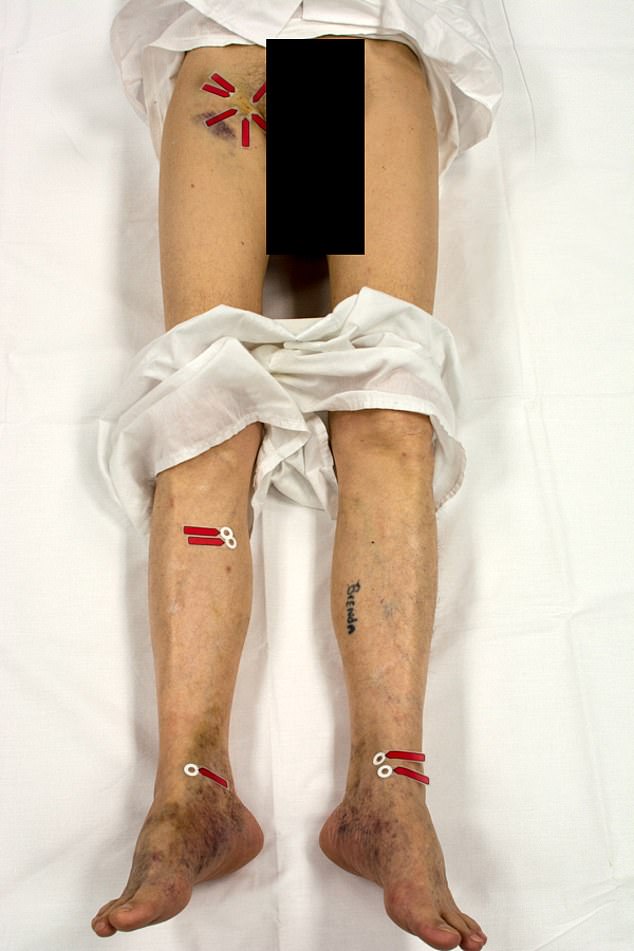 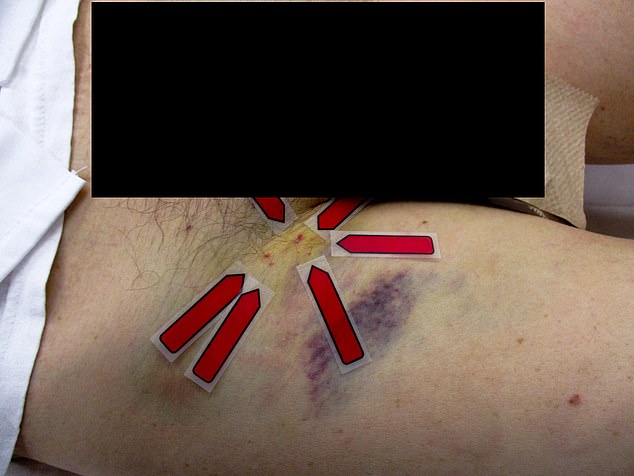 Hamm, who was too weak to stand after the ordeal, was left bleeding from the groin and urinated blood an hour later, a medical examiner’s report revealed.

Hamm’s attorney had warned ahead of time that cancer treatment had left him with compromised veins and that he was likely to be subjected to ‘cruel and needless pain.’

‘The result was an agonizing, torturous botched execution that left him on the gurney for two-and-a-half hours as they picked and prodded at his legs and groin, trying to find a vein,’ Harcourt told AL.com. ‘It was unconscionable.’

The medical examiner’s report includes images of Hamm’s injuries and give some account of his suffering. 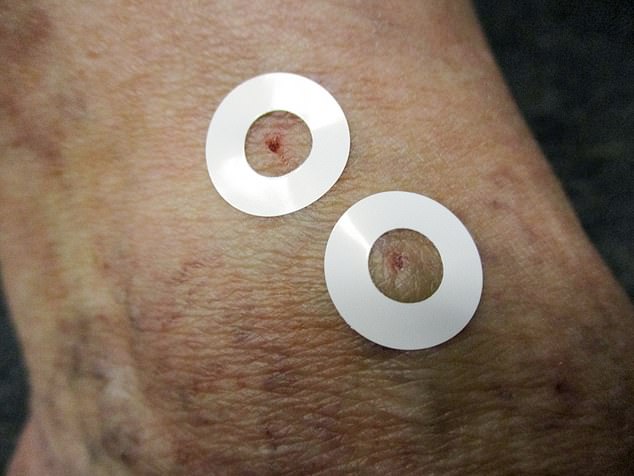 After some time, an official in the room speaking on a cellphone said the execution was being called off, despite doctors protesting that they wanted to continue 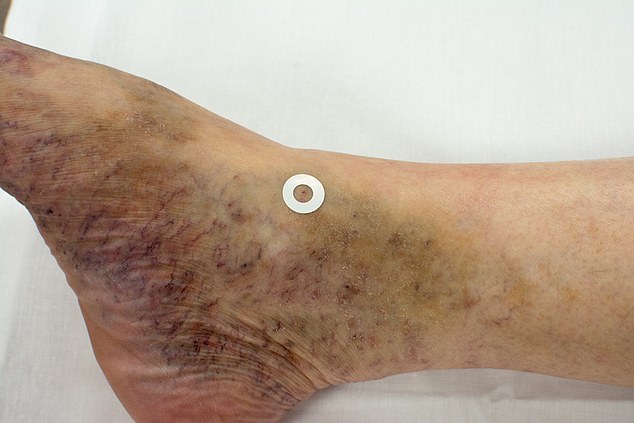 ‘This was clearly a botched execution that can only accurately be described as torture,’ Harcourt said in a statement after a doctor examined his client.

According to an interview with Hamm carried out by Dr Mark Heath, an anesthesiologist from New York, on the night of the execution he was taken into a chamber with around nine people inside and strapped down to a gurney.

Two men dressed in hospital scrubs then took a leg each and worked their way up attempting to find a vein.

In total he was stabbed five times, three on one leg and two on the other.

Hamm said that each puncture involved multiple ‘probing advances’ with the needle, during which it was partially withdrawn then reinserted.

‘The continued probing was painful,’ the report notes. ‘One of the probing needle advances was extremely painful and he felt that the ‘shin bone’ in his right calf was reached by a needle. 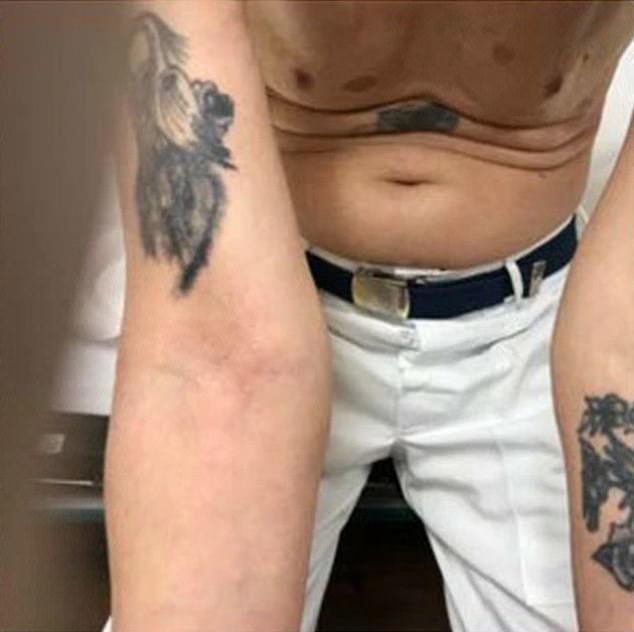 Hamm was left with more than 11 puncture marks in his legs and groin, some of which may have penetrated his bladder or femoral artery 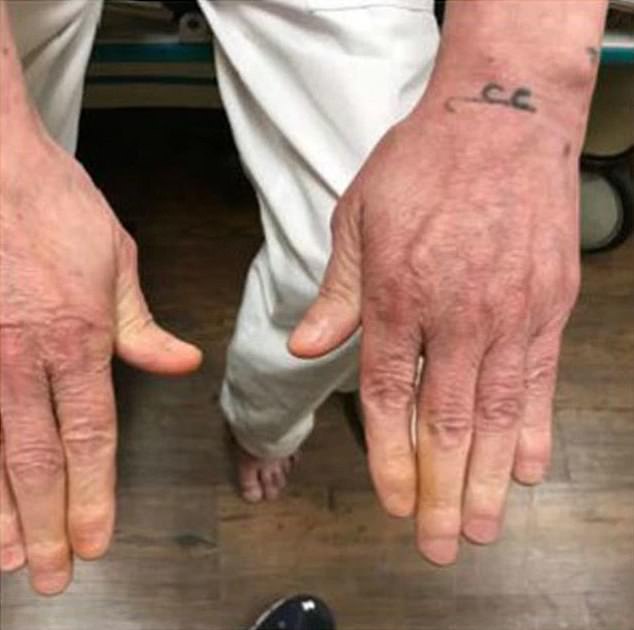 He said that throughout the botched attempt Hamm was ‘lying there praying and hoping that they would succeed because of the pain.’ Hamm collapsed when they finally gave up and took him off on a gurney 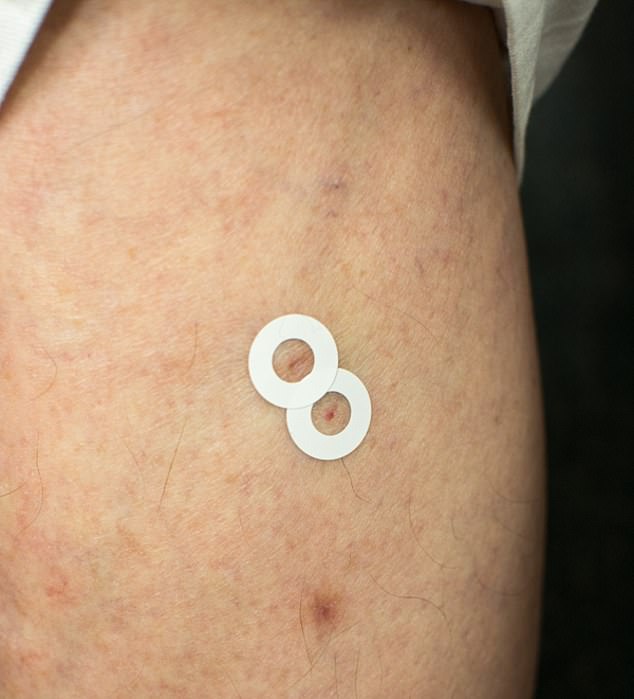 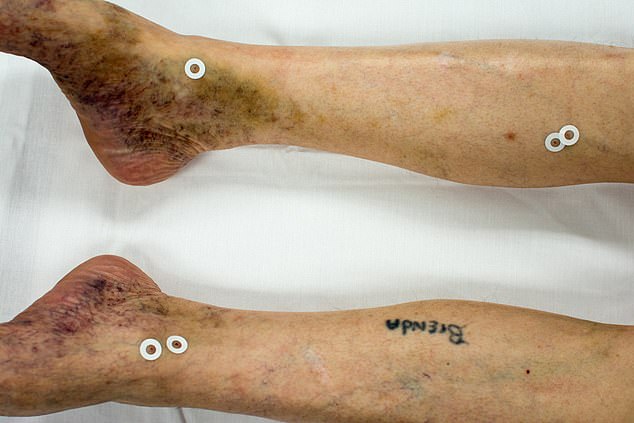 Two doctors took a leg each in an attempt to find a vein, with one needle going so deep it hit Hamm’s shin bone

‘He estimates that the probing in his right calf persisted for about 10 minutes and states that he could feel them ‘rolling and mashing’ the tissue in his leg.

‘Overall he estimates that the two men spent about 30 minutes attempting IV access in his lower extremities.’

After the execution team admitted they could not gain access to a vein in his legs, a second team was brought into the room with an ultrasound device.

The second team, consisting of a man and a woman, then began scanning his groin for a vein before making a mark on his skin.

‘The doctor advanced a needle into Mr. Hamm’s groin,’ the report staes.

‘It is not clear whether local anesthetic was administered.

‘Mr. Hamm felt the needle penetrating deep into his groin and pelvis. He stated that this probing was extremely painful. 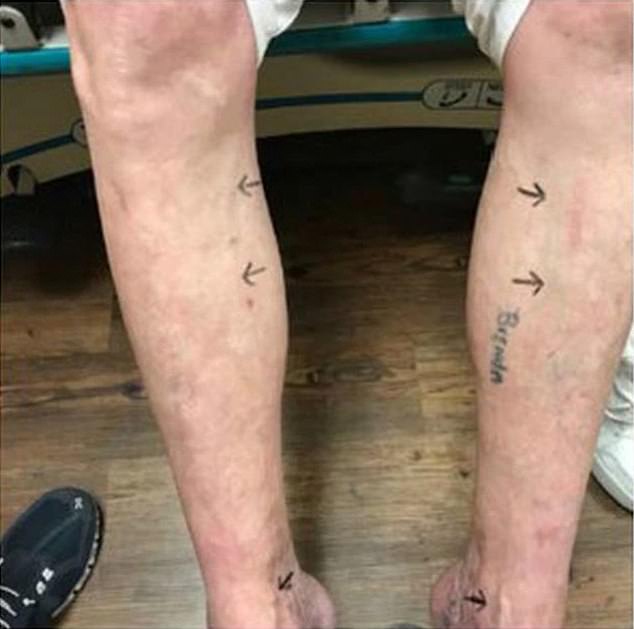 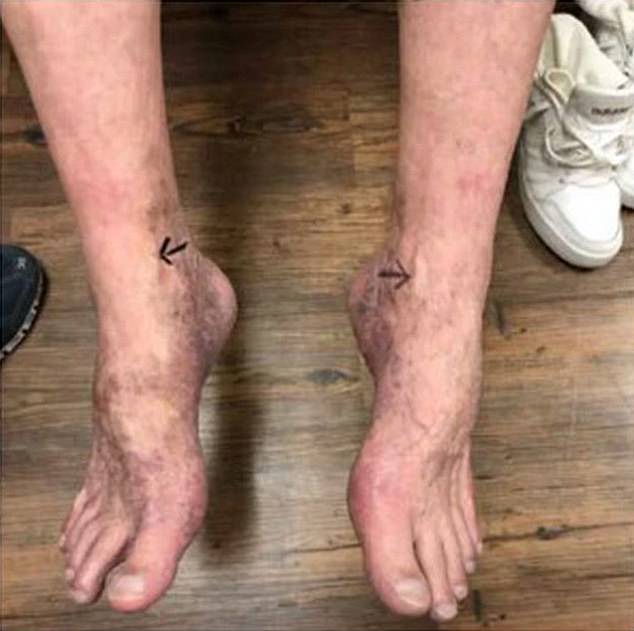 ‘During this time Mr. Hamm began to hope that the doctor would succeed in obtaining IV access so that Mr. Hamm could ‘get it over with’ because he preferred to die rather than to continue to experience the ongoing severe pain.’

Doctors had to request several new needles and at one point Hamm began bleeding from the groin. The blood was enough to soak a pad which had to be replaced.

After some time, an official in the room speaking on a cellphone said the execution was being called off, despite doctors protesting that they wanted to continue.

The doctors were told to ‘get out’ and left the room without applying pressure to the bleeding area, or giving instructions for Hamm’s treatment. 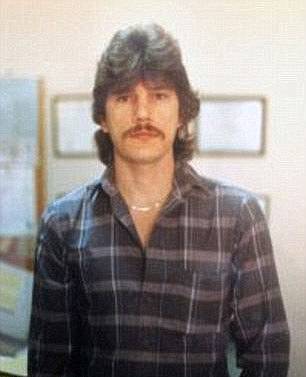 The victim, Patrick Cunningham, an employee of Anderson’s Motel in Cullman, Alabama was shot in the head during a robbery that apparently netted about $410

Hamm had to be lifted off the gurney because he was unable to stand and taken back to his holding cell before being escorted to the infirmary, where bandages were applied to his wounds.

Around an hour after the execution he urinated blood, and also later developed a chest cough.

Prisoners have a constitutional protection against cruel and unusual punishment, and courts can decide if certain execution techniques violate that right.

Hamm, had been on death row since December 1987 when he was convicted of killing motel clerk Patrick Cunningham.

The victim, an employee of Anderson’s Motel in Cullman, Alabama was shot in the head during a robbery that apparently netted about $410.

After the botched attempt, he was told that there would be no future attempts to execute him.