An NHS doctor who suffered horrendous injuries in an acid attack by her former boyfriend will need more than £60,000 of medical treatment, her family have revealed.

Junior doctor Rym Alaoui, 25, suffered ‘horrific life-changing’ injuries when her ex, who had disguised himself in a ‘fat suit’, threw sulphuric acid in her face as she opened the front door of her home in Brighton in May.

Milad Rouf, 25, who trained with her at Cardiff University, was sentenced to 15 years after pleading guilty to throwing the acid with the intent to maim and disfigure.

Speaking for the first time, her devastated family say the ‘kind, loving and caring’ young doctor faces years of painful surgery but is desperate to return to her dream job in the NHS.

Dr Alaoui suffered catastrophic injuries in the ‘horrific attack’ with severe burns to her face, neck, eyes, chest and arm. She has been left blind in her right eye and unable to close her eyelids at night.

But family say the full treatment for Dr Alaoui, who worked at Brighton’s Sussex County Hospital, is not available on the NHS and will need to be paid for privately.

Sister Alya Alaoui said: ‘Everyone who knows her knows how genuinely kind, loving and caring she is. 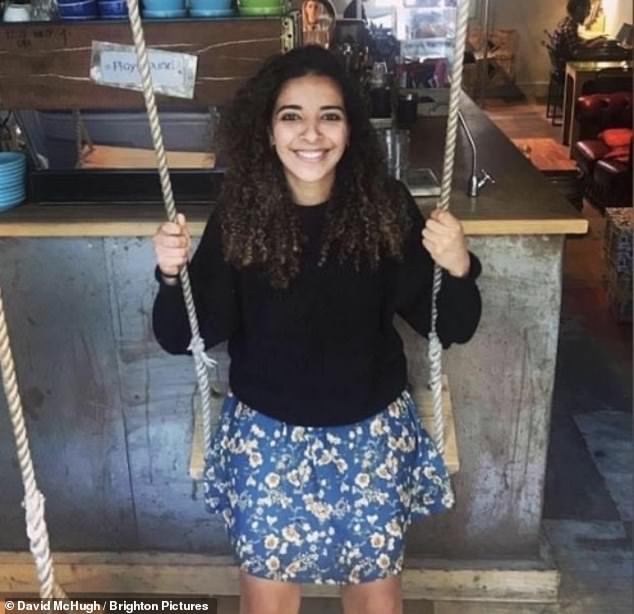 Junior doctor Rym Alaoui, 25, suffered ‘horrific life-changing’ injuries when her ex threw sulphuric acid in her face as she opened the front door of her home in Brighton in May 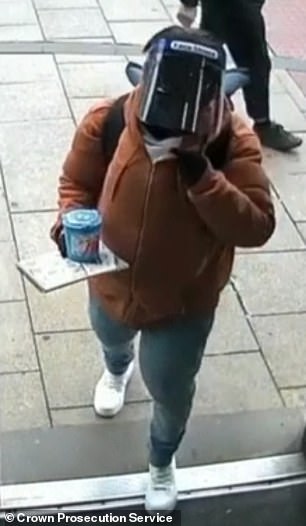 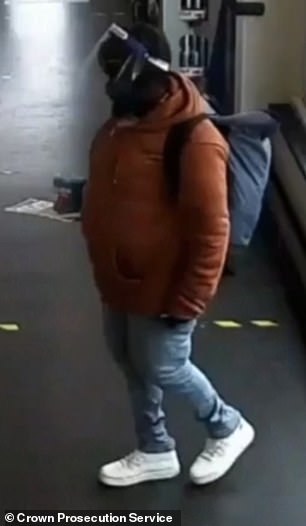 Milad Rouf disguised himself in a fat suit before throwing sulphuric acid over his former colleague and girlfriend. He was seen on CCTV wearing an orange hooded jumper, blue jeans, white trainers and black face mask before the attack 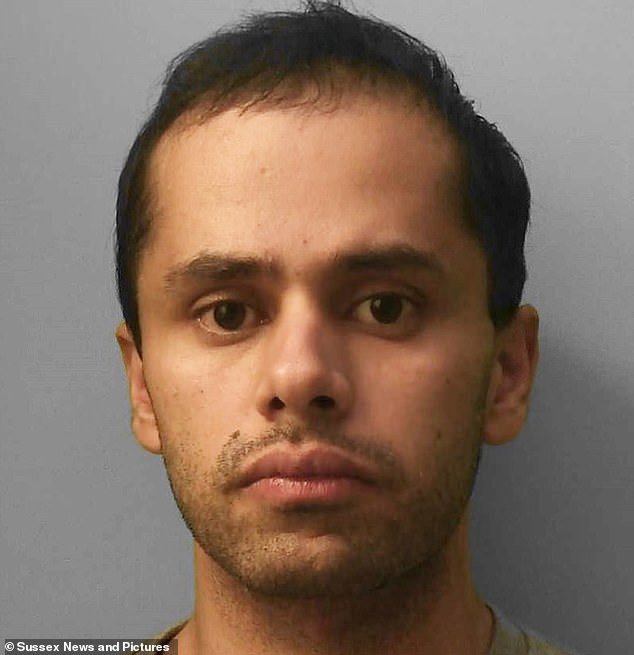 Following the attack on Steine Gardens in Brighton on May 20 this year, police began conducting house-to-house enquiries and identified a nearby property with doorbell footage.

This showed Rouf wearing a black jacket, white trainers, blue jeans and carrying a blue backpack – first walking past before the attack, and then fleeing the scene after.

From there, officers carried out a trawl of the city’s CCTV cameras to trace the suspect’s movements.

This involved contacting dozens of businesses to access their footage and watching hundreds of hours of CCTV to identify where and when Rouf went.

They were able to see Rouf ran from Steine Gardens onto Edward Street and then Princes Street. Rouf was next seen in Old Steine but wearing different shoes – now black trainers with white soles.

Rouf was seen again heading down the steps to the east of Brighton Pier. He was seen changing for around five minutes before re-emerging looking of smaller build, carrying a large white bag and wearing a beanie hat and glasses.

Rouf then disposed of the white bag in a bin on the seafront. He then walked around the city, stopping at various bins along the way, before heading to the Primark store to buy a sweatshirt, blue jacket with white detail and a cream backpack. He put the clothes on in the store and then left, returning twice more to buy sunglasses and an ‘LA’ baseball cap.

From there, the suspect returned to the seafront and asked a security guard what time the bins are emptied, because he believed he had accidentally thrown away a phone. He retrieved a mobile phone from a pair of jeans in a bin, before leaving the area and heading towards Brighton train station where he boarded a train for London Victoria.

Rouf was identified from CCTV images after disposing of his disguise, and from descriptions provided by witnesses. He was arrested at his home in Cardiff, where a blue jacket matching the one purchased by the suspect in Primark was found. Further enquiries in Cardiff uncovered the LA baseball cap and the cream backpack.

Officers searching his address also found a hand-written list in his bedside drawer titled ‘costume 1’ and listing a number of items – the majority of which matched equipment and clothing worn by the suspect at the time of the attack.

Police also worked to establish Rouf’s movements before the attack. They found he arrived in the city by train that morning, and was seen on CCTV wearing an orange hooded jumper, blue jeans, white trainers and black face mask. He was also carrying a blue backpack.

He was seen lingering around Edward Street for much of the morning, sometimes drawing on a notepad. He was also seen entering the Sainsbury’s store in Old Steine where he bought a fruit salad – this was later found at the scene of the attack in Steine Gardens.

‘We want to give her every chance to get back to a normal life and continue with her work.’

Launching a fundraiser for her sister wrote: ‘Six months on, we have a clearer view of Rym’s current and future medical requirements which is why I am opening a donation page again.

‘Her injuries have turned out to be more serious than we expected at the time, and the full treatment unfortunately cannot be offered only by the NHS.

‘Rym has suffered severe injuries to her face, neck, chest and arms.

‘She’s still unable to see out of her right eye.

‘So far, she’s had seven operations including skin grafts to her neck and chest and operations to her eye.

‘Her doctors have said that she’ll need many more over the coming months and years.

‘This includes a reconstruction of her neck, specialised laser therapy for scarring and surgical needling.

‘I appreciate this is a really large sum of money, and I would be eternally grateful for anything you could give to help.’

She said: ‘Rym’s modest savings, having been an NHS junior doctor for only 10 months after her graduation, have been depleted.

‘Our parents have been the only financial support and continue to cover her medical needs and domestic expenses.

‘However, as a family, our funds are running low and we would really appreciate any help that we could get to give my sister her life back.’

In a statement read at Rouf’s sentencing at Lewes Crown Court Dr Alaoui said: ‘When I came to answer the door that day, a substance I now know to be sulphuric acid was thrown into my face.

‘Since the day I was subject to this horrific attack, my life has changed. I live in pain and fear of my future wellbeing and financial hardship.

‘The impact of the attack includes severe damage to my right eye which I am still unable to see out of. Damage to eye lids and damage to skin on face neck and arm.

‘I am unable to move my neck and close my eyelids. I have had five surgeries. I’m still trying to come to terms with more procedures and operation.

‘I am unable to attend work or live my life. I have been robbed of years of my career and young adult life. The psychological effect had been colossal on me my family and loved ones.

‘I can’t imagine how and why someone can commit such a premeditated attack.

‘The psychological effect of this attack has been colossal on me, my family and loved ones.

‘I cannot begin to imagine how or why someone would commit such a horrible, premeditated act.

‘It is impossible to fathom, find peace with or justify what was going on in his mind.’

Lewes Crown Court heard Rouf and Dr Alaoui had dated for a few months while they both studied medicine at Cardiff University.

However due to Covid they were unable to see much of each other and in March Dr Alaoui ended the relationship with him.

Dr Alaoui graduated and secured a position as a junior doctor at the Royal Sussex County Hospital in Brighton, East Sussex.

But her embittered former boyfriend hatched a plot to get his revenge on her for ending the relationship. 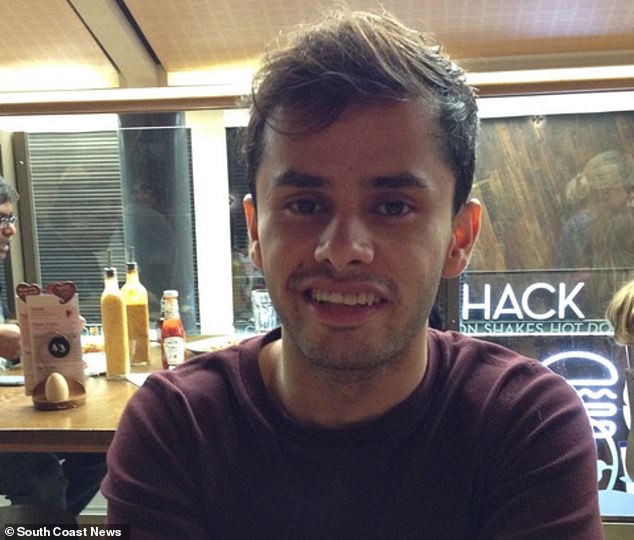 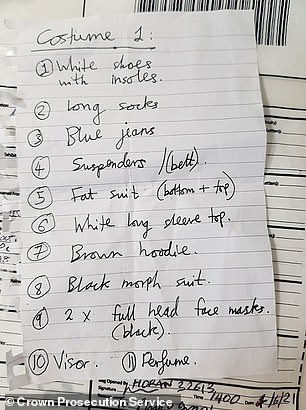 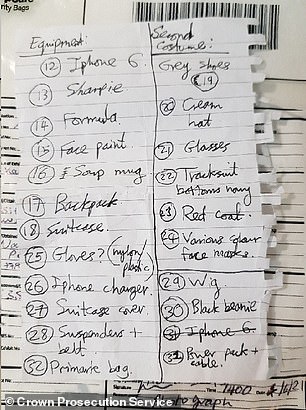 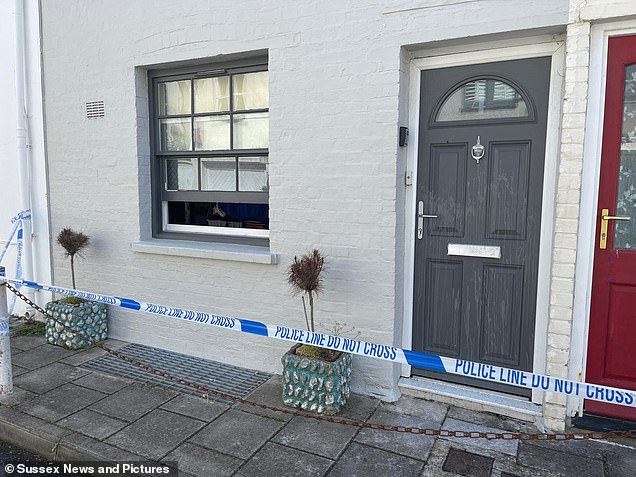 The noxious substance was thrown over Dr Alaoui on Steine Gardens in Brighton in May, and she was taken to hospital

Using padding, make-up and a mask to disguise himself as a woman, he carried sulphuric acid in a sealed in a soup mug and travelled from his family home in Eltham in London to Brighton.

He then waited near the house Dr Alaoui shared in Old Steine and at around 4.15pm he knocked on the door.

When she answered the door, she failed to recognise him and, without saying a word he threw the sulphuric acid at her and ran off.

Tests later conducted on the bottle found the sulphuric acid was at least 60% strength.

The family hope to raise £60,000 on their gofundme appeal to help pay for the doctor’s future treatment.

Last night the appeal had already raised more than £30,000.

Donations can be made at: https://www.gofundme.com/f/86a88-help-rym-recover-from-acid-attack-injuries.