The famous Yolngu actor, from Ramingining in Arnhem Land, and a member of the Mandjalpingu clan died on Monday.

For a man who defined Indigenous Australians in movies for half a century, it seemed fitting that Dalaithngu’s last known public farewell was delivered on film.

‘Thank you very much for watching me,’ the 66-year-old actor said in a 2019 video after receiving a lifetime achievement award from NAIDOC, the National Aborigines and Islanders Day Observance Committee. 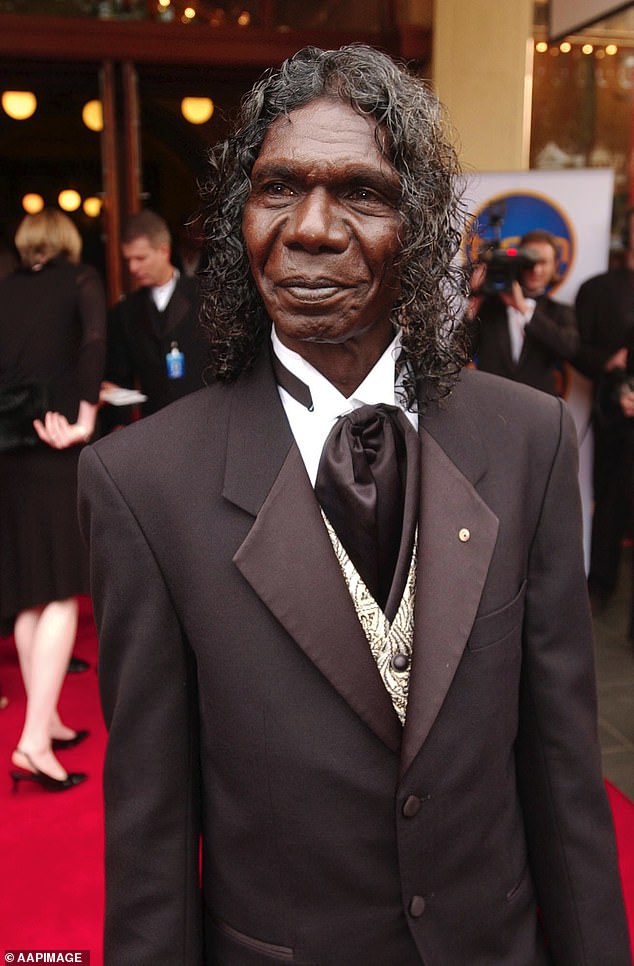 ‘One day soon he will go to the Dreamtime,’ said Phoebe Marson, fighting back tears.

Born at Maningrida in Arnhem Land on July 1, 1953, David Dalaithngu grew up among the Yolngu people, far from the white man’s world, becoming a skilled tracker, hunter and ceremonial dancer.

It was his ability as a dancer that gave him his big break as a 16-year-old. It brought him to the notice of visiting British filmmaker Nicolas Roeg, who handed him a leading role in the 1971 movie Walkabout.

The film and Dalaithngu were smash hits, and the actor travelled the world to promote the film, meeting famous entertainers like John Lennon and Bob Marley along the way.

He went on to star in a string of Australian box office hits including his “favourite” Storm Boy in 1976, The Last Wave a year later, Crocodile Dundee in 1986 and Rabbit-Proof Fence in 2002.

He also appeared in Baz Luhrmann’s Australia in 2008 after acclaimed performances in arthouse films got his stalled career back on track.

They included the 2002 movie The Tracker, which he considered his “best film,” portraying the relationship between white and Indigenous men in the early 1900s, as well as Ten Canoes in 2006, which showed Aboriginal culture before white settlement, and Charlie’s Country in 2013, which followed the demise of an Indigenous man.

The low-budget Ten Canoes, based on a traditional tale of love and revenge, won him a special jury prize at the Cannes Film Festival for best actor in innovative filmmaking.

Variety described him as “an actor capable of mischievousness and gravitas, often within the same shot” and Screen International said he had crowned his career with ‘a mesmeric portrait’.

Dalaithngu was appointed a Member of the Order of Australia in 1987 and was awarded the Centenary Medal in 2001. In 2005 he was named Northern Territory Australian of the year.

Twice he received the Australian Film Institute award for best actor in a leading role, for The Tracker and Charlie’s Country, and was nominated for best-supporting actor for Rabbit-Proof Fence.

He was nominated for a Helpmann Award in 2004 for best male actor in a play for the production Gulpilil.

He was also celebrated in art when Craig Ruddy’s portrait of him won the 2004 Archibald Prize.

But along with the accolades came problems with alcohol and depression, and a string of court appearances that landed him in jail twice.

In 2005 he lost his licence for a year; in 2009 he recorded a blood-alcohol reading of 0.147 but was let off because a magistrate ruled he only drove at the time to avoid possible violence.

In 2007 a Darwin magistrate dismissed a charge of being armed with an offensive weapon during a dispute, ruling that he carried a machete not as a weapon but a tool for carving didgeridoos and totem poles and building shelters in the bush.

But soon another magistrate imposed a 12-month domestic violence order on him, forbidding him from assaulting or threatening his second wife Miriam Ashley and ordering him to stay away from her while drinking.

Three years later came a more serious charge of aggravated assault against his wife; a court heard he had thrown a broom at her, fracturing her arm, because she would not get up off the floor and come to him while drinking at a house in Darwin.

He was found guilty and sentenced to 12 months in prison, suspended after five months.

Dalaithngu’s lawyer said Ms Ashley, who was in court, had since reconciled with her husband and regretted reporting the incident to police.

Dalaithngu had served an earlier prison term of a few weeks because of alcohol-related traffic offences, his lawyer said.

Dalaithngu wept in public after one court appearance, saying he wanted to get off the grog and make another movie.

He did just that, and in later years he returned to his roots as a tribal elder, whose people included his sons Jida and Jamie, mentoring youth, pursuing land claims and calling for compensation for the ‘stolen generations’ of Aboriginal children forcibly removed from their families.