A young Australian rapper has been thrown to the ground and arrested by a policeman who pressed his knee into his back and head.

Blake James Turnell, known by his stage name ChillinIT, was confronted at a shopping centre in Sydney because he was not wearing a mask.

The 28-year-old allegedly swore, though it was unclear whether it was at police or just in their vicinity, and was asked to provide his details.

Turnell said he didn’t have ID on him, and gave his name as David Johnson with a birthdate of February 1, 1997 – neither of which are correct.

The officer then accused him of providing false details and said he was under arrest, taking out a pair of handcuffs to restrain him.

The rapper’s mother, who filmed the whole encounter that he later posted on Instagram, expressed her outrage to the policeman.

Turnell mocked the officer as he was handcuffed, telling him to make the restraints ‘nice and tight’ as he continued filming with his other hand.

The policeman said he was resisting arrest and threw him to the ground in the middle of the shopping centre.

He claimed ‘this happens a lot because of who I am’, to which the cop replied ‘I don’t know who you are’, which Turnell mocked due to his popularity online.

After being frogmarched across part of the shopping centre, the handcuffed rapper started resisting and was suddenly thrown to the ground. 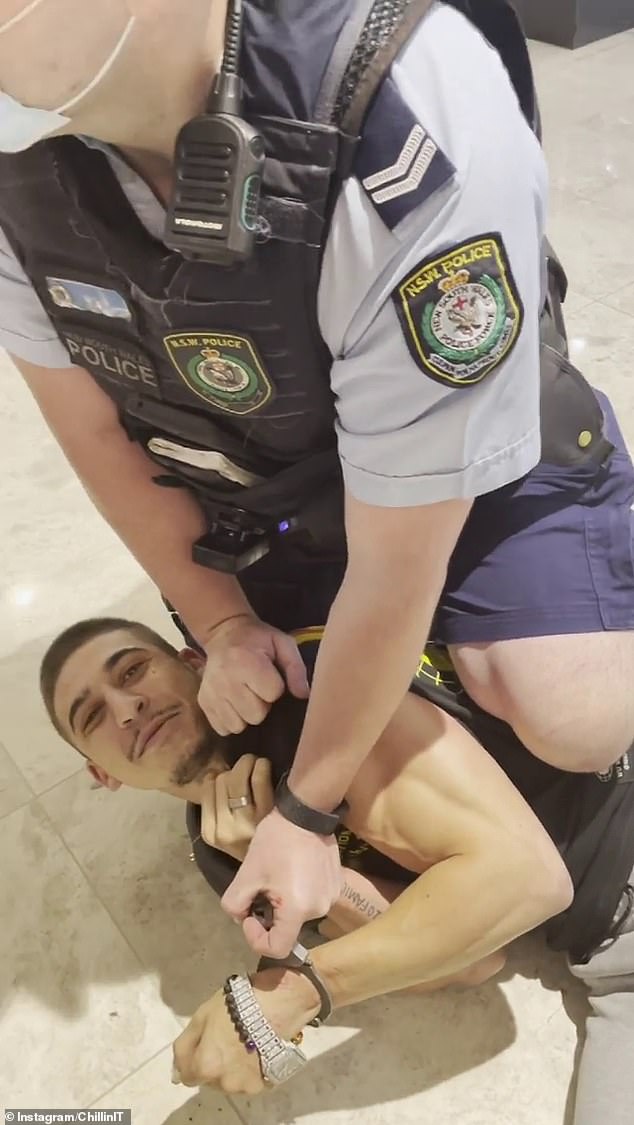 The policeman briefly pressed his knee into Turnell’s head to restrain him, before moving it on to his back.

‘You’re a nobody, you’re a maggot,’ the laughing Turnell mocked as he lay on the ground.

‘I’m trying to buy a Christmas present for my mum and you’re doing this? You’re disgusting.’

Turnell’s mother grew increasingly angry and demanded the officer get off her son and release him from custody.

‘I’m watching you every minute and you are being ridiculous… you’re carrying on like a turkey,’ she said.

Turnell was far less worried, telling his mother to relax because the policeman was ‘trying to be tough, just let him’ and mockingly telling the cop to push harder with his knee.

‘Let him… I hope he loses his job, we’ve got it all on camera… he’s weak,’ he continued while laughing

‘You’re 30-something and you couldn’t even get my handcuffs on. I hope you feel good doing this to a mother and a son out Christmas shopping.

‘Look at you trying to break my wrist you weak little b***h.’