Anthony Albanese brutally trolled Scott Morrison as he donated a basket of gifts to the Salvation Army.

Although it was meant to be a bi-partisan show of support for the charity’s Kmart Wishing Tree Appeal, Mr Albanese couldn’t resist making a few political points. 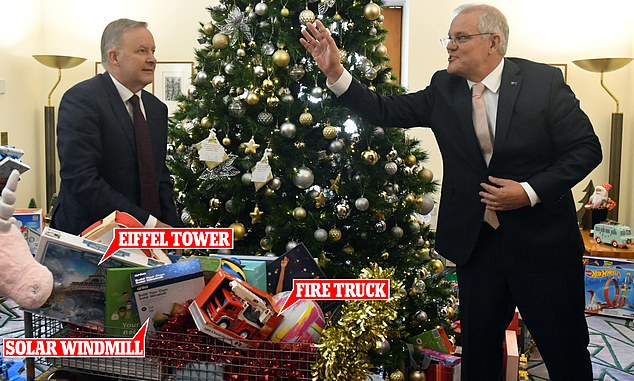 Mr Albanese donated an Eiffel Tower puzzle in apparent reference to Scott Morrison’s frosty relationship with France after the Prime Minister cancelled a major submarine deal with Paris in September.

The basket also featured a fire truck which may have been a reference to Mr Morrison infamously saying ‘I don’t hold a hose, mate’ when explaining why he went on holiday to Hawaii during the 2019 summer bushfires.

Also among Mr Albanese’s gifts was a solar windmill – a possible reference to how he has blasted the Government for announcing a net zero by 2050 target without any new policies to cut emissions. 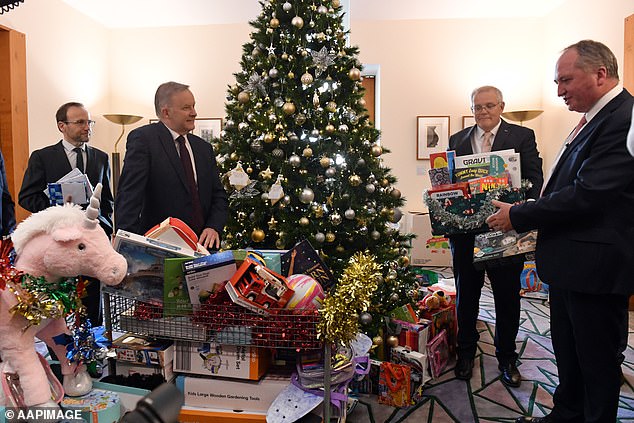 Mr Morrison made a brief comment about the gifts but did not mention the political ones.

‘An interesting mixture here. Albo’s got a unicorn. I’ve brought the GraviTrax. That got me through quite a few lockdowns this year, I’ve got to tell you, as others went through puzzles and various other things,’ he said.

‘This weekend, I’m putting the lights up on the house. I’m looking forward to that and the ritual with the girls and with Jen, and I’m wishing everybody here a Merry Christmas,’ he added.

Minister for Women’s Economic Security Jane Hume said Mr Albanese’s stunt was ‘juvenile’ and called for him to apologise.

‘This is pretty juvenile trolling from the Labor Party that says more about Anthony Albanese’s priorities than anything else.

‘Anthony Albanese should apologise to Kmart and the Salvation Army for using their charity for cheap sniggering,’ she said.

The The Kmart Wishing Tree Appeal was set up 34 years ago by the Salvation Army in a bid to make sure disadvantaged children and adults get Christmas presents.

Aussies can donate gifts at their local Kmart store. 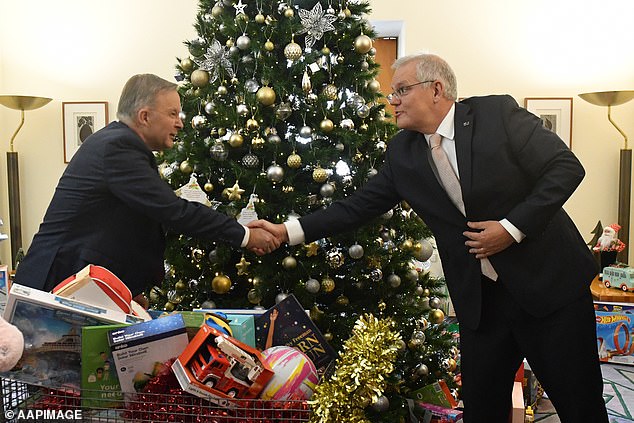