The words are shocking to those who had no idea what really went on in the most halls of power in Parliament House, Canberra.

‘I was sexually harassed multiple times, sexually assaulted, bullied and terrorised,’ a witness recalls of her time spent working in Australia’s most famous building.

The statement was part of a damning 456-page report by Sex Discrimination Commissioner Kate Jenkins which has revealed to the outside world what those in the parliamentary bubble were already all too aware of – young women were treated like ‘fresh meat’.

The anonymous person, who gave evidence to the inquiry, continued: ‘I was told that if I ever sought help or spoke about what happened to me my professional reputation and personal life would be destroyed.’ 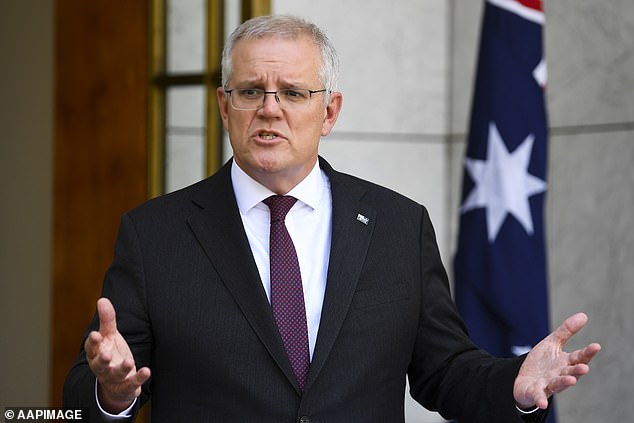 The report, which included input from 1,723 people, is a shocking indictment of what happens in a workplace where most people would hope the highest of standards – both legal and moral – were maintained.

Young women are seen as a ‘challenge’, people cry in the toilets rather than be seen to be upset and one third of workers in the building are sexually harassed.

One in four of those who were sexually harassed said it was by a politician.

Another respondent referred to ‘Aspiring male politicians who thought nothing of, in one case, picking you up, kissing you on the lips, lifting you up, touching you, pats on the bottom, comments about appearance, you know, the usual … the culture allowed it.’ 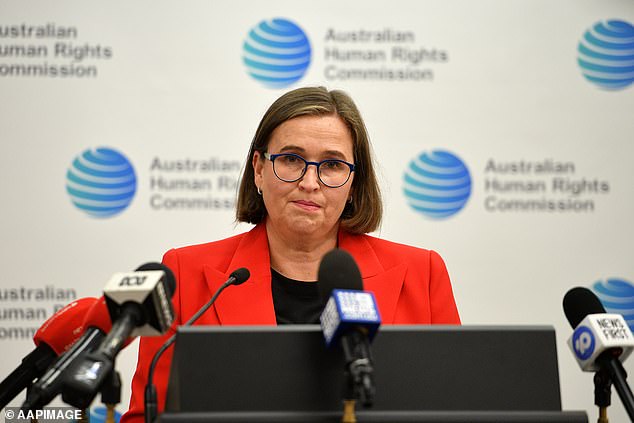 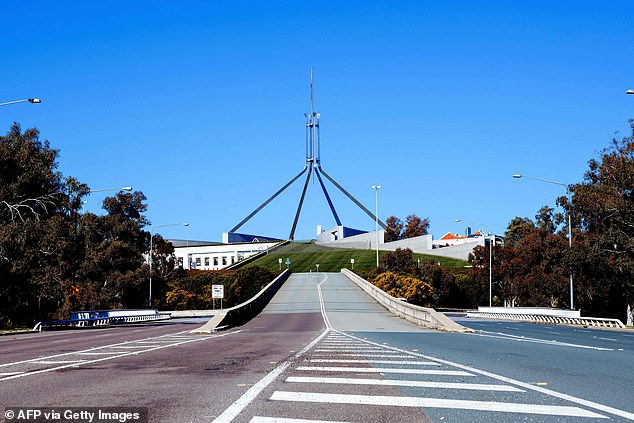 Parliament House (pictured) in Canberra, has been shown to have a very seedy underbelly

The words of the victims speak for themselves. But they are anonymous, because despite what it is they are exposing, they still fear that doing so could mean losing their job or damage their future employment prospects.

Close to the start of the report, one participant says ‘This is for the most part, a bunch of people who work extraordinarily hard…

‘And the reason that they do it, is because they want to make the country a better place and because they truly believe that they can make a difference.’

These are noble words and aims, but almost everything that follows focusses on the very dark side of what happens inside Parliament House. 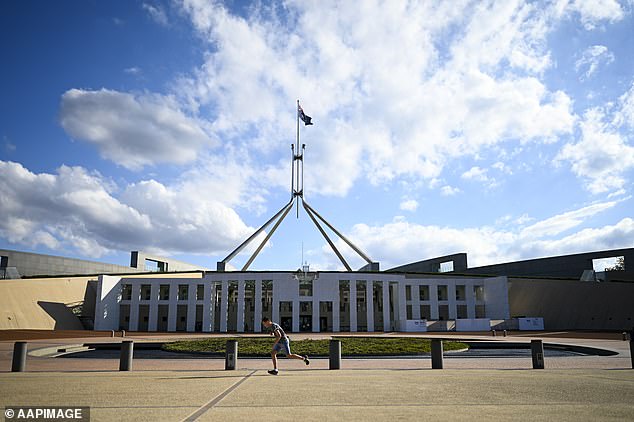 Parliament House (pictured) is expected by most people to hold the highest standards of employment. A shocking new report shows that it doesn’t

Staffers walk into the building starstruck and in awe at what they have achieved in their life to have secured a job there. One said: ‘The very first time I walked in there … we got into the Member’s Hall and … it was like … I work in Parliament House…

‘I actually teared up … It was just a pride to be able to work there because to me, that’s the ultimate place of public service.’

But it was a very different story when the same person left. ‘And can I tell you, when I left there … I would never, ever set foot in the place again.’ 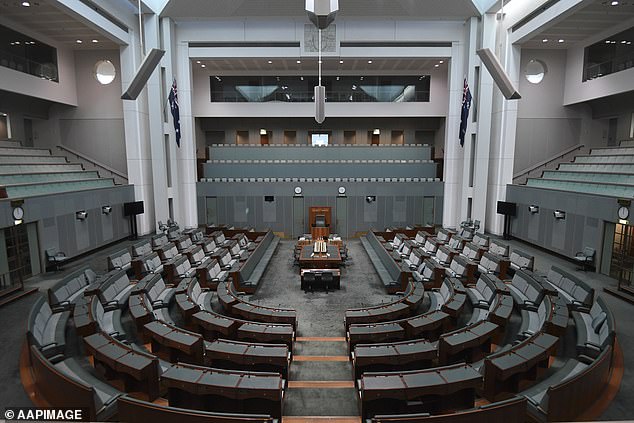 The empty chamber of the House of Representatives at Parliament House in Canberra. Staffers have revealed shocking stories of sexual harassment and sexual assault in the building

Some of the statements are heartbreaking because they show how accustomed staff became to what was happening around them.

‘Now that I look back on it, that is insane. And there is still a whole generation of people that work in politics that think that is normal, because they’re the ones who set those expectations.’

Another said Parliament House is ‘the most sexist place I’ve worked … there is a workplace culture of drinking’.

‘The boys are lads. And that behaviour is celebrated and … they do treat women, our female staffers and female admin staff, quite differently. Young women, particularly media advisers coming in, particularly the younger women coming in were like fresh meat and challenges.’ 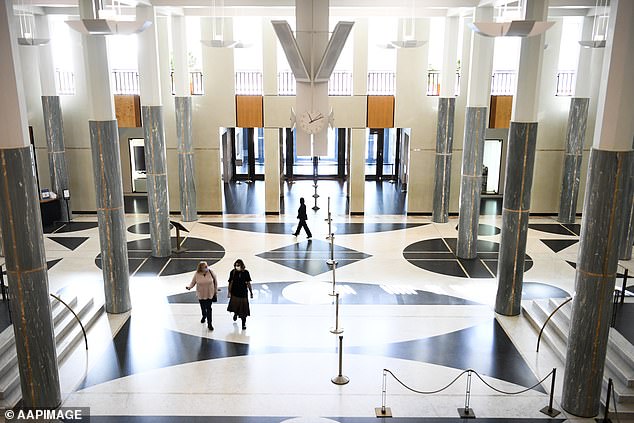 Members of the public wear face masks as they visit Parliament House in Canberra. They almost certainly had no idea of the extent of sexual harassment and assault in the building

One submission noted the experience of their co-workers with both Australian and visiting foreign politicians. ‘I have female colleagues who take fake binders to committee meetings so a male MP won’t try to kiss them,’ they said.

• Inherent focus on the pursuit and exercise of power

• Misuse of power and sense of entitlement

• Significant power inequalities, including between women and men, as well as power differentials running in multiple directions across multiple employers

• Insecure work and high levels of power and discretion in relation to employment, particularly by parliamentarians

‘I’ve had colleagues caressed by Senators in committee meetings in front of lots of people. I’ve had a junior colleague say she was groped by… MPs from another country and she didn’t want to make a fuss so put up with being their liaison for days.’

Another said: ‘MPs can run their office exactly as they like and they know that they don’t have to answer to anyone.

‘The power imbalance is just so blatant, it’s impossible to provide a safe working environment for staff.’

That power imbalance was made plain in the submission of another participant, who told the Commission a parliamentarian both sexually harassed and sexually assaulted her. ‘[He] actually put his hand up my skirt and tried to kiss me at that party. And it was quite disgusting.

‘And I was also told by state parliamentarians and members of the party constantly that they need young, sexy, attractive women in the … party … it’s just off, it really is off.’

Another woman described what happened to her at the hands of a politician as ‘humiliating’.

‘The MP sitting beside me leaned over. Also thinking he wanted to tell me something, I leaned in. He grabbed me and stuck his tongue down my throat.

‘The others all laughed. It was revolting and humiliating,’ she said. 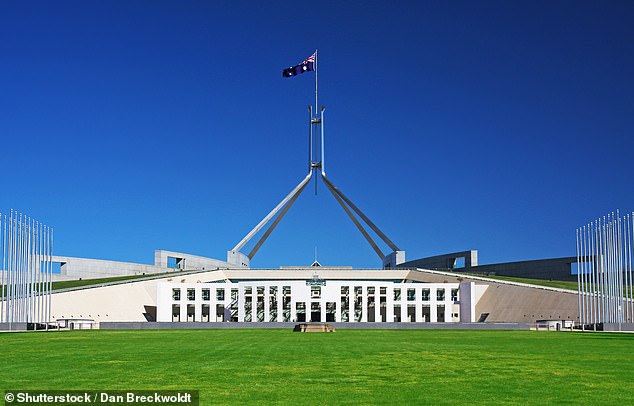 One in four parliament workers who experienced sexual harassment said they were harassed by a politician. Pictured: Parliament House in Canberra

And the actions have sometimes terrible consequences, as detailed by one of the respondents. ‘One tried to commit suicide, another admitted themselves into a mental facility.

Key stats in the report

‘I know three women that are still seeing psychologists. One had a marriage breakdown, and one has completely dislocated with her children as a result of the direct influence of that Member of Parliament … I will never work in a political office again, it’s not worth it,’ they said.

Prime Minister Scott Morrison said he was shocked but not surprised by the findings of the report.

‘Like anyone who works in this building, I find the statistics that are presented there, of course appalling and disturbing. I wish I found them more surprising. But I find them just as appalling,’ he said.

Ms Jenkins said she was not surprised because one in three Australian workers around the country suffer sexual harassment.

The report said bullying was made worse by a culture of working hard and long days.

‘Extreme expectations, long hours, small offices and office politics, and constantly proving one’s worth – was seen to foster environments in which people take their stress out on each other and bullying is accepted,’ Ms Jenkins wrote.

The seedy underbelly of what goes on in Parliament House has been laid bare for all to see. It remains to be seen if the 456-page report will change anything.

And if it does, how long will it stay changed? As one respondent said: ‘From the get-go there’s no incentive to actually report because it’s not going to change it and it’s probably actually going to make it worse.’ 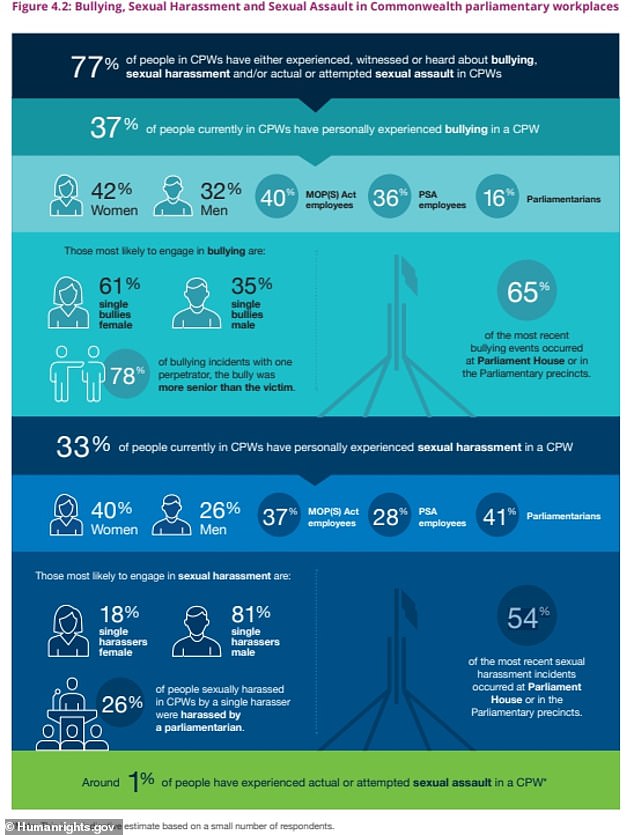