Fox News anchor Tucker Carlson described CNN’s Chris Cuomo as ‘illiterate’ and a ‘buffoon’ on Tuesday night – but accused the network of bowing to pressure with their decision to suspend him.

CNN at around 5pm on Tuesday announced they had suspended star anchor Chris Cuomo after acknowledging that he provided greater assistance to his brother Andrew over sexual misconduct allegations than he had previously admitted.

The network said that Cuomo, 51, was suspended indefinitely, with Anderson Cooper extending his hour-long show to two hours, to cover Chris’s 9pm slot. Cooper gave  a brief report on the story and read the network’s full statement about Cuomo’s suspension minutes before 9pm, when Cuomo Primetime would normally begin.

But over on Fox, Carlson was gleeful about the demise of one of CNN’s biggest stars, and spent 15 minutes on the topic.

‘Like most Americans, we never actually watched The Chris Cuomo Show – assuming that’s was its name,’ the 52-year-old said. 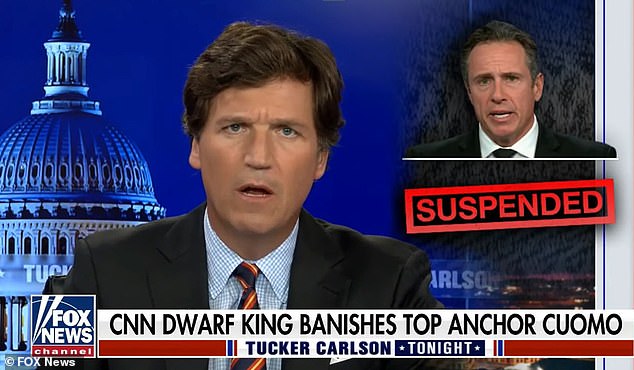 Tucker Carlson on Tuesday night called Chris Cuomo ‘illiterate’, and ‘an idiot’, but said he was right to defend his ‘loathsome’ brother, because he was family

‘But we saw clips and it transfixed us.

‘How, we wondered, how could a man who could barely speak English wind up with a paying job on television?

‘Some kind of weird affirmative action program for the illiterate?

‘We never figured it out. It was remarkable to see it.

‘Sentence after badly mangled sentence, a bouillabaisse of incomprehensible grammar – we couldn’t understand any of it.

‘It was a kind of performance art: a communicator wholly unable to communicate.’

He mocked Cuomo for his weightlifting obsession, and for being caught multiple times without a face mask, indoors and out – despite repeatedly stressing on air the importance of wearing one.

‘He was also, in the way that buffoons tend to be, incredibly self-righteous and false.’ 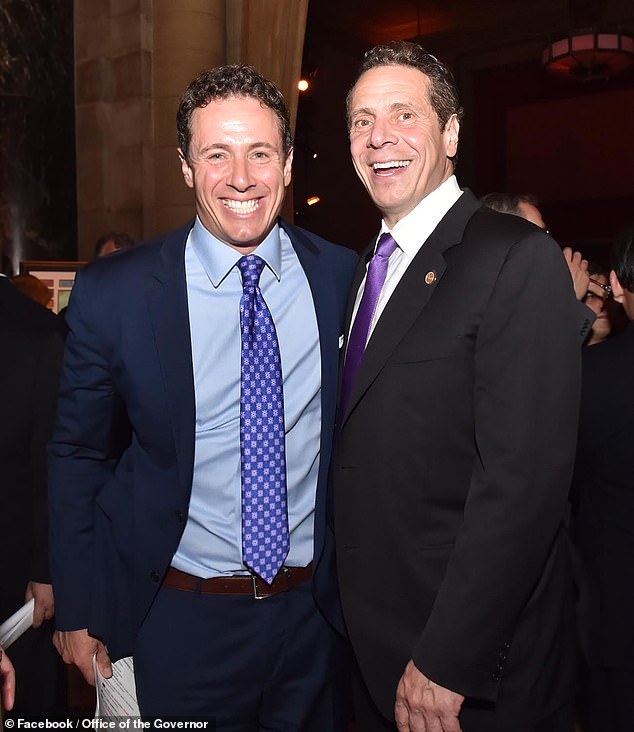 Chris Cuomo (left) is seen with his older brother Andrew, who was governor of New York until he resigned following a sexual harassment scandal in August

But, Carlson said, he was sad that Cuomo was forced out for defending his brother.

Carlson called Andrew Cuomo ‘loathsome’, but said Chris was right to defend him.

‘Your most basic obligation is to the people you are related to,’ said Carlson.

‘When they need your help – no matter who they are, even if you’re the governor of a state, even if they are horrible people – you help them anyway because it’s your family.

‘Chris Cuomo may be an idiot – and he is – but he understands that.

‘What a thing to be fired for.’

‘The documents, which we were not privy to before their release, raise serious questions.

‘When Chris admitted to us that he had offered advice to his brother’s staff, he broke our rules and we acknowledged that publicly.

Chris Cuomo on Monday night ignored the subject of his own communications with his brother Andrew and his team earlier this year, during the then-governor’s sexual harassment scandal

‘But we also appreciated the unique position he was in and understood his need to put family first, and job second.

‘However these documents point to a greater level of involvement in his brother’s efforts than we previously knew.

‘As a result we have suspended Chris indefinitely, pending further evaluation.’

Anderson Cooper filled in for Chris on Tuesday night, anchoring both his own and then Chris’s show, and read the statement from CNN out on air.

‘Some news, now, about this network – it involved Chris Cuomo, the host of Cuomo Prime Time,’ Cooper said, before reading the prepared remarks. 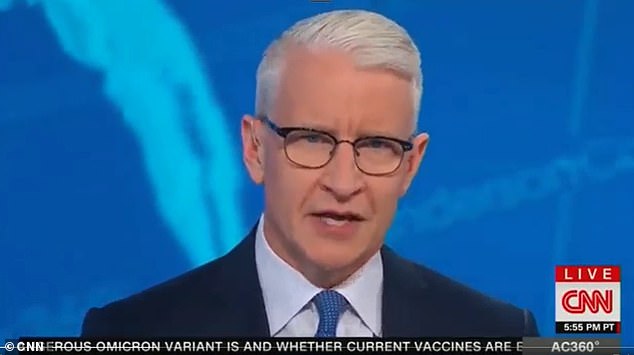 Anderson Cooper on Tuesday night filled in for Cuomo, and read the statement from the network

Ahead of taking over Chris Cuomo’s timeslot with a second hour of AC360, Anderson reads the statement from CNN on Cuomo’s indefinite suspension. pic.twitter.com/e7mRsWyJVP

He then handed over to Don Lemon – who went immediately to ‘breaking news’ of a Michigan school shooting, which happened several hours ago.

The night before, Lemon was effusive in his handover from Cuomo, saying: ‘It is good to see you, I know you had a great Thanksgiving, I hope that you did.

‘I missed you, I am grateful for your friendship and your love, I think that you are fantastic.

‘You are one of the kindest people I know on this planet, there you go, I meant every word.’

Erik Wemple, the Washington Post’s media critic, condemned CNN on Tuesday for their handling of the saga.

‘CNN could have gotten way ahead of Monday’s news cycle,’ he wrote.

‘Just like the investigators for the attorney general, it could have pressed its employee for everything about his involvement and then published the findings, along with any appropriate disciplinary action — you know, like a real news organization.

‘Instead, the network that prizes itself on covering breaking news is months late to a story sitting right in its own office.’

Cuomo, who hosts Cuomo Prime Time on the network, was revealed on Monday to have had extensive communications with the crisis team working for his embattled brother, former New York governor Andrew Cuomo.

Chris, 51, helped his 63-year-old brother’s team with inside information about forthcoming articles, and suggested how to handle the media response to allegations made by 12 women of sexual harassment.

The news anchor struggled this year to know how to handle the news, which broke in the spring and culminated with Andrew’s resignation in August.

At times he refused to cover it entirely, while in other moments he defended his actions. He also apologized once it emerged that he had been helping his brother on media strategy. 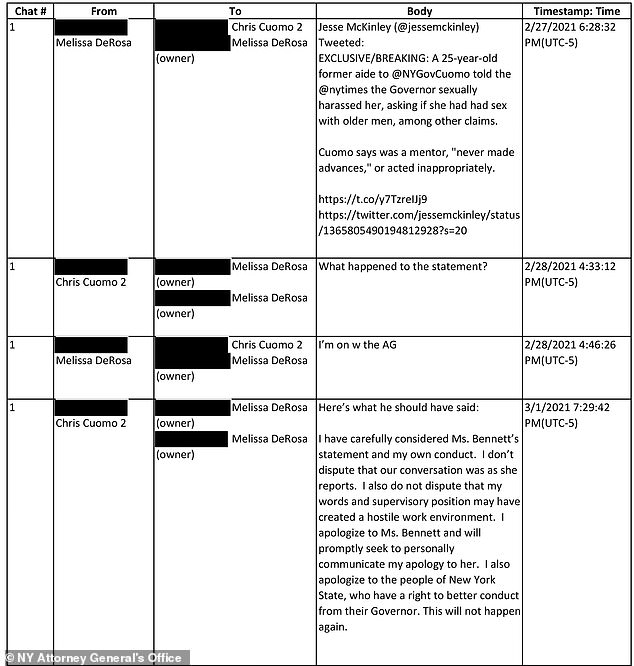 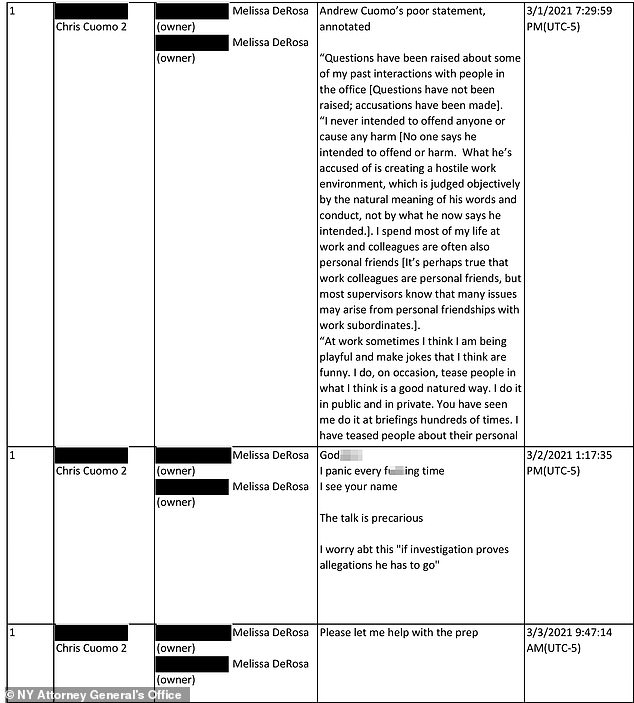 Pages of text exchanges between Chris Cuomo and Andrew Cuomo’s top aid Melissa DeRosa were released by the New York Attorney General’s office Monday. Investigators asked Cuomo during the investigation about a March 2021 text where he wrote to DeRosa: ‘If Ronan has nothing better – better than Boylan, that’s a great sign’

On March 1, Chris said that he was aware of the accusations about his brother, after a third woman came forward to accuse him.

But he said he could not report on it.

‘Obviously I am aware of what is going on with my brother,’ he said.

‘And obviously I cannot cover it because he is my brother. Now, of course CNN has to cover it. They have covered it extensively and they will continue to do so.’

He said he ‘always cared very deeply about these issues, and profoundly so.’

Several weeks of extremely uncomfortable handovers then ensued, as Chris refused to discuss the news – which at the time was a big story – while his co-hosts before and after discussed it extensively.

Despite having said he did not want to talk about it, when news of his assistance for his brother emerged in May, Chris apologized to viewers and colleagues.

On July 15, Chris testified before the attorney general’s team, explaining under oath the role he played.

‘How do I protect my family? How do I help protect him?’ he said during the session.

‘Probably should have been thinking more about how I protect myself, which just never occurred to me.’

When the New York attorney general’s report was published, on August 3, Chris Cuomo pointedly refused to discuss it – even while it was the lead item on his colleagues’ shows.

On August 16, shortly after Andrew resigned, Chris changed tack and addressed it again.

This time he defended his behavior, telling CNN viewers that he was not an adviser to the former governor, but rather: ‘I’m a brother.’

He added: ‘I never attacked nor encouraged anyone to attack any woman who came forward. I never made calls to the press about my brother’s situation.’

Chris’s stated intention of ignoring the story, and then being forced repeatedly to address it, has led to the anchor having a torrid year, with frequent calls for him to be fired.