FIFA 22 has released another SBC based along the lines of 75+ Player Pick SBC, but with significantly better rewards as the 83+ Player Pick SBC is now live in FIFA 22 Ultimate Team.

December has started a bit slower in regards to single-task SBC when compared to the month of November in FIFA 22. However, with the introduction of the Moments Duo SBC in Ultimate Team on December 1, FIFA 22 is on the right track when it comes to single-task SBCs.

Single-task SBCs have a passionate fanbase among FIFA 22 loyalists, given they are incredibly cheap and easy to complete. Beginner players, who are priced out of complex SBCs, can always do SBCs like 83+ Player Pick with ease. As for the try-hards, they can reuse their fodder which has no other use in FIFA 22 Ultimate Team. 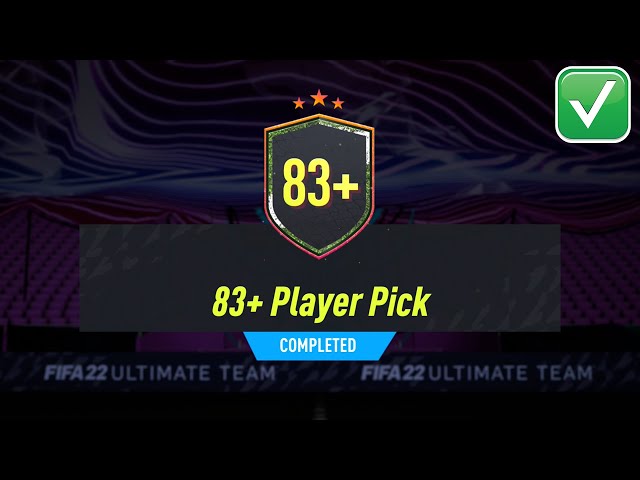 The 83+ Player Pick SBC, despite being in the initial stages, needs approximately 13500 coins to complete it from scratch. FIFA 22 players can always utilize the fodder in their collection to significantly reduce the cost of completion.

The chosen player item will then be added to their FIFA 22 Ultimate Team collection. For those FIFA 22 players who are interested in the 83+ Player Pick SBC, they have less than 24 hours to complete the SBC.

Review of the 83+ Player Pick SBC

As mentioned earlier, November was the peak month of great single-task SBCs in FIFA 22. It started with the SBCs that were part of the Rulebreakers promo and then the Adidas Numbers up promo. The release on the occasion of Black Friday was a mixed bag. So how is the 83+ Player Pick SBC based on its costs and rewards?

Go ahead and craft this for a chance at a SS or Best of TOTW! #FIFA22

Daily Content Review pt.3: – 83+ Player Pick SBC (untradeable) Go ahead and craft this for a chance at a SS or Best of TOTW! #FIFA22 https://t.co/UhW8VYptfa

The 83+ Player Pick SBC is definitely a good SBC to complete when the rewards are taken into account. However, there are a few caveats for the SBC.

First, the SBC could have had a longer period of completion since there aren’t too many ongoing SBCs in FIFA 22 at the moment. Second, the costs could also be slightly lesser. Finally, the 83+ Player Pick SBC would have been so much better if it had been repeatable like the 75+ Player Pick SBC.