Michael Jordan has a perfect record in the NBA Finals. In six appearances, he won six championships and was the Finals MVP every single time. Jordan was truly a clutch player, taking control in most of the crucial phases of the game.

Reaching the playoffs was never a problem for Michael Jordan, who did that in all of his seasons with the Chicago Bulls. However, breaking into the Eastern Conference Finals and NBA Finals took him some time.

In his fifth season with the Bulls, Michael Jordan reached the Eastern Conference Finals for the first time. They got there after beating the New York Knicks 4-2 in the 1989 Eastern Conference Semifinals. These match-ups, filled with talent and physicality, have always been exciting to watch.

On that note, let’s take a look at Michael Jordan’s three best performances in the Eastern Conference Finals.

On 27th May, 1996, the Chicago Bulls visited the Orlando Arena to take on the Orlando Magic in Game 4. The Bulls had won their first three games in the series and just needed one more win to progress to the NBA Finals.

Michael Jordan meant business the minute he stepped on the court, scoring 45 points from 16 made field goals, three coming from deep. 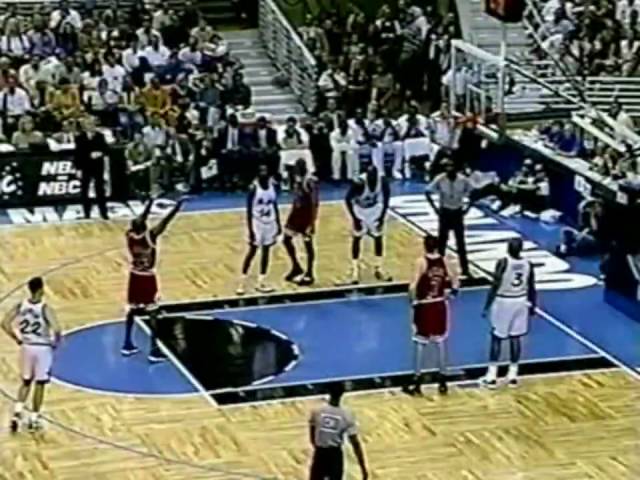 With that performance, Michael Jordan and the Chicago Bulls successfully completed a sweep in the 1996 Eastern Conference Finals.

In the 1988-89 regular season, Michael Jordan won the third scoring title of his career. He consistently recorded big scoring nights and was a tough cover. On 27th May, 1989, the Bulls entered Game 3 of the Eastern Conference Finals, with the series against the Detroit Pistons split at one a piece.

On a night where excellence was expected out of Michael Jordan, he delivered, scoring 46 points. He was the leading scorer of the game, shooting an efficient 61.5% from the field.

In the 1989 playoffs the Pistons went 15-2. Sweeping the Lakers, the Celtics, and the Bucks.

Their only 2 losses came from Michael Jordan & the Chicago Bulls.

On the other end of the floor, Michael Jordan was quick and responsive, forcing multiple turnovers. He had five steals in the fixture. Michael Jordan drew fouls consistently throughout the game and made 14 out of 15 free-throw attempts. It was a complete performance by Jordan, giving the Chicago Bulls a much-needed 2-1 advantage in the series.

Michael Jordan and the Chicago Bulls reached the 1993 Eastern Conference Finals comfortably, beating the Atlanta Hawks and the Cleveland Cavaliers without losing a single game.

In the next round, they faced the Patrick Ewing-led New York Knicks, who had one of their strongest regular-season showings. After three games, the Knicks led 2-1 and Game 4 was a must-win for the Chicago Bulls.

*The most points against the Knicks in a playoff game by any player — a record that still stands to this day.

On 31st May, 1993, Michael Jordan put on a show for the fans. Riding on a strong first-half, Jordan totaled 54 points, scoring 18 of his 30 field goal attempts. From deep, the Knicks could not slow him down as he scored 6 three-pointers throughout the game.

Michael Jordan shot an efficient 85.7% from the free-throw line, making it an all-round performance. Stepping up during a crucial game is something Jordan enjoyed and did with class on both ends of the floor.