Four in 10 Los Angeles residents have cited the city’s homelessness problem as a main cause for feeling unsafe in their communities, with one in five people saying they would consider moving to escape the problem, a new poll revealed.

The poll, which was conducted by the The Los Angeles Times and the ​​city’s Business Council Institute and surveyed 906 registered voters, revealed that many LA County residents were disappointed with regional leadership, rising senses of disorder and routinely finding urine and feces in the streets.

The poll-takers also expressed concern for the safety of their children.

‘I didn’t feel safe over there, especially raising my children,’ said Amber Morino, a 35-year-old mother of seven, living in San Fernando Valley.

‘I am also considering moving out of the state because it’s so bad. Like, I just feel like every corner I turn here there are encampments — campers. It’s just terrible.’

Residents argued that homelessness is the top problem facing the county, with 94 percent of voters viewing it as a serious or very serious problem.

This comes as reports surfaced that approximately 1,500 people suffering from homelessness in LA County – which has a homeless population of nearly 64,000 people – died on the streets during the pandemic. 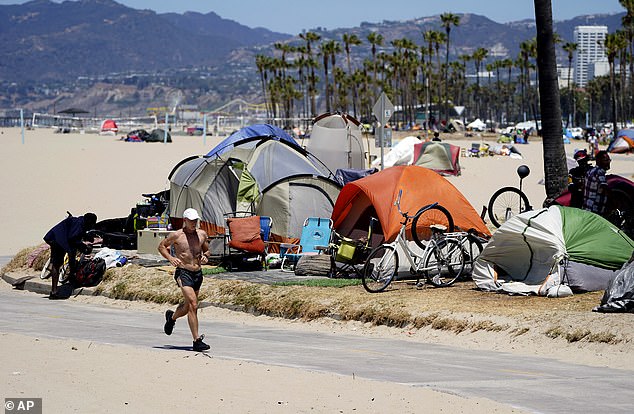 Four in 10 Los Angeles residents have cited the city’s homelessness problem as a main cause for feeling unsafe in their communities (Pictured: A homeless encampment in Venice Beach)

They also allege the homelessness problem has grown over the years.

Seventy-none percent of those surveyed said the problem has worsened, 7 percent said it improved and 13 percent indicated the problem stayed the same.

Some residents are even reporting crimes connected to problem.

‘I don’t resent them, I want the best for them,’ Lawrence ‘Drew’ Whitlock, 66, of Playa del Rey, told the newspaper. He claimed his home and vehicle have been burglarized and that a homeless person pulled a knife on him recently.

‘I would do whatever I can reasonably to help. But it’s interfering with the quality of my life.’

The majority of participants blamed societal problems as the root of the homelessness problem, with 60 percent of respondents citing the lack of affordable housing as the main cause. 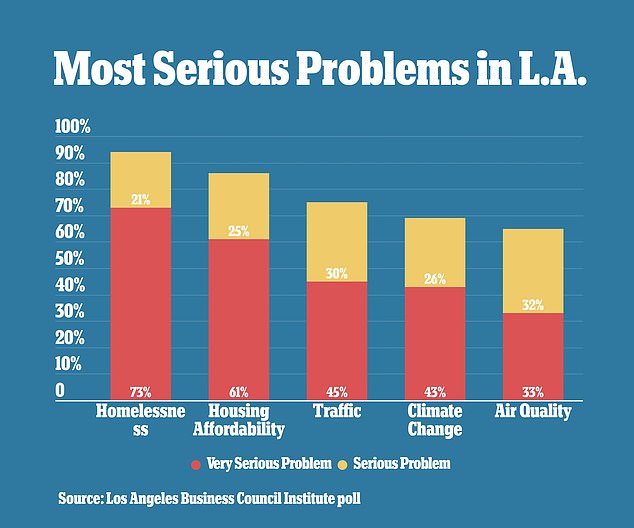 Residents argued that homelessness is the top problem facing the county, with 94 percent of voters viewing it as a serious or very serious problem 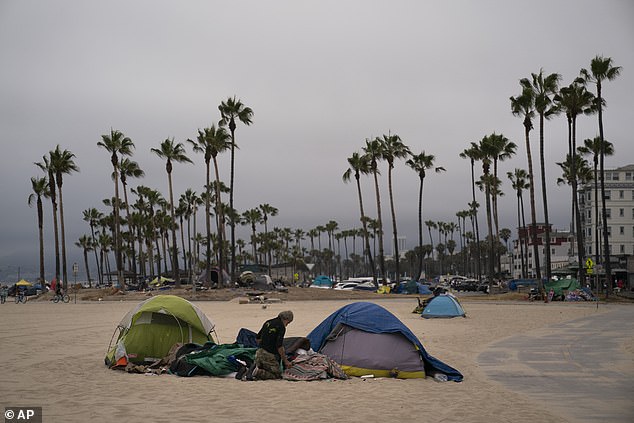 The majority of participants blamed societal problems as the root of the homelessness problem, with 60 percent of respondents citing the lack of affordable housing as the main cause (Pictured: Homeless camp in Venice Beach in June 2021)

Thirty-five percent argued that wages weren’t rising enough to keep up with increasing cost of living and 27 percent cited a lack of access to healthcare for physical and mental illnesses.

18 percent of people said homelessness was caused by an individual’s own actions.

Fifty-two percent argued that providing services to individuals in homeless encampments should be a higher priority to city leaders.

Mayor Eric Garcetti, who responded to the poll results, said the resounding pessimism about the problem is a reflection of everyone’s feelings.

‘I think it reflects how debilitated we all feel,’ he said. ‘How many years and how many new tents — even as we have successes — can we see in a neighborhood before we feel that we need some short-term places to stabilize people that are on the street?’ 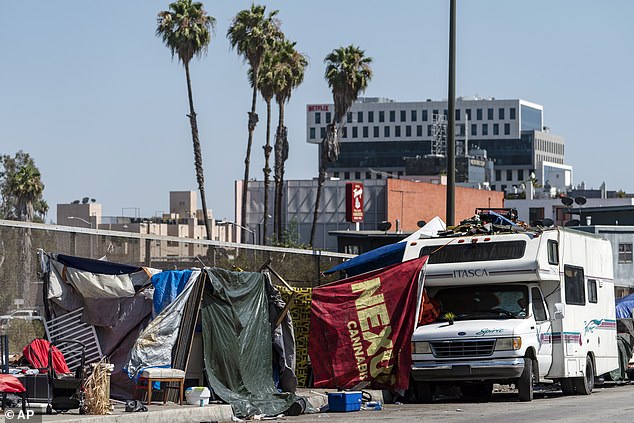 The poll also revealed that many LA County residents were disappointed with regional leadership, rising senses of disorder and routinely finding urine and feces in the streets (Pictured: Homeless encampments on an overpass of the Hollywood freeway in July 2021)

‘A lot of the mayors, governors, city people, they always say ‘vote for me, we’re going to get in the office and get the job done. We’re going to clean up this homeless problem, and you’re going to pay this amount of taxes,’ echoed Morino.

‘It’s like nothing has been done. The taxes have increased. …Our politicians need to step up and take some accountability for what’s happening in our streets.’

Nearly 75 percent of respondents argued that homelessness should be a ‘high priority’ for elected officials and that voters are  ‘close to the boiling point’.

Almost three-quarters of respondents said that homelessness should be the most important or a very strong priority for newly elected or reelected officials.

‘It’s not just that people aren’t happy with their leaders. It’s that they don’t really even know what they’re doing or who the leader is, who is supposed to do something about this crisis,’ said Aileen Cardona-Arroyo.

Meanwhile, there are at least 63,706 people experiencing homelessness in the county, according to a 2020 count from the Los Angeles Homeless Services Authority.

The population of homelessness increased 13 percent from the prior year. 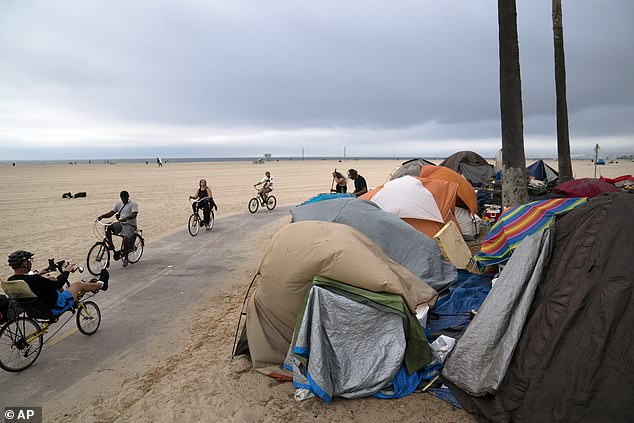 There are at least 63,706 people experiencing homelessness in the county, according to a 2020 count from the Los Angeles Homeless Services Authority

Researchers from the University of California, Los Angeles, studied data from the county coroner’s records and found that nearly 1,493 people experiencing homelessness died on the city’s streets between March 2020 and July 2021.

The most common cause of death among the alleged homeless population was an alcohol or drug overdose.

‘We are acutely aware of the limitations of coroner’s data – of how people are identified and counted, of the causes to which death is attributed, and the absences and silences in the data,” the report reads.

‘Our broader research endeavor is precisely a counterpoint to such dehumanization. Yet, we have felt the imperative to present this analysis of coroner’s data because it provides an understanding of key patterns and trends that are of direct relevance to the struggle for justice and freedom in Los Angeles.’

Additionally, the the homeless population accounts for less than a tenth of all crime in LA, according an ABC7 report analyzing 2020 and 2021 data from the crime-stricken city.

The news outlet added that the data suggested homeless people are victims of crime at about half the rate that they are suspects, but also noted the numbers were likely an undercount.