Thousands of young women who experience heavy periods are unknowingly suffering from a genetic disorder that puts them at high risk of life-threatening complications during childbirth.

Conditions that affect the blood’s ability to clot affect roughly 43,000 women in the UK, yet only just over a third have been diagnosed, according to the latest figures.

The best-known clotting disorder is haemophilia, which causes internal bleeding that is often severe, and although it is rare it primarily affects men.

However, women can also be carriers of the haemophilia gene and be mildly affected – something many doctors are unaware of.

There are other blood-clotting disorders that affect men and women equally that are more common but, paradoxically, are less well known.

While in men they often cause few symptoms, women who suffer them often experience problems with menstruation.

According to international studies, one in five women who seek medical advice for heavy periods will have a bleeding disorder but aren’t tested, which experts say is a missed opportunity.

Now, in an attempt to improve the level of diagnosis of bleeding disorders, experts are calling on GPs and doctors to ask a series of questions that will highlight telltale signs when patients complain of heavy or very long periods, including whether similar symptoms run in the family.

Gemma Gardner (pictured with daughter Summer), 42, is a case in point. Despite suffering heavy periods that left her ‘wiped out’ and bleeding for days after visiting the dentist, it wasn’t until her son was diagnosed with haemophilia at eight months old that her own problem was picked up

The Haemophilia Society has also launched an online symptom-checker questionnaire, aimed at encouraging women who suspect they might have an undiagnosed problem to visit a doctor and request the right tests.

Other telltale symptoms of an undiagnosed bleeding disorder include frequent bruising, nosebleeds or prolonged bleeding after dentistry. Serious problems may occur during or after surgery, which can lead to severe blood loss and problems with non-healing wounds.

Heavy periods are linked to anaemia, a lack of red blood cells in the body that leads to symptoms including debilitating exhaustion, feeling extremely cold and pale skin.

Women with bleeding disorders also often have complicated labours, with heavy bleeding. In extreme cases, this can prove fatal.

One sufferer, university lecturer Jo Traunter, was plagued by bruising and heavy periods, but wasn’t diagnosed until she was 37.

The mother-of-three from York, now 53, said: ‘I just thought it was normal to have periods that lasted ten days, because that’s what my mum had too. Women didn’t really talk openly about that sort of thing back then.’

Jo was diagnosed with the genetic bleeding condition von Willebrand disease shortly before she gave birth to her third child, by planned caesarean section.

She says: ‘The anaesthetist called me before I went in. He said he remembered the delivery of my second child, which was also a caesarean, and that I’d bled a lot which meant it was a difficult delivery. It was nine years before, so it must have been bad to stick in his mind. 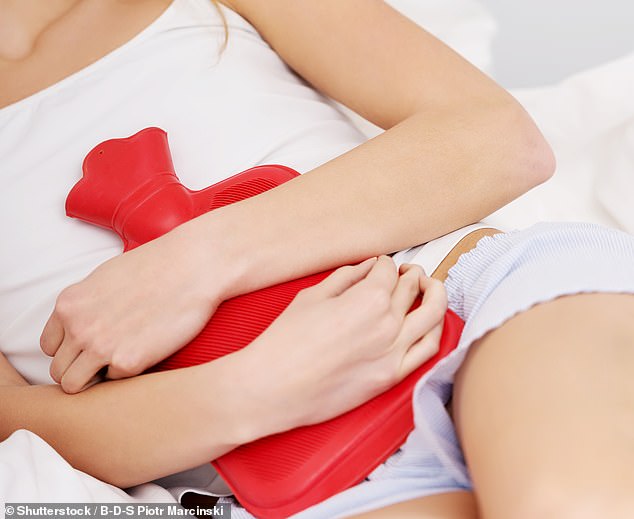 Periods that last for more than seven days, or the need to change period products in two hours or less, could indicate a problem

‘He suggested I attend a haematology clinic before my next C-section. I explained my symptoms and history and they basically told me on the spot they thought I had von Willebrand, which tests confirmed.

‘My subsequent C-section was even more complicated than the last, but this time, the haematology team were on hand to give the right medication, so I didn’t lose too much blood. The fact that they did probably saved my life.’

There are many different types of bleeding conditions, and all involve a deficiency of compounds in the blood that are vital for helping it to clot.

I’ve suddenly got painful spots on my back… what’s wrong with me?

Painful acne can affect any body part that has oil-secreting glands or hair follicles, at any age. Facial acne is common, but half of sufferers also get acne on their back, and in 15 per cent of patients the chest is affected.

Spots come in many forms, including papules, small red bumps that feel tender or sore, and pustules, similar to papules but with a white tip. Hair removal can trigger folliculitis – inflammation of hair follicles – which may require treatment with antibiotics.

Each condition differs in exactly which compounds are missing, meaning that tests to flag them up, and treatment, vary.

The most common is von Willebrand disease, which is thought to affect one in 1,000 people, with differing degrees of severity. Due to the type of deficiency involved, the condition doesn’t show up on standard GP blood tests.

‘Women with undiagnosed bleeding disorders like von Willebrand are at higher risk of bleeding during surgery, or childbirth, which can be dangerous,’ says Debra Pollard. ‘

But having heavy periods can be debilitating, and that’s why it’s important to get a diagnosis and treatment.

Periods that last for more than seven days, or the need to change period products in two hours or less, could indicate a problem.

Some women soak through bedding, or find they can’t go to long meetings because they’re worried they’ll need to change their tampon or pad.

‘But there are no real set definitions of heavy periods. Basically, if your periods are impacting your life, get them checked out.’

Bruising, which can be severe and appear with no discernible cause, can lead to difficulties too, she adds.

‘It is mainly cosmetic, but patients have said they avoided wearing short sleeves or a skirt in the summer because people will see bruises and make assumptions.

‘If we know there’s a problem, there are medicines we can give to help reduce risks and improve quality of life.

‘But many go undiagnosed and often say their symptoms are put down to ‘just one of those things’ – particularly if the problems seem to run in the family.’

Gemma Gardner, 42, is a case in point. Despite suffering heavy periods that left her ‘wiped out’ and bleeding for days after visiting the dentist, it wasn’t until her son was diagnosed with haemophilia at eight months old that her own problem was picked up.

Gemma, who works in social-media marketing and lives in Banbury with husband John, 43, and their children Summer, 14, and Zane, 11, says: ‘After Zane was born, he started to get these big, lumpy bruises all over his body for no reason, and tests showed he had haemophilia.

‘When Mum found out, she told me her great-grandfather died of haemophilia when he was 30. I had no idea.

‘The doctors suggested my daughter and I get tested, and we’ve been found to suffer mild deficiencies in clotting compounds in our blood.

‘Zane is severely affected, but has medication via a drip at home, which takes 15 minutes twice a week, and means he can live a normal life.

‘Summer and I don’t need medication, but we all carry cards that show we have bleeding disorders, so if we needed emergency surgery doctors would know to give special treatment. But I’m not on any regular medication, and luckily I’ve not had any problems so far.’

Jo Traunter, whose children are now 16, 26 and 28, was not so fortunate. Despite her haematology team being on hand for the birth of her third child, things didn’t go according to plan, and due to heavy bleeding she was given an emergency hysterectomy.

‘It’s an upsetting thing for any woman to go through, but I’m lucky that I survived, and that I have three healthy children.

‘I went to doctors so many times to try to find out why I was prone to heavy periods, bleeding and bruising but because standard tests didn’t flag up anything untoward, no one could find out why.

‘It was a relief to finally have an answer, and it worries me that there are so many women out there living with symptoms like I had, going without treatment.

‘It’s really vital that people get a diagnosis.’