The family of a young woman who was crushed to death between a water tank and a car driven by her fiancee say they are fearful for their safety after the killer moved interstate to Queensland – and will soon be living just metres from them.

Parolee Charles McKenzie Evans has flown from Sydney to enter two weeks’ quarantine in Queensland and then plans to live near the family of Alicia Little, who died when he struck her with his Toyota Hilux in 2017.

Alicia’s mother Lee Little exclusively revealed to Daily Mail Australia where and how close Evans, 48, will be to members of her family who know the offender and fear him.

Although he will be a 20 minute drive from Alicia’s close relatives, he will be living in a house less than a street away from the one member of Little family.

In 2019, Supreme Court Justice Lesley Taylor quoted the words Lee Little heard Evans say to her daughter just prior to her death, ‘bring your brothers, bring your uncles. I don’t care. I’m a f***ing Evans and I’ll go through the lot of them’.

Lee Little said her concerns for her family were coupled with questions of how authorities could ‘allow perpetrators of crimes to move from state to state’.

‘He’s been on dating sites since he got out of prison,’ she said.

After Alicia’s death, Evans was charged with murder, but ended up serving less than three years for danergous driving causing death and fail to render assistance. 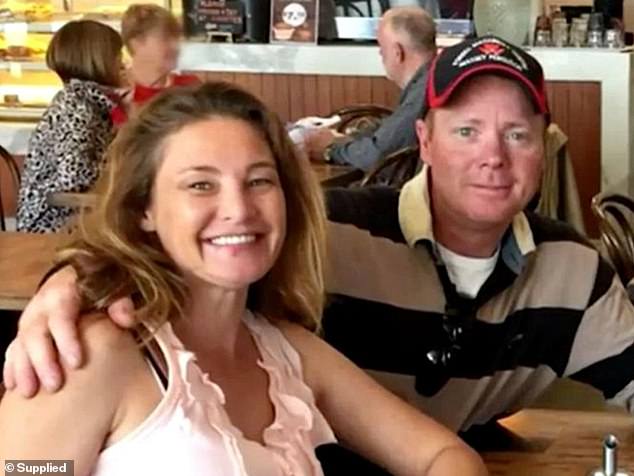 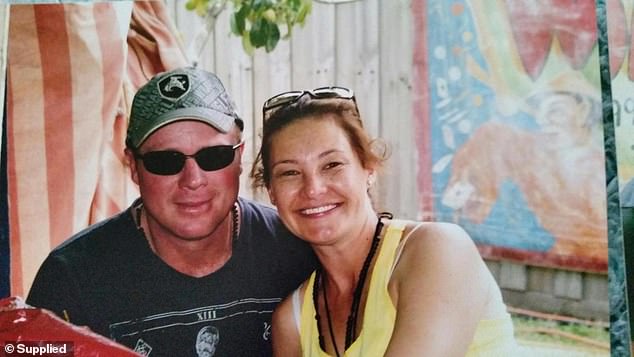 Alicia was packing up to leave Evans once and for all after Xmas 2017 when he crushed her between his car and a concrete water tank at Kyneton, northeast of Melbourne 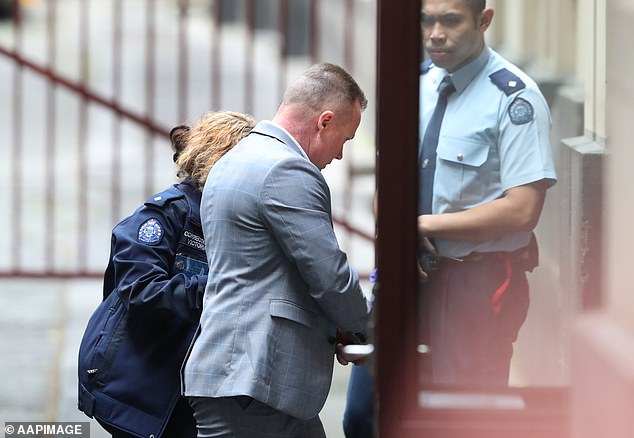 Although Evans and Ms Little were recently engaged in late 2017, following  Christmas Day with him, she was packing to leave him once and for all.

Sher had endured a volatile relationship with Evans, the Victoria Supreme Court heard, and had been admitted to hospital with injuries.

A Victorian judge would later note when sentencing Evans that his four-year relationship with Ms Little had ‘been marked by episodes of family violence’.

‘Ms Little told her mother by telephone that she was packing and that you were verbally abusing her. You could be heard in the background speaking abuse to Ms Little,’ Justice Lesley Taylor said.

At 3.41pm, she dialled Triple-0 to ask police to come and remove her ‘drunk and abusive’ partner of whom she was fearful.

Within less than an hour, Alicia was dead, aged 41.

Police were on their way out to the isolated farm at Kyneton in the Macedon Ranges, 95km from Melbourne when Evans ran his car into Alicia.

Police found the popular mother-of-four, a trained trapeze artist who shared with Evans a love of horses, foaming at the mouth as she died where she lay. 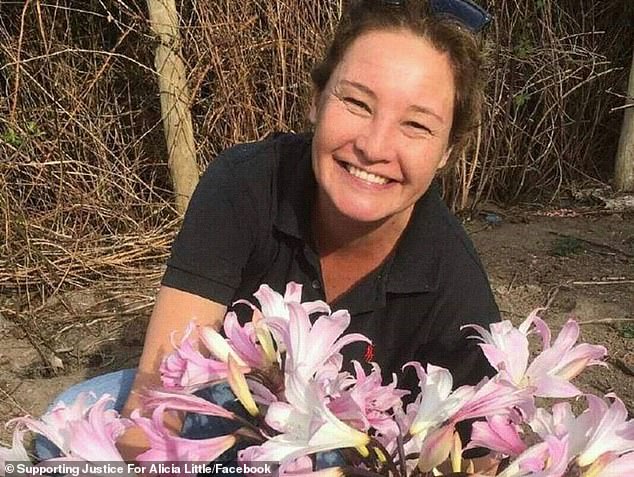 Police found the popular mother-of-four, a trained trapeze artist who shared with Evans a love of horses, foaming at the mouth as she died where she lay 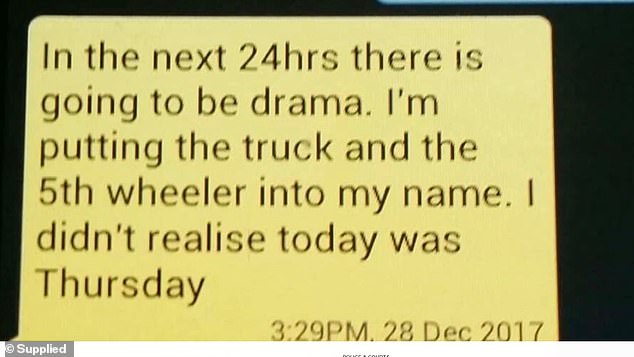 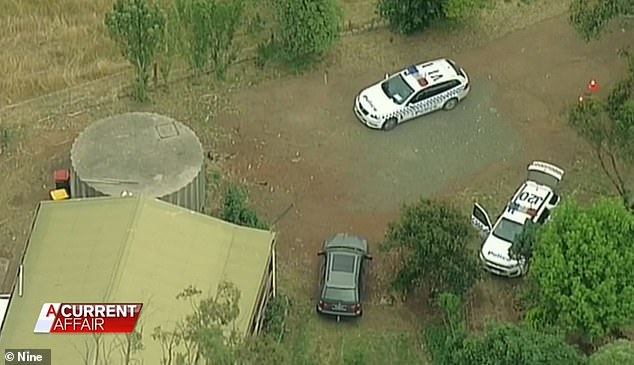 A court would later hear that Evans, angry at Alicia for calling police, had snatched her phone and got into his car.

When she went outside to get her phone back, he hit her with the Toyota HiLux at a speed of between 12 and 16km/h.

He fled the scene and would later claim Alicia had committed suicide.

An autopsy revealed Ms Little’s body had been crushed between his car and a concrete water tank, leaving her to die from severe blunt force trauma, massive internal haemorrhaging and a lacerated liver.

Lee Little received no further texts from her daughter that afternoon, then saw on TV news that a woman’s body has been found at Kyneton.

She felt sick and frantically texted Alicia, writing ‘Are you okay. Just seen tv’ and then ‘I’m trying to send you a msg. Are you ok’. 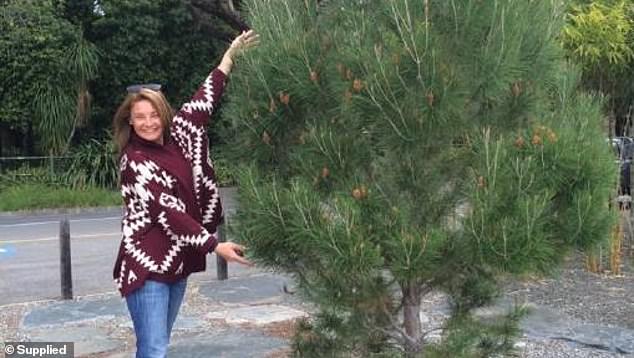 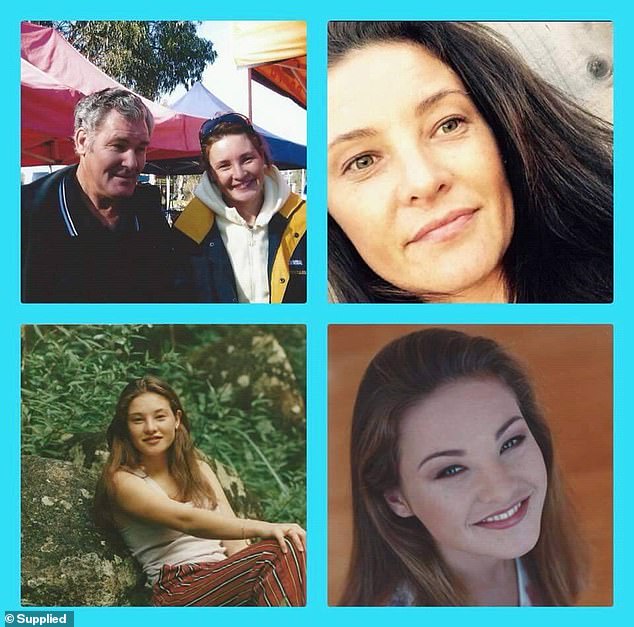 Lee Little, who compiled the above montage (top left, Alicia with her father) of pictures of her daughter, says she will never give up speaking her daughter’s name and telling her story

When Lee Little saw the Channel 7 news report that a woman had been killed on a Kyneton property, she ‘just knew it was my Alicia’.

Lee and family members drove 230km from their home to the property, where they embraced in grief as police explained nothing could be done for Alicia.

Police initially charged Evans with Ms Little’s murder, but in a deal with Victorian prosecutors the charge was dropped and Evans pleaded guilty to dangerous driving causing death and fail to render assistance.

Sentenced to a minimum two-and-half years in prison, with time served Evans qualified for parole in July last year after serving 32 months.

He applied to be transferred from Victoria to NSW for supervision during his remainder on parole, which expires in 2024.

On his release from Hopkins Correctional Centre in rural Victoria in August 2020, Evans crossed into NSW quarantine to live near his mother in the central western town of Forbes. 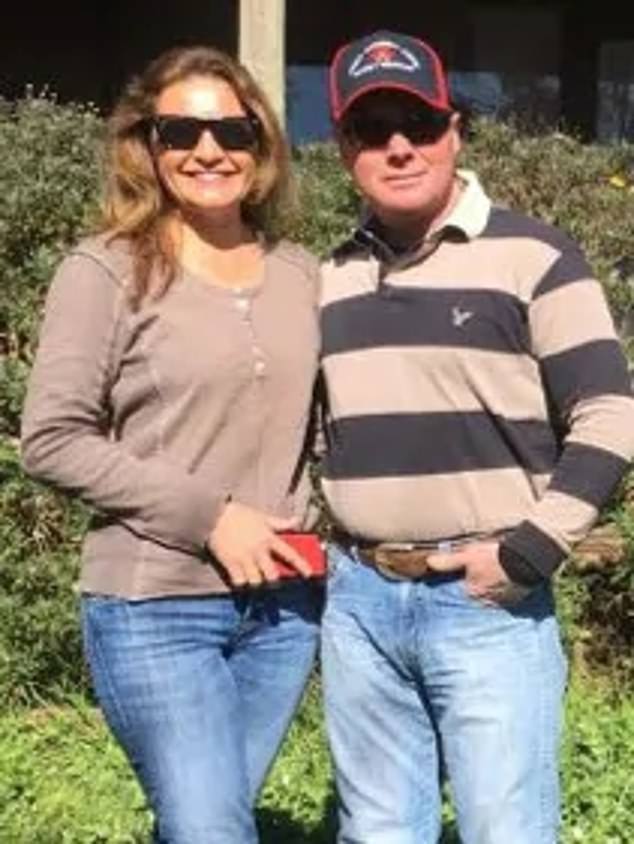 By late 2017, Alicia (above with Evans) had had enough and was determined to leave him, but he grabbed her phone and then struck her with his truck 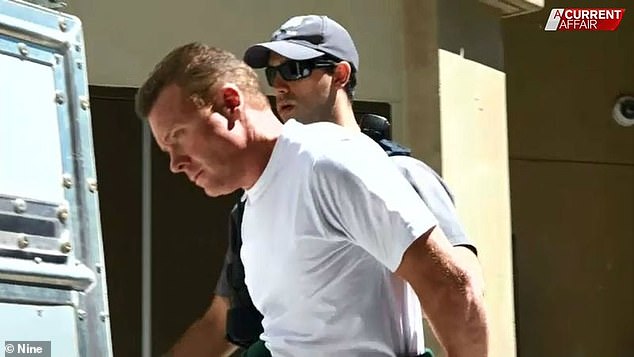 Charles Evans was released from prison in August 2018 after serving just 32 months for Alicia’s death, and has since moved states twice

While on parole in NSW, he launched his profile on the dating service Elite Singles, advertising his romantic interests as ‘love, happiness, friendship, chemistry’.

Evans has now left NSW to live in a small rural community located within the City of Logan.

Daily Mail Australia will not reveal Evan’s new address, but it is near Mt Tambourine in the Gold Coast hinterland

Lee Little questioned how the Queensland Government could let in former inmates on parole ‘when they don’t let children in or people to see their dying parents?’ 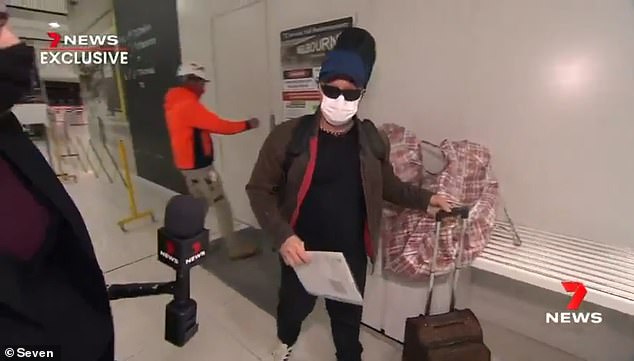 Charles Evans is again on the moving, having left NSW to enter quarantine in Queensland where he plans to live near Mt Tambourine

After his Victorian release, Evans was approached at Melbourne airport by Channel 7 which asked him if he had remorse for his actions.

Evans replied: ‘I’ve got nothing to say to you. Mental illness caused her death not me.’

Ms Little said because Evans had taken her daughter’s life and appeared remorseless, she ‘just needed for people to know about him – to know his name and to remember him.’