A vet clinic is on a mission to raise $150,000 to sue a militant vegan activist who stormed in and accused it of ‘animal slavery’ for having birds in cages.

The plant-based public figure along with her partner Jack Higgs accused the vets of ‘advertising animal slavery’ for displaying two birds in a cage outside their clinic.

Business owners Kay and Andrew McIntosh launched a GoFundMe page that aims to raise $150,000 they will use to finance civil action against Ms Peterson. 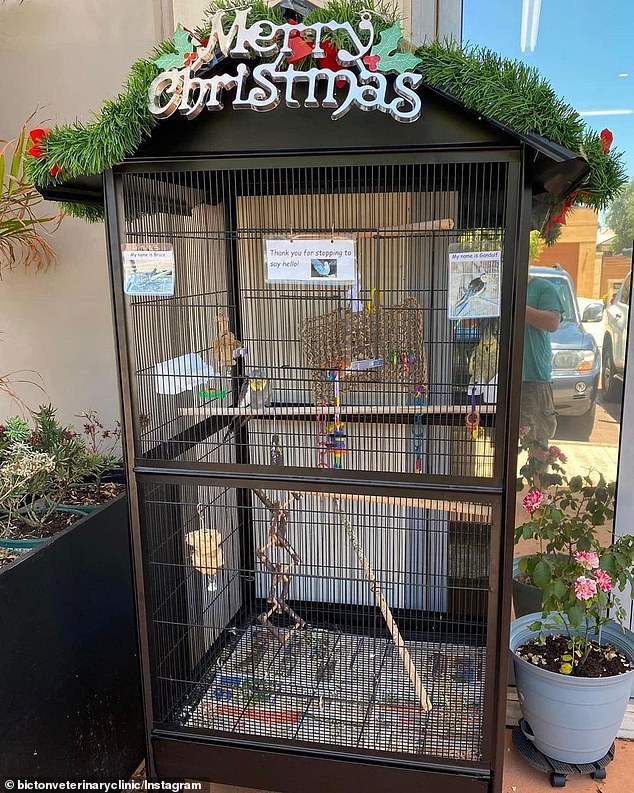 A vet clinic is on a mission to raise $150,000 to sue militant vegan activist Tash Peterson after she who stormed the business and accused it of ‘animal slavery’ for having birds in a cage

In footage of the tense standoff the activist tells a woman at the reception she doesn’t understand how a veterinary clinic could promote ‘animal slavery’.

‘It’s not animal slavery, and I appreciate your opinion, and that’s your opinion, but I’d like to ask you leave our premises, you are not welcome here,’ the employee replies.

‘I know who you are and I don’t want any trouble.’

The woman explains Gandalf and Bruce are captive birds and have lived in a cage for 14 years, and would not be able to look after themselves if she set them free.

She added they were in the process of finding the birds a bigger environment and while she appreciated Ms Peterson’s opinion, she would like her to leave. 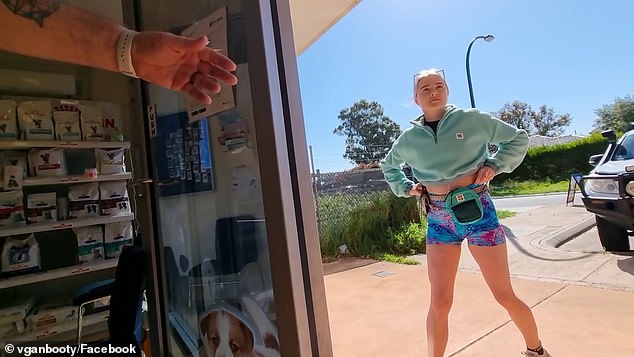 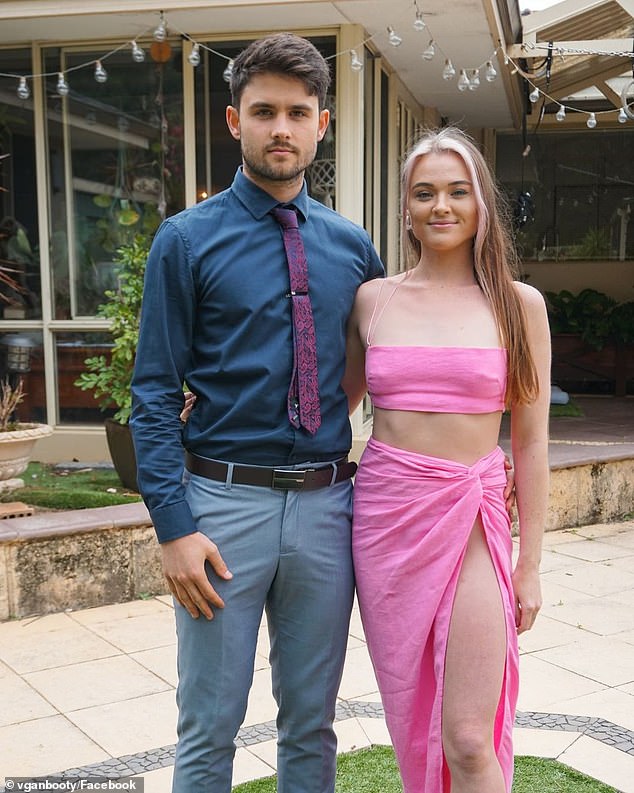 The notorious vegan then asks the employee if she is the type of vet who eats her own patients.

‘I don’t appreciate you enslaving animals and forcing them into murder factories, what if they were dogs?’ Ms Peterson continues.

The couple finally leave the clinic and are followed out by a male employee who stands in front of them as they attempt to film the cage again.

‘Do you have something to hide here?’ Ms Peterson asks.

The man accuses her of harassment and repeatedly asks the pair to leave.

The militant activist posted the footage on her Facebook page, revealing just 30 minutes after the confrontation she was visited by police.

She said she was issued a notice banning her from the clinic.

‘Birds should not be bred to to spend their entire lives in enslavement living in a cage,’ she captioned the video. 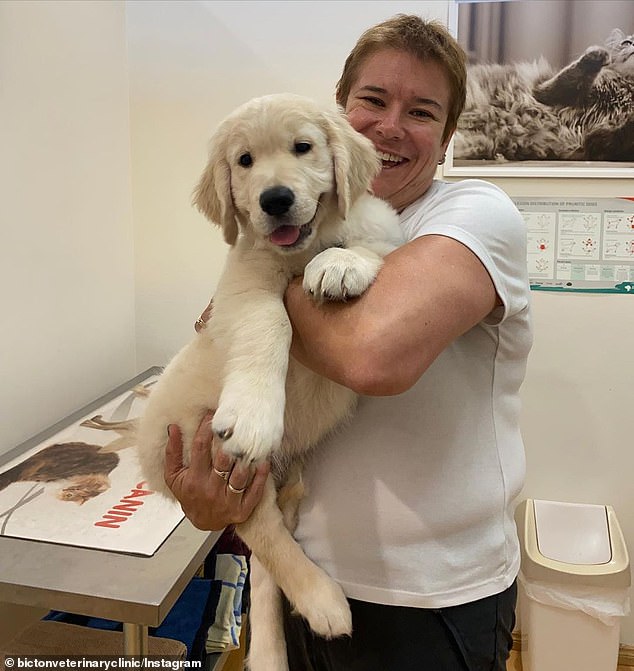 A GoFundMe campaign created by Dr Kay McIntosh (pictured) to raise money to finance the lawsuit has has received $2,440 of its goal of $150,000 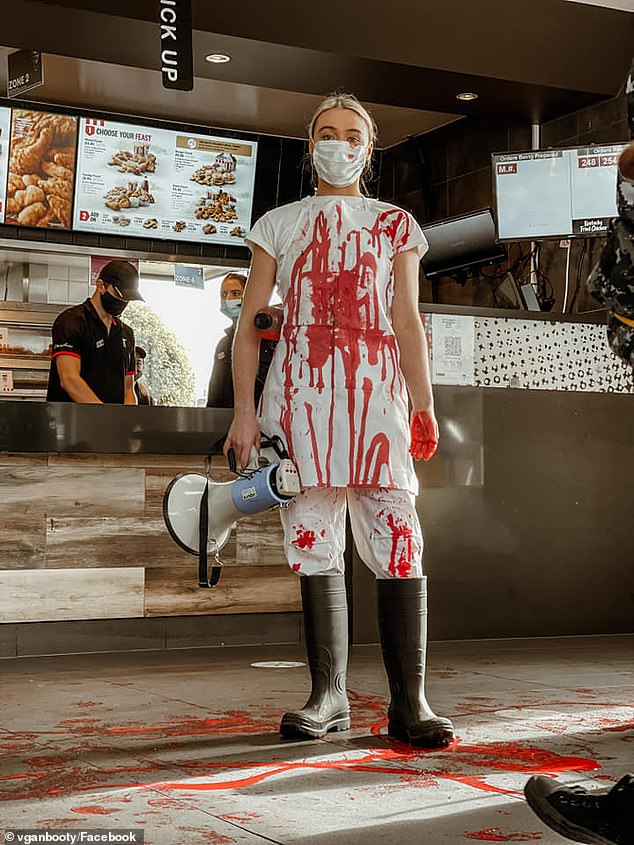 Ms Peterson recently stormed a KFC and yelled at diners with a megaphone, accusing them of being complicit in an ‘animal holocaust’ (pictured)

‘Seeing birds in a cage is so normalised, many find it difficult to see how immoral it is. Imagine if there were dogs instead of those birds; living just about their entire lives in a cage.

‘I am sure most would be outraged then. There is no moral difference, it is slavery.’

The clinic is now raising funds after launching defamation action against Ms Peterson, Mr Higgs and her business V-Gan Booty in the Supreme Court of Western Australia.

A GoFundMe campaign created by Ms McIntosh this weekend aims to raise $150,000 to finance a lawsuit and has so far received $2,440.

The fundraiser said Ms Peterson storming in and berating staff made several members of this clinic ‘extremely traumatised’.

‘Furthermore, this incident along with defamatory comments and innuendos has subsequently been published on Facebook to the detriment of our team members and our business,’ it read. 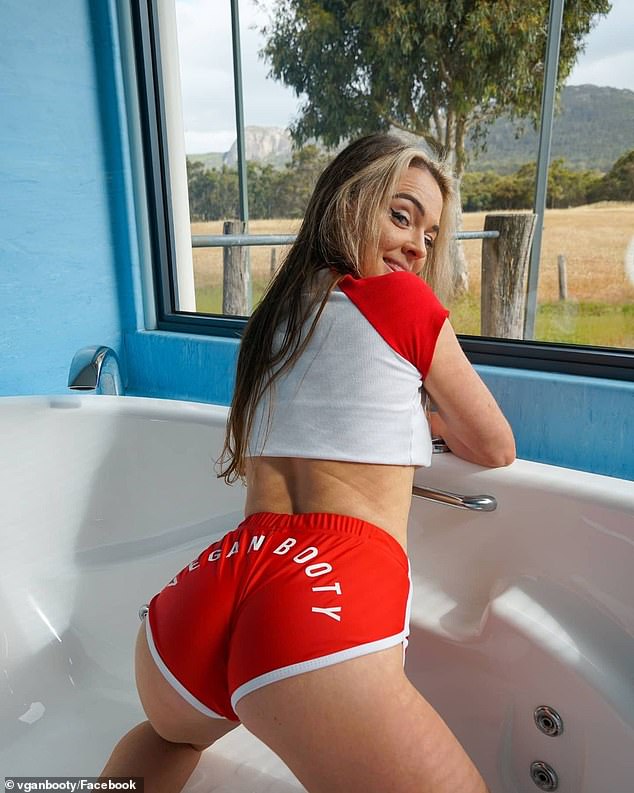 The 27-year-old (pictured) has become known for her shock-tactic demonstrations performed in food courts, butchers, meat isles in supermarkets and busy restaurants

Ms McIntosh explained the legal action was not about revenge but to hold Ms Peterson and her partner accountable for ‘harassment, intimidation and bullying’.

‘The veterinary industry is often a hard and unforgiving industry to those who work in it. It involves long hours, dedication, stress, has a high dropout rate of qualified veterinarians and veterinary nursing staff, and a high suicide rate,’ she wrote.

‘On average a person in the veterinary industry dies every 12 weeks. Even this veterinary clinic and its team members have not escaped with a recent suicide.’

Ms McIntosh stressed that making a donation did not entitle anyone to a share of any payout extracted from Ms Peterson, Mr Briggs, or their business.

The notorious vegan was just a few weeks ago ordered to leave by staff after storming into the Bathers Beach House in Fremantle.

Ms Peterson stood on a table as she and her fellow activists accused customers of being complicit ‘in the largest holocaust in human history’.

‘This is an emergency – the whole ocean is under threat. Fish are ripped from the ocean and brutally murdered,’ she told stunned diners inside the restaurant.

The bearded hotelier accused the 27-year-old of trespassing before approaching her cameraman and escorting him out onto the boardwalk.

The video emerged after Ms Peterson was slammed for comparing the abduction of four-year-old Cleo Smith to baby cows being taken from their mothers.

The belligerent animal rights extremist accused the Australian public of hypocrisy for celebrating Cleo’s rescue from a locked home in Carnarvon, Western Australia. 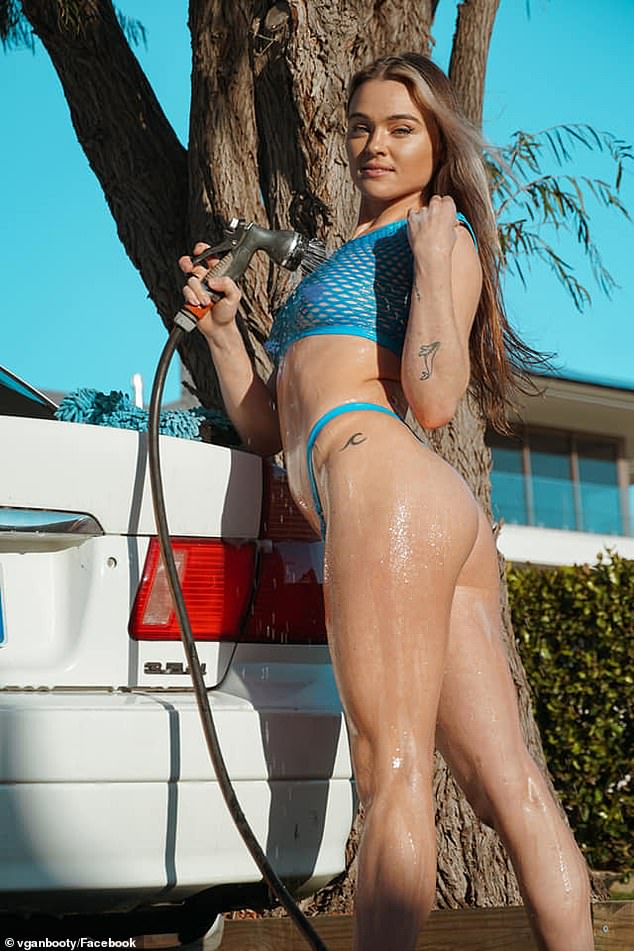 The plant-based influencer (pictured) has also dressed in bloodied aprons and stormed into restaurants and supermarkets like McDonald’s, KFC and Coles

The four-year-old was returned to mum Ellie and stepdad Jake Gliddon 18 days after she was kidnapped from a remote campsite during a family holiday.

Ms Peterson claimed abducting a child was no morally different to taking baby animals in the meat and dairy industry.

The 27-year-old has become known for her shock-tactic demonstrations performed in food courts, butchers, meat isles in supermarkets and busy restaurants.

She recently uploaded footage of police escorting her out of the Ascot Racecourse in Perth as she protested horse racing in front of a crowd of bemused punters.

The influencer has also dressed in bloodied aprons and stormed into restaurants and supermarkets like McDonald’s, KFC and Coles.