Stuart Scott was an American sportscaster who tragically passed away on January 4, 2015, due to appendiceal cancer. Scott’s last public appearance was on July 16, 2014, when he received the Jimmy V Award at the ESPY Awards for his ongoing battle against cancer.

Scott covered the NBA and the NFL during his time with ESPN. He stood out in his profession with his unique style of blending hip-hop culture and sports in a way that had never been seen before on television. As a result, Scott gained a following among younger sports fans.

According to former ESPN president John Skipper, Scott’s flair and style “changed everything” in sports commentary. Meanwhile, fellow ESPN anchor Stan Verrett said Scott was a trailblazer “not only because he was black… but because of his style, his demeanor, his presentation.”

Check out Stuart Scott’s iconic speech at the ESPY Awards below: 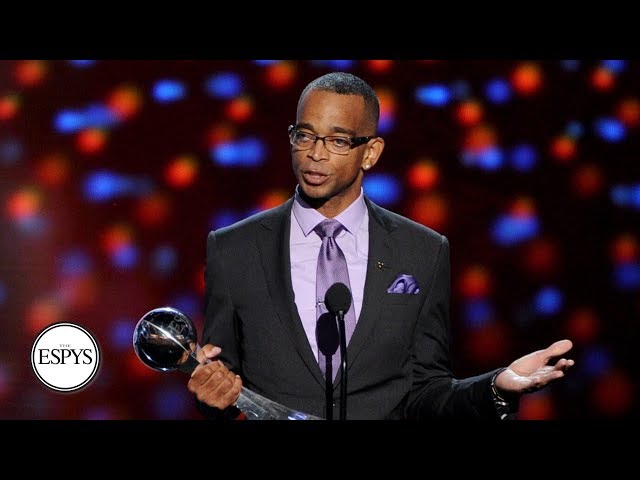 As part of ESPN’s 15th Annual V Week for Cancer Research, the leading sports media company dedicated content and programming to drive awareness and raise funds for the V Foundation.

The UFC teams up with ESPN to honor Stuart Scott

This year, the UFC has once again teamed up with its broadcast partner ESPN to dedicate a telecast titled “Fight Like Hell Night” in honor of Scott. The segment was inspired by Stuart’s remarkable “Fight like hell!” quote from his ESPY speech paired with his love of the UFC.

Tonight, @UFC is honoring Stuart Scott’s courageous spirit to ‘Fight Like Hell’! Tune into “Fight Like Hell” Night which will feature Stuart Scott-related content all throughout fight night and the UFC will be donating $100,000 to the Stuart Scott Memorial Cancer Research Fund.

Tonight, @UFC is honoring Stuart Scott’s courageous spirit to ‘Fight Like Hell’! Tune into “Fight Like Hell” Night which will feature Stuart Scott-related content all throughout fight night and the UFC will be donating $100,000 to the Stuart Scott Memorial Cancer Research Fund. https://t.co/FzyB0vPpkN

Earlier this year, the UFC lost a valued member of its community after hair and makeup stylist Suzy Friton lost her battle with breast cancer. The promotion also announced that, in honor of Friton’s life, they will be teaming up with V Foundation to support fight cancer and help those suffering from it.