Republicans are using the old tweets of two Biden nominees to try and stymie the president’s tech and telecom agenda.

Sen. Ted Cruz and other Republicans have dug into the backgrounds – and Twitter feeds – of two nominees who would serve at the Federal Communications Commission and the Federal Trade Commission.

And they’re pushing back against FCC nominee Gigi Sohn, who called Fox News ‘dangerous to our democracy,’ and FTC pick Alvaro Bedoya, who said the  Immigration and Customs Enforcement is an ‘out-of-control domestic surveillance agency.’

The pushback comes as Democrats are trying to regain voting majorities at the two agencies, which decide issues of net neutrality, competition and data privacy.

Republicans have successfully used tweets against Biden’s nominees before. In March, they sank Neera Tanden’s nomination to lead the Office of Management and Budget because of her old tweets.

Democrats could ram the nominations through but in the evenly divided 50-50 Senate, they would need every member of their party on board and Vice President Kamala Harris to cast the tie breaking vote. 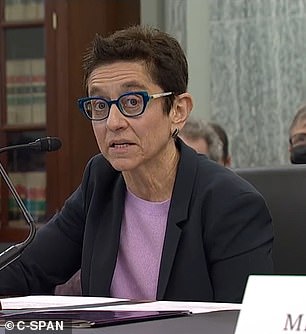 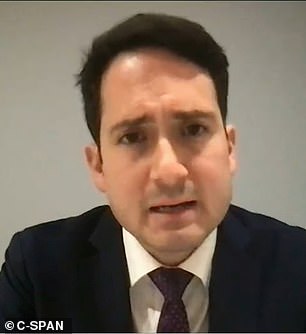 Republicans are pushing back on old tweets FCC nominee Gigi Sohn, who called Fox News ‘dangerous to our democracy,’ and from FTC pick Alvaro Bedoya, who said the Immigration and Customs Enforcement is an ‘out-of-control domestic surveillance agency’ 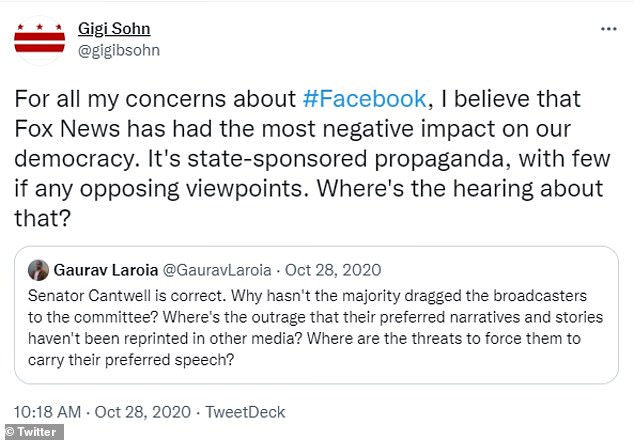 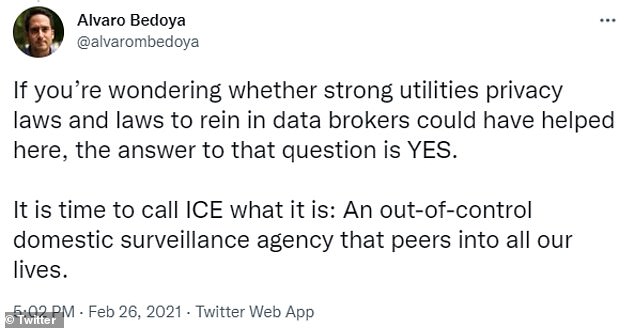 The Senate Commerce Committee deadlocked last week on Bedoya’s nomination and multiple Republicans told Politico they will put holds on Sohn if she advances to the Senate floor for a confirmation vote.

Many conservatives, including Fox News’ Tucker Carlson, have seized on some of Sohn’s past tweets to claim that she would use her position at the FCC to try to stifle conservative voices.

In a tweet last year, Sohn wrote: ‘For all my concerns about #Facebook, I believe that Fox News has had the most negative impact on our democracy. It’s state-sponsored propaganda, with few if any opposing viewpoints. Where’s the hearing about that?’

The Wall Street Journal, also owned by Fox News’ owner Rupert Murdoch, latched on to that tweet to write an op-ed opposing her nomination.

Cruz unveiled multiple poster boards of Sohn’s tweets at her confirmation hearing last week  and suggested they show her appetite for censoring conservatives.

‘You have multiple tweets going after Fox News very directly,’ the Texas Republican and frequent Fox News guest told her.

She defended herself, saying that ‘my opinions as a public interest advocate will have no bearing on how I behave as a policymaker if I am confirmed.’

Sohn is the co-founder of the public interest group Public Knowledge and a former senior staffer at the FCC. 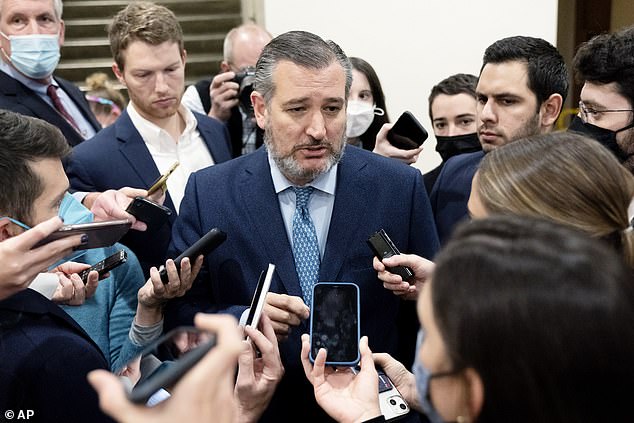 Sen. Ted Cruz is leading the charge against Biden’s nominees

The Senate Commerce Committee last week advanced the nomination of Jessica Rosenworcel to another term at the FCC.

Rosenworcel was appointed chairwoman of the agency in October. But without Sohn filling a fifth slot on the commission, the agency will be deadlocked 2-2 between Democrats and Republicans.

That would sideline some issues important to Democrats, like reinstating a new set of net neutrality rules.

But under Senate rules his nomination can proceed to the full Senate for a vote.

Cruz also blasted Bedoya’s old tweets, saying: ‘I see the record of someone who has been a left-wing activist, a provocateur, a bomb-thrower and an extremist.

Bedoya apologized and expressed regret for some past social media posts.

‘If confirmed, I am committed to serving as an unbiased and impartial commissioner,’ he told senators during his confirmation hearing.

Bedoya, a Georgetown University Law Center professor, is also a former chief counsel of the U.S. Senate Judiciary subcommittee on privacy, technology and the law.

He calls privacy ‘a civil right’ and has been skeptical of facial recognition software that he says often mistakes the faces of African Americans and women.

The FTC enforces antitrust law and pursues allegations of deceptive advertising. And it deals with pharmaceuticals – prescription drug prices have become a huge concern.

The agency is currently made up of Chairwoman Lina Khan, a Democrat, a second Democrat and two Republicans. The FTC cannot take any actions on a tie vote.