Conman Peter Foster has been arrested by police some six months after he allegedly skipped court.

In a statement, the Australian Federal Police said Foster, 59, was arrested near the Victorian town of Gisborne in the state’s Macedon Ranges after a six month search.

Foster failed to appear in a Sydney court on fraud-related charges in May and an electronic tracker stopped sending a signal.

His lawyer at the time admitted he had no idea where the 58-year-old was.

The case against Foster involves allegations he conned $1.7million in Bitcoin out of a retired pilot in Hong Kong as part of a sports betting scam.

Foster – using the alias Bill Dawson – allegedly promised a series of investors including pilot Konstantinos ‘Dino’ Stylianopoulosas ‘guaranteed returns’ on their money by having a mathematician predict the outcome of sports matches.

Prosecutors say Stylianopoulosas transferred Foster $2million in cryptocurrency over the course of nine months between 2019 and 2020, in amounts ranging from $126,000 to $890,000. 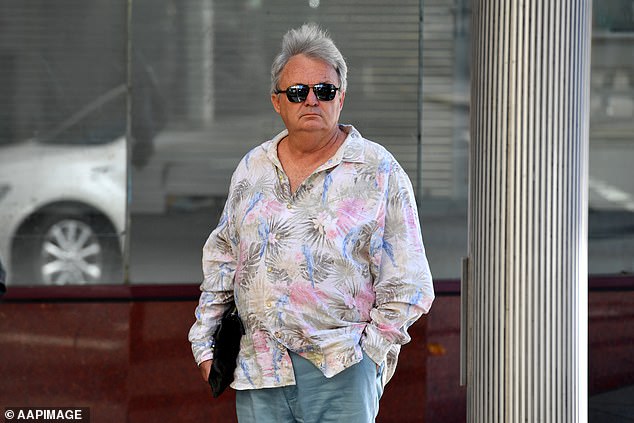 Foster outside court on April 22. The case against him involves allegations he conned $1.7million in Bitcoin out of a retired pilot in Hong Kong as part of a sports betting scam

But investors say their money ‘evaporated’ after they invested in the firm, called Sports Predictions, and prosecutors allege that no bets were ever placed and the money was instead diverted to Foster.

Police were tipped off about the alleged con after Stylianopoulosas contacted a team of investigators at IFW Global, who then worked with officers to track Foster down.

He was eventually tracked to far north Queensland where he was dramatically arrested in August last year.

Footage of the arrest, taken by IFW Global, showed two officers dressed as joggers running towards Foster on the beach before tackling him to the ground.

The case was then sent to NSW, because that is where the cryptocurrency exchange used for the transactions was based.

Foster was released on bail at that hearing but placed under effective house arrest and fitted with an electronic tag to return to court.

That hearing took place on May 20, with Foster’s lawyer Justin Lewis telling the court the pair had met in his office in Sydney that day at 11.30am.

Mr Lewis said Foster had assured him that he would turn up, but by 2pm he was nowhere to be seen and couldn’t be contacted because his bail conditions prohibit him from carrying a phone.